Pompey will look to stretch their unbeaten run to seven matches when they visit Bradford in this evening’s rescheduled fixture.

The game was originally scheduled to take place at the beginning of March, but fell victim to the ‘Beast from the East’.

Kenny Jackett’s side have seen a dramatic improvement in form since then and know that victory tonight would send them above Plymouth and Scunthorpe into fifth spot.

But while the Blues have been on the up in recent weeks, it is a vastly different story for their opponents.

The Bantams finished fifth last term, seeing off Fleetwood in the play-offs before conceding a late goal to lose to Millwall at Wembley.

They made a bright start to the current campaign and automatic promotion was still a distinct possibility at the turn of the year.

But City have won just once since New Year’s Day and fallen down to 13th in the standings – closer to the drop zone than the top six.

Stuart McCall departed as manager at the start of February, but replacement Simon Grayson has been unable to arrest the slide.

Bradford triumphed 1-0 when the sides met at Fratton Park earlier in the season, but Blues fans will have fond memories of the last Valley Parade clash.

Svetoslav Todorov grabbed a hat-trick, while Gianluca Festa and Steve Stone were also on target, as Pompey waved goodbye to Division One with a 5-0 rout in May 2003.

TEAM NEWS
Matty Kennedy is a doubt with the calf problem that kept him out of Saturday’s goalless draw at Plymouth.

Bradford skipper Romain Vincelot might not be able to shake off a knee injury, with Tony McMahon expected to retain the captain’s armband.

TICKETS
Fans are no longer able to buy tickets directly from Pompey, but they will be available to Valley Parade this evening. Click here for more details.

BETTING
Pompey are the 7/5 favourites with Sky Bet to secure all three points, while the hosts can be backed at 21/10. 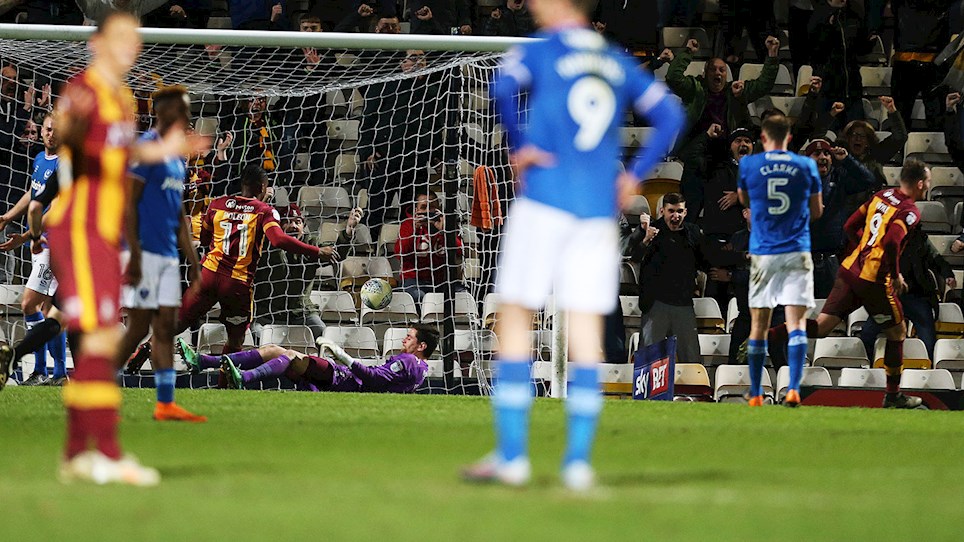 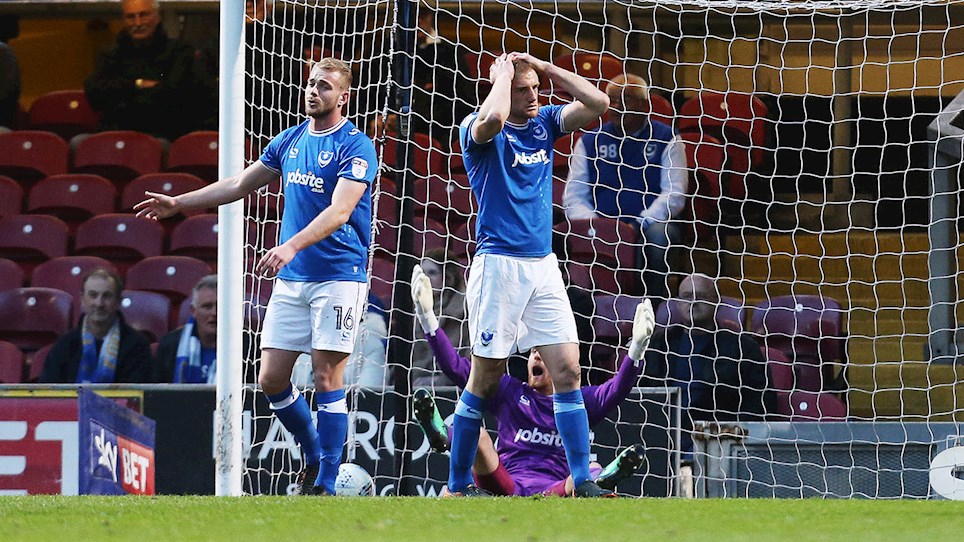 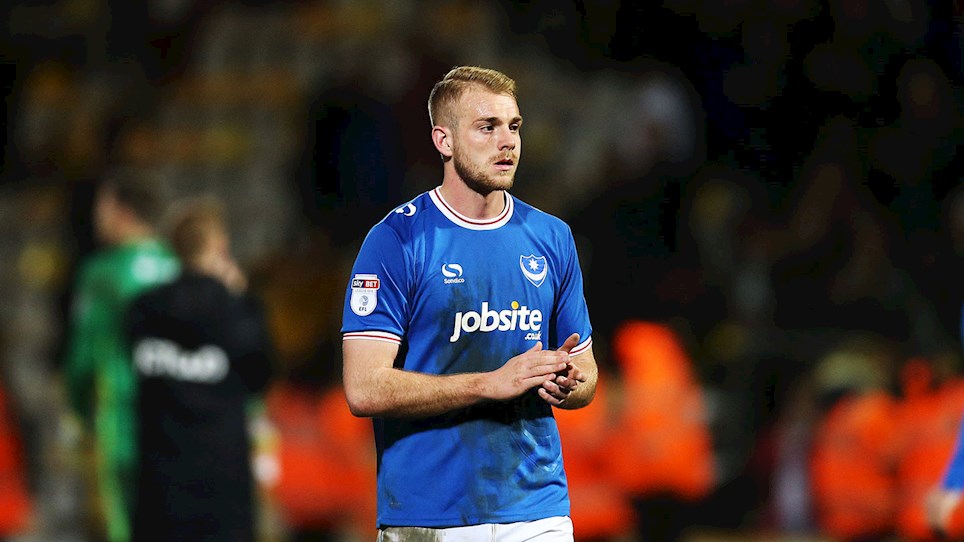 
It was certainly not a case of Pompey being outclassed at Valley Parade. Jackett: Bradford Better In Both Boxes


Kenny Jackett was happy with how Pompey performed in the middle of the pitch at Bradford.

by Neil Weld at Valley Parade

Pompey’s unbeaten run finally came to an end as they suffered a 3-1 defeat to Bradford at Valley Parade.

They trailed at the break to Nathaniel Knight-Percival’s strike, only for Brett Pitman to thunder home a leveller after the interval.

But the Blues were unable to build on that and some sloppy defending allowed Matty Lund to restore the Bantams’ lead, with Charlie Wyke adding a third goal in stoppage-time.

It was a disappointing evening with play-off rivals Charlton beating Shrewsbury, although Pompey remain a single point outside the top six.

Kenny Jackett made one change from the side that drew with Plymouth at the weekend.

Connor Ronan replaced Stuart O’Keefe in the centre of midfield, meaning Ben Close continued in the holding role in front of the back four.

Pompey were slow to get going, although a couple of balls into the box caused problems in the opening stages.

Jack Whatmough’s long throws were providing the biggest threat, however, and when one was flicked on by Kal Naismith, Bradford keeper Colin Doyle had to fumble the ball clear.

But it was the hosts who broke the deadlock on 14 minutes after Alex Gilliead had pressured Dion Donohue into conceding a corner.

It was sent into the box by Tony McMahon and nodded on by Matt Kilgallon for Knight-Percival to lash home at the far post.

There were not an abundance of openings at either end of the pitch in truth, although Matt Clarke headed wide following good work from Jamal Lowe to win a corner.

Pitman thought he should have won a penalty after going down in the box under pressure from Kilgallon, only for referee Andy Woolmer to wave away his protests.

It was a bright spell for the Blues and when Ronan let fly from 25 yards, Doyle dived to his right to palm the ball clear.

Another opportunity arrived after Close had been felled on the edge of the ‘D’, with Pitman placing a clever low free-kick through the wall and Doyle doing well to smother the danger.

The Bantams still had their moments, though, and Knight-Percival could not quite guide the ball on the target from another set-piece.

Pompey had one more chance from a corner deep into stoppage-time, but when Whatmough met Donohue’s cross, the home defence scrambled clear.

There was a bright start to the second half, with Gareth Evans slipping a low pass across the box for Lowe. His close-range finish was deflected wide, although the linesman’s flag was raised for offside.

A couple of corners caused problems at the other end, with one punched clear by Luke McGee, while Clarke got down low to head away the second.

Jackett freshened things up with a double switch on 55 minutes, as Ronan and Evans made way for O’Keefe and Oli Hawkins.

That also led to a slight change in formation, as Pitman dropped in behind Hawkins in a 4-2-3-1 system.

And the Blues almost grabbed a leveller soon after, with Lowe cutting the ball back and Close stabbing a shot just past the upright.

But the equaliser did arrive just past the hour mark and there were no prizes for guessing who scored it.

PITMAN continued his prolific scoring spell by collecting a pass from O’Keefe and expertly bending a 25-yard effort past Doyle’s despairing dive and into the net.

The scores were level for just 10 minutes, however, as Bradford retook the lead following a spell of frantic play when the Blues were unable to get the ball clear.

There was a mix-up at the back between Donohue and Clarke, which allowed substitute Lund to bundle through and slot past a helpless McGee.

Jackett made a final throw of the dice by bringing on Conor Chaplin for Naismith to add to the attack on 75 minutes.

There was a lengthy break in play when Tyrell Robinson went down injured for the hosts and was eventually stretchered off the pitch, receiving warm applause from both sets of fans.

A display of nine additional minutes from the fourth official raised the hopes of the large army of travelling Pompey fans behind the goal.

But they were dashed when McGee parried away a free-kick from McMahon and Wyke followed up to score.


It was certainly not a case of Pompey being outclassed at Valley Parade.

Jackett: Bradford Better In Both Boxes


Kenny Jackett was happy with how Pompey performed in the middle of the pitch at Bradford.

Tickets are still available for Pompey’s midweek trip to Bradford.

Kenny Jackett’s side make the long trip to Valley Parade for a rescheduled fixture on Tuesday evening (7.45pm kick-off).

Blues fans have already snapped up more than 800 seats in the South Stand for the League One contest.

But fans can also purchase tickets from the cash turnstiles at Valley Parade on the evening of the game.

There is a £1 charge for tickets that are bought online/over the phone. Tickets bought for the original date are still valid.

*Fans collecting tickets at Valley Parade should visit the collection point near to the club shop. Those who have not received expected tickets through the post should contact the Pompey ticket office by 10.30am on Tuesday at the latest.

**Price increases to £25 if bought on the day of the game.

***Must be bought with a full-paying adult.