Pompey still have a chance – albeit a slim one – of securing a place in the League One play-offs with a couple of games remaining.

But Bury, their opponents on Saturday, saw their fate sealed a couple of weeks ago and will be playing fourth tier football next term.

A home defeat to struggling Northampton was enough to confirm relegation and the Gigg Lane outfit are guaranteed to finish rock bottom.

Shakers striker Ryan Lowe was handed the managerial reins in January, but was not able to succeed where previous bosses Lee Clark and Chris Lucketti failed.

The north-west outfit have secured just one away league victory all season and have managed only six on home soil.

But they do go into Saturday’s contest on the back of successive stalemates at Doncaster and Shrewsbury.

Matt Clarke’s header proved the difference between the sides when they met at Fratton Park just before Christmas.

Pompey were beaten 3-0 in the last Gigg Lane meeting back in 2014, while a last-gasp Wes Fogden goal secured a dramatic 4-4 draw the previous season.

🎥 It was a crazy game on this day in 2014, as #Pompey came from 3-0 down to eventually draw 4-4 with Saturday's opponents @buryfcofficial ⬇️

And the Blues left it late at Gigg Lane, Wes Fogden's equaliser coming in the 93rd minute! pic.twitter.com/oRZaVdsBMQ

TEAM NEWS
Nathan Thompson has recovered from a dead leg suffered against Charlton last week and is available to feature.

Danny Mayor (ankle) is a doubt for the hosts, who are definitely missing top scorer Jermaine Beckford (knee).

VIEW FROM THE DRESSING ROOM
Read the thoughts of Kenny Jackett and Jamal Lowe or register for a free iFollow account to watch the below videos.

Manager Kenny Jackett looks ahead to Pompey's final away trip of the season, as they prepare to face Bury at Gigg Lane.

Defender Christian Burgess speaks exclusively to iFollow ahead of Pompey's final away game of the season at relegated Bury.

TICKETS
Seats can be secured from the Gigg Lane ticket office or at the cash turnstiles (eight and nine in the Main Stand). Click here for more details.

BETTING
Pompey are the 10/11 favourites with Sky Bet to secure all three points, while the hosts can be backed at 16/5. 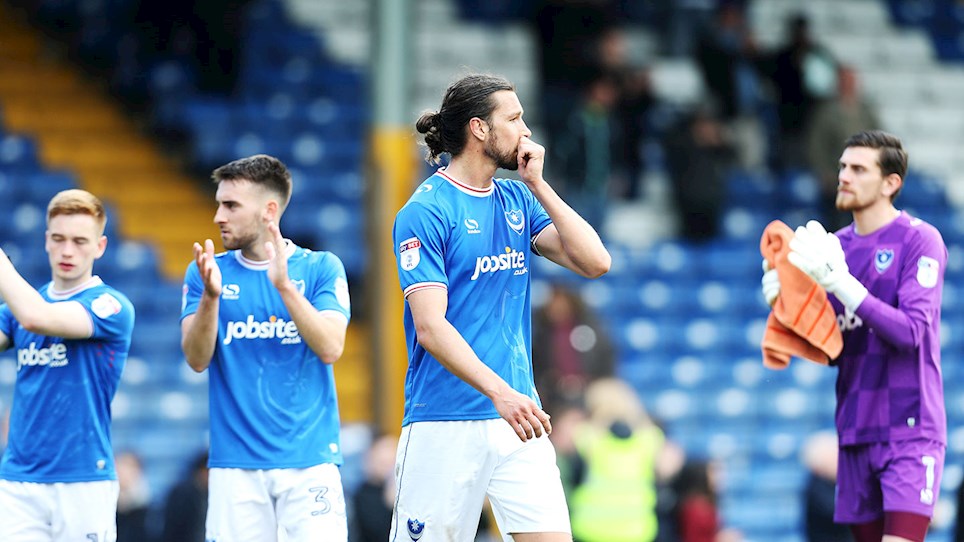 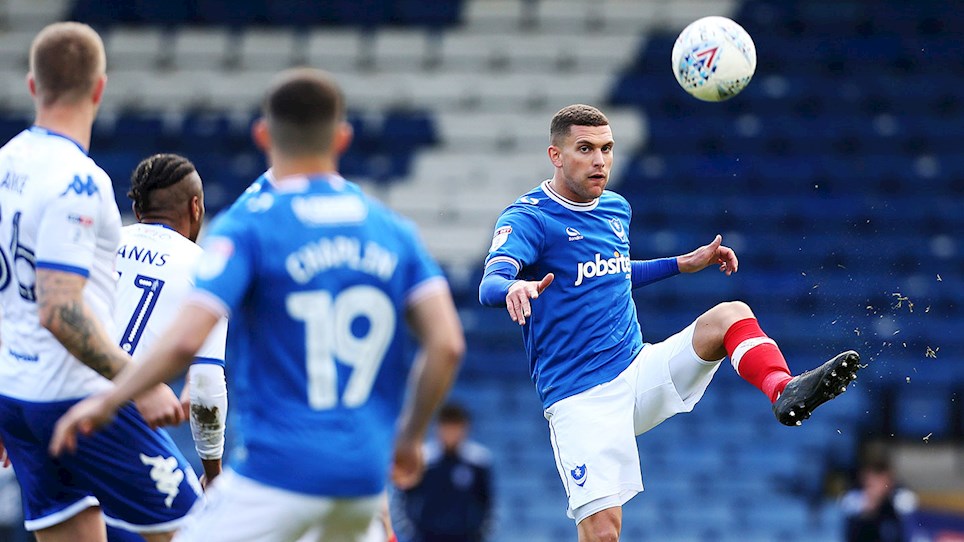 O'Keefe: Final Ball Let Us Down


More than 1,500 fans made the long trip north to Bury for Pompey’s final game on the road this season. 
Kenny Jackett slammed his side for a lack of energy in their defeat at Bury.

by Neil Weld at Gigg Lane

Pompey’s slim chance of claiming a play-off spot was ended after they were beaten 1-0 at already relegated Bury.

In truth, neither side deserved to win a dire contest that did little to entertain another large travelling army.

But it was the Shakers who were able to celebrate the consolation of three points, as George Miller stole the ball from Luke McGee to score.

Kenny Jackett made four changes from the side that were beaten at home by Charlton the previous week.

Oli Hawkins returned up front and Connor Ronan started wide on the left in a 4-4-2 system, while there were also places for Stuart O’Keefe and Christian Burgess.

Gareth Evans and Brandon Haunstrup both dropped to the bench, as Jack Whatmough missed out through injury and Kal Naismith was not included in the squad.

The first half was an instantly forgettable affair, with little in the way of goalmouth action at either end of the pitch.

It was typical end-of-season fare, as both sides displayed plenty of energy, but not much quality in the final third.

Ben Close fizzed a dangerous delivery across the face of goal, although none of his team-mates were there to get on the end of it.

Bury were mildly more threatening and Harry Bunn had an angled effort that cleared the crossbar.

Jay O’Shea then turned sharply inside the Blues box and hooked the ball narrowly over, in what was probably the best chance of the half.

Hawkins should have fond the target when he dived to meet Jamal Lowe’s cross on 24 minutes, although his blushes were spared by the linesman’s flag.

The hosts were then forced into a change when Bunn went down off the ball and was replaced by Tsun Dai.

Pompey started to find a bit more fluidity just before the break, although Brett Pitman and Lowe were both unable to find the target.

Any hope that the second half was going to be livelier than the first appeared to be dashed when O’Shea failed to beat the first man with a dangerous free-kick straight after the restart.

But the Blues went closer moments later, with Hawkins meeting Lowe’s cross and sending a header looping onto the roof of the net.

There was then a nervy moment for the hosts when Miller caught Matt Clarke with a flailing arm, although referee Andy Haines opted to brandish only a yellow card.

Jackett made his first change on 55 minutes, with Hawkins withdrawn for Matty Kennedy, resulting in a switch back to a 4-1-4-1 system.

A series of corners caused problems for the Shakers, as O’Keefe and Pitman both had efforts deflected off target, while Burgess then headed over.

Another set of fresh legs was introduced just past the hour mark, with Dion Donohue making way for Haunstrup.

Bury almost broke the deadlock soon after following an almighty scramble in the box, but a well-placed Pitman was able to hack Miller’s effort from the line.

It was only a brief reprieve for the Blues, however, as Miller did open the scoring for the hosts on 67 minutes.

But it was a goal that should have been avoided, as Kennedy passed back to McGee and when he took a touch, the Shakers striker nipped in to steal the ball and slot it home.

Kennedy went down under pressure from Ryan Cooney as Pompey sought to get back on level terms, only for appeals for a penalty to be waved away by Haines.

Bury missed a good opportunity to double their lead, however, when Saul Shotton fired over after McGee had punched clear a corner.

Conor Chaplin replaced Ronan for the final few moments and saw a stoppage-time shot brilliant pushed past the post by Joe Murphy.

Burgess then saw his header cleared from the line from the resulting corner, as the Blues were unable to force a late equaliser.

O'Keefe: Final Ball Let Us Down


More than 1,500 fans made the long trip north to Bury for Pompey’s final game on the road this season.


Kenny Jackett slammed his side for a lack of energy in their defeat at Bury.

Tickets are still available for Pompey’s match at Bury on Saturday (3pm kick-off).

Blues fans have already snapped up more than 1,500 unreserved seats in the East Stand for the League One contest at Gigg Lane.

They can be bought from the Frogmore Road ticket office until 4pm on Friday (online sales have stopped, as there are no collections at Bury).

But supporters can also pay on the day from the Gigg Lane ticket office or at the cash turnstiles.

Wheelchair and ambulant spaces are priced £14 and include a carer if on the highest rate of DLA or PIP.

Any fans who are expecting to be sent tickets, but do not receive them in Friday's post, should contact the Pompey ticket office (0345 646 1898) by 4pm on Friday at the latest. 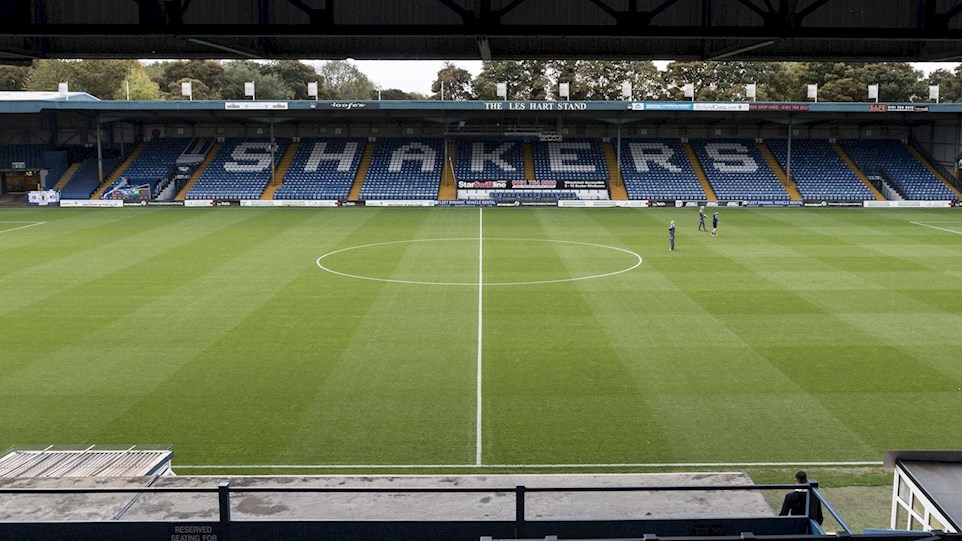 Bury (A): Tickets On General Sale


Tickets for Pompey's visit to Bury are now on general sale.


Tickets for Pompey’s visit to Bury go on sale next week.