Pompey travel to Plymouth this weekend for a clash between two sides that are battling for a play-off place.

It is the hosts who currently hold the upper hand, sitting two places – and one point – above the Blues in fifth, with a game in hand.

A win for either team on Saturday would undoubtedly provide a boost as the finish line draws ever closer.

But with two points separating the five sides hunting for just two spots, nothing will be decided for certain at Home Park.

Whatever the outcome, it has certainly been an incredible turnaround for Argyle, who were pipped to the League Two title by Pompey on the final day of last term.

A 1-0 victory for Kenny Jackett’s troops back in November – courtesy of Kal Naismith’s strike – sent the Pilgrims to the foot of the table.

They have lost just two of the following 20 league fixtures, however, to boost their chances of playing Championship football for the first time since 2010.

It finished all square when the sides last clashed at Home Park in October 2016, with Kyle Bennett and Danny Rose on target in a 2-2 draw.

Goalkeeper Remi Matthews is a doubt for the hosts after recently becoming a father, with Lionel Ainsworth (back), Simon Church (hip) and Antoni Sarcevic (groin) all out.

Defender Sonny Bradley and striker Ryan Taylor are both expected to feature against their former club.

Ryan Edwards was given the all-clear from doctors earlier in the week, three months after being diagnosed with testicular cancer.

TICKETS
Pompey have sold their full allocation of tickets and no more will be made available. Please do not travel without a ticket.

BETTING
Pompey and Plymouth are both priced at 13/8 with Sky Bet to secure all three points, with the draw at 23/10. 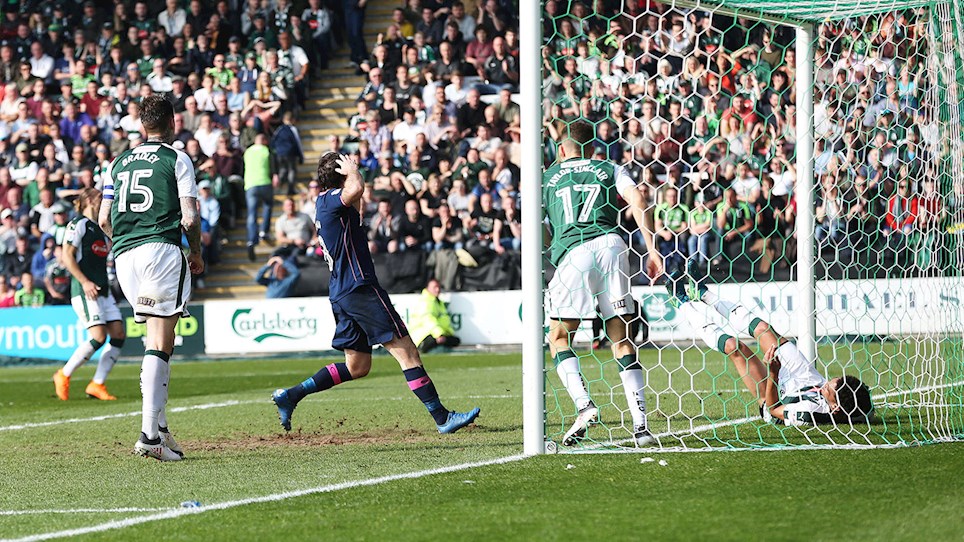 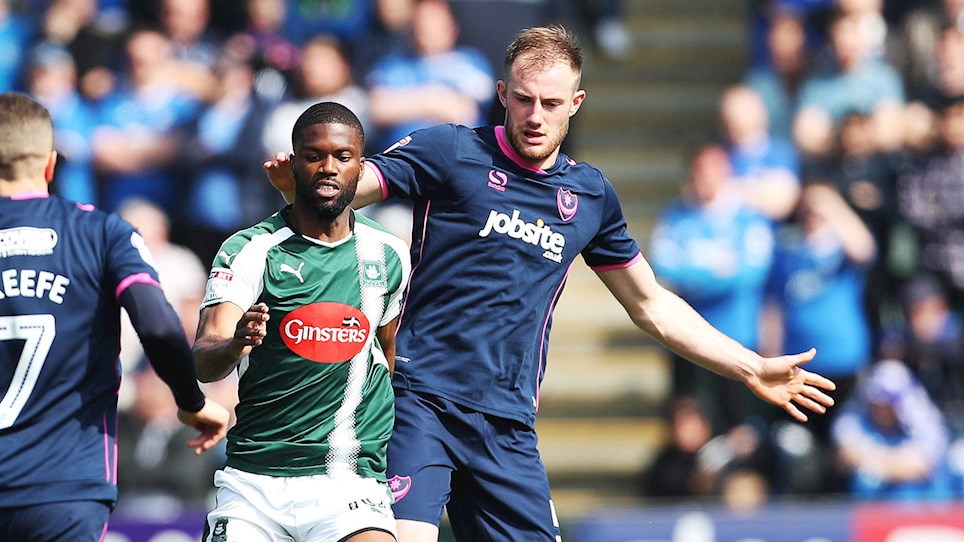 
It was a point that kept both sides well in the hunt for a place in the League One play-offs.

Pompey’s unbeaten run continued as they collected a point in a tense – if mostly undramatic – clash with play-off rivals Plymouth.

There was plenty of energy on display at a sunny Home Park, but too often a lack of quality in the final third.

Neither goalkeeper was given too much to do, although the Blues almost snatched the win late on, as Lowe had a shot cleared from the line before the crossbar came to Argyle’s rescue.

Kenny Jackett made one change from the side that secured a thrilling draw at Rochdale the previous week.

Anton Walkes missed out with a hamstring injury, so Stuart O’Keefe made a return to the starting line-up in midfield.

With Matty Kennedy also carrying a knock, spaces opened up on the bench for both Conor Chaplin and Sylvain Deslandes.

There have been plenty of classic contests between the clubs in recent years, but the first half of the latest encounter was one to forget.

Neither side was able to find any attacking fluency, while both were guilty of giving away possession far too easily.

Pompey did showcase some neat passing football at times, but the final ball into the box was often wasted.

There were long-range attempts at either end of the pitch, not that efforts from Graham Carey or Dion Donohue were ever going to test the respective goalkeepers.

The first decent chance fell the Blues’ way on 31 minutes, with Kyle Letheren called into action to deal with Lowe’s angled drive.

He soon turned provider with a low cross towards Brett Pitman that the skipper could only scuff into Letheren’s arms.

The visitors were looking solid at the opposite end and when Matt Clarke lost the ball, Jack Whatmough and Donohue combined to deny Joel Grant.

There was some drama just before the break when Ruben Lameiras went down in the box under pressure from Whatmough.

But referee Dean Whitestone was not impressed and Pompey’s defender berated the tumbling Pilgrim, feeling he had dived.

The second half was an immediate improvement on the first, with both sides having an early opportunity to break the deadlock.

First up were Pompey, as Lowe cut inside from the right and sent in a low shot that rippled the side netting.

It was more of an opportunistic effort for the hosts, with Carey’s looping strike not quite able to get down in time.

Nathan Thompson then had to stretch to intercept Oscar Threlkeld’s cross before it could reach the unmarked Carey at the far post.

Argyle were starting to look dangerous and it was Carey who also provided the next threat, although his attempt with the outside of the boot arrowed over.

Their top scorer also tried a curling shot from the edge of the box, with the ball flying comfortably into Luke McGee’s arms.

Jackett made his first switch just before the hour mark, as Connor Ronan replaced O’Keefe in the centre of midfield.

It was a period when Pompey were getting pushed further back, although they weathered the storm and started trying to make an impact at the other end.

There was a chance on 73 minutes when Whatmough met a Gareth Evans’ corner and headed towards goal.

Lowe was stood right in front of Letheren, but the Plymouth keeper did well to deal with that distraction and gather the ball.

It was Lowe who needed to grow an extra couple of inches late on, as he tried to convert Evans’ cross.

And Whatmough was also unable to guide the ball on target when he stooped to meet Donohue’s corner.

The game suddenly came alive in the dying seconds and Pompey had two great opportunities to claim the victory.

Firstly, Lowe ran across the centre of the box and tried to slot the ball into the net, only for Zak Vyner to clear from the line.

Threlkeld then headed a cross against his own bar, as Plymouth held on to ensure the points would be shared.


It was a point that kept both sides well in the hunt for a place in the League One play-offs.

Pompey have sold their full allocation of tickets for the trip to Plymouth.

It means that Kenny Jackett’s will be backed by 1,600 supporters at Home Park on Saturday, April 14 (3pm kick-off).

The final few seats in the Barn Park Stand were snapped up on Tuesday morning. 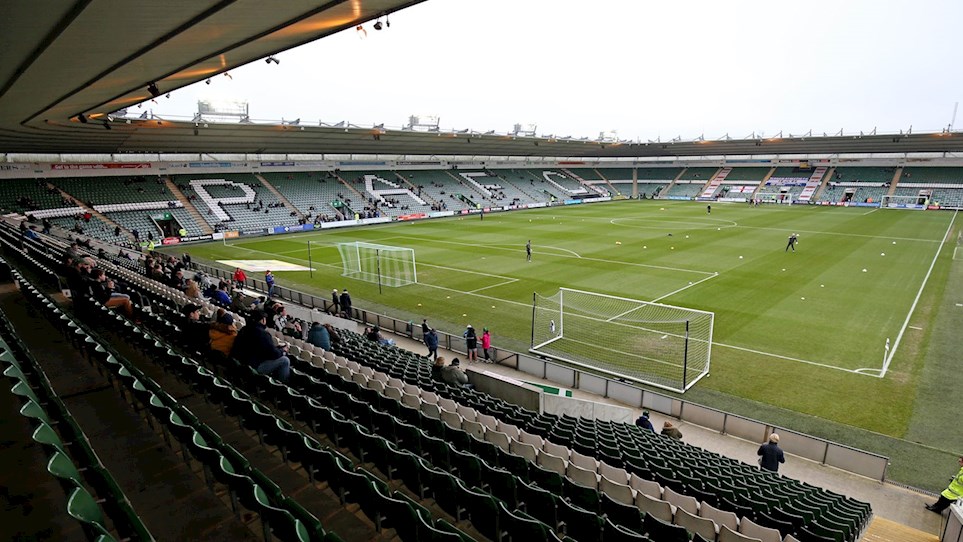 
Tickets for Pompey’s visit to Plymouth go on sale next week.