There will be several south coast reunions when Pompey take on Wigan at Fratton Park on Easter Monday.

But both sides will be keen to forget all the sub-plots and simply focus on trying to boost their respective promotion hopes in front of the Sky Sports cameras.

Paul Cook is making his first return to the Blues since memorably leading them to the League Two title last term.

But he soon departed for the Latics with a number of his backroom team – including assistant manager Leam Richardson – and later signed Noel Hunt and Gary Roberts.

Wigan have been in fine form this season, with most of the headlines reserved for their victory over Manchester City that secured a spot in the FA Cup quarter-finals.

It is an immediate return to the Championship that is of greater concern, though, and they are currently locked in a three-way tussle with Blackburn and Shrewsbury for automatic promotion.

Cook’s men lead the way following a 3-0 victory over Oldham at the DW Stadium on Good Friday and have won an incredible 13 games on their league travels.

Conor Chaplin came off the bench to grab an equaliser when the sides drew 1-1 in the north-west back in August.

They have not met at Fratton since both were in the Premier League during the 2009/10 campaign, with Aruna Dindane bagging a hat-trick in a 4-0 Pompey triumph.

Wigan are expected to have a fully-fit squad to choose from, with Roberts and Hunt both available to feature against their former club.

VIEW FROM THE DRESSING ROOM
Read the thoughts of Kenny Jackett and Anton Walkes or register for a free iFollow account to watch video reaction to Saturday’s win at Walsall.

TICKETS
Seats can be secured online here or from the booth behind the Fratton End on the day of the game. Click here for more details.

Overseas subscribers will not be able to watch the game on iFollow because it is a televised fixture. Click here for more details.

BETTING
Wigan are the 21/20 favourites with Sky Bet to secure all three points, while the hosts can be backed at 29/10. 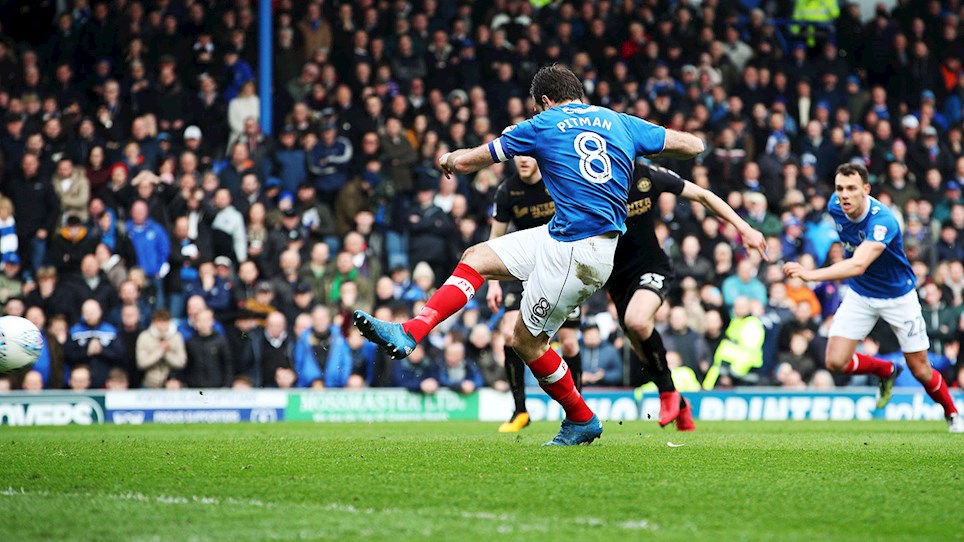 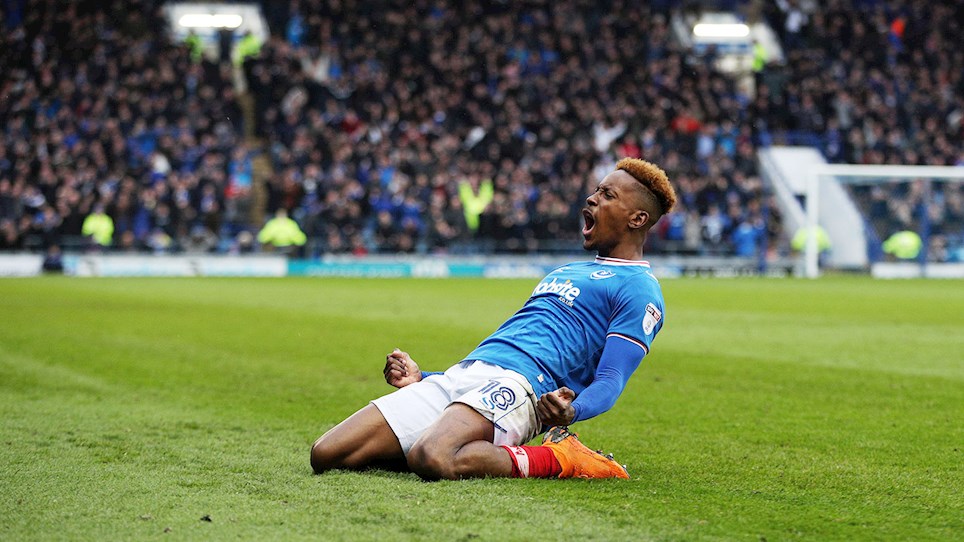 
View the photos from the Blues' latest triumph at Fratton Park 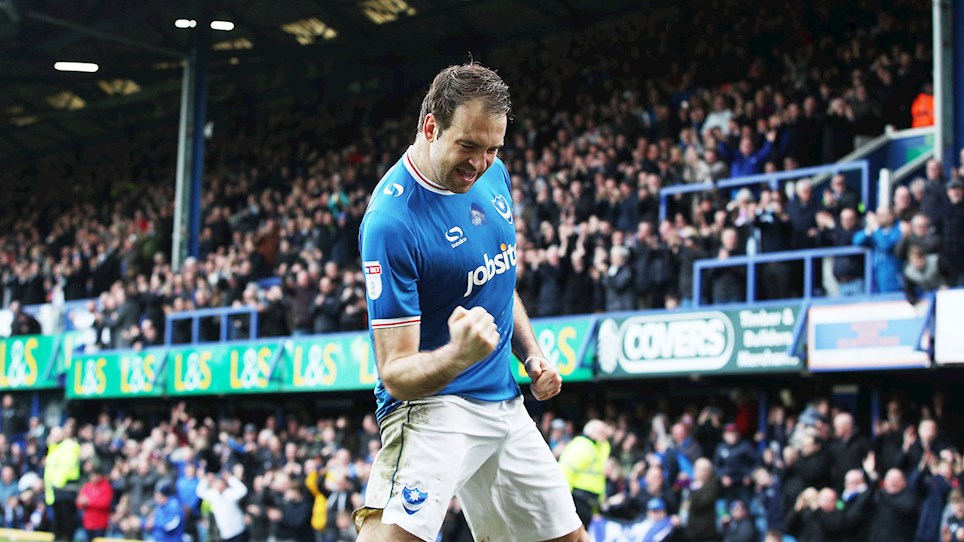 Twenty's Not Plenty For Pitman


Brett Pitman has become the first Pompey player to hit 20 goals in a season for 15 years. 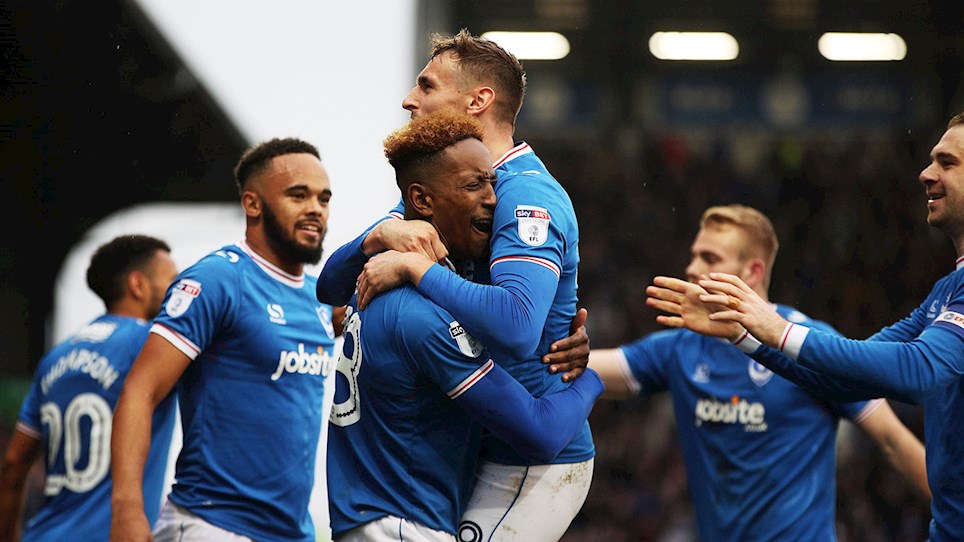 Lowe: We Dug In Deep

Pompey’s fine run of form continued with a convincing victory over title-chasing Wigan at Fratton Park.

It was the second home game in succession that the Blues impressed in front of the Sky Sports cameras.

Brett Pitman maintained his own prolific run with a penalty before the break, while Jamal Lowe doubled the advantage on a damp Easter Monday.

Will Grigg came off the bench to pull once back for the Latics late on, but Pompey held on to maintain their play-off hopes.

Kenny Jackett made one change from the side that won at Walsall just a couple of days earlier.

With Dion Donohue’s partner about to give birth, he was replaced at left-back by Brandon Haunstrup.

It was a first return to Fratton Park for title-winning manager Paul Cook and his assistant Leam Richardson.

But Gary Roberts had to be content with a place on the bench against his former club, while Noel Hunt was in the press box on radio punditry duties.

It was the hosts who had the first chance when Gareth Evans delivered a low cross that Chey Dunkley just about got to before Pitman.

But the Latics – as expected – controlled possession and a few niggly challenges from Pompey ensured the contest became a scrappy affair.

Max Power saw a shot deflected narrowly past the post after possession had been stolen, as Wigan looked to make the pressure count.

It was certainly not one-way traffic, though, and when the atmosphere started to go up a few notches, the players responded.

Pitman managed to send a dangerous low cross into the box from the right and Lowe slid in at the near post, but could not quite make a connection.

Both sides earned a yellow card midway through the first half, with Callum Elder cautioned for a foul on Lowe and Nathan Thompson booked for upending Nick Powell.

Michael Jacobs thought he should have been awarded a penalty on 28 minutes after going down under pressure from Thompson, only to see his appeals waved away by Tim Robinson.

The referee – after being alerted by the fourth official – then had to go over to speak to Cook about his protestations, with the Latics boss given a stern ticking off.

Powell sent a free-kick into the wall, while James Vaughan dragged a shot wide following good work by Max Power.

But it was the Blues who broke the deadlock on 40 minutes after Dan Burn had clumsily brought down Ben Close in the box.

PITMAN stepped up to take the penalty, sending Christian Walton the wrong way as he buried the ball into the bottom left corner.

He almost had another before the break when Elder made a hash out of clearing, but Walton came to the defender’s rescue.

There was still time for Wigan to have a chance to level, though, and it took a fine diving header from Jack Whatmough to stop Powell meeting Nathan Byrne’s cross.

It was a fairly quiet start to the second half, with Powell hitting another free-kick into the wall, while Kal Naismith’s long-range effort was comfortably dealt with at the other end.

But LOWE certainly got Fratton Park rocking again on 55 minutes when he doubled Pompey’s advantage.

The forward collected a low cross from Thompson, turned sharply and sent the ball past Walton’s grasp and into the bottom corner.

That was the cue for the heavens to open, although it failed to dampen the spirits of the crowd – even if some in the front row did make a dash for shelter.

Wigan had an opportunity when a free-kick was only partially cleared, but Sam Morsy hit the loose ball high into the Fratton End.

Cook made a double switch as he tried to find a route back into the game, with the dangerous Grigg joining Ryan Colclough on the pitch.

But it was Powell who almost reduced the deficit on 69 minutes, only for Luke McGee to brilliantly divert the ball against the crossbar.

There were a few nerves creeping in – on and off the pitch – and the game descended into a scrappy affair once more, with cheap fouls conceded by both sides.

McGee was still looking assured, though, and made a super stop to keep out Grigg’s cleanly-struck volley from a Jacobs centre.

Roberts was brought on as Cook made one last throw of the dice, with the midfielder given warm applause by the Fratton faithful.

Pompey were beginning to tire, but failed to let their efforts falter, with a host of brave challenges and strong headers.

It looked like they would comfortably see the game out, but the nerves returned when Grigg nodded home a Roberts cross.

The Blues saw out five minutes of stoppage-time, however, to secure a memorable victory and spoil Cook’s south coast return.


View the photos from the Blues' latest triumph at Fratton Park

Twenty's Not Plenty For Pitman


Brett Pitman has become the first Pompey player to hit 20 goals in a season for 15 years.

Lowe: We Dug In Deep

Fans are advised to secure their seat in advance and take advantage of cheaper ticket prices.

The majority of remaining places are available in the Milton End and can be bought via our eticketing site. Click here for a list of prices and booking charges.

Subject to availability, they can also be purchased from the booth behind the Fratton End on the day of the game, which is open from 1.30pm.

Due to the match being televised live on Sky Sports, there will be fewer than 100 car parking spaces available for fans behind the North Stand.