Pompey get their Checkatrade Trophy campaign underway at Fratton Park this evening against a Fulham under-21 side (7.45pm kick-off).

It is the first fixture of the group stage, with another home match against Crawley and a trip to Charlton following.

Three points are up for grabs for the winners, while if it finishes all square both teams will collect a point before a penalty shoot-out is held for a bonus one.

The young Cottagers did not take part in the competition last season, but their category one academy status means they were invited to participate this term.

Pompey will be aiming to progress further than the 2016/17 campaign, when they failed to reach the knockout stages.

A 4-3 defeat at Yeovil was followed by a draw with Reading (with the Royals claiming the bonus point) and a narrow victory over Bristol Rovers.

Fulham’s youngsters compete in the second tier of Premier League 2 and missed out on promotion last term after losing to Newcastle in the play-offs.

The Londoners have not visited Fratton Park for eight years, with Bobby Zamora’s goal enough to secure them a top-flight victory in August 2009.

TEAM NEWS
Pompey are still without Matt Clarke (groin) and Milan Lalkovic (ankle), while Tareiq Holmes-Dennis’ knee injury is likely to keep him out for the rest of the season.

Jamal Lowe’s suspension does not include the Checkatrade Trophy, so he is available to feature.

Competition rules mean that the Blues must field four ‘qualifying players’, which includes those who start the previous or following match, or have made at least 40 first team starts.

As an ‘invited’ club, the visitors’ side has to include at least six players who are under the age of 21.

VIEW FROM THE DRESSING ROOM
Read what Kenny Jackett and Ben Close have to say about the game or register for a free iFollow account to watch the below pre-match videos.

TICKETS
Tickets can be bought online here and will be available tonight from the Frogmore Road ticket office. Click here for a list of prices.

Please note that only the South Upper and Family Section are open for home supporters, while seating is unreserved.

MATCH COVERAGE
Domestic and overseas iFollow subscribers can listen to live coverage of the game by signing in to their account and visiting the match centre.

Please note that there is no live video stream for overseas subscribers, as that feature is only available for league matches.

Fans are reminded that there was an update to the app last week to fix several bugs and some users might need to do a manual update.

BETTING
Pompey are 8/13 favourites with Sky Bet to collect all three points, while the visitors can be backed at 18/5. 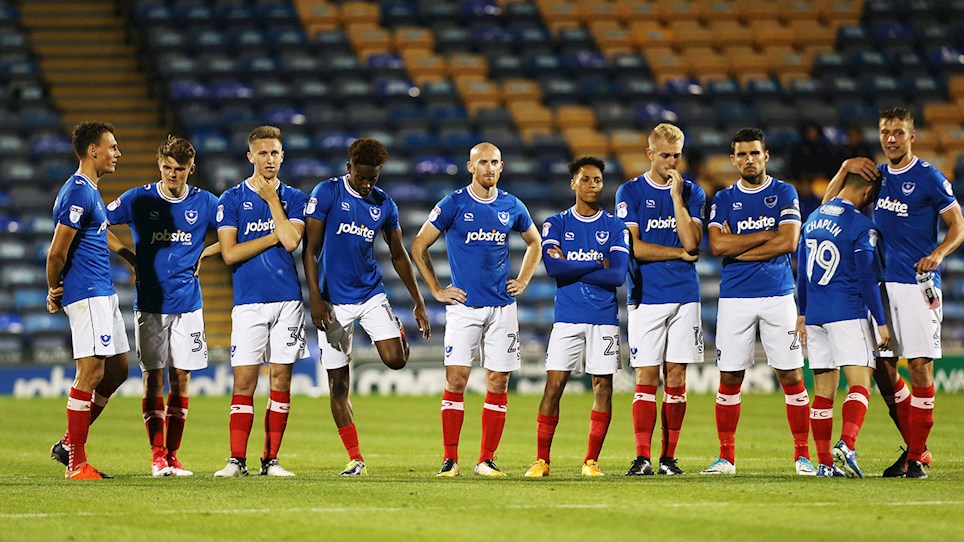 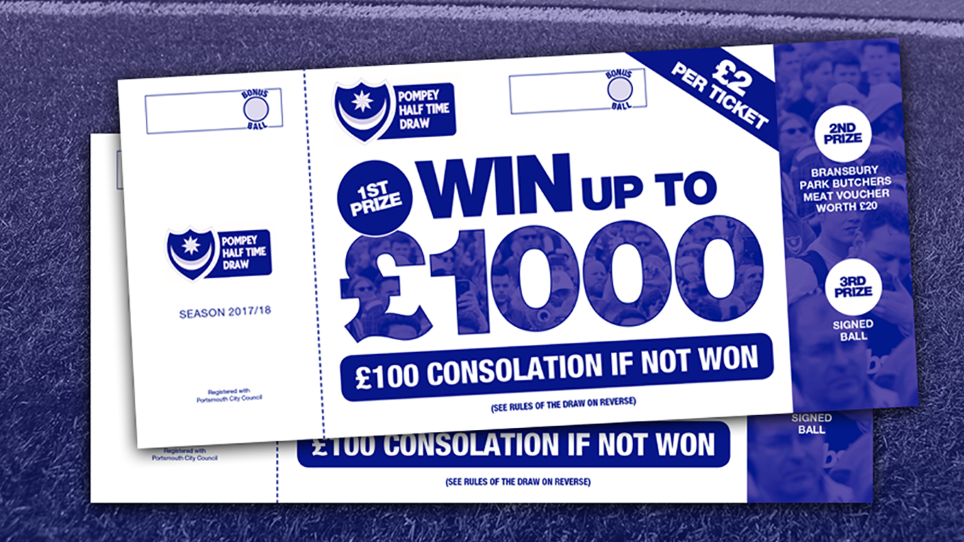 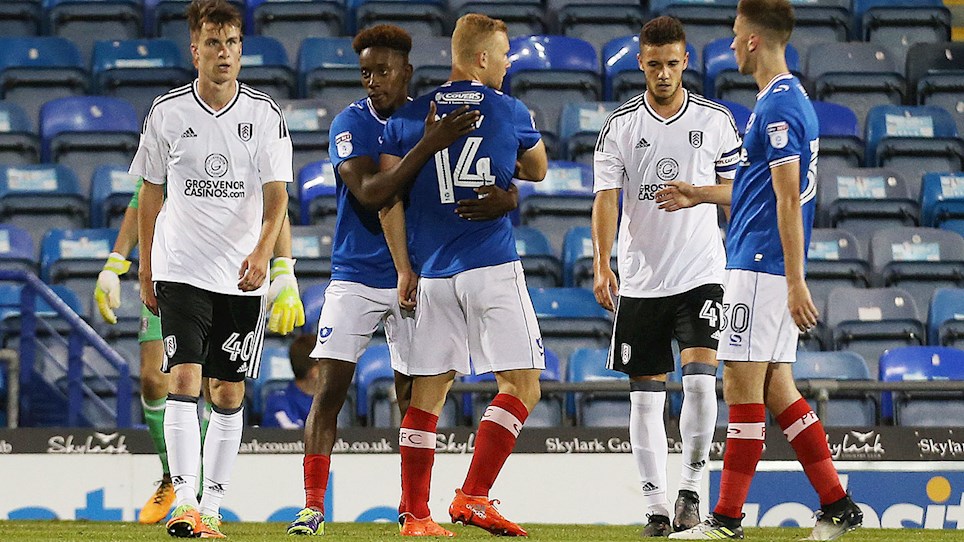 
View the photos from Pompey's Checkatrade Trophy clash with Fulham U21. 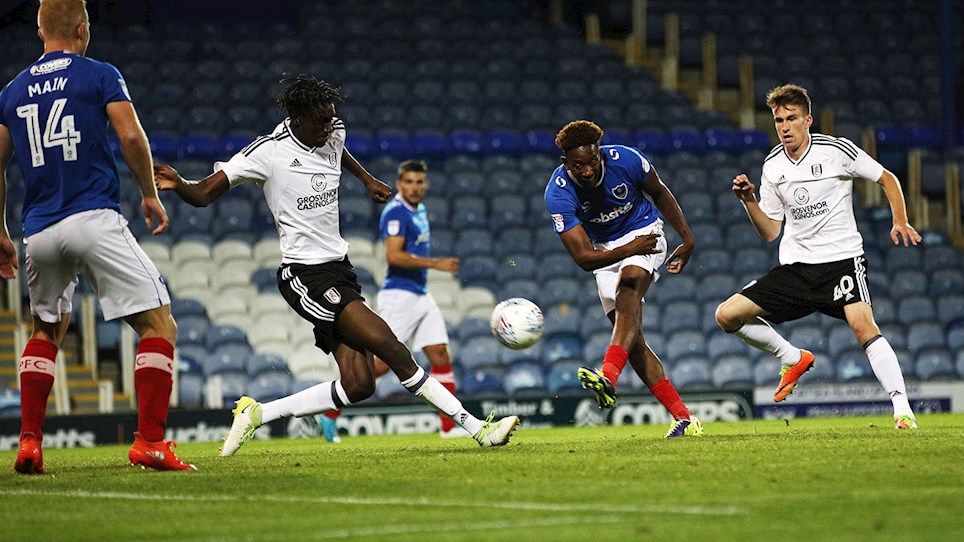 Lowe: I'd Have Swapped Goals For Win


It was some showing from a player who is currently suspended.

Pompey began their Checkatrade Trophy campaign with an entertaining 3-3 draw against Fulham’s under-21 side at a sparsely-populated Fratton Park.

But it was the visitors who claimed a bonus point after triumphing 4-2 in the resulting penalty shoot-out.

Stephen Humphrys gave the Londoners an interval lead, while the goals rained in following the interval.

Jamal Lowe and Kal Naismith turned the match around before George Williams levelled from the spot.

But there was still time for Lowe to fire the Blues back into the lead, while Elijah Adebayo’s strike then ensured penalties.

Kenny Jackett made seven changes to the side that were beaten at Oxford in the league on Saturday.

First year scholar Joe Hancott – at the age of just 16 years and 161 days – was handed a debut at left-back.

The competition rules also allowed Lowe to feature, despite being in the middle of his three-match suspension.

Gareth Evans, Jack Whatmough, Adam May and Naismith were the only players who started at the Kassam Stadium to keep their place.

There were not too many inside Fratton Park to watch an entertaining first half that saw chances at both ends of the pitch.

A lovely passing move from the hosts ended with May drilling in a low shot that was well held by Cottagers keeper Magnus Norman.

Alex Bass then juggled a dangerous Jon Dagur Thorsteinsson free-kick that was whipped in from wide on the left.

The action quickly switched from one end of the pitch to the other and Curtis Main glanced a header wide from Ben Close’s cross.

But it was Fulham who broke the deadlock on 21 minutes, as Humphrys drilled an angled shot right into the bottom corner.

Bass stopped Thorsteinsson from doubling their lead moments later, getting down to his right to push the midfielder’s effort clear.

Pompey were soon on the hunt for an equaliser, however, and Close’s snap-shot was deflected inches past the post.

The hosts then broke quickly from a Cottagers corner and Main released Hancott, whose fierce strike was well saved by Norman.

Whatmough wasted a fantastic opportunity to score late in the first half when he was left free to meet May’s delivery, only to send the ball wide.

Pompey had a great chance to draw level just after the interval when May slipped a pass through to Naismith in the box.

The Scottish forward elected to try to squeeze a shot inside the keeper’s near post, but Norman managed to divert the ball behind.

LOWE did find the net on 54 minutes, though, picking up Main’s neat back-heel and angling a shot into the net.

And the match was turned on its head moments later, as Evans whipped in a cross from wide on the right that NAISMITH fired home.

Pompey were not ahead for long, though, as Bass needlessly brought down Williams and referee Antony Coggins pointed to the spot.

It was Williams who stepped up to take the penalty and hammered it straight down the middle to make it all square.

But the goals kept coming and the Blues were back in front on 66 minutes when Evans’ attempt was deflected into LOWE’s path and he swivelled before firing an unstoppable shot past Norman.

Substitute Kyle Bennett almost gave the hosts a cushion, only to see his long-range effort rattle the crossbar.

And Fulham ensured there was more drama in a topsy-turvy encounter when Adebayo slammed home, despite furious Pompey appeals for offside.

That ensured both sides took one point, with a penalty shoot-out held to see who would claim the bonus one on offer.

Fulham took four in the new ‘ABBA’ format and scored them all, but while Conor Chaplin and Bennett both found the net, Norman saved from Naismith and Evans.


View the photos from Pompey's Checkatrade Trophy clash with Fulham U21.

Lowe: I'd Have Swapped Goals For Win


It was some showing from a player who is currently suspended.

Tickets for Pompey’s opening Checkatrade Trophy fixture against Fulham U21s go on sale to all supporters from 10am tomorrow (August 8).

The young Cottagers visit Fratton Park in the opening round of group stage matches on Wednesday, August 16 (7.45pm kick-off)

Tickets will be available to buy exclusively from our eticketing site for the first two days of sale.

Please note that only the South Stand Upper and Family Section will be open for this game, and there will be unreserved seating.

*Includes carer in on highest rate of DLA or PIP.