All you need to know about League One clash

Saturday sees the dawning of a brand new era at Pompey.

Not only are the Blues competing in the third tier of English football for the first time since suffering relegation to the basement in 2013.

But they have a new manager in Kenny Jackett, who has brought in a selection of fresh faces to boost his squad.

And, of course, the club are now under new ownership after Michael Eisner’s Tornante Company completed their takeover on Thursday.

So there is sure to be celebratory atmosphere inside Fratton Park, as last term’s League Two title winners get the 2017/18 campaign started against Rochdale.

Their opponents have enjoyed plenty of success under Keith Hill, who has twice led them to promotion either side of a spell in charge at Barnsley.

And last season they were just four points adrift of the play-off places in ninth spot, as they chased a place in the Championship for the first time ever.

It finished 3-0 to Pompey when the sides last met at Fratton Park in October 2013 – a repeat of that would certainly get the party started.

TEAM NEWS
Nathan Thompson will have to wait a while before making his Blues bow, as he continues his recovery from a foot injury.

Jackett will also be without Matt Clarke, with the defender expected to be out for the rest of the month with a groin problem.

VIEW FROM THE DRESSING ROOM
Read what Kenny Jackett and Christian Burgess have to say about the game or register for a free iFollow account to watch the below pre-match videos.

Manager Kenny Jackett looks ahead to Pompey's season-opener at home to Rochdale on Saturday.

Conor Chaplin looks ahead to Pompey's 2017/18 curtain-raiser against Rochdale at Fratton Park.

TICKETS
There are limited number of tickets still available and they can be bought online here.

Any remaining on Saturday will be sold from the Frogmore Road ticket office, which is open from 10am.

We will also have match updates on Twitter and our new match centre.

BETTING
Pompey are 4/5 favourites with Sky Bet to secure all three points, while the visitors can be backed at 100/30.

Click here to read our full betting preview and sign-up at www.skybet.com/pompey for great offers and promotions. 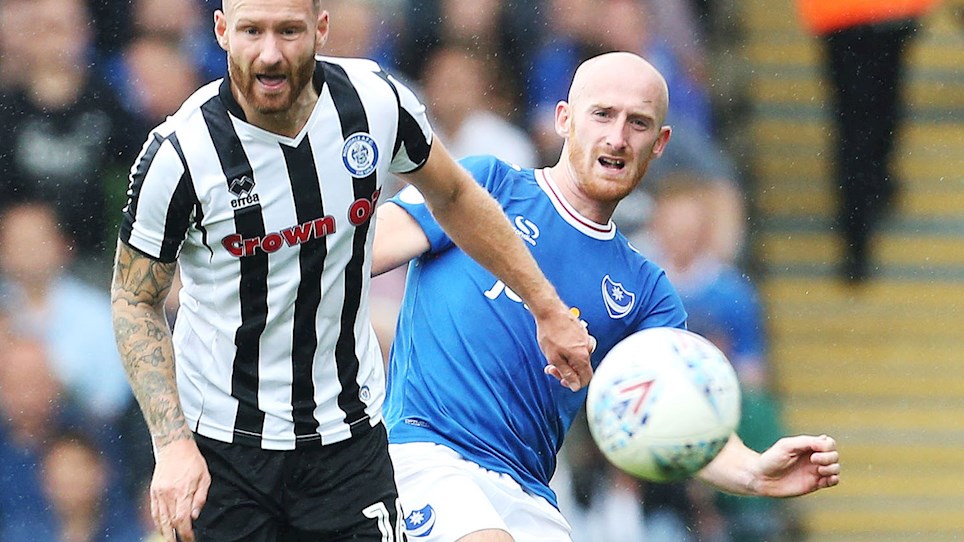 Talbot: I Wasn't Expecting To Play


He was a surprise inclusion when the sides were announced at 2pm on Saturday. 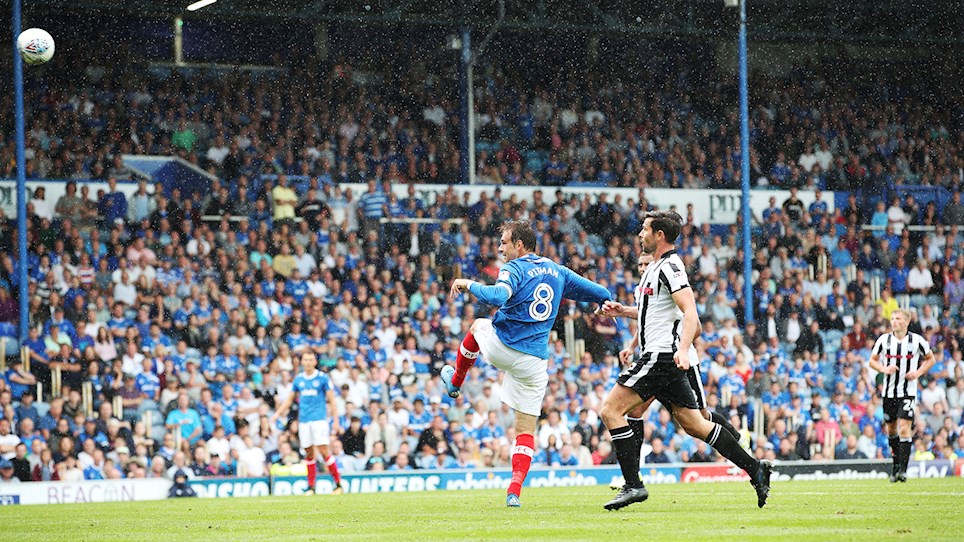 
View the photos from Pompey's opening day victory over Rochdale.


It was a dream Pompey debut for Brett Pitman.

Brett Pitman scored a brace on his debut to ensure Pompey began life in League One with victory over Rochdale.

The striker bagged an impressive individual goal after Keith Keane had been dismissed for the visitors at Fratton Park.

But there was a nervous edge to the closing stages, with substitute Jamal Lowe also sent off for the Blues.

That changed to elation in stoppage-time, however, as Pitman headed home to complete a memorable afternoon for the skipper.

Luke McGee, Tareiq Holmes-Dennis and Pitman all featured, while there was also a surprise appearance for Drew Talbot at right-back.

There were a mixture of emotions before kick-off, with Michael Eisner and other members of the Tornante Company applauded onto the pitch.

It was a more sombre occasion after that, however, with a minute’s applause to remember former Blues players Fred Evans, Pat Neil and Jimmy White, who all passed away over the summer.

Supporters were also paying their respects to fan Alan Dobson, who sadly died during the recent friendly against Bournemouth.

Once the action got underway at a sunny Fratton Park, it was the visitors who looked the more threatening.

Andy Cannon blasted a shot over the crossbar, although there were not too many opportunities to test McGee.

And Rochdale’s threat was blunted somewhat when they were reduced to 10 men on 21 minutes.

Conor Chaplin collected a loose ball and charged towards goal, only to be crudely upended by Keane just outside the box.

Referee Lee Probert immediately brandished a red card and the centre-back was forced to trudge off to the dressing room.

Pompey were unable to make the free-kick count, though, as Carl Baker’s delivery evaded everyone and went behind.

Calvin Andrew then did well to nip in ahead of Christian Burgess and head behind Baker’s dangerous corner.

The hosts went close again from the resulting flag-kick, as Pitman found space to nod narrowly past the post.

But the Blues were dealt a blow of their own late in the first half, with Holmes-Dennis going down injured on the left.

He limped off to be replaced by Lowe, with Gareth Evans dropping to right-back and Talbot moving across to the left.

The first half had been rather slow to get going, but the second exploded into life after just 34 seconds.

It was a fine effort from PITMAN, who picked the ball up on the left and – through a mixture of skill and persistence – found space to slot it into the net.

There was soon an opening for the visitors at the other end of the pitch, although Ollie Rathbone dragged his effort wide.

Rochdale then won a free-kick 25 yards out, but Reece Brown could not quite force his shot through the defensive wall.

An error from Josh Lillis almost handed Pompey a second goal on 69 minutes, with the keeper tearing off his line to try to beat Chaplin to the ball.

But he only succeeded in chesting it into the path of Lowe, whose cheeky lob landed narrowly wide of the post.

Jackett made his second substitution moments later, with Chaplin making way for Kal Naismith in the Blues attack.

And Lowe made way on 81 minutes – although there was nobody to replace him after the substitute was shown a red card.

He stretched to win the ball, but caught Jamie Allen and Probert decided it was enough to warrant a sending off.

That ensured a more fraught end to proceedings than perhaps was necessary, but Pitman eased those nerves in stoppage-time.

Evans got free down the right and picked out the unmarked striker in the box, with PITMAN expertly guiding his header past Lillis and into the net.

Talbot: I Wasn't Expecting To Play


He was a surprise inclusion when the sides were announced at 2pm on Saturday.


View the photos from Pompey's opening day victory over Rochdale.


It was a dream Pompey debut for Brett Pitman.

Information ahead of Rochdale game

All season cards and paper tickets were posted out ahead of Pompey’s Sky Bet League One opener against Rochdale on Saturday.

However, any season ticket holder who has not received their card/ticket should call the ticket office on 0345 646 1898 today.

We can then arrange for duplicate tickets to be printed, which will be available for collection on Saturday.

They can be collected from the clearly-marked booth behind the Fratton End from 10am and fans are advised to arrive as early possible to avoid queues.

We apologise for any inconvenience caused and look forward to welcoming all supporters for the first match of what is sure to be an exciting season.

There are a limited number of seats still available for Saturday’s game and they can be bought online here.

If any are remaining on the day of the game they can be purchased from the Frogmore Road ticket office, which will open from 10am. 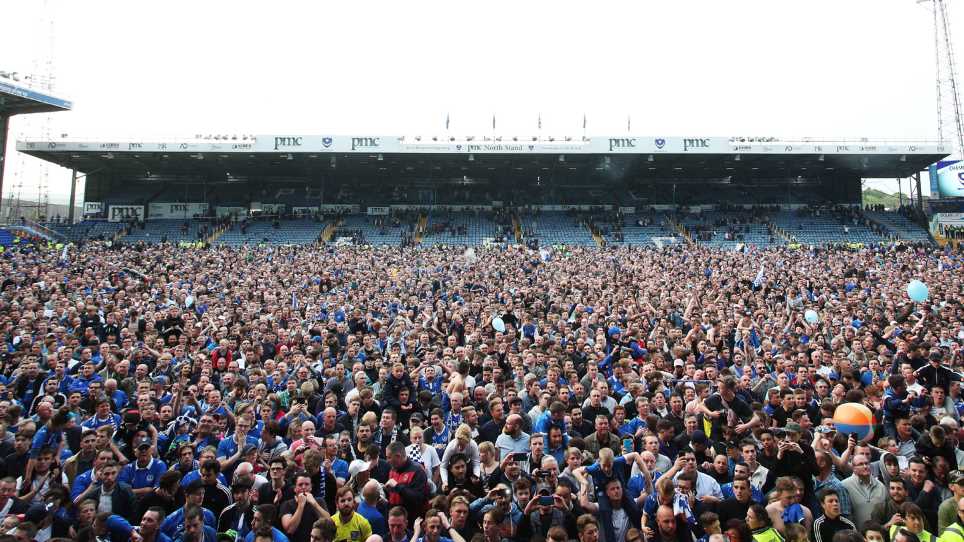 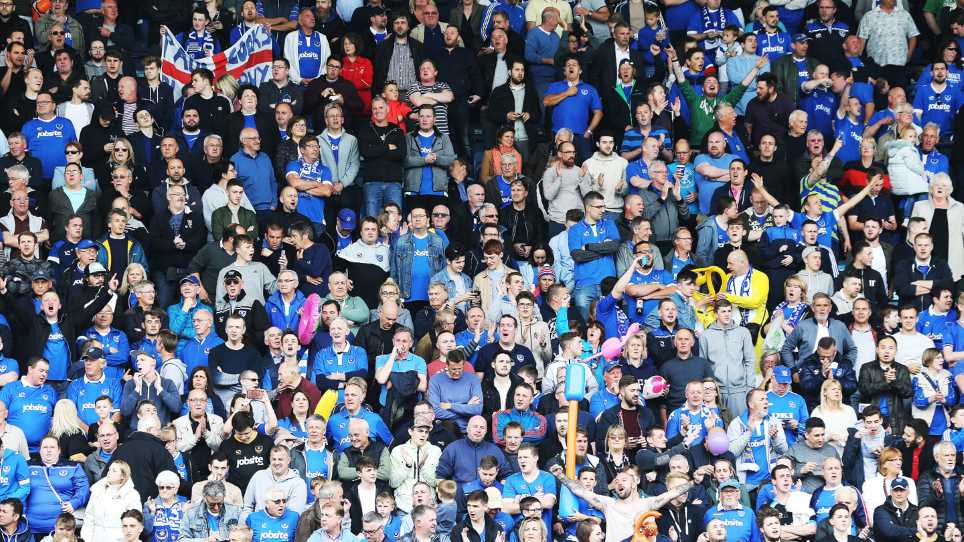 
Secure your seat at Fratton Park