Pompey sit one place – and the same number of points – ahead of their eighth-placed hosts Rotherham.

Fans will no doubt be looking forward to visiting New York Stadium for the very first time, with their last trip to United taking place at Millmoor.

The Blues won 3-2 in October 2002, courtesy of goals from Vincent Pericard, Svetoslav Todorov and Paul Merson, and went on to secure the Division One title.

It was the Millers celebrating victory at Fratton Park earlier in the current campaign, however, with Jon Taylor’s strike enough to secure the points in front of the Sky Sports cameras.

But Paul Warne’s men are without their top scorer, with Kieffer Moore seeing his loan from Ipswich cut short so he could make a permanent switch to Barnsley.

He had notched 13 times in League One during the first half of the season, while their current most prolific frontman, David Ball, has just six goals.

Rotherham are looking to bounce back from a disappointing 2016/17, which saw them finish rock bottom of the Championship – 28 points adrift of safety.

TEAM NEWS
Gareth Evans (hamstring) is not quite fit enough to be able to return to action, while Stuart O’Keefe has undergone surgery on a groin problem that is set to keep him sidelined for 10-12 weeks.

Rotherham will be without Darren Potter (Achilles), but former Blues players Joe Mattock, Michael Smith and Ryan Williams could all feature.

VIEW FROM THE DRESSING ROOM
Read the thoughts of Kenny Jackett and Kal Naismith on Saturday’s game or subscribe for a free iFollow account to watch the below videos.

TICKETS
Seats can be bought from the away ticket office at New York Stadium, although there is a price increase. Click here for more details.

BETTING
Rotherham are the 13/10 favourites with Sky Bet to secure all three points, while the Blues can be backed at 21/10.

🎥 | #Pompey have never played a competitive fixture at @OfficialRUFC's New York Stadium, but the last game we contested at the Millers' old Millmoor ground was a memorable one to say the least... ⬇️ pic.twitter.com/MFFkvAi216 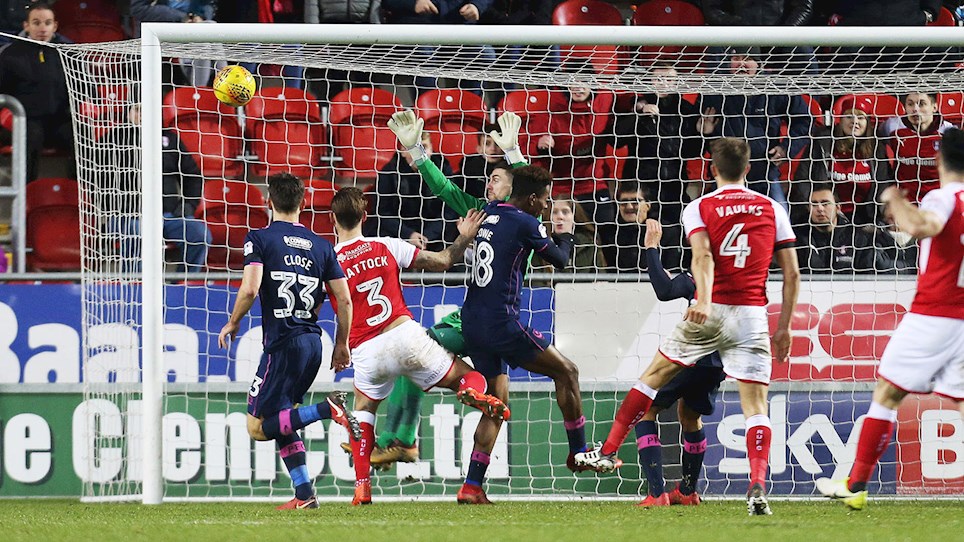 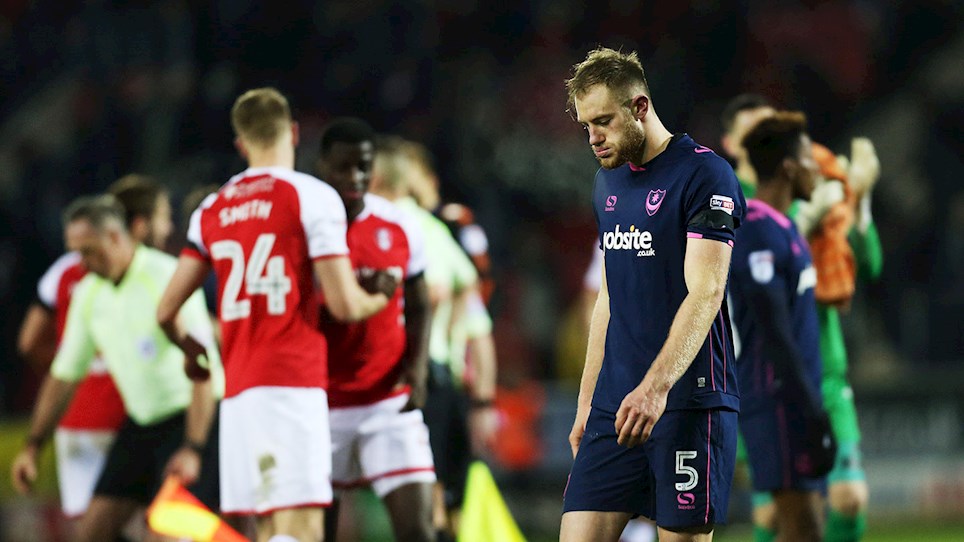 
Any defeat will leave you feeling hurt. Riders Of The Storm


Pompey looked like they had seen off the onslaught to claim a point at Rotherham.

Pompey were cruelly denied a point at Rotherham after conceding a goal in stoppage-time.

It looked like they had done enough to secure a draw after surviving plenty of second half pressure.

But two of their former players combined for the Millers’ late winner, with Michael Smith teeing-up Joe Mattock for a headed finish.

Kenny Jackett made two changes from the side that drew with Scunthorpe on home soil the previous week.

Sylvain Deslandes was handed a debut at left-back, while Matty Kennedy also returned, as Oli Hawkins and Connor Ronan dropped to the bench.

Jackett was facing the club where he had a short spell as manager last term, while former Blues boss Richie Barker was in the opposition dug-out.

The ball was a regular visitor to both ends of the pitch in the early stages, although a lack of quality in the final third meant a goal did not appear likely.

Dion Donohue – in a natural midfield role – made a block to deny Will Vaulks, while Kal Naismith sent a volley wildly over the bar after meeting Kennedy’s cross.

A fierce effort from Jamal Lowe was on target, although it was straight at Marek Rodak and the Millers keeper made a comfortable save.

Pompey did look bright following a quick break up the pitch on 13 minutes, as Deslandes collected the ball from Ben Close on the overlap, only for his cross to be just too high for Naismith.

And a Donohue free-kick that was flighted into the box somehow evaded both Christian Burgess and Matt Clarke as the defensive duo dashed in at the far post.

Both sides then had decent chances to break the deadlock in the space of a few minutes – with the Blues first to threaten.

Lowe chipped a pass up to Brett Pitman and the skipper tried to deftly flick the ball home, but he did not get enough on his header and it flew safely into Rodak’s arms.

David Ball soon had a dig for Rotherham at the other end, with his curling effort taking a slight deflection and sailing narrowly over the bar.

There were certainly not too many clear-cut attempts, though, with the home fans growing frustrated by some wasteful finishing.

Donohue had one last effort before the break and although his drive took a deflection off Vaulks, it was not enough to deceive Rodak.

The first half had drifted towards a conclusion, but Rotherham came charging from the blocks at the start of the second.

First, Luke McGee had to leap on the ball when Ryan Williams’ delivery was turned back into the centre by Richie Towell.

A series of corners then caused chaos in the Blues box, with the Millers going closest to scoring from the first of them.

Richard Wood’s header was blocked in a crowded box and Nathan Thompson then charged down Vaulks’ follow-up effort.

Another flag-kick was soon sent back into the danger zone, though, and this time an unmarked Wood skewed wide.

But Pompey then had an opportunity of their own, with a commanding Rodak punch preventing Naismith from converting Lowe’s cross.

Jackett made a double switch on 66 minutes, with Pitman and Deslandes withdrawn for Hawkins and Ronan.

Smith soon worked his way into the Blues box, but Burgess was there to make a block and deny his former team-mate.

Corners were certainly proving a problem for Pompey and when one was met by Smith, the ball pinged around the area before eventually being hacked to safety.

Another soon followed and it was Thompson to the rescue once more, with the defender throwing himself in front of Semi Ajayi’s effort.

Rotherham applied more pressure as the seconds ticked down, but the visitors were holding firm at the back.

They might have even snatched victory late on when the ball fell to Lowe on the edge of the box, but his effort flew over.

Instead it was the Millers celebrating a late goal, as Smith crossed from the right and Mattock rose to head home at the far post.


Any defeat will leave you feeling hurt.

Riders Of The Storm


Pompey looked like they had seen off the onslaught to claim a point at Rotherham.

Tickets are still available for Pompey's match at Rotherham on Saturday.

Blues fans have already snapped up around 1,400 seats for the New York Stadium contest, which kicks-off at 3pm.

Supporters can also pay cash only at Rotherham's away ticket office on the day of the game, although there is an increase in prices.

There is a £1 charge for tickets bought online or over the phone.

*Tickets bought online/over the phone can be collected from Pompey's ticket office until 4pm on Friday or from the away ticket office at Rotherham on the day of the game. 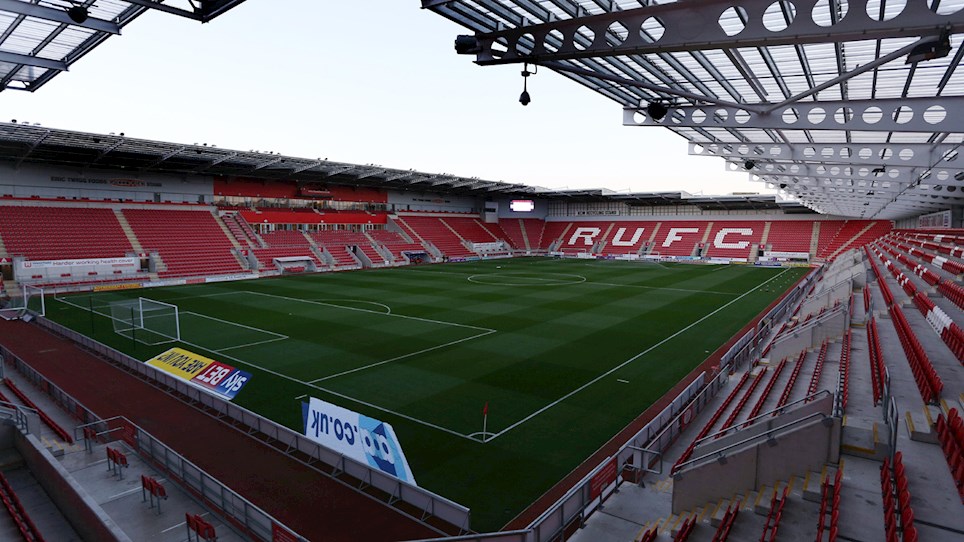 
Tickets for Pompey’s visit to Rotherham go on sale next week.