It has been a fruitful week for Pompey in the transfer market.

The duo could make their first appearances for the club in Saturday’s pre-season friendly at Bognor (1.30pm kick-off).

And Jackett is delighted to add the duo to his squad ahead of the 2017/18 League One campaign.

The Blues boss said: “We’re very pleased to have brought a goalkeeper and centre-forward in.

“They’re obviously big positions in the squad that were needed and very good additions to what we already have.

“In terms of forward options, I felt we needed an experienced player and Brett’s someone with a record of scoring goals and winning promotion.

"They’re obviously big positions in the squad that were needed."

“It wasn’t quite working for him at Ipswich, so we’ve been working hard to bring him down. Being a south coast lad, he fits the bill for us.

“His brain takes him into dangerous areas and he has good touch and awareness. When he does get chances, he has a useful habit of finishing them.

“We’re delighted that he’s here with a few weeks of pre-season still to go, as we build up to the Rochdale game.

“I saw Luke on loan at Peterborough last season and he more than held his own, so I was confident in him coming back to League One.

“It’s good that he has experience of this division and at 21, his best years are obviously ahead of him. We’ll be working hard with him to make sure he fulfils his potential.

“He’s a very good shot-stopper and has an all-round game, but he still needs to keep working and take this opportunity.”

Jackett said: “Clarke will maybe miss a month of the season. It’s frustrating because he started well, although hopefully a lot of his rehab period is taken up by pre-season.

“We’re hoping that Nathan will be near being back when we start the season, although he won’t have trained and will need to get fit.”

Tickets for Saturday’s match at Nyewood Lane are priced £10 for adults and £5 for juniors (under 18) and can be bought on the gate. 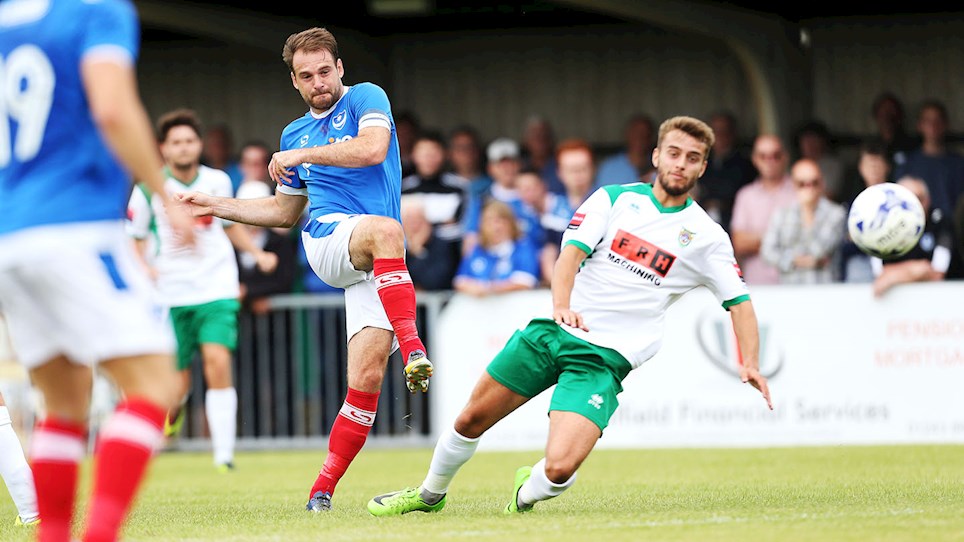 Brett Pitman bagged a brace in his first Pompey appearance to secure another pre-season victory for Kenny Jackett’s side at Bognor.

He netted at both ends of a contest that often drifted along, although fellow debutant Luke McGee made a fine stop in the second half.

The Rocks were certainly not over-awed against their higher-level opponents, but they rarely threatened to secure a share of the spoils.

The visitors made a bright start and Conor Chaplin hit a clean effort from 25 yards that flew narrowly past the post.

And the diminutive striker was involved in the goal that saw them break the deadlock with just five minutes on the clock.

He beat Rocks keeper Dan Lincoln to a poor Sami El-Abd back-pass and squared for PITMAN to slot home his first goal for the club.

The advantage was almost doubled moments later, but Lincoln got down to palm clear Carl Baker’s angled drive.

After that early flurry, however, the match soon settled into more traditional pre-season fare, with fans more interested in visiting the bar than watching what was unfolding on the pitch.

Bognor started to enjoy more possession as the half progressed and Ollie Pearce was let down by a poor touch after latching onto a ball over the top.

There was also a Baker corner at the other end that Christian Burgess was unable to divert on target.

But it was pretty slow going until Pompey finally started to show more attacking intent just before the break.

Adam May should have strengthened their lead, but fired a shot straight at Lincoln from inside the box.

Bognor’s keeper then made sure he was not beaten at his near post from Gareth Evans’ drilled effort.

The second half got off to a sedate start, although Kyle Bennett flashed a long-range attempt narrowly wide.

There was not much else to excite a healthy Nyewood Lane crowd, though, with clear-cut openings at a premium.

Tom Davies headed a free-kick wide, while a shot from May was blocked by his former team-mate Chad Field.

And an effort from Danny Rose just past the hour mark took a deflection and looped just wide of the post.

It was certainly Pompey looking more likely to add to the scoring and a lunging Pitman could not quite connect with Bennett’s low delivery from the left.

Bognor were left perturbed on 70 minutes when they tried to bring subbed defender El-Abd back on, only to be denied by the officials.

They almost levelled soon after, though, when Davies’ slip let in Tommy Scutt, but McGee came to the rescue with a fine save.

That was then matched by Lincoln at the other end, with the stopper keeping out Pitman’s acrobatic close-range flick after Davies had headed the ball towards goal.

But PITMAN did wrap things up on 86 minutes, neatly controlling Baker’s dinked pass over the defence and slotting home his second of the afternoon.