Pompey will be pleased to get back on the road as they look to stop their descent down the League One table.

Kenny Jackett’s side have yet to taste victory at Fratton Park in 2018, but have claimed two wins on their travels.

Now they face an Oldham outfit that are sitting just two points above the drop zone, with 11 fixtures remaining.

Richie Wellens’ men are on a decent run of form, however, and unbeaten in five matches – emerging victorious in three of those.

They were two goals down in their most recent outing at Bury last Saturday, only to battle back for a share of the spoils.

That show of character will give fans hope that the Latics will be competing in the third tier for a 22nd successive season next term.

Oldham triumphed 2-1 when the sides met on the south coast in September, with Eoin Doyle bagging a brace to down his former club.

And Sam Sodje was infamously sent off when the Blues were beaten on their last visit to Boundary Park back in 2013.

TEAM NEWS
Skipper and top scorer Brett Pitman is available to face Oldham after recovering from a hamstring injury.

But Gareth Evans (hamstring), Stephen Henderson (thigh), Stuart O’Keefe (groin) and Danny Rose (leg) are all out, while Nathan Thompson will serve the final game of a four-match ban.

Oldham captain Anthony Gerrard is a doubt after picking up a calf injury, with Brian Wilson on standby.

VIEW FROM THE DRESSING ROOM
Read the thoughts of Kenny Jackett and Connor Ronan or register for a free iFollow account to watch the below videos.

TICKETS
Seats can be bought at Boundary Park on the day of the game. Click here for more details.

BETTING
Oldham have now become the narrow 13/8 favourites with Sky Bet to secure all three points, while the visitors are available at 17/10.


He was making his first start in more than three months. 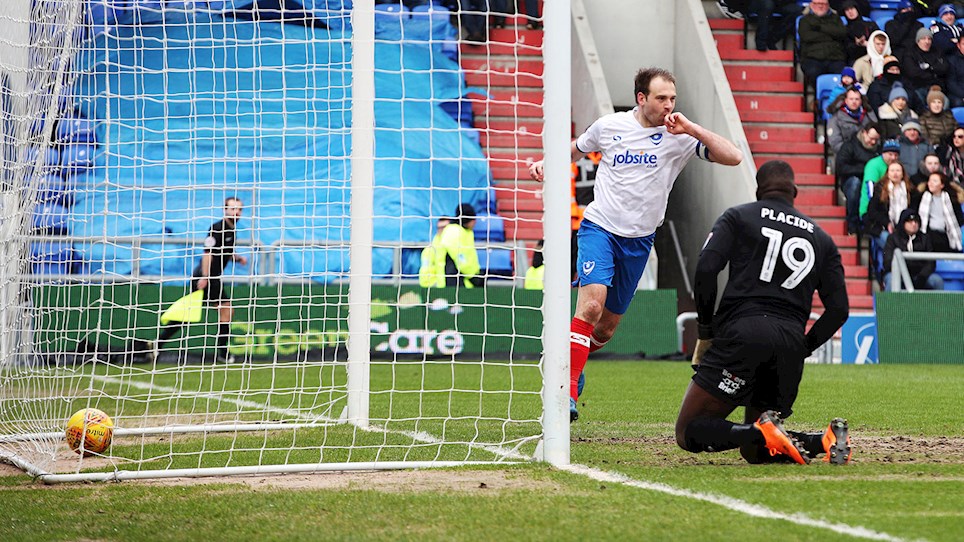 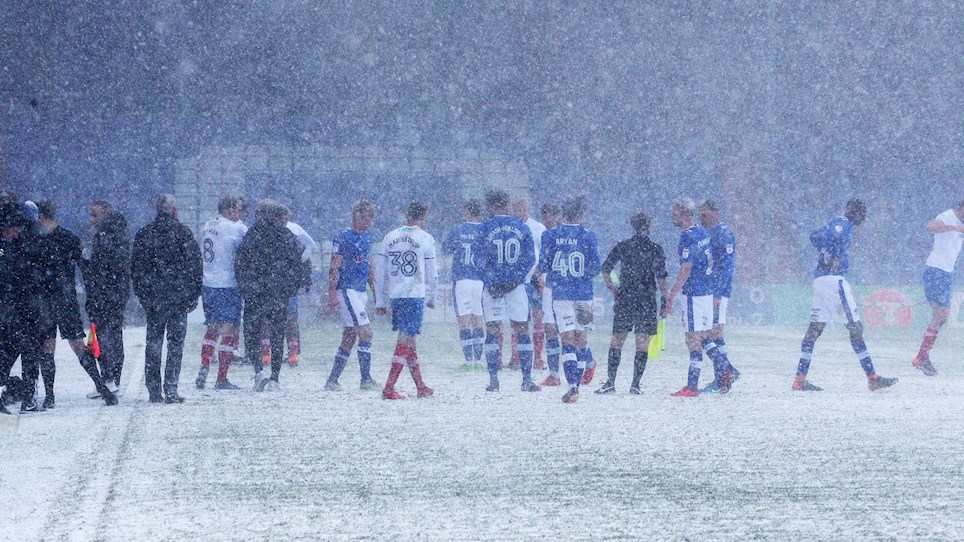 
There were seven members of Pompey’s team aged 22 and under against Oldham, including the entire back five.

by Neil Weld at Boundary Park

Brett Pitman bagged a brace on his comeback, as Pompey returned to winning ways at Oldham.

The striker headed home the opener before taking advantage of some comical goalkeeping from Johny Placide to double the advantage.

With snow falling throughout the game, there were fears that it might be abandoned when play was stopped during the second half.

But it started up again and the Blues saw out the closing stages with relative ease, claiming a clean sheet to complement their three-point haul.

Kenny Jackett made two changes from the side beaten at home by Gillingham the previous week.

Pitman returned from a three-game injury absence to skipper the side, while Brandon Haunstrup also started, as Christian Burgess and Sylvain Deslandes dropped to the bench.

The snow had been falling heavily before kick-off, but bright sunshine had taken over as the sides emerged from the tunnel.

It would not be the end of the white stuff, however, with plenty more flurries following throughout the afternoon.

There were not an abundance of chances in the opening stages, although both sides looked to get forward whenever possible.

Anton Walkes’ failure to deal with a Cameron Dummigan delivery caused a few butterflies, but the right-back recovered well to clear the danger.

Placide was also giving the home support reason to be nervous, with the keeper dallying in possession on several occasions.

One instance saw Connor Ronan tackle him, only for the ball to land clear and let the maverick stopper off the hook.

A quick break presented Oldham with their best chance of the half, only for former Fratton loanee Eoin Doyle to stab his shot straight at Luke McGee.

Jamal Lowe soon had an opportunity at the other end, bursting between two defenders and seeing an effort deflected wide.

And they went even closer soon after, with Matt Clarke sending Dion Donohue’s corner into the mixer, where Jack Whatmough’s header was cleared from the line by Wilfried Moimbe.

But the deadlock was broken on 29 minutes, as PITMAN rose to meet Ronan’s cross and send a deft header past Placide and into the net.

Pompey’s skipper was also proving useful at the other end of the pitch, getting back to nod clear a corner.

The hardy travelling support were then given more reason to cheer when the Blues doubled their advantage before the break.

Placide had failed to learn the error of his ways, with PITMAN stealing the ball from his feet and slotting home from an acute angle.

The Latics were given an opportunity to get back into the contest straight after the restart, when Clarke was booked for a foul on Craig Davies.

Kean Bryan took the free-kick from just outside the Blues box and although his effort went through the wall, it was straight into the arms of McGee.

It was becoming to difficult to spot Pompey’s white-shirted players, as the snow fell more heavily – and began to lay.

There would have been a few worried fans in the Zen Office Stand when referee Sebastian Stockbridge called a halt to proceedings.

“Off, off, off,” cried the Oldham supporters, perhaps in hope more than expectation and – following an eight-minute delay while the lines were cleared – the action resumed.

Doyle then had a couple of shots saved by McGee as the hosts tried to find a route back into the contest.

The second was closest to finding the net, with Pompey’s keeper just about getting his fingertips to it and diverting the ball over.

And McGee also dealt with a low drive from substitute Duckens Nazon, as time started to run out for Oldham.

But the Blues almost wrapped things up on 85 minutes when Pitman teed-up Kal Naismith, only for Placide to put the forward off, with Dummigan hacking the ball clear.

The earlier delay meant 11 minutes of stoppage-time were displayed by fourth official Ken Haycock, giving hope to the home support.

But it was Pompey who almost added to the scoring when Lowe cut inside from the right and drilled a low shot against the inside of the post.


He was making his first start in more than three months.


There were seven members of Pompey’s team aged 22 and under against Oldham, including the entire back five.

Tickets are still available for Pompey’s match against Oldham on Saturday.

Blues fans have already snapped up 750 seats in the Zen Office Stand for the League One contest at Boundary Park (3pm kick-off).

Tickets can also be bought at the Oldham turnstiles (cash only) on the day of the game, although there is a price increase.

Wheelchair/ambulant tickets are priced £10 (£12 on a matchday) or at the relevant junior rates. This includes a carer if on the highest rate of DLA or PIP.

*Tickets bought online/over the phone for this game will no longer be posted out. They can be collected from Pompey’s ticket office until 4pm on Friday or from the main ticket office at Oldham on the day of the game. 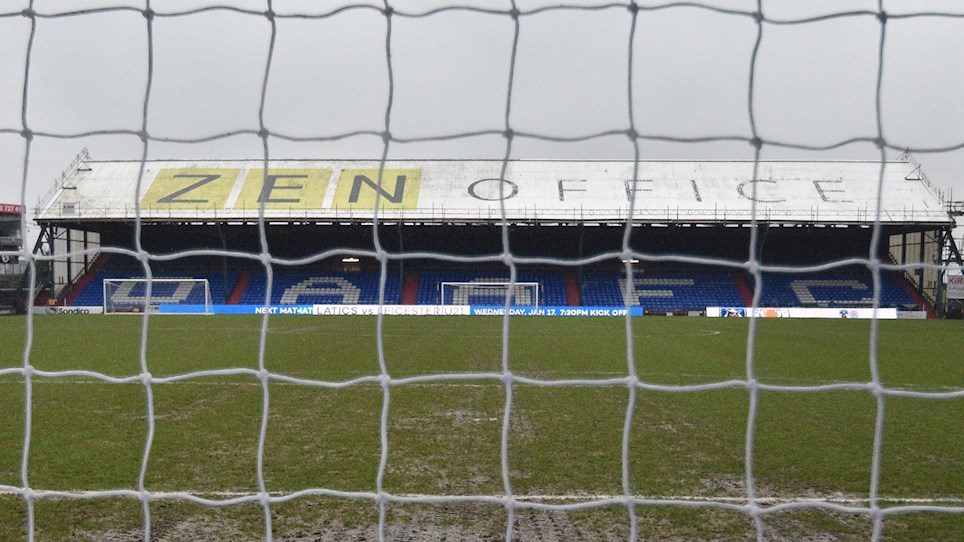 Oldham (A): Tickets On General Sale


Tickets for Pompey's visit to Oldham are now on general sale.


Tickets for Pompey’s visit to Oldham go on sale next week.