Last Saturday’s FA Cup exit at Luton was followed by victory over Charlton to progress in the Checkatrade Trophy.

There is no doubting that climbing the League One standings is the Blues’ number one priority, however.

Three successive defeats to Doncaster, Blackburn and Bradford has left them 14th in the table – five points away from both the play-off spots and relegation zone.

Their opponents are two places higher and the only one of last season’s promoted sides currently above Pompey.

But Blackpool are also searching for a return to form following losses against Blackburn and Northampton, as well as a cup humbling at the hands of Boreham Wood.

Gary Bowyer’s men are in the third tier after seeing off Luton and then beating Exeter at Wembley in last May’s play-off final.

Gareth Evans and Eoin Doyle netted in a 2-0 victory when the sides met at Fratton Park back in February, although it was the Seasiders who triumphed 3-1 in the most recent Bloomfield Road clash.

TEAM NEWS
Pompey will be without Stuart O’Keefe and Nathan Thompson, who are both serving a one-match ban.

VIEW FROM THE DRESSING ROOM
Read what Kenny Jackett and Curtis Main have to say about the game or register for a free iFollow account to watch the below videos.

TICKETS
Seats can be secured from the kiosk next to the away turnstiles (cash only) at Bloomfield Road on the day of the game. Click here for a list of prices.

MATCH COVERAGE
iFollow subscribers can listen to live commentary of Saturday’s game by signing into their account and visiting the match centre.

BETTING
Pompey are 11/8 favourites with Sky Bet to secure all three points, while the hosts can be backed at 2/1. 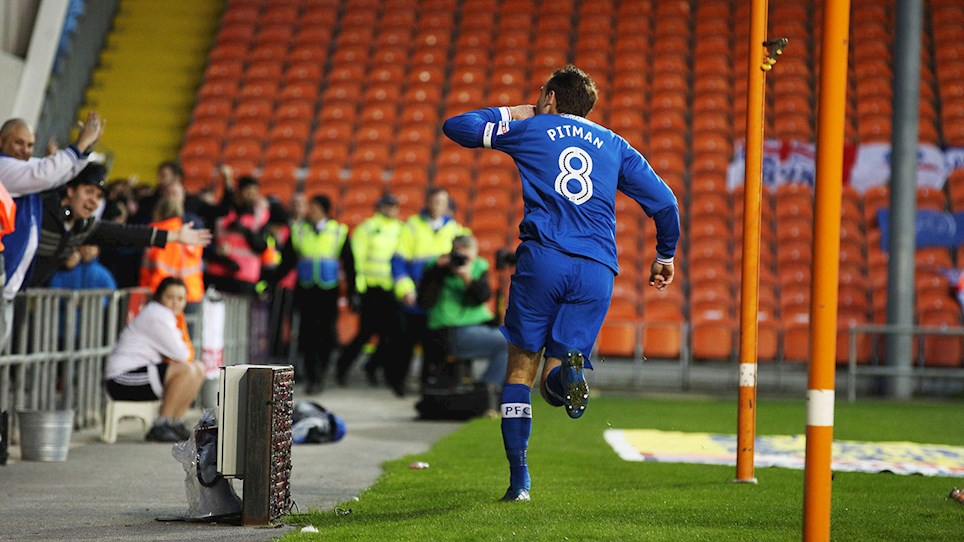 
View the photos from League One success at Bloomfield Road 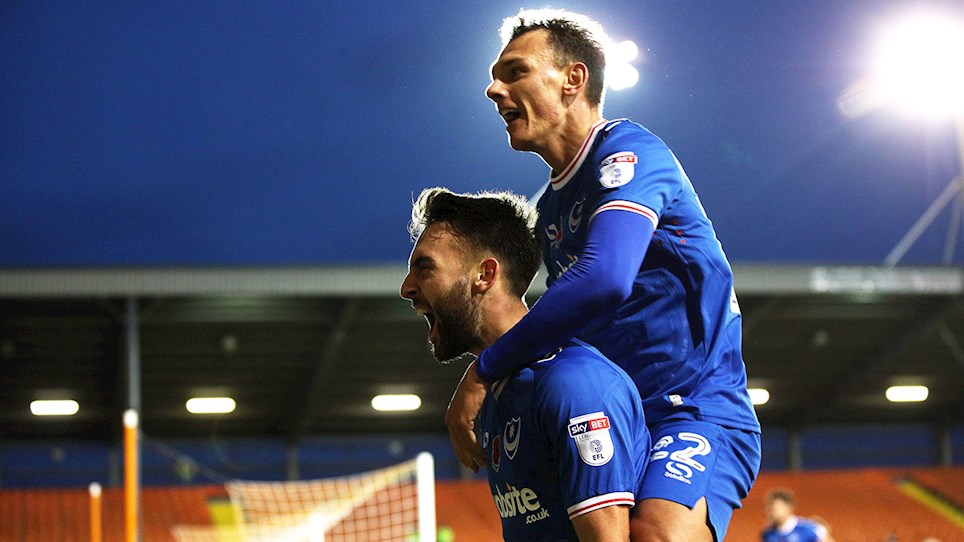 
Like every Pompey fan, he has dreamed about scoring in a blue shirt.


It was difficult to foresee a five-goal thriller at the interval.

Pompey brought their three-match losing league run to an end in dramatic fashion at Blackpool.

A dull first half failed to foreshadow what was to come after the break, with five goals arriving in a topsy-turvy 45 minutes.

Twice the Blues took the lead, first through skipper Brett Pitman and then when Ben Close opened his account.

But twice the Seasiders fought back to level, with Viv Solomon-Otabor and an Oliver Hawkins own-goal giving them hope.

It was Pompey who snatched the victory late on, though, when Pitman grabbed his second of the afternoon to complete a breathless encounter.

Kenny Jackett made four changes from the side that exited the FA Cup at Luton the previous week.

Kal Naismith, Gareth Evans, Danny Rose and Kyle Bennett all returned to the side, with Stuart O’Keefe and Nathan Thompson suspended, Matty Kennedy dropping to the bench and Brandon Haunstrup missing out.

Hawkins was once again used as a makeshift centre-half, with Matt Clarke taking on an unfamiliar left-back role.

Both sides emerged from the tunnel with poppy wreaths and had the flower embroidered into their shirts.

A bugler then paid the Last Post, as everyone inside the stadium paid tribute to those who have made the ultimate sacrifice.

Pompey started with plenty of energy and looked to keep the ball moving, but were unable to breach an organised Seasiders defence.

In fact, there were not many clear-cut openings at either end of the pitch during a first half that often failed to get out of third gear.

The best chance for the hosts came when Jay Spearing’s free-kick found Solomon-Otabor in space, only for the winger to smash his shot over the crossbar.

He also had another attempt deflected behind, while a quick Blues break led to Jamal Lowe’s effort being charged down.

Former Fratton loanee Ryan Allsop was enjoying a quiet afternoon between the sticks, although he would have been relieved when Lowe’s cross hit Will Aimson and ricocheted narrowly past the post.

A couple of corners also caused the hosts a few problems, while Close was not too far off target with a dragged shot from 25 yards.

Luke McGee, meanwhile, twice had to come charging from his line to win a race for the ball, although the home support thought he had handled outside his box on the first occasion.

There had been a distinct lack of excitement before the break, but the temperature rose – at least metaphorically – within seconds of the restart.

A Pompey corner caused havoc in the Seasiders box and Lowe’s shot was blocked, with Pitman unable to get to the loose ball before it was hacked to safety.

The busy Solomon-Otabor then burst down the left, cutting inside and along the edge of the box before hitting a low effort narrowly wide.

But it was the Blues who broke the deadlock on 52 minutes – much to the delight of the large travelling horde.

Close’s attempt took a deflection and although Allsop managed to adjust and parry the ball away, PITMAN was there to mop up.

A quick break from Bennett might have seen them double their advantage, only for Curtis Tilt to recover well and stop Pitman from getting a shot away.

The home support grew audibly frustrated as their side struggled to make any headway in their search for a leveller.

And their annoyance would have grown if Christian Burgess had been able to divert a Naismith corner on target.

But those who remained patient were rewarded on 73 minutes when Nathan Delfouneso combined well with substitute Dolly Menga down the right.

The latter – making his debut – sent in a dangerous low cross and Solomon-Otabor arrived at the far post to turn it home.

That might have deflated the visitors, but – backed by a vociferous following – they managed to retake the lead 10 minutes from time.

Pitman met Evans’ cross and Allsop did brilliantly to keep out his header, but when the ball was not properly cleared, CLOSE was there to fire in his first competitive goal for the club.

The action did not stop there, though, and Blackpool were soon level again, as a cross was sent into the visitors’ box and Hawkins inadvertently headed it into his own net.

But an in an incredible 12-minute spell then swung back in the Blues’ favour when they forged ahead for a third time.

Burgess rose to head a delivery back across the face of goal and PITMAN found space to nod past Allsop.

Blackpool tried their best to fight back once again, but the visitors saw out the closing stages to claim all three points.


View the photos from League One success at Bloomfield Road


Like every Pompey fan, he has dreamed about scoring in a blue shirt.


It was difficult to foresee a five-goal thriller at the interval.

Tickets are still available for Pompey's match at Blackpool on Saturday

Blues fans have already snapped up more than 1,500 seats for the Bloomfield Road contest, which kicks-off at 3pm.

They can be bought online here, by calling 0345 646 1898 or in person from the Frogmore Road ticket office until 4pm on Friday.

Supporters can also visit the kiosk next to the away turnstiles (cash only) on the day of the game.

Wheelchair spaces are priced at the above rates and include a carer if on the highest rate of DLA or PIP. 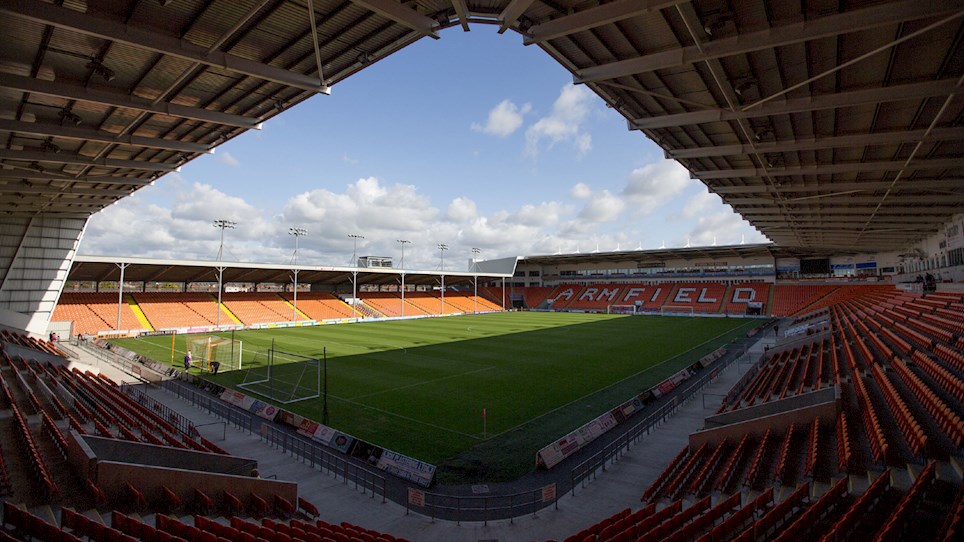 Blackpool (A): Tickets On General Sale


Tickets for Pompey’s league visit to Blackpool are now on general sale.


Tickets for Pompey’s league visit to Blackpool go on sale next week.