The latest chapter in the epic Pompey v Plymouth tale will be written at Fratton Park on Saturday.

A healthy rivalry has built up between the sides in recent years following several epic contests in League Two.

Argyle came out on top in the 2015/16 play-offs, with a last-gasp winner at Home leaving Blues fans heartbroken.

But they had plenty of reason to be cheerful six months ago, as Pompey pipped the Pilgrims to the League Two title on the final day.

Sonny Bradley, Nadir Ciftci, Toumani Diagouraga and Jake Jervis could all feature for Derek Adams’ side against their former club, although Ryan Taylor is currently out injured.

The Devon outfit are in need of points to move away from danger, with Bury currently the only team keeping them off the foot of the table.

But a decent run of form of late has seen them move closer to safety following a disastrous opening to the campaign.

Their worst spell saw 12 games pass without a victory, but Argyle have been beaten in just one of their past seven league outings.

TEAM NEWS
Christian Burgess serves a one-match ban after collecting his fifth yellow card of the season at Peterborough.

Brett Pitman (hamstring) is doubtful for the hosts, while Milan Lalkovic (Achilles), Damien McCrory (knee) and Jack Whatmough (knee) are all out.

TICKETS
Fratton Park is full to capacity for Saturday’s match.

The booths behind the Fratton End will be open from 11am on Saturday to sell tickets for future home games. Click here to find out which fixtures are currently on sale.

Pompey’s ticket office will be open for enquiries and upgrades only, while collections can be made from main reception.

BETTING
Pompey are 8/13 favourites with Sky Bet to secure all three points, while the visitors can be backed at 19/4. 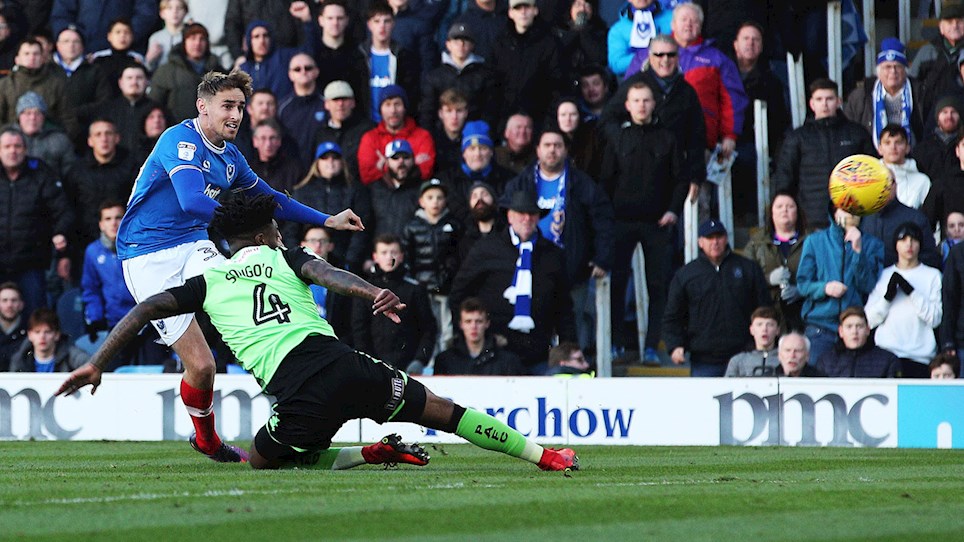 Haunstrup: We Dealt With Plymouth Threats


Pompey had failed to win any of their past five meetings with Plymouth. 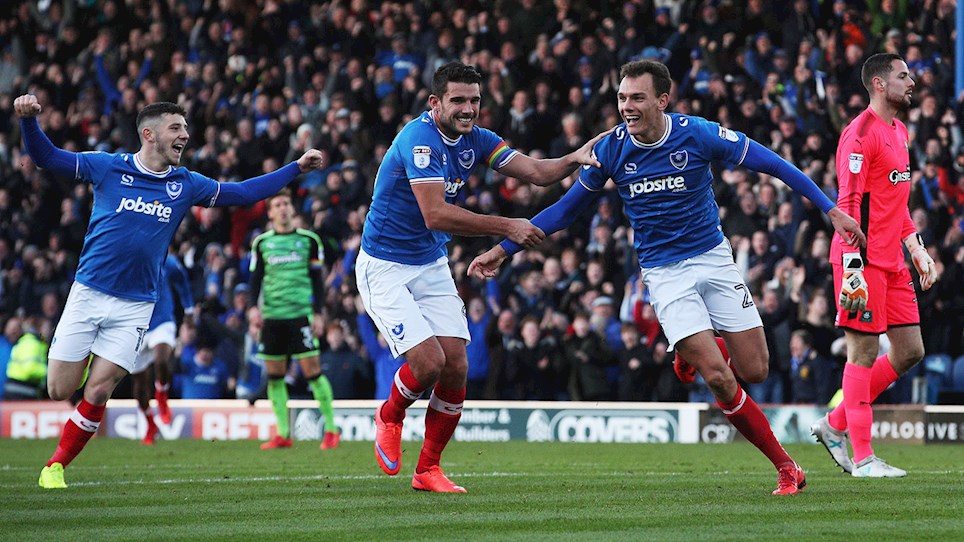 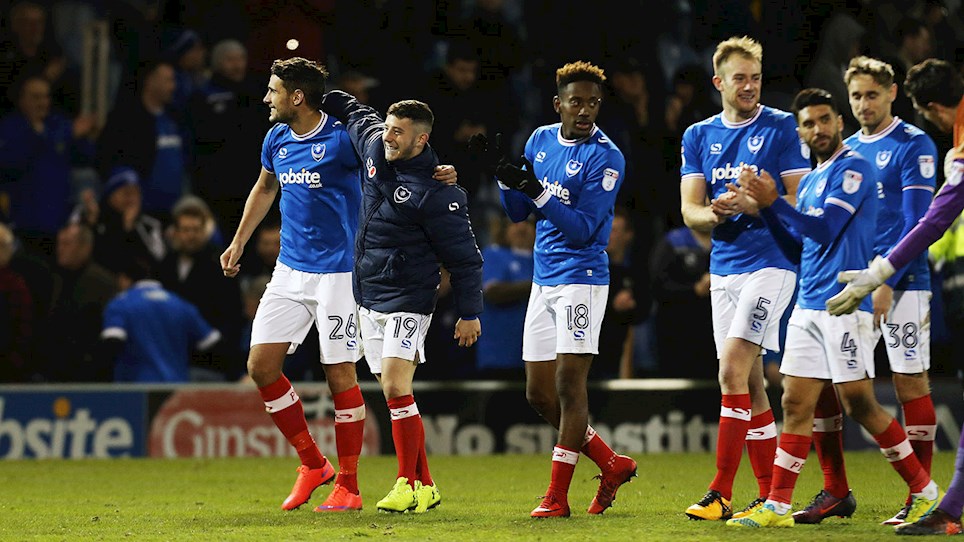 
View the photos from League One victory

Patience Pays Off For Naismith


Kal Naismith was certainly rewarded for his patience against Plymouth.

Kal Naismith capitalised on a defensive howler to ensure Pompey saw off Plymouth at Fratton Park.

He snatched the ball from goalkeeper Remi Matthews and prodded home midway through the first half.

It was a deserved victory for the Blues, even if there were a few nervy moments towards the end of the contest.

Kenny Jackett made three changes from the side that were beaten at Peterborough earlier in the week.

Evans continued to wear the captain’s armband in Brett Pitman's absence – rainbow coloured on this occasion to show the club’s support for LGBT inclusivity – but was pushed into a more advanced role.

There were plenty of familiar faces in the opposition line-up, with Sonny Bradley, Toumani Diagouraga and Jake Jervis all starting, while Nadir Ciftci was on the bench.

After a fairly uninspiring opening, it was the hosts who began to apply pressure as the first half progressed.

The first decent chance fell to Brandon Haunstrup after he was fed by Chaplin and the left-back’s fierce drive was just about palmed over by Matthews.

Matt Clarke – playing in a more familiar central role – then did well to burst forward and square the ball for Evans, whose shot was deflected behind.

Chaplin also had a snap-shot from long-range that was straight at Matthews, but fumbled nervously over by the stopper.

But the Blues were almost caught out at the other end when Yann Songo’o was left in space in the box to meet David Fox’s free-kick, only to guide his header wide.

Instead it was Pompey who broke the deadlock midway through the half – thanks to a huge error from Matthews.

The keeper came out of his area to try to collect Clarke’s long punt forward, but was tackled by the alert NAISMITH.

Matthews tried to tug him back, but the Blues forward kept his composure to poke the ball over the line.

Evans soon had a shot that swerved wide, but Plymouth began to pose some problems as the interval approached.

They were not really creating any scoring chances, although Luke McGee showed good timing to come off his line and dispossess Joel Grant.

There was an immediate chance for Pompey after the restart, but although Naismith’s shot had plenty of power, it was straight at Matthews.

And the keeper made amends for his earlier error with a stunning save to prevent Naismith from turning in Chaplin’s low cross.

Oliver Hawkins then had a shot deflected behind from the resulting corner, while Plymouth nervously dealt with another set-piece moments later.

But Jackett was forced into a switch just before the hour mark when Hawkins pulled up injured and had to limp off.

Kennedy was brought on to replace him, with Evans moving to right-back and Thompson switching to the centre.

Pompey gave away some sloppy free-kicks in the quest to protect their lead, as Argyle tried to get men forward.

They almost scored a second on 75 minutes, though, when Songo’o diverted Kennedy’s teasing delivery narrowly past his own post.

And there was another great opportunity when Chaplin stole possession and slipped Naismith through on goal.

Matthews came out of his box and the pair collided, with the ball rolling against the post before play was stopped so both players could receive treatment.

Naismith was initially cleared to continue, but soon had to depart and was replaced by Stuart O’Keefe.

There was a hint of nervousness creeping into Pompey’s performance as the seconds ticked down, but the visitors were unable to capitalise.

One throw did cause problems in the Blues back-line, although the danger passed when Diagouraga swiped at thin air.

The display of six additional minutes certainly caused some nerves among the Fratton faithful, but the hosts saw out the closing stages to secure the victory.

Haunstrup: We Dealt With Plymouth Threats


Pompey had failed to win any of their past five meetings with Plymouth.


View the photos from League One victory

Patience Pays Off For Naismith


Kal Naismith was certainly rewarded for his patience against Plymouth.