Pompey go in search of their first ever victory over MK Dons when the sides meet at Fratton Park on Saturday.

The statistic becomes less remarkable, however, when you consider that they have only faced off on two previous occasions.

Both of those 2012/13 contests finished all square, with a 2-2 draw in Buckinghamshire followed by a 1-1 stalemate on the south coast.

If the Blues can break their duck then it will be the first time they have won successive league games this season.

They currently sit one place above their opponents in the table, even if it is only goal difference separating the sides.

MK Dons were beaten 4-1 at home by Bradford last weekend, although that was only a second loss from the past 10 games.

Robbie Neilson’s troops have won three and lost three of their six league matches on the road, with victories at Plymouth (1-0), AFC Wimbledon (2-0) and Bury (2-0).

Now both teams will be looking to claim the spoils and try to close the three-point gap on the play-off places.

TEAM NEWS
Christian Burgess and Milan Lalkovic are both available for selection after recovering from calf and Achilles problems respectively.

Conor Chaplin (hamstring) is not quite ready to feature, while Adam May (ankle), Damien McCrory (knee), Brett Pitman (knee) and Jack Whatmough (knee) are all injured.

Aaron Tshibola serves a one-match ban for the visitors, who will also be without Peter Pawlett (thigh).

VIEW FROM THE DRESSING ROOM
Read what Kenny Jackett and Nathan Thompson have to say about the game or register for a free iFollow account to watch the below videos.

TICKETS
Supporters can buy tickets online here. On the day of the game they will be available from the booths behind the Fratton End.

BETTING
Pompey are 4/5 favourites with Sky Bet to secure all three points, while the visitors can be backed at 18/5. 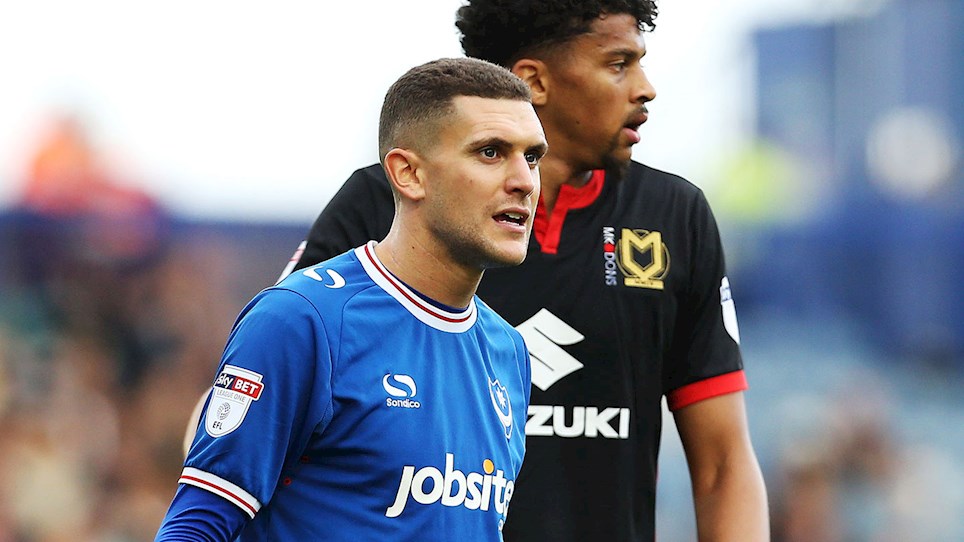 
Stuart O’Keefe hailed Pompey’s victory over MK Dons as their best display of the season so far. 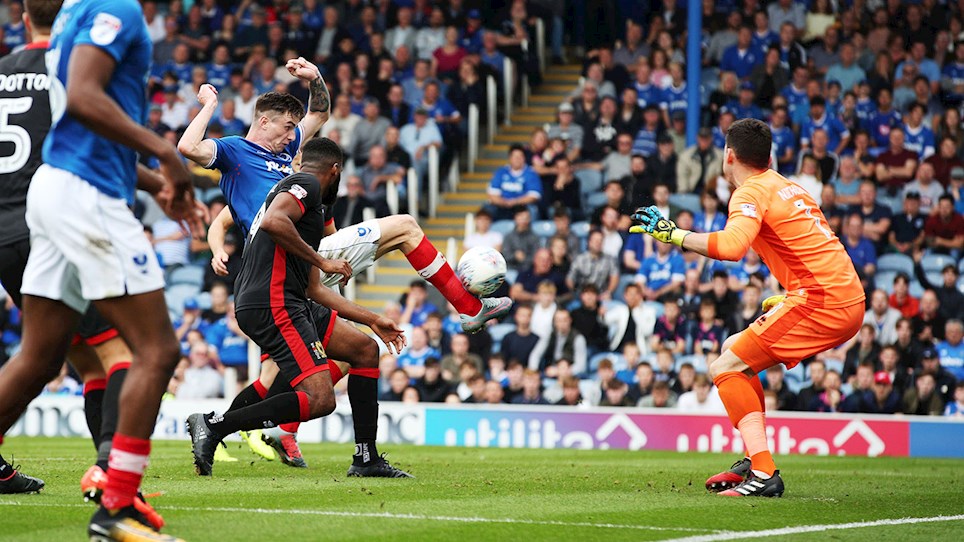 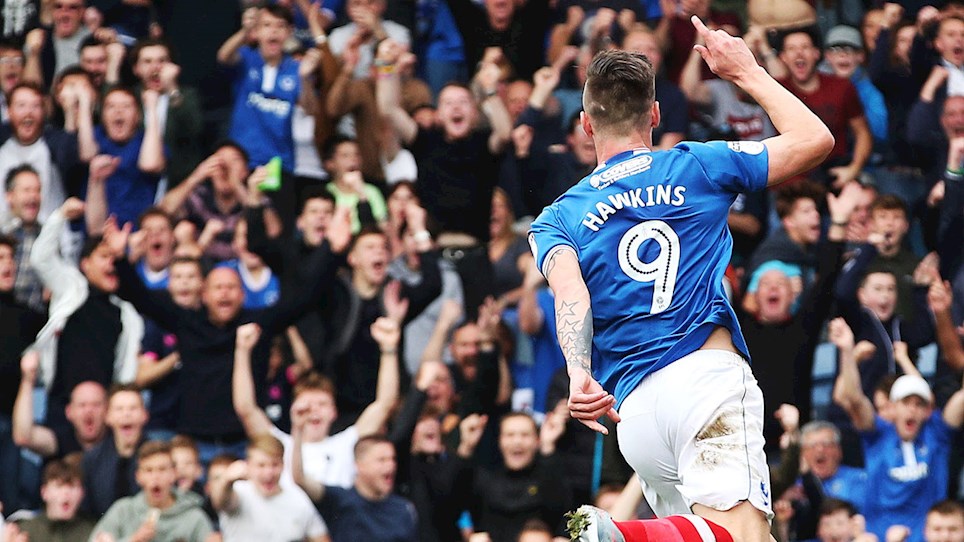 
View the photos from Pompey's League One victory at Fratton Park 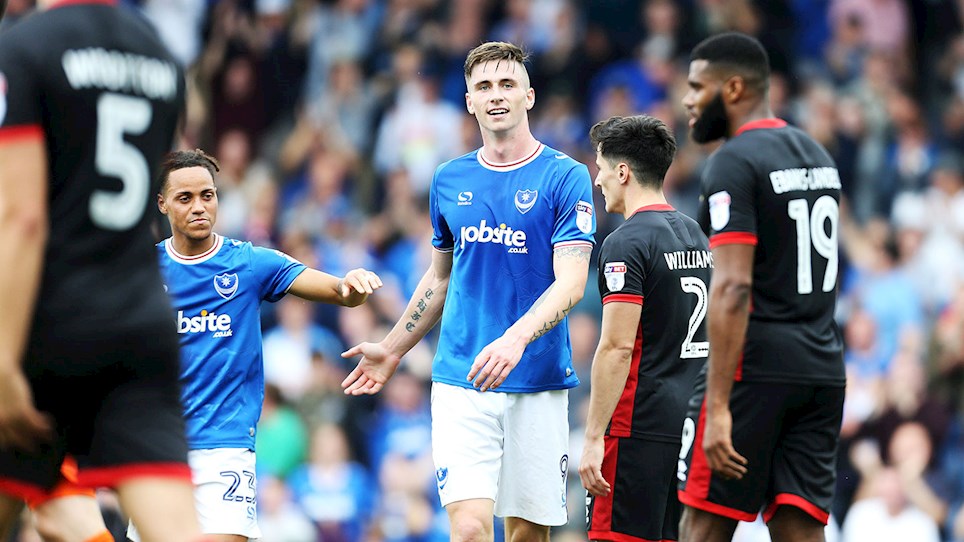 
It has certainly been a successful seven days for Oliver Hawkins.

A brace from Oliver Hawkins ensured that Pompey beat MK Dons to secure successive league wins for the first time this season.

Both goals arrived in a first half that was almost completely one-sided, as the visitors struggled to deal with the Blues’ attacking play.

Hawkins was the beneficiary of some good work from the hosts’ wide players, as he converted crosses from first Matty Kennedy and then Jamal Lowe.

It was no surprise that the Dons were better after the break, but they did not do enough to test Luke McGee.

Kenny Jackett made one change from the side that won at Gillingham the previous week.

Christian Burgess had recovered from a calf injury to start in defence and make his 100th appearance for the club, allowing Hawkins to move to a more natural position up front.

A slight niggle ensured that Curtis Main was the man to miss out, with Stuart O’Keefe continuing to wear the captain’s armband in Brett Pitman’s absence.

The visitors had an early chance when Osman Sow got past Matt Clarke, only for the centre-back to recover well and win the ball back.

But after that it was a first half that saw Pompey enjoy almost total dominance, as they poured forward at every opportunity.

Kyle Bennett burst free down the right and Kennedy just got a touch to his cross to take the ball away from the advancing Lowe.

But the deadlock was broken on 14 minutes – and Kennedy had a large part to play in giving the hosts the lead.

He intercepted a sloppy pass from Ethan Ebanks-Landell and burst past the Dons defender before teeing-up HAWKINS for a powerful finish into the roof of the net.

There was a scare for both teams when Kennedy and Callum Brittain disappeared over the advertising hoardings at the Fratton End.

But the Blues winger soon reappeared and, after some treatment, the visiting right-back was able to continue.

Lee Nicholls was looking nervous between the MK Dons sticks and was perhaps lucky to win a free-kick after failing to hold Dion Donohue’s corner.

He then made a hash of dealing with Lowe’s centre and would have been relieved to see no Pompey player nearby to take advantage.

Donohue then tried his luck from 25 yards when Kennedy’s free-kick was only partially cleared, but could not send the ball on target.

With the visitors clinging on, O’Keefe was next to try his luck and Scott Wooton had to fling himself in front of the shot.

And Nicholls then charged from his line to dive on the ball following some fine work between Bennett and Lowe on the right.

MK Dons finally threatened late in the half and it took a fine challenge from Clarke to deny Sow after the striker burst through on goal.

But there was still time for Pompey to double their lead prior to the interval, as a persistent Lowe was able to cut the ball back for HAWKINS to turn home from close range.

A Kennedy corner caused issues for the visitors just after the restart, but they were eventually able to scramble the ball clear.

Burgess then had to deal with Gboly Ariyibi’s dangerous low delivery from the right and just about managed to turn it the right side of the post.

MK Dons were looking more of a threat in the second half, but McGee was still a virtual spectator between the sticks.

And Hawkins had a chance to complete a hat-trick on the hour mark, only to swipe at thin air as he tried to convert Kennedy’s cross.

Bennett then missed another decent chance to put the result beyond doubt, firing wide when Lowe’s centre somehow found its way to his feet.

MK Dons might have made the most of that let-off and the Blues survived a couple of nervy scrambles in their box.

Ed Upson then whipped a free-kick into a crowded box and McGee did well to find his way through the bodies and punch clear.

Kennedy received a rousing reception from the Fratton faithful when he made way for Gareth Evans for the closing stages.

And Pompey saw out the final few minutes with relative ease to secure all three points on the sunny south coast.


Stuart O’Keefe hailed Pompey’s victory over MK Dons as their best display of the season so far.


View the photos from Pompey's League One victory at Fratton Park


It has certainly been a successful seven days for Oliver Hawkins.