Pompey are hunting for a second successive away victory when they visit Northampton this evening.

Kenny Jackett’s men are looking to build on their impressive 2-0 triumph at AFC Wimbledon at the weekend.

But the Cobblers were also celebrating on Saturday after finally registering their first points of the 2017/18 campaign.

A goal from Matt Crooks after just 21 seconds proved enough to beat Doncaster and see them climb off the foot of the League One table.

It was a dream start for Jimmy Floyd Hasselbaink, who replaced former Blues defender Justin Edinburgh as manager earlier in the week.

Northampton had lost all of their previous four league fixtures – including 4-1 defeats to both Charlton and Peterborough – and exited the Carabao Cup at QPR.

Supporters will now be hoping that they can put a run together and ultimately improve on last season’s 16th-placed finish.

Pompey fans will have fond memories of their most recent trip to Sixfields Stadium, with goals from Gareth Evans and Conor Chaplin securing a 2-1 triumph in December 2015.

That failed to stop the Cobblers romping to the League Two title, however – a feat that the Blues emulated last term.

John-Joe O’Toole will not feature for the hosts as he requires surgery on a groin problem, while Sam Foley (knee), Sam Hoskins (knee) and Aaron Phillips (thigh) are also injured.

Defender Matt Clarke discusses his recent return from injury and looks ahead to Pompey's midweek trip to Northampton Town.

TICKETS
There will be around 300 tickets available to buy (cash only) from the away cabin at Sixfields Stadium this evening. Click here for a list of matchday prices.

Tickets will be sold on a first come, first served basis and no more are available to buy directly from Pompey.

Overseas subscribers can watch the match live by following the same instructions. They can select commentary by clicking on the settings icon at the bottom of the screen and choosing ‘away’.

BETTING
Pompey are the 11/8 favourites with Sky Bet to secure all three points, while the hosts can be backed at 2/1. 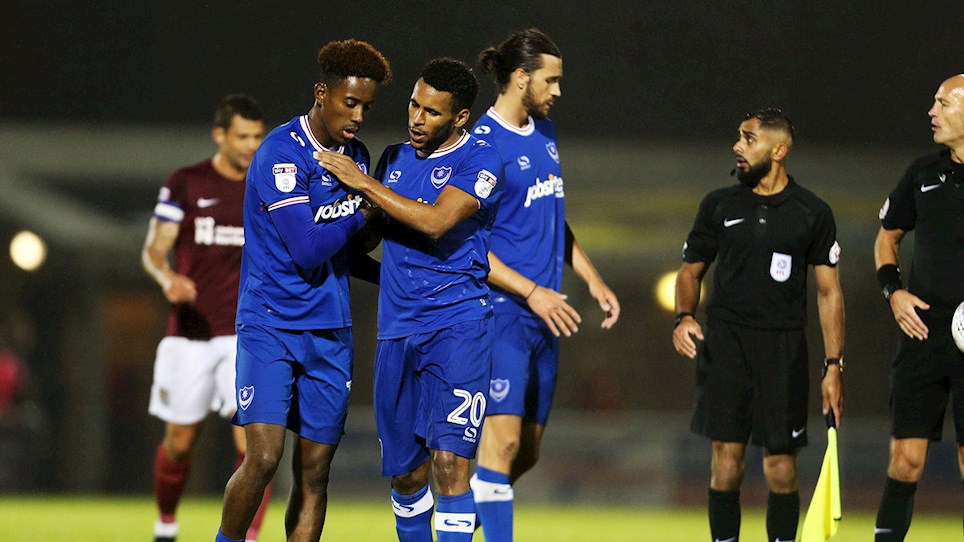 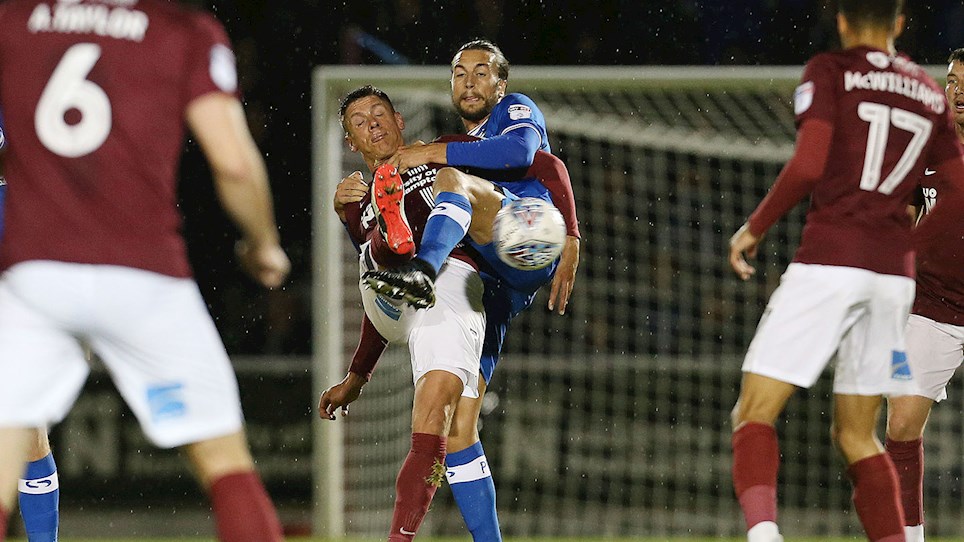 
View the photos from Pompey's defeat to Northampton at Sixfields Stadium 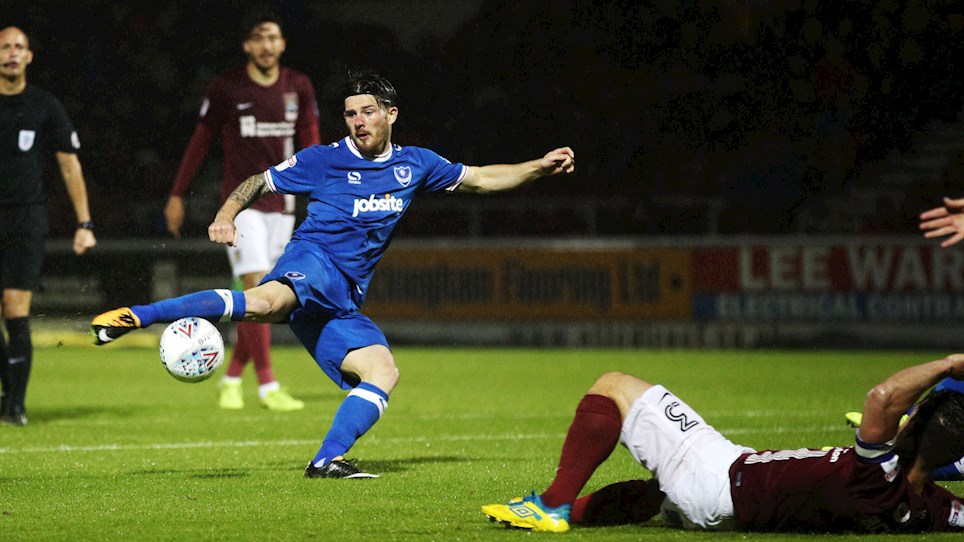 
He netted his first goal in a Pompey shirt. Pompey’s inconsistent start to the season continued as they were beaten 3-1 by Northampton at a sodden Sixfields Stadium.

The visitors were well below-par in the first half and trailed to a Chris Long strike and Matt Clarke’s unfortunate own-goal.

But they dominated after the break and Matty Kennedy deservedly pulled one back, with several more chances to level the game soon following.

A healthy travelling support were not able to celebrate a leveller, however, and Long netted again for the hosts to wrap up victory for the Cobblers.

Kenny Jackett made one enforced change from the side that won at AFC Wimbledon three days earlier.

Oliver Hawkins suffered a nasty head wound in that fixture and was replaced up front by Conor Chaplin.

A mixture of driving rain and strong winds made conditions difficult for both sets of players throughout the contest.

Pompey carved out a couple of half-chances in the early stages before Kennedy curled a 20-yard effort narrowly over the bar.

But it was the hosts who almost broke the deadlock on 15 minutes, with Matt Grimes’ free-kick causing confusion between Luke McGee and Clarke before eventually swinging out of play.

It was only a brief respite for the Blues, however, as the Cobblers did forge ahead just a few moments later.

Shaun McWilliams slipped a fine pass through to Long and although McGee came off his line to narrow the angle, the striker neatly slotted home.

Unfortunately, McWilliams’ evening was soon cut short, as he went down injured and had to be stretchered from the pitch.

That did not stop the Cobblers’ charge, though, and some poor defending allowed them to double their advantage on 32 minutes.

Grimes delivered a free-kick from wide on the right and no Pompey player was able to get it clear, with the helpless Clarke only able to turn the ball into his own net at the far post.

It seemed to stun the Blues into action and they had a few opportunities to reduce the deficit before the interval.

Stuart O’Keefe then tried a long-range effort deep into stoppage-time that Matt Ingram did well to tip over the bar.

Pompey had been poor before the break, but whatever Jackett told them during the interval seemed to do the trick.

They came roaring out of the blocks and soon reduced the deficit when O’Keefe teed-up KENNEDY for a fine finish into the bottom corner.

Adam May then had an effort deflected over before Lowe arrived at the far post to head Damien McCrory’s cross just past the post.

The Blues kept pouring forward and Brett Pitman received the ball inside the box, only for some decent Cobblers defending to prevent him getting a shot away.

Lowe then had another excellent opportunity to draw the visitors level, as there was time for him to bring Kennedy’s cross under control before a wild shot that flew wide.

Jackett made his first switch of the evening just before the hour mark, as May made way for Ben Close in midfield.

Lowe seemed to be involved in everything that was happening and soon after being booked for a foul on Daniel Powell, his low centre was deflected into the arms of a grateful Ingram.

It was pretty much one-way traffic and when McCrory’s free-kick was only partially cleared, Kennedy sent the ball back into the box, where it was turned wide by Chaplin.

But rising hopes were dashed on 70 minutes when Northampton scored against the run of play to strengthen their advantage.

There was some good work on the right by Brendan Moloney and Crooks, with the latter’s cross flicked on by Alex Revell for Long to lash home his second of the night.

Pompey, to their credit, kept trying to get the ball into their opponents’ box, but the Cobblers were holding firm at the back.

They forged a decent opening late on, however, when McCrory whipped a fine free-kick into the box, where Christian Burgess’ header was kept out by Ingram.

And the keeper made an even better stop on 87 minutes, flinging himself to the right to palm clear O’Keefe’s cleanly-struck attempt and ensure there was no late drama.


View the photos from Pompey's defeat to Northampton at Sixfields Stadium


He netted his first goal in a Pompey shirt.

Tickets for Tuesday night’s match at Northampton are still available.

Blues fans were allocated around 1,400 seats for the Sixfields Stadium clash (7.45pm kick-off) and almost 1,100 have already been snapped up.

They will remain on sale from the Frogmore Road tickets office or by calling 0345 646 1898 until 5pm today.

Tickets can also be bought online here until midnight and then collected at Northampton on the evening of the game.

Any unsold tickets will be on sale from the away cabin at Sixfields Stadium (cash only) on Tuesday night, although prices will increase.

Wheelchair spaces are priced at the above rates and include a carer if on the highest rate of DLA or PIP. 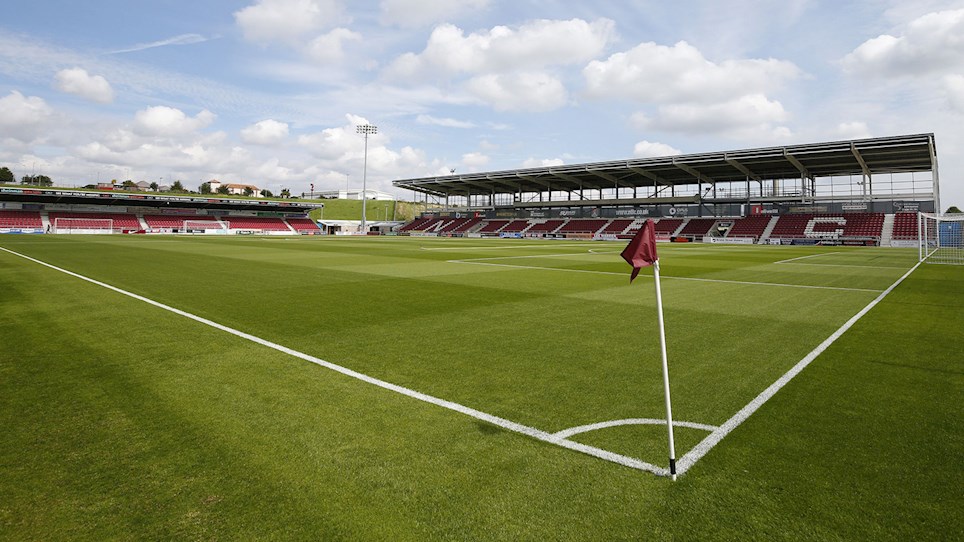 Northampton (A): Tickets On General Sale


Tickets for Pompey’s league visit to Northampton are now on general sale.


Tickets for Pompey’s league visit to Northampton go on sale next week.