Pompey will be searching for home comforts against Bristol Rovers this evening following a disappointing performance on the road at Scunthorpe.

A display more like the one shown against Fleetwood in the last Fratton fixture 10 days ago would certainly help.

Kenny Jackett’s side triumphed 4-1 that day to move into the top half of the table, but have since slipped down to 15th.

That is one place below tonight’s opponents, who go into the game on the back of Saturday’s home win over Blackpool.

Rovers have not enjoyed life on the road quite so much, however, losing three of their four away league matches.

August’s victory at Bury is the only time they have collected all three points away from the Memorial Stadium, although there have been cup successes at both Fulham and Wycombe.

Pompey have come out on top in each of their last four meetings with the Pirates – and three of those contests took place at Fratton Park.

Their most recent win was in the group stage of last season’s Checkatrade Trophy, courtesy of a late strike from Kal Naismith.

Tom Lockyer is available for the visitors after completing a one-match ban, but James Clarke (leg), Daniel Leadbitter (thigh) and Stuart Sinclair (groin) are all injured.

VIEW FROM THE DRESSING ROOM
Read what Kenny Jackett and Oliver Hawkins have to say about the game or register for a free iFollow account to watch the below videos.

TICKETS
Supporters can secure their seat for this evening’s game online here or by visiting the Frogmore Road ticket office.

Home fans buying tickets tonight should visit the booths behind the Fratton End, with the ticket office open for enquiries and upgrades only.

BETTING
Pompey are 10/11 favourites with Sky Bet to secure all three points, while the visitors can be backed at 14/5. 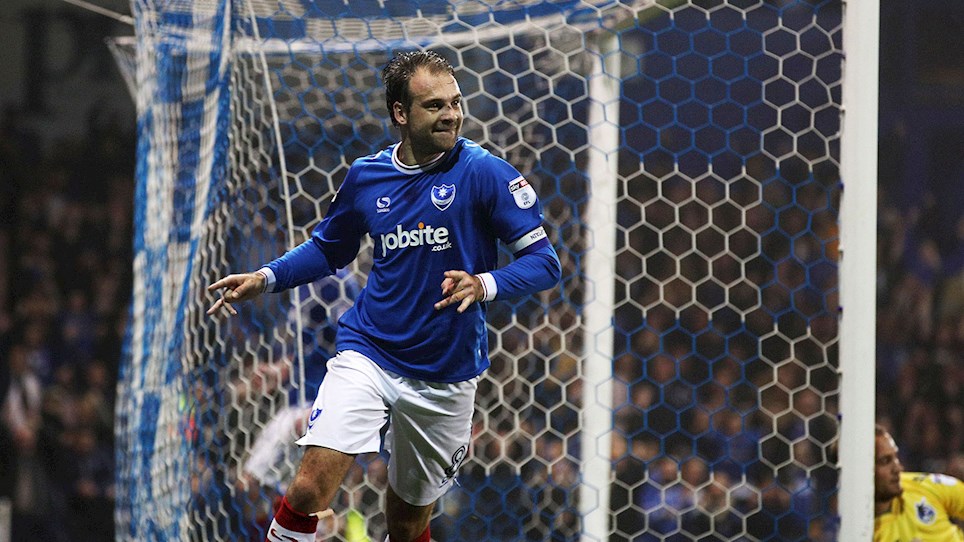 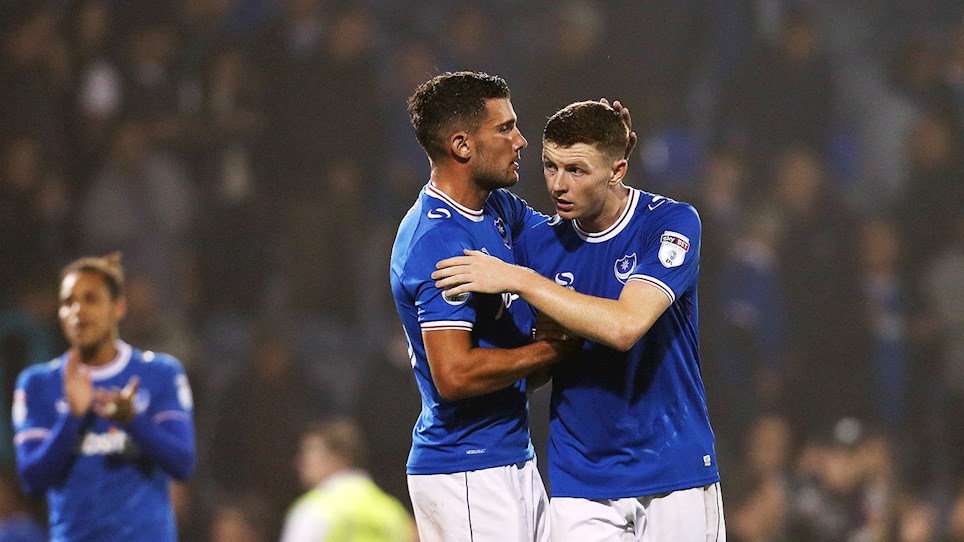 
There were more than 800 Pompey fans making the long trip home from Scunthorpe feeling disappointed on Saturday. 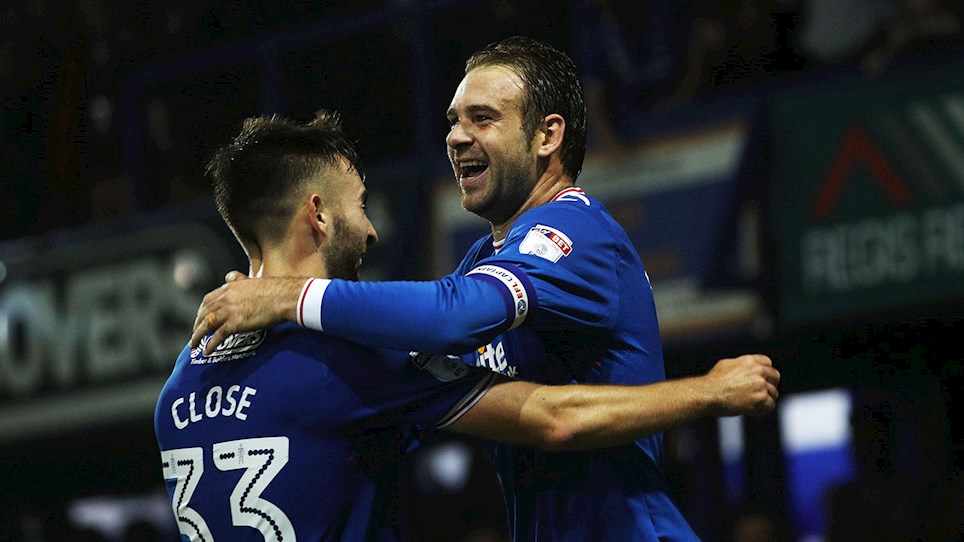 
View the photos from Pompey's League One victory over Bristol Rovers.


Any striker would be eager to get their first goal after signing for a new club.

He headed home just before the interval of an absorbing contest that was often played at a breathless pace.

The Fratton faithful played their part by creating a vibrant atmosphere and Brett Pitman made sure they had plenty to celebrate by adding a second half brace.

Kenny Jackett kept faith with the side that were beaten at Scunthorpe at the weekend.

But there was no place for Conor Chaplin among the substitutes, with his hamstring injury handing Curtis Main a seat on the bench.

The visitors looked dangerous on the break in the opening stages and Christian Burgess got in the way of Ellis Harrison’s strike before Joe Partington’s fine cross somehow evaded Billy Bodin.

Matt Clarke then just about did enough to put off Tom Nichols after the forward had latched onto a ball over the top and advanced on goal.

But the Blues were providing a threat of their own and it took a key interception from skipper Tom Lockyer to prevent Hawkins turning in Jamal Lowe’s teasing delivery at the far post.

The winger sent in another dangerous centre moments later and this time it was Pitman who was unable to get on the end of it.

Limbs were then flying at the other end of the pitch on 21 minutes, with Burgess and Clarke flinging themselves in front of shots from Bodin and Ollie Clarke respectively.

Both sides had a man cautioned before the break, with Stuart O’Keefe penalised for a foul on Partington and Harrison shown a yellow card for tugging back Burgess.

It looked like the players would be heading in all square at the break, but the Blues broke the deadlock – in confusing fashion – on 42 minutes.

Dion Donohue’s first cross was blocked, but his second was perfect for HAWKINS to meet at the back post.

Chris Lines made a valiant attempt to hack the ball from the line, although only succeeded in sending it into the roof of the net.

But celebrations were cut short by a linesman’s flag, only to start back up again when referee John Busby conferred with his colleague and awarded the goal.

Donohue’s set-pieces were proving a dangerous weapon in the Blues’ armoury and one free-kick had to be punched clear.

O’Keefe then tried to convert the loose ball, only for a well-placed Harrison to boot it away and to safety.

Hawkins soon did well to steal the ball from Lockyer and draw a foul, which earned the defender his side's second yellow card.

Pitman was way off target with the resulting free-kick, however, sending the ball high into the Fratton End.

But the Blues skipper showed some fine trickery to dribble the ball along the byline just past the hour mark, although there was nobody in the box to meet his cutback.

There was a scare at the other end when Bodin burst into the box, only for Nathan Thompson to make a fine challenge to dispossess him.

And O’Keefe then managed to get in the way of Liam Sercombe’s shot when the midfielder received the ball on the edge of the area.

But a quick Pompey break really should have resulted in the hosts extending their advantage on 75 minutes.

Thompson started the move by stealing possession and when O’Keefe delivered the ball to the far post, Hawkins could only guide it wide.

PITMAN did make sure of the victory soon after, though, meeting Matty Kennedy’s pin-point cross with a firm header that Sam Slocombe could not keep out.

Hawkins was afforded a standing ovation when he made his way off the pitch to be replaced by Gareth Evans for the final few minutes.

But PITMAN’s evening was not over and he shrugged off the challenge of Lockyer with ease before slamming home Pompey’s third goal to complete a successful night.


There were more than 800 Pompey fans making the long trip home from Scunthorpe feeling disappointed on Saturday.


View the photos from Pompey's League One victory over Bristol Rovers.


Any striker would be eager to get their first goal after signing for a new club.