Pompey continue their search for successive victories when they host Oldham on Saturday.

A 3-0 victory over Bristol Rovers earlier this week helped Kenny Jackett’s side climb up to 11th position in the League One standings.

Their opponents also moved upwards, albeit from bottom to 23rd following a surprise defeat of high-flying Peterborough.

It was the Latics’ first home win of the season and came despite defender Brian Wilson’s dismissal early in the second half.

That result ensured Richie Wellens got off to a great start as interim manager following the departure of John Sheridan at the start of the week.

Former Dutch international Clarence Seedorf – the only man to lift the Champions League trophy with three different clubs – has since emerged as a candidate for the position.

Pompey lost both games 1-0 when the sides were last in the same division back in the 2012/13 campaign.

At least one player has been sent off in each of the four previous meetings, including a controversial dismissal for Sam Sodje four years ago.

TEAM NEWS
Saturday’s game is likely to come too soon for both Conor Chaplin (hamstring) and Damien McCrory (knee), while Milan Lalkovic (Achilles) and Jack Whatmough (knee) are both still sidelined.

Brian Wilson starts a three-match ban for the visitors, while former Fratton loanee Eoin Doyle is out injured.

VIEW FROM THE DRESSING ROOM
Read what Joe Gallen and Christian Burgess have to say about the game or register for a free iFollow account to watch the below videos.

TICKETS
Supporters can secure their seat online here or by visiting the Frogmore Road ticket office.

Tickets can be bought from the booths behind the Fratton End on the day of the game, with the ticket office open for enquiries and upgrades only.

BETTING
Pompey are 8/15 favourites with Sky Bet to secure all three points, while the visitors can be backed at 5/1.

Click here to read our full betting and sign-up at www.skybet.com/pompey for great offers and promotions. Please gamble responsibly. 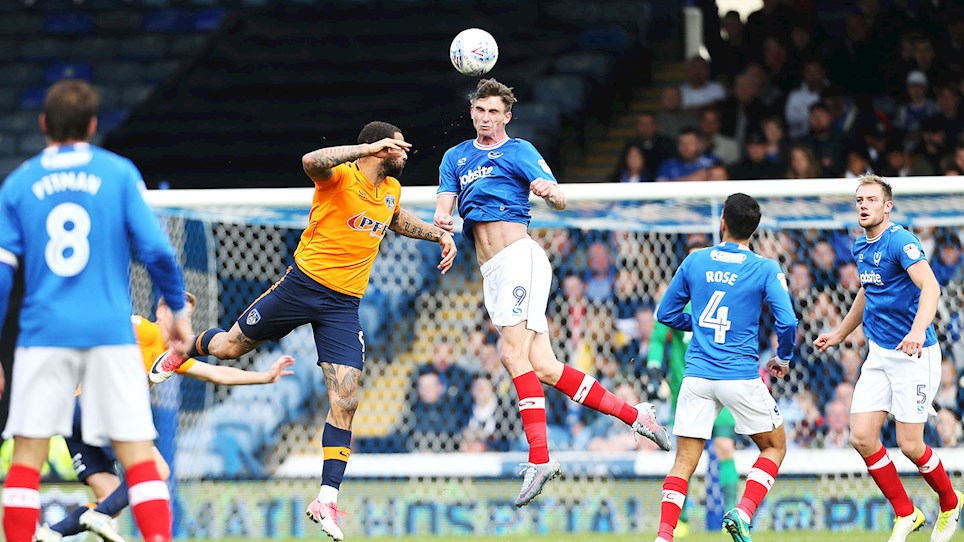 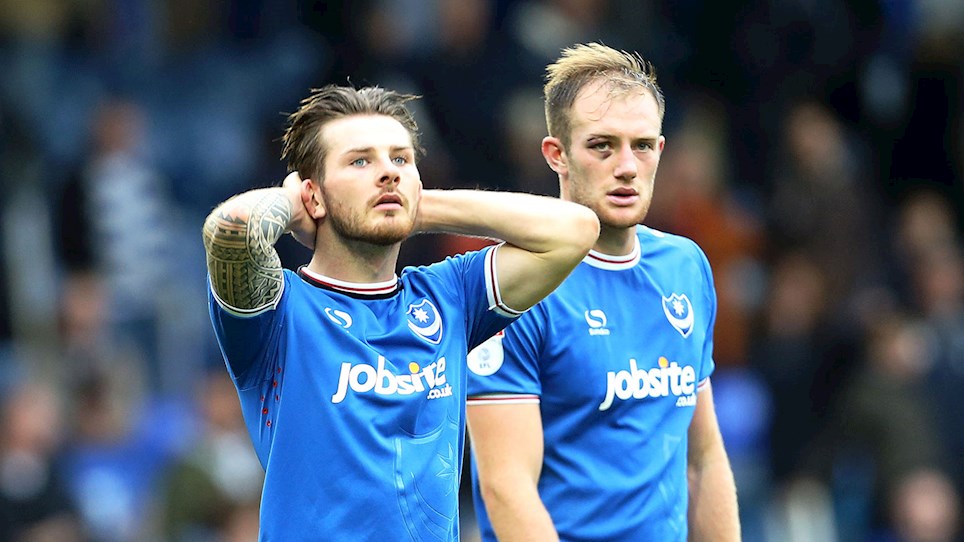 
View the photos from Pompey's League One defeat to Oldham at Fratton Park. 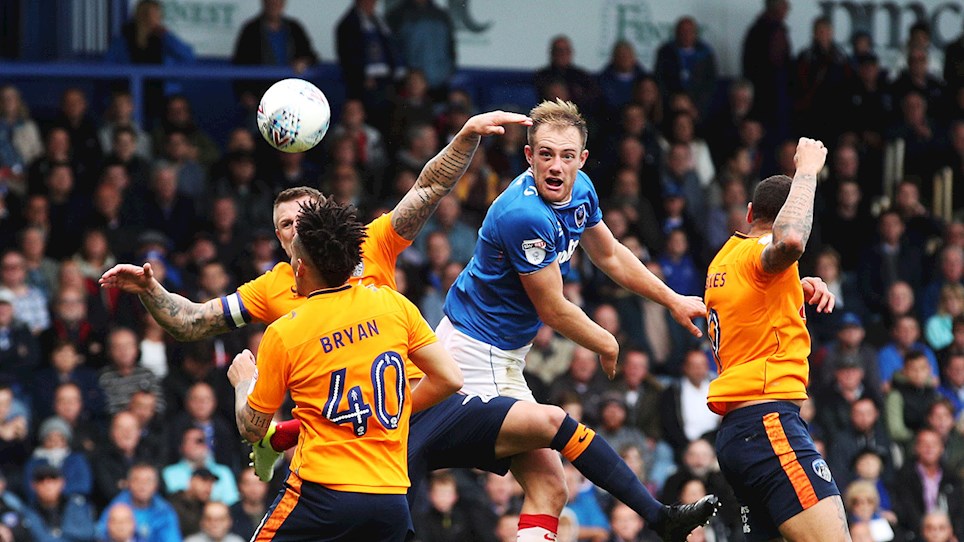 
Pompey have four senior players who are comfortable playing at centre-back. 
Pompey’s defensive injury woes continued in a 2-1 defeat to Oldham.

Eoin Doyle netted twice on his Fratton return as Pompey endured a difficult afternoon on the south coast.

Both sides started the game with an attacking intent, but Oldham were in control from the moment they grabbed their early opener.

It was a game to forget for the Blues, who suffered another injury blow at the back when Nathan Thompson was stretchered off.

And it never really looked like they would salvage anything once Doyle doubled the Latics’ lead just after the interval.

Brett Pitman did pull one back late on to restore some hope, but the hosts were unable to find a dramatic leveller.

Kenny Jackett made one enforced change from the side that beat Bristol Rovers earlier in the week.

Christian Burgess missed out with a calf injury, so Drew Talbot came into the starting 11 and Thompson moved to the centre of defence.

But it appeared to be mind games from the interim Oldham manager, as the striker was named in the team.

And it was Doyle who almost broke the deadlock in a frantic opening to the game, with his 25-yard effort cannoning against the post.

Pitman then tried his luck from a similar distance and a fine strike was expertly tipped over by Latics keeper Johny Placide.

Pompey’s skipper soon met a low cross from Dion Donohue, but Kean Bryan was well placed to clear the danger.

At the other end, Matty Kennedy’s centre was just about taken off the foot of Oliver Hawkins, who was waiting to pounce at the far post.

But it was Oldham who forged ahead on 16 minutes, when Thompson blocked Craig Davies’ effort and Doyle gobbled up the loose ball.

It soon got even worse for the hosts, as their defensive injury curse continued following a collision between Talbot and Thompson.

The latter came off worse and had to be stretchered from the pitch, with Gareth Evans coming on and Talbot moving to the middle.

Both setbacks seemed to affect the Blues and they struggled to find any fluency at either end of the pitch for the remainder of the first half.

A snap-shot from Byrne had to be acrobatically tipped over by Luke McGee to stop the Latics from doubling their lead.

Pompey did carve open one more decent opportunity before the break, however, following a quick move up the pitch.

The visitors were initially able to deal with the attack, but Jamal Lowe picked up the loose ball and struck the post.

There was a surprise at the start of the second half, as Hawkins moved to the centre of a makeshift defence, with Evans playing off Pitman.

But it was a slip by Clarke that let in Davies, although the striker’s effort did not cause McGee too many problems.

Oldham did not let their hosts off for a second time, though, and after Hawkins had done well to intercept the danger, Doyle dispossessed Talbot and neatly dinked home his second of the game.

He came close to adding a third on 56 minutes, only for McGee to quickly leave his line and smother Dan Gardner’s ball over the top.

Some more slack defending saw Davies left in acres of space at the far post, although the striker could not quite rise high enough to guide Gevrao Nepomuceno’s cross on target.

Talbot was brought off on the hour mark to be replaced by Kyle Bennett and the newcomer had an immediate chance to reduce the deficit, but could not turn Kennedy’s centre on target.

The third and final switch soon followed, with Ben Close making way for Danny Rose in the middle of the park.

But those changes failed to result in a change of fortunes, as Pompey continued to labour against their energetic visitors.

Pitman was clearly struggling with an injury, but with the Blues having already made all their substitutions, he had to continue

And PITMAN seemed to shake it off, continuing his remarkable scoring streak late on by slotting in from Lowe’s cut-back.

The display of eight minutes of additional time made the Fratton faithful believe that a point could be salvaged.

But despite their best efforts, Pompey were unable to find another goal, as Oldham held on for the victory.


View the photos from Pompey's League One defeat to Oldham at Fratton Park.


Pompey have four senior players who are comfortable playing at centre-back.


Pompey’s defensive injury woes continued in a 2-1 defeat to Oldham.