Football fans around the country were enthralled by the frantic bits of transfer business conducted on Thursday.

And it was the busiest deadline day in recent memory at Fratton Park, with four players arriving on the south coast and another four departing.

But now the window has slammed shut and the focus turns back to what happens on the pitch.

Blues supporters will have to wait an extra day for their football fix, however, with their game against Rotherham put back a day to accommodate the Sky Sports cameras.

On Sunday (2.30pm kick-off), Kenny Jackett’s side host a team that were relegated from the Championship last term.

Jackett was the second of three permanent managers at New York Stadium that campaign, but was there for just 39 days before departing and being replaced by current boss Paul Warne.

His choice of assistant earlier in the summer was Richie Barker, who had a short spell in charge of Pompey between December 2013 and March 2014.

Rotherham are currently 19th in the League One standings, having won just one – a 5-0 rout of Southend – of their four fixtures.

Their last visit to Fratton Park was also for a televised game on a Sunday, with Pompey’s 3-2 victory in April 2003 securing the second tier title.

Nathan Thompson is also in line for his Blues bow, having been out with a foot injury since the start of pre-season.

He would come in at right-back to replace Gareth Evans, who serves a one-match ban following his red card at Wigan last week.

The game might come too soon for Matt Clarke, who has returned to full training, while Drew Talbot (hamstring) is sidelined.

Rotherham striker Jamie Proctor has been ruled out for the rest of the season with a knee injury, while Lee Frecklington, former Blues loanee Joe Mattock and Will Vaulks are all doubts.

TICKETS
Fans can secure their seat online here and take advantage of cheaper prices for buying in advance.

MATCH COVERAGE
iFollow subscribers can listen to live commentary of Sunday’s game by signing into their account and visiting the match centre.

Please note that there is no live video stream for overseas subscribers, as this match has been selected for television coverage.

BETTING
Pompey are 21/20 favourites with Sky Bet to secure all three points, while the visitors can be backed at 5/2. 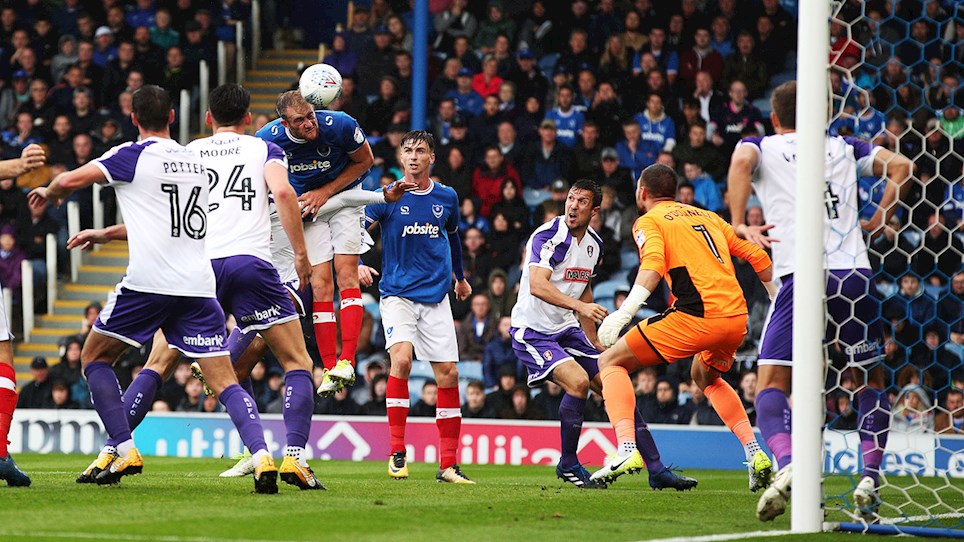 
View the photos from Pompey's defeat to Rotherham at Fratton Park. 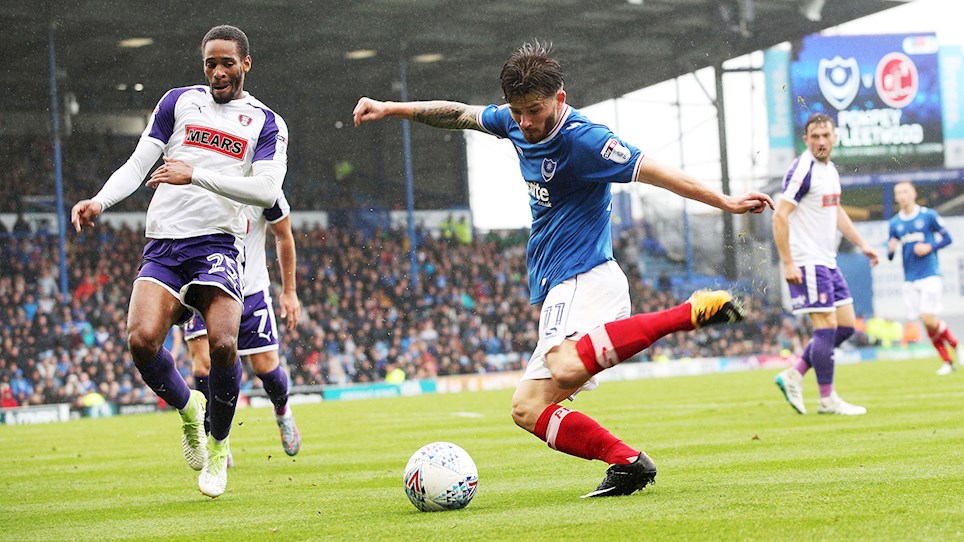 Kennedy: Long Journey Worth It


He was the final player to arrive at Pompey before the transfer window slammed shut. 
There were four Fratton debutants on the pitch when the second half kicked off.

Jon Taylor netted the only goal during the first half of a televised contest that improved as it went on.

The Blues were much better after the break, but were unable to convert any of the numerous chances they carved out.

Kenny Jackett made four changes from the side that drew at Wigan the previous week.

He handed debuts to Stuart O’Keefe and Oliver Hawkins, while fellow deadline day signings Damien McCrory and Matty Kennedy had to be content with a place on the bench.

Matt Clarke returned from the groin injury that had kept him sidelined since pre-season and there was also a start for Conor Chaplin.

That saw a switch to a 3-4-1-2 system, with Brandon Haunstrup and Jamal Lowe occupying the wide roles, and skipper Brett Pitman playing behind Chaplin and Hawkins.

The rain was falling heavily when the game got underway and the action on the pitch was doing little to brighten the mood.

It was a fairly lethargic opening to proceedings, with both sides struggling to keep hold of the ball, perhaps hindered by the wet conditions.

The first chance fell for the hosts, though, and Pitman ran at the Rotherham defence, beat his man and fired narrowly over the bar.

But the Millers soon threatened themselves, with Michael Ihiekwe failing to find the target before O’Keefe bravely blocked Lee Frecklington’s effort.

Kieffer Moore than tried his luck from the edge of the box, but could not make a clean connection and the ball bobbled safely into Luke McGee's arms.

There were not too many clear-cut openings, but the Blues did have opportunites to break the deadlock.

Instead it was Rotherham who took the lead on 36 minutes, as Taylor latched onto a ball down the right and lashed home a powerful strike.

Pompey immediately set about trying to find a leveller and Clarke failed to divert Chaplin’s corner on target.

A superb cross Haunstrup cross from wide on the left was then headed over by Lowe, as the hosts went in behind at the break.

Jackett made a change of personnel and system for the start of the second half, with a return to four at the back.

Jack Whatmough and Chaplin both failed to emerge from the tunnel and were replaced by debutants Nathan Thompson and Kennedy.

And the latter made in instant impression with a cross that Millers keeper Richard O’Donnell could not get to.

The ball landed at the feet of Lowe at the far post and he took a touch before sending in a low drive that was deflected behind.

Pompey fans were baying for a penalty when Hawkins took a boot to the face on 57 minutes, although referee Gavin Ward was not interested.

There was then a lighter moment just past the mark, as Pitman and Kennedy both tried to keep the ball in play and the former ended up taking out the latter!

The hosts were looking much more dangerous than before the break and when a bandaged Hawkins met May’s free-kick, his header had to be cleared from the line by Darren Potter.

Jackett made a final throw of the dice on 70 minutes, with Hawkins given a generous ovation as he made way for Kal Naismith.

But the Scottish forward was getting patched up on the sidelines following a challenge with O’Donnell when the Blues came close to levelling on 79 minutes.

It was a dangerous low ball into the box from a slightly out-of-position Clarke, but a stretching Lowe could not quite make a connection at the far post.

Pompey poured forward in the closing stages, which were played out almost entirely in Rotherham’s half.

And the display of six additional minutes gave the Fratton faithful hope of salvaging something, but the visitors held on for victory.


View the photos from Pompey's defeat to Rotherham at Fratton Park.

Kennedy: Long Journey Worth It


He was the final player to arrive at Pompey before the transfer window slammed shut.


There were four Fratton debutants on the pitch when the second half kicked off.

Fans are advised to secure their seat in advance and take advantage of cheaper ticket prices.

The quickest and easiest way to buy is via our eticketing site.

But supporters can also call 0345 646 1898 or pay a visit to the Frogmore Road ticket office (please note that the ticket office and phone lines are closed on Saturday).

Subject to availability, tickets will be available on the day of the game from the booths behind the Fratton End, which open from 11am.

The ticket office will also be open from 11am on Sunday for upgrades and enquiries only, with phone lines also until 1pm. Supporters collecting tickets can do so from main reception.

Please note that, due to the game being televised live, there will be fewer than 100 car parking spaces available for fans.

*Includes carer if on highest rate of DLA or PIP.
**Accompanied by a paying adult, senior or ambulant supporter.