Pompey begin another busy week of League One action with a long trip north to play Scunthorpe on Saturday.

It is sure to be a tough test against a side that currently sit sixth in the standings, having collected four more points than the Blues.

But The Iron have not won either of their two most recent fixtures at Glanford Park, collecting a point against Blackpool before being beaten by Blackburn.

They do go into the contest on the back of a victory, however, following last Saturday’s 1-0 triumph at Doncaster.

Graham Alexander’s side might have been playing Championship football this weekend, finishing just four points adrift of the automatic promotion spots last term.

And the play-offs did not prove to be an adequate consolation, as they were beaten 3-2 on aggregate by Millwall to miss out on a day at Wembley.

Pompey and Scunthorpe cannot be split when you look at the overall record between the sides, with both having claimed eight wins.

But it was The Iron who were celebrating in the most recent clash in February 2014, dishing out a 5-1 thumping to Richie Barker’s Blues.

TEAM NEWS
Milan Lalkovic (Achilles), Damien McCrory (knee) and Jack Whatmough (knee), will be missing for Pompey, but Brett Pitman is available, despite breaking his nose against Fleetwood.

Andrew Crofts (ankle), Joanthan Margetts (knee) and Luke Williams (hamstring) are all sidelined for Scunthorpe, while Charlie Goode (ankle) is a doubt.

VIEW FROM THE DRESSING ROOM
Read what Kenny Jackett and Stuart O’Keefe have to say about the game or register for a free iFollow account to watch the below videos.

TICKETS
Supporters are able to buy tickets – cash only – from the Glanford Park turnstiles on the day of the game. Click here for more details.

Overseas subscribers can watch the match live by following the same instructions. They can select commentary by clicking on the settings icon at the bottom of the screen and choosing ‘away’.

BETTING
Scunthorpe are 7/5 favourites with Sky Bet to secure all three points, while the visitors can be backed at 2/1. 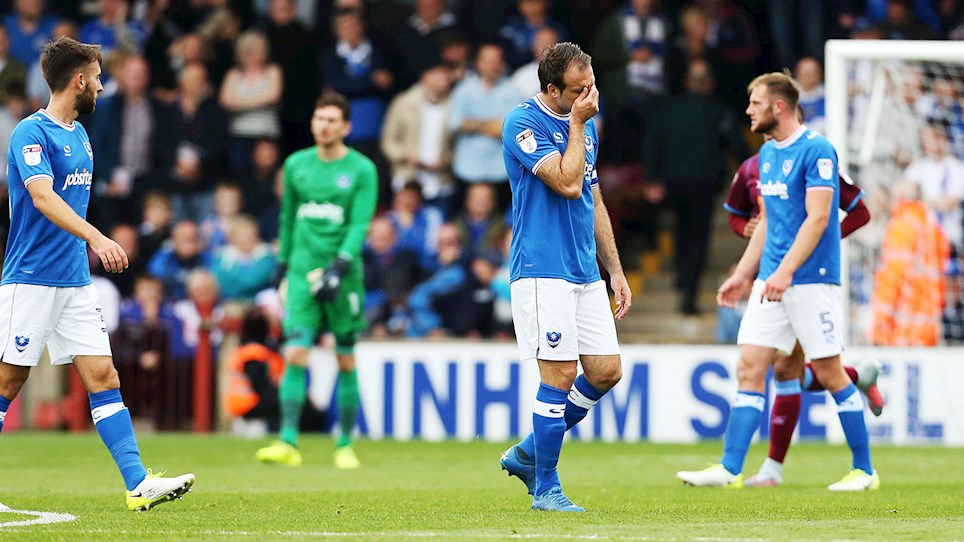 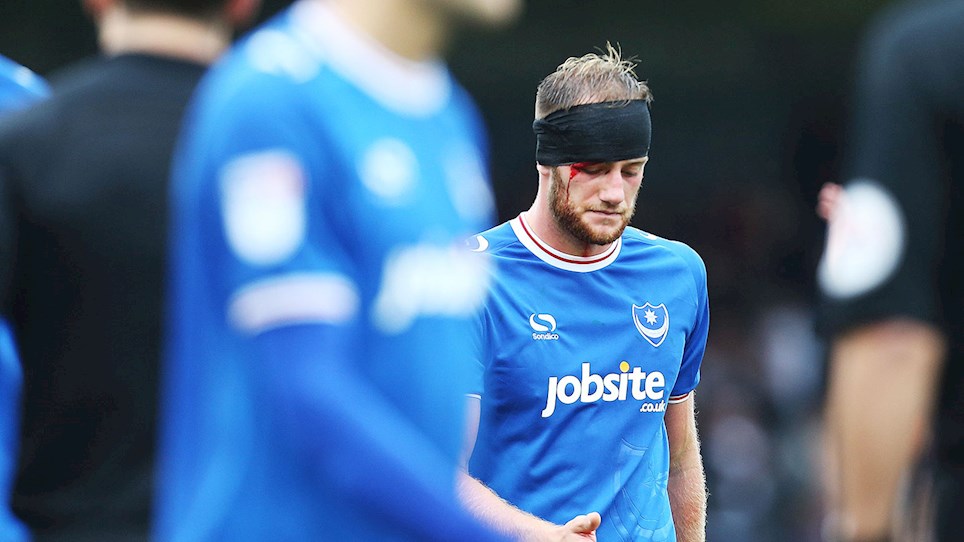 
View the photos from Pompey's League One defeat to Scunthorpe. 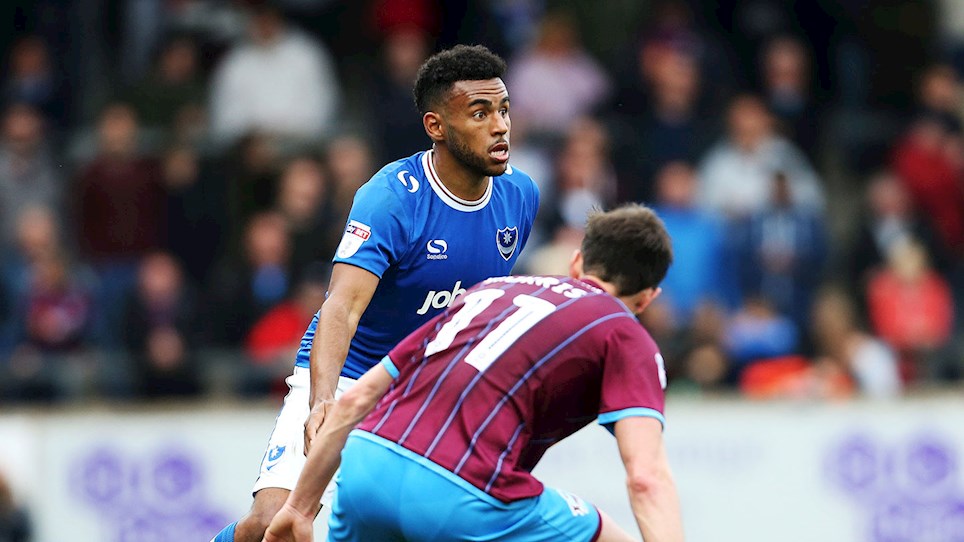 Thompson: We’ll Dust Ourselves Down


Nathan Thompson knows that Pompey have to improve ahead of a busy week at Fratton Park. Jackett: We Couldn’t Break Them Down


Some sloppy play at both ends of the pitch cost Pompey at Scunthorpe.

by Neil Weld at Glanford Park

Pompey’s inconsistent start to the season continued as they left Scunthorpe on the back of a 2-0 defeat.

The damage was done in the first half, with goals from Lee Novak and Duane Holmes giving the hosts a commanding lead.

It was a much more assured performance from the Blues after the break, but they did not really do enough to warrant any return for their efforts.

Kenny Jackett made two changes from the side that beat Fleetwood so convincingly at Fratton Park the previous week.

One was enforced, with Damien McCrory’s knee injury affording Dion Donohue a chance at left-back.

The other switch was up front, with Conor Chaplin dropping to the bench to be replaced by Oliver Hawkins.

But it was the hosts that were quickest to settle and Paddy Madden flashed an angled drive narrowly past the post.

Pompey then had their first sighter, although Brett Pitman’s cleanly-struck effort flew straight into the arms of Iron keeper Matt Gilks.

Scunthorpe were looking more likely to break the deadlock, however, and Novak chipped a shot against the crossbar after bundling his way into space.

And it was Novak who did give them the lead on 12 minutes, steering home after Jordan Clarke had collected Neal Bishop’s cross-field pass and sent the ball into the box.

The Blues were struggling to find any fluency, although Hawkins had a great opportunity to draw them level.

Jamal Lowe brilliantly beat his man down the right and delivered the ball into the area, only for the striker to head wide from just a few yards out.

And the visitors were made to pay for their profligacy when Scunthorpe doubled their advantage just a few moments later.

Donohue was only able to head Lewis Butroid’s teasing delivery straight to Holmes, who coolly steered the ball past Luke McGee and into the net.

Pompey kept fighting, though, and a couple of Donohue corners caused problems in the Iron defence.

The left-back’s free-kick was then headed into Christian Burgess’ path by Hawkins, but the defender mis-kicked the ball into Gilks’ arms.

However, there was an escape at the other end just before the break when Novak failed to get on the end of another excellent Butroid cross.

Pompey, unsurprisingly, came out for the second half with a lot more urgency and Pitman bent a shot narrowly wide following good work from Matty Kennedy down the left.

The hosts then received a blow when Novak when down injured and despite trying to carry on for a few minutes, he was soon replaced by Tom Hopper.

It was the Blues who were dominating possession as the second half progressed, without being able to penetrate the Scunthorpe defence and test Gilks.

A challenge for the ball then saw Matt Clarke become the latest member of the Pompey squad to suffer a cut head and he had to be treated on the pitch by physio Bobby Bacic.

It meant the defender was left with a bandaged head, while Pitman was playing with a broken nose and Hawkins still has a huge scar above his eye.

And it was the latter who made way as Jackett made his first switch on 68 minutes, with Chaplin on to lead the line.

It was Ben Close who was next to try his luck, however, with a volley that was deflected behind after Kennedy’s floated delivery could only be partially cleared.

Jackett made another substitution soon after, as Kennedy was replaced by Kal Naismith wide on the left.

But Scunthorpe threatened to add a third goal on 74 minutes, with a long-range drive from Holmes stinging the palms of McGee.

It was still the Blues playing with more intent, but Gilks was being well protected by an organised Iron back-line.

Burgess was almost the unlikely provider of a goal on 83 minutes, volleying narrowly wide with an acrobatic effort after being picked out in space by Close.

Lowe, unlike last week, was then unable to find the net from a tight angle, as Gilks was finally forced into action.

And Scunthorpe comfortably saw out the closing stages to ensure Pompey made the long journey south without any points.


View the photos from Pompey's League One defeat to Scunthorpe.

Thompson: We’ll Dust Ourselves Down


Nathan Thompson knows that Pompey have to improve ahead of a busy week at Fratton Park.

Jackett: We Couldn’t Break Them Down


Some sloppy play at both ends of the pitch cost Pompey at Scunthorpe.

Tickets are still available for Pompey’s match at Scunthorpe on Saturday.

Blues fans have already snapped up more than 800 seats for the League One contest at Glanford Park (3pm kick-off).

They are available to buy online here, by calling 0345 646 1898 or by visiting the Frogmore Road ticket office until 4pm today.

Tickets can be bought – cash only – at the away turnstiles at Scunthorpe on Saturday, but please be aware that there is a price increase.

Supporters collecting tickets at Glanford Park can do so from the collection window next to the ticket office.

*A maximum of two free child tickets per full-paying adult. If you require these tickets on the day of the game then please visit the Scunthorpe ticket office. 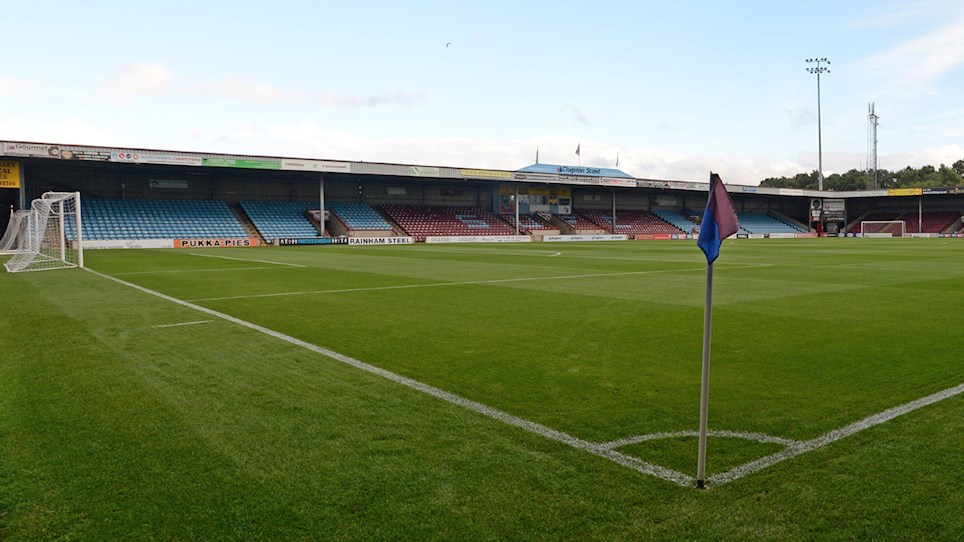 Scunthorpe (A): Tickets On General Sale


Tickets for Pompey’s league visit to Scunthorpe are now on general sale.


Tickets for Pompey’s visit to Scunthorpe go on sale next week.