Pompey will look to make it an excellent Easter by beating Coventry at Fratton Park on Monday lunchtime.

A dramatic victory at Burton ensured that they kept pace in the race for automatic promotion from League One.

And with the Blues now playing before everyone else, they know another win would – for a few hours at least – send them into second spot.

Rivals Barnsley and Sunderland – who both kick-off at 3pm – have tricky away games at Plymouth and Peterborough to negotiate.

But Coventry have more than pride to play for themselves, with an outside chance of still making the play-offs.

A thrilling 5-4 triumph at the Stadium of Light last week was followed by a 2-0 defeat of Bradford, a result that relegated their opponents.

It means the Sky Blues have lost just one of their past seven fixtures, although they are still five points behind sixth-placed Doncaster with just three games left to play.

Whatever happens, it has been an encouraging season back in the third tier after sealing promotion at Wembley last term.

Unfortunately, there is still plenty of off-field uncertainty, with Coventry not sure where they will be playing home matches next season.

Pompey came out on top when the sides met at the Ricoh Arena back in October, courtesy of a fine strike from Ronan Curtis on the stroke of half-time.

Tom Bayliss (arm) and David Meyler (shoulder) are both out for Coventry, with Brandon Mason (hamstring) a major doubt.

There are plenty of former Blues players in the opposition squad, with Conor Chaplin used as a substitute in recent weeks after returning from injury.

Tom Davies and Dominic Hyam – the latter of whom never played during a loan spell at Fratton Park – are likely to line-up in the centre of defence, while goalkeeper Liam O’Brien is also in the Sky Blues squad.

VIEW FROM THE DRESSING ROOM
Read the thoughts of Kenny Jackett on the race for automatic promotion and what he makes of Coventry.

TICKETS
There is limited availability for Monday’s game and tickets can be bought online here.

Subject to availability, they will also be sold from both ticket offices from 9am on the day of the game. Click here for more details.

Please note that, due to the game being televised live, there are fewer than 100 car parking spaces available behind the North Stand.

MATCH COVERAGE
iFollow subscribers can listen to live commentary from Andy Moon and Guy Whittingham by signing into their account and visiting the match centre from 12pm on Monday.

BETTING
Pompey are the 7/10 favourites with Sky Bet to secure all three points, while the visitors can be backed at 19/5. 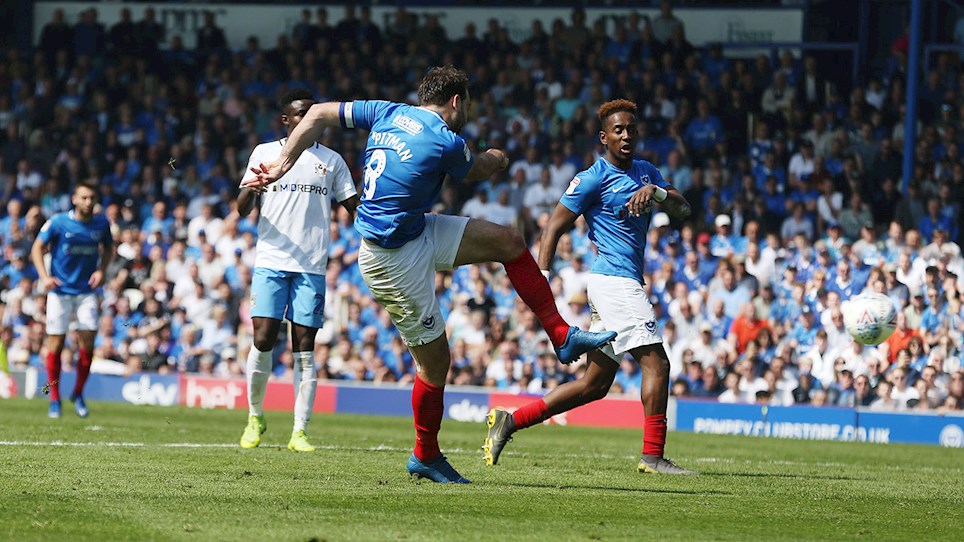 
View the photos from the latest Blues victory 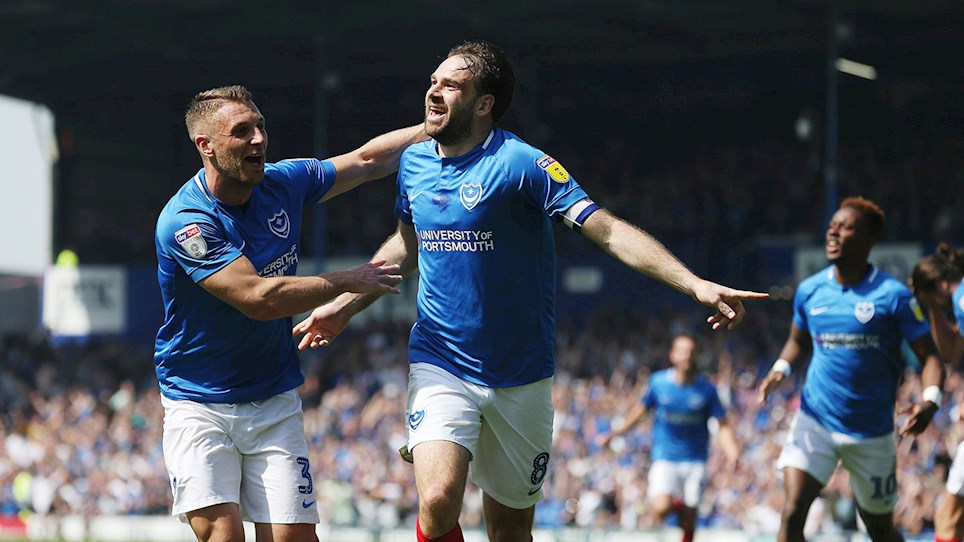 
If the ball is going to land at anyone’s feet inside the penalty area, then you want it to be Brett Pitman. 
Pompey can look back on a fruitful Easter after twice scoring late winners to keep their promotion hopes alive.

Pompey scored a late winner for the second time over the Easter weekend to beat Coventry and maintain their automatic promotion hopes.

They were poor in an open first half at Fratton Park and Jordy Hiwula’s goal meant that the visitors went in ahead at the break.

It was a much improved display following the restart, however, and Tom Naylor headed the Blues back on level terms.

They did not quite leave it until stoppage-time on this occasion, but time was still running out when Brett Pitman fired home the winner.

Kenny Jackett stuck with the same side that secured a dramatic triumph at Burton on Good Friday.

Former Pompey defenders Tom Davies and Dominic Hyam started for the visitors, although Conor Chaplin had to be content with a place on the bench.

The sun was shining and the atmosphere was rocking as the sides emerged from the tunnel ahead of kick-off.

An early sliding challenge from Pitman to dispossess Bright Enobakhare showed that the skipper meant business.

And the hosts almost broke the deadlock on seven minutes when Lee Burge made a hash of dealing with Lee Brown’s corner.

The keeper almost managed to punch the ball into his own net, only for a well-placed Davies to clear from the line.

Instead it was Coventry who broke the deadlock moments later, as Enobakhare found space to charge through the centre.

He played the ball through to Hiwula in the box, with the winger spinning and finding the net with a neat finish.

It was proving to be a fairly open contest, with both sides looking shaky in defence and capable of adding to the scoring.

Burge failed to deal with another corner and when Matt Clarke hooked it back into the mixer, Jamal Lowe’s fierce effort was blocked.

Coventry then broke straight up the other end of the pitch and looked like they would double their lead.

Craig MacGillivray came out of his area and was beaten to the ball by Luke Thomas, but Nathan Thompson got back on the line to make a vital block.

Davies then proved a hindrance to his former club once again, making a key challenge to deny Lowe when Pitman flicked on a long MacGillivray pass.

A couple of Jordan Shipley corners caused problems for the Blues, while Naylor headed a decent chance over after Pitman’s effort had been deflected behind.

Enobakhare then ran along the byline and tried to cut the ball back, but Christian Burgess was able to clear it behind.

Jackett made a double switch at the break, with Oli Hawkins and Gareth Evans making way for James Vaughan and Ronan Curtis.

The latter immediately won a corner that he took himself, but a dangerous delivery was headed clear.

He then took a free-kick after Lowe had been brought down by Dujon Sterling, with Burge doing well to punch the ball to safety.

There was a break in play following a clash of heads between Vaughan and Liam Kelly, although both were fine to continue.

And Pompey came close to levelling when the action restarted, as Brown collected Lowe’s cross and drilled a shot narrowly wide.

Burge took an over the resulting goal-kick, with referee Darren Drysdale eventually losing patience and brandishing a yellow card.

The hosts were controlling the play, but finding the Coventry defence in stubborn mood as they looked to protect their lead.

One patient attacking move ended with a cross from Lowe that was just too high for a stretching Vaughan.

But the Blues were level on 66 minutes, as Brown whipped in a corner from the right that was converted by NAYLOR’s bullet header.

Pompey looked to increase the pressure and Vaughan stole possession, only to see his pass for Pitman intercepted.

Curtis then sent a ball into the mixer that somehow managed to evade everyone on its path out of play.

But the visitors soon had a chance to score on the break, with Enobakhare slipping a pass through to the onrushing Thomas, who could only send his shot into the side netting.

And there was soon the unnerving sight of seeing Chaplin enter the pitch in opposition colours, as the former Fratton favourite was brought on.

It was Pompey who were next to go close, however, as Lowe collected a pass from Naylor and curled the ball narrowly past the post.

Shipley then lined up a dangerous looking free-kick at the other end, although Hyam could only head straight into MacGillivray’s arms.

But it was the Blues who forged on 83 minutes – and Fratton Park erupted as the ball hit the back of the net.

A corner from Brown was sent back into the danger zone by Curtis and when it landed for PITMAN, the skipper lashed home a fierce finish.

Coventry won a corner that was nervously scrambled clear and the display of six additional minutes caused the tension to grow.

But the hosts saw out the closing stages with relative ease to stretch their winning run in the league to seven matches.


View the photos from the latest Blues victory


If the ball is going to land at anyone’s feet inside the penalty area, then you want it to be Brett Pitman.


Pompey can look back on a fruitful Easter after twice scoring late winners to keep their promotion hopes alive.

Tickets have sold out for Pompey’s clash with Coventry at Fratton Park on Easter Monday.

There were a few seats remaining in the Milton End over the weekend, but these were snapped up on the morning of the game.

Due to the match being televised live on Sky Sports, there will be fewer than 100 car parking spaces available for fans behind the North Stand.

The Victory Lounge is open to supporters from 10.30am on Monday. 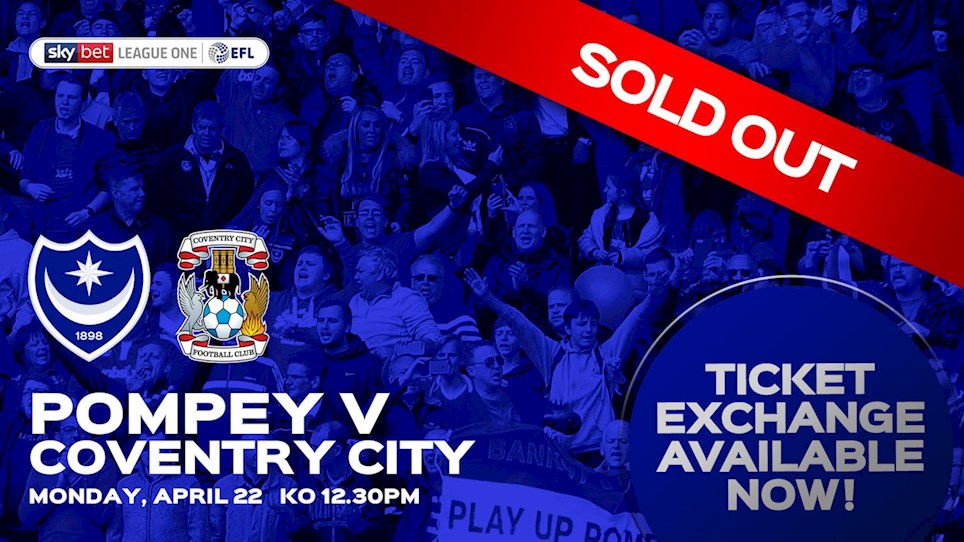 
Fratton Park is now full to capacity in the home sections for the League One clash with Coventry on Easter Monday.