Pompey will aim to take the race for automatic promotion to the final day by beating Peterborough this evening.

Kenny Jackett’s side know they have to win their final two matches and hope that either Barnsley or Luton drop points on Saturday.

It is so tight at the top of the League One standings, that the Blues could still finish in any position in the top five.

But tonight’s opponents are certainly not going to roll over, as they also want to keep their hopes of Championship football alive.

Posh need a maximum haul from their last couple of fixtures if they are to have any chance of overhauling Doncaster to claim a play-off spot.

But Darren Ferguson’s troops are without a win from their past three games and were beaten 3-0 at struggling Walsall a few days ago.

Steve Evans was in charge for the first half of the campaign and he was dismissed in January, despite the team sitting sixth at the time.

United certainly have plenty of attacking firepower, with Matt Godden and Ivan Toney both into double figures for league goals and Marcus Maddison topping the division’s assists table.

Both sides were unbeaten when they met at London Road back in September, but goals from Oli Hawkins and Jamal Lowe meant it was Pompey who emerged 2-1 victors.

Meanwhile, a late strike from David Wheeler saw the Blues progress in the quarter-finals of the Checkatrade Trophy in January.

TEAM NEWS
Omar Bogle has returned to training sooner than expected following a knee and ankle problem and could feature, while Jack Whatmough (knee) is still sidelined.

Peterborough have doubts over George Cooper (ankle) and Ryan Tafazolli (knee), with neither expected to be available.

VIEW FROM THE DRESSING ROOM
Read the thoughts of Kenny Jackett and Lee Brown or register for a free iFollow account to watch the below video.

TICKETS
Pompey have sold out of tickets in the home sections of the stadium.

BETTING
Pompey are the 8/15 favourites with Sky Bet to secure all three points, while the visitors can be backed at 17/4. 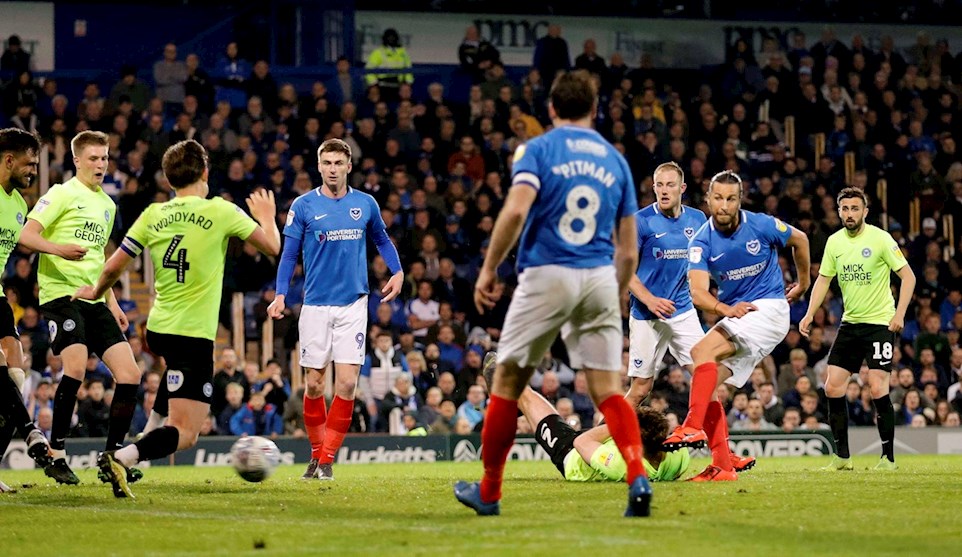 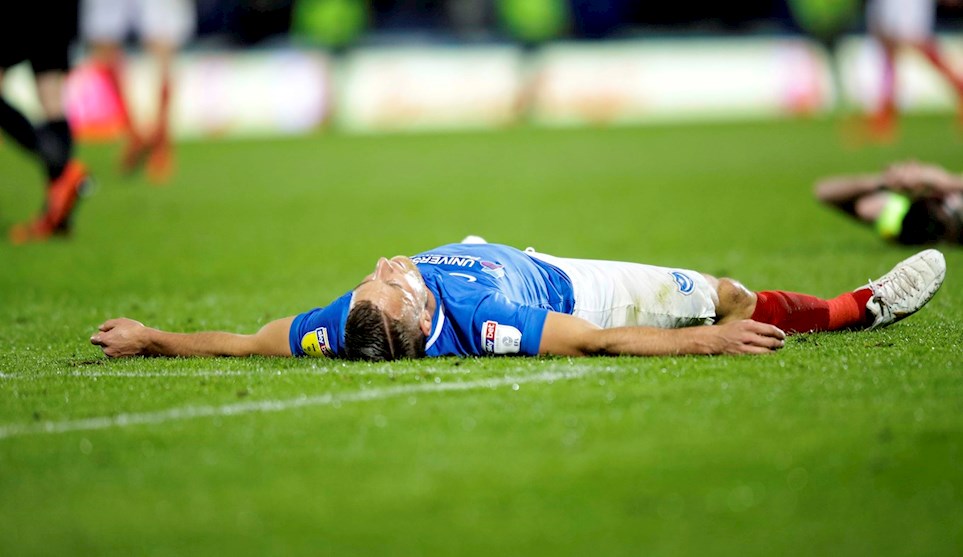 
View the photos from a disappointing night at Fratton Park

Close: It Wasn't To Be


Ben Close believes it is important for Pompey to finish the regular season on a high. Jackett: Get Over It


There was a feeling of what might have been as the final whistle blew on Pompey’s automatic promotion hopes.

Pompey’s automatic promotion hopes are over after they suffered defeat to Peterborough in an eventful contest at Fratton Park.

They dominated for much of the evening, but Lee Tomlin and Ivan Toney both struck to give the visitors a commanding lead.

Ben Close pulled one back before the break and a grandstand finish looked on the cards when Christian Burgess levelled.

Substitute Viv Solomon-Otabor then had a goal disallowed and Posh took advantage, with Toney netting again to condemn the Blues to the play-offs.

Kenny Jackett stuck with the same side that drew at Sunderland on Saturday, with James Vaughan continuing to lead the line.

Pompey came roaring out of the blocks and set about attacking a Peterborough side who got plenty of players behind the ball.

Brett Pitman diverted a Lee Brown delivery wide in the opening stages, while an effort from Ronan Curtis was blocked by Toney.

A quick break then saw another Brown cross nodded down by Vaughan, but Curtis’ shot struck team-mate Jamal Lowe.

It was pretty much one-way traffic and the hosts were only missing that clinical edge, with Nathan Thompson’s drive lacking enough power to trouble Aaron Chapman.

But the Fratton faithful were left stunned when Peterborough went ahead on 13 minutes, as Marcus Maddison cut the ball back for Tomlin to rifle home.

It looked as though Vaughan would level after more good work down the right from Lowe, only for a brilliant sliding challenge by Ben White to deny the striker his first goal for the club.

Instead it was Posh who were next to score when Maddison whipped a corner into the box and Toney was left in space to nod into the net.

Tomlin was not endearing himself to the home supporters and got away with kicking the ball away from a Blues free-kick.

But referee Dean Whitestone’s patience finally run out following another bout of time-wasting from the forward and brandished a yellow card.

Naylor fired over after Pitman brought down Matt Clarke’s cross, as Pompey tried to get back into the contest.

And they had a lifeline on 38 minutes, although it took an extremely scrappy goal to reduce the deficit.

Pitman swiped at a delivery from Curtis and completely mis-kicked the ball, but it landed for CLOSE to drive into the net via a deflection off White.

A quick break then almost provided a leveller in stoppage-time and after Lowe released Curtis, his low drive was saved by the foot of Chapman.

There was a change at the break, with Vaughan failing to return and Oli Hawkins taking his place up front.

Curtis was first to try his luck with a free-kick from 30 yards that struck the wall and was deflected behind.

That was the last bit of action for the Irish winger, however, who was immediately replaced by Solomon-Otabor.

It was a similar to the first half, with Pompey looking to get at their opponents whenever possible and Hawkins nodded over from a corner.

Pitman then cut the ball back into the centre, where first Close and then Lowe saw efforts blocked in quick succession.

There was a spot of handbags following the award of a Blues free-kick, with both Maddison and Brown seeing yellow.

But the equaliser arrived seconds later, as Brown whipped the set-piece right into the mixer for Hawkins.

The tall striker was unable to get a shot away, but instead laid the ball off for BURGESS to drive into the net.

And there was almost another goal for the hosts soon after, with a dipping half-volley from Close narrowly clearing the crossbar.

Peterborough also needed to win, however, and when Craig MacGillivray could not hold Maddison’s drilled free-kick, Clarke had to hack clear.

But it was Pompey providing more of a threat, as the lively Solomon-Otabor cut in from the left and drilled narrowly past the post.

They almost came undone when nobody picked up Ryan Tafazolli from a Maddison free-kick and his thumping header bounced back off the bar.

What followed was an incredible couple of minutes that saw the hosts have a goal disallowed before falling behind again.

Pitman raced onto a Thompson pass and was sent through on goal, but rather than shoot he elected to slide the ball across to Solomon-Otabor.

The loanee had the simple task of sliding into an empty net, although he was in an offside position and the flag was raised.

As Fratton Park recovered from that blow, worse was to come, with Toney wriggling into space at the other end to fire Posh back in front.

Pompey tried their best to recover, but Peterborough saw out the closing stages and the hosts now have to prepare for the lottery of the play-offs.


View the photos from a disappointing night at Fratton Park

Close: It Wasn't To Be


Ben Close believes it is important for Pompey to finish the regular season on a high.

Jackett: Get Over It


There was a feeling of what might have been as the final whistle blew on Pompey’s automatic promotion hopes.