Pompey will try to maintain their late surge for an automatic promotion spot when they host Rochdale on Saturday.

Kenny Jackett’s troops are currently sitting in fourth position and are just three points behind Sunderland in second.

The sides both have a game in hand on Barnsley sandwiched between them and play each other later this month.

But the Blues also know that victory this weekend would mean they are guaranteed at least a place in the play-offs.

Their next opponents are also desperate for points, however, as they try to stave off the threat of relegation.

Dale climbed out of the bottom four with a narrow midweek success at Accrington, courtesy of a strike from Ollie Rathbone in the second half.

It means that the Spotland outfit have lost just once in six games – winning three of those – since Brian Barry-Murphy replaced Keith Hill as manager.

Pompey have already beaten Rochdale twice on the road this term, with a 3-1 league triumph followed by FA Cup progress in the second round.

They also came out on top in the most recent Fratton meeting, with Brett Pitman bagging a debut brace on the opening day of last season.

TEAM NEWS
Andy Cannon appeared for the reserves in a midweek win at Fulham, but is not yet ready for a return to first team action following a thigh injury

Dion Donohue (groin) and Viv Solomon-Otabor (calf) are close to full fitness and could feature in another friendly against Bournemouth next Tuesday.

Luke McGee (hand) is available for selection and Jack Whatmough (knee) is still sidelined, but there are no new worries.

Rekeil Pyke (hamstring) is out for the visitors, but Zach Clough could feature after shaking off an ankle problem.

TICKETS
There is limited seating available online here and fans can take advantage of cheaper prices when tickets are bought in advance.

Subject to availability, they will also be sold from the ticket offices in Anson Road and Frogmore Road from 9am on Saturday.


Pompey have certainly picked the right time to find some form. 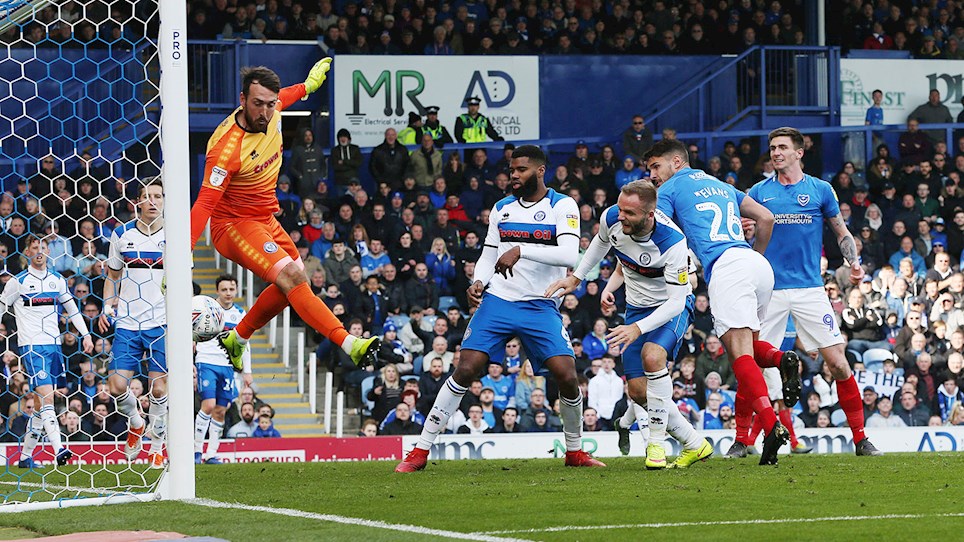 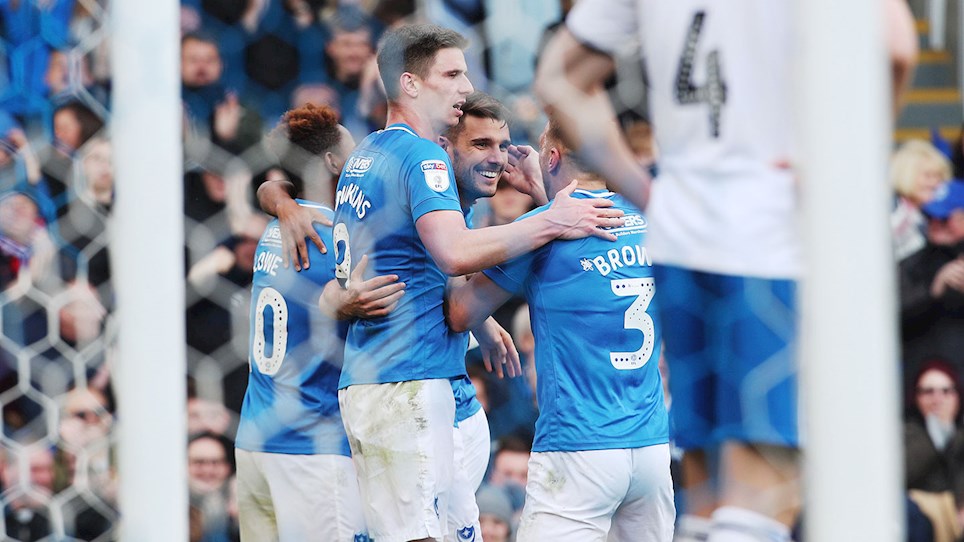 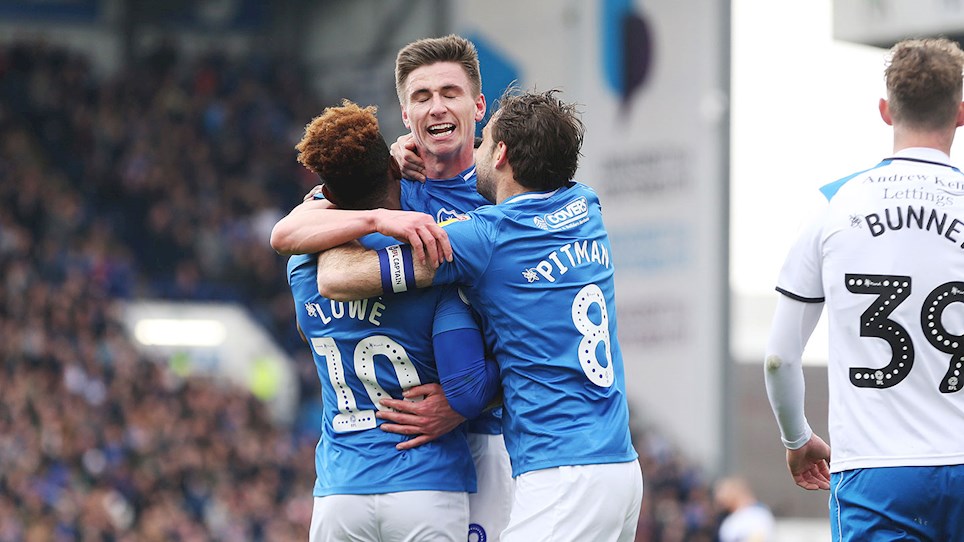 
It was Oli Hawkins who got the ball rolling in Pompey’s 4-1 victory over Rochdale at Fratton Park.

Pompey breathed new life into the League One promotion race with a convincing 4-1 victory over struggling Rochdale.

And with rivals Sunderland losing to Coventry in a nine-goal thriller, it means the sides – along with Barnsley – bunched even tighter in the table.

Oli Hawkins headed the opener at a packed Fratton Park, with Brett Pitman adding a penalty just before the break.

Aaron Wilbraham raised hopes of a Dale comeback early in the second half, but Evans came off the bench to calm fears before Jamal Lowe wrapped up a sixth successive win.

Kenny Jackett made one change from the side that won at Wycombe seven days earlier.

A fully-fit Ronan Curtis replaced Evans wide on the left, while Louis Dennis’ goal for the reserves earlier in the week saw him named among the substitutes.

The hosts started brightly in the spring sunshine and looked to get at their opponents right from the off.

Lowe was unable to force the ball home from a tight angle, while a cross from Curtis was just too high for Hawkins.

But as the sun went behind the clouds, Pompey also faded slightly and when Craig MacGillivray failed to hold a Callum Camps corner, Tom Naylor was forced to hack clear.

Matt Done then sent a dangerous delivery into the mixer, although a well-placed Ian Henderson headed it wide.

The Blues soon picked things up, however, and Hawkins should have done better than divert Lee Brown’s free-kick into the arms of a grateful Josh Lillis.

But HAWKINS did find the target midway through the first half, arriving at the near post to firmly head home Lowe’s cross.

Lowe might have doubled the advantage moments later, only for Lillis to come racing from his line to make the save.

Rochdale then had an opportunity of his own, when Wilbraham beat MacGillivray to a Christian Burgess pass, but could not beat the keeper.

It was the Blues looking the more likely to add to the scoring, though, and Hawkins nodded narrowly over after meeting Brown’s delivery.

He then saw another header saved by Lillis, while Ben Close had an attempt blocked as the hosts continued to apply pressure.

And it paid off just before the break when Nathan Thompson collected Lowe’s threaded pass and was crudely brought down in the box by Ethan Ebanks-Landell.

Referee Lee Swabey had no choice but to point to the spot and PITMAN calmly sent Lillis the wrong way to give Pompey a commanding interval lead.

The visitors looked brighter immediately following the restart, although Jim McNulty’s header was never going to prove much of a test for MacGillivray.

But Pompey were still looking dangerous going forward themselves and were causing plenty of problems for Dale to deal with.

One attack actually led to a goal for the opposition, however, with a quick break up the pitch ending with Done squaring for Wilbraham to slot into the net.

Pompey immediately looked to hit back and a long-range curling effort from Pitman was pushed behind by Lilllis.

The resulting corner almost provided a goal, with Burgess nodding it into the mixer and – in a sea of bodies – the ball eventually being hacked clear.

Jackett soon made a substitution, with Curtis – who had been quiet on the left – making way for Evans.

And it was EVANS who restored the two-goal lead just past the hour mark, nodding home from a few yards out after Lowe had lifted the ball into the centre.

Pompey were searching for a more convincing scoreline and a Brown cross was just out of reach for Lowe, while a rushed Hawkins effort was comfortable for Lillis.

They were starting to sit a bit too deep in the closing stages, though, and Jackett tried to add fresh impetus by replacing Hawkins with Omar Bogle.

But it was a Rochdale sub who had a chance to score moments later, although Bradden Inman slipped as he got his shot away and MacGillivray saved low to his left.

And Pompey immediately wrapped things up at the other end, as LOWE collected Matt Clarke’s long pass, held off one challenge and got past Lillis before firing the ball into the net.

Jackett’s final change saw Bryn Morris come on for Pitman, although it was fellow substitute Bogle whose effort had to be clawed away by Lillis.

Brown should have given the scoreline an added gloss late on, but glanced Lowe’s delivery wide with the goal gaping.

It mattered not, however, as Pompey had comfortably done enough to extend their winning run and move to within two points of second place.


Pompey have certainly picked the right time to find some form.


It was Oli Hawkins who got the ball rolling in Pompey’s 4-1 victory over Rochdale at Fratton Park.