The Wembley celebrations are starting to die down and Pompey’s focus must return to the bread and butter of league football.

Barnsley and Sunderland are currently in pole position to claim the second automatic promotion spot behind leaders Luton.

But the Blues know that they must continue to pick up points in case those sides slip up in the final few weeks of the season.

Next up is the relatively short trip to face a Wycombe side also desperate for wins, albeit for different reasons.

Gareth Ainsworth’s troops are currently sitting in 17th position and just a couple of points above the drop zone.

And with no side in the bottom half of League One safe from the drop, Wanderers will want to claw themselves up the table.

The Chairboys have not tasted victory in any of their past 10 fixtures and have lost three on the bounce.

You have to go all the way back to January 26 to find the last time they emerged triumphant, with just three draws to show for their efforts since.

Gareth Evans and Brett Pitman were on target in a 2-2 draw when the sides met at Fratton Park earlier in the season.

TEAM NEWS
Bryn Morris is available again for Pompey following a knee problem. He spent the first half of the campaign on loan at Wycombe and scored against the Blues back in September.

But the visitors will be without Andy Cannon (thigh), Dion Donohue (groin), Luke McGee (hand) and Viv Solomon-Otabor (calf).

Nathan Tyson returns from a three-match ban for Wycombe, but Darius Charles (knee) is a long-term absentee.

VIEW FROM THE DRESSING ROOM
Read the thoughts of Kenny Jackett and Christian Burgess or register for a free iFollow account to watch the below videos.

TICKETS
Pompey have sold their full allocation of tickets for this match and no more will be available to buy on the day of the game.

BETTING
Pompey are the 21/20 favourites with Sky Bet to secure all three points, while the hosts can be backed at 5/2. 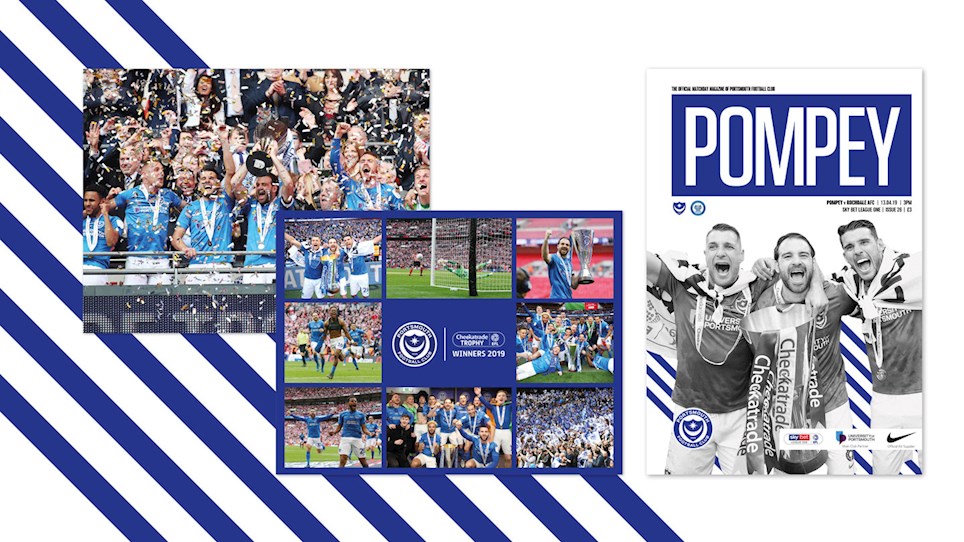 
It was a day to remember for more than 40,000 Pompey fans crammed into Wembley. 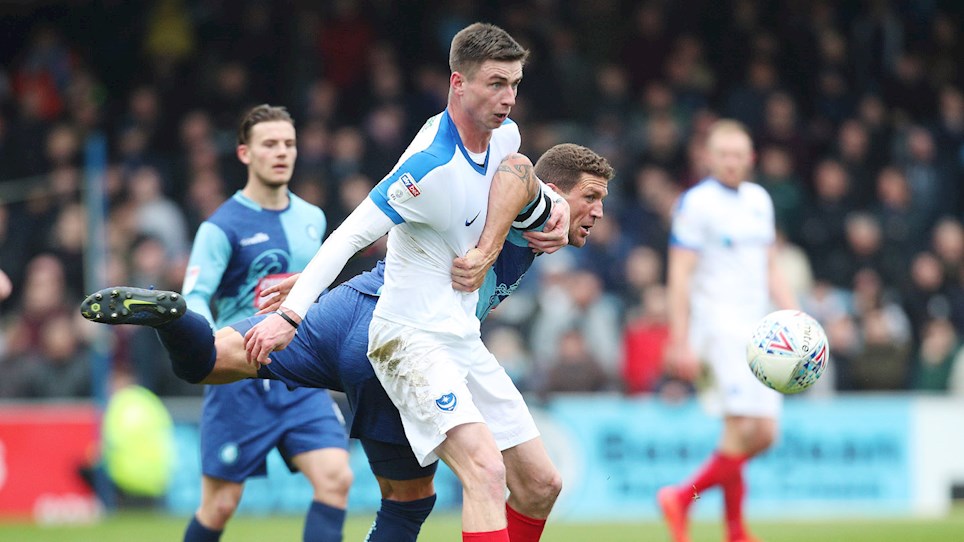 
Oli Hawkins insists that Pompey are still confident of securing second spot in League One. 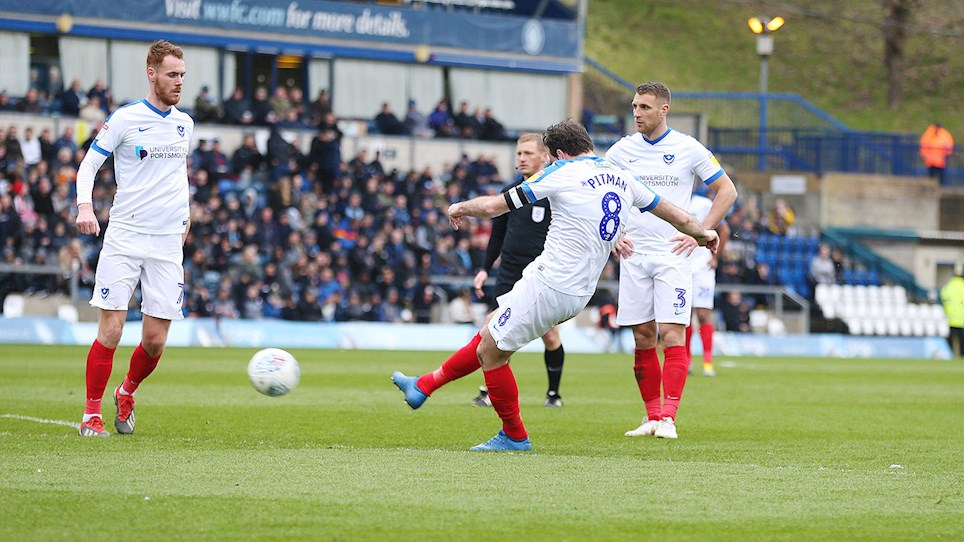 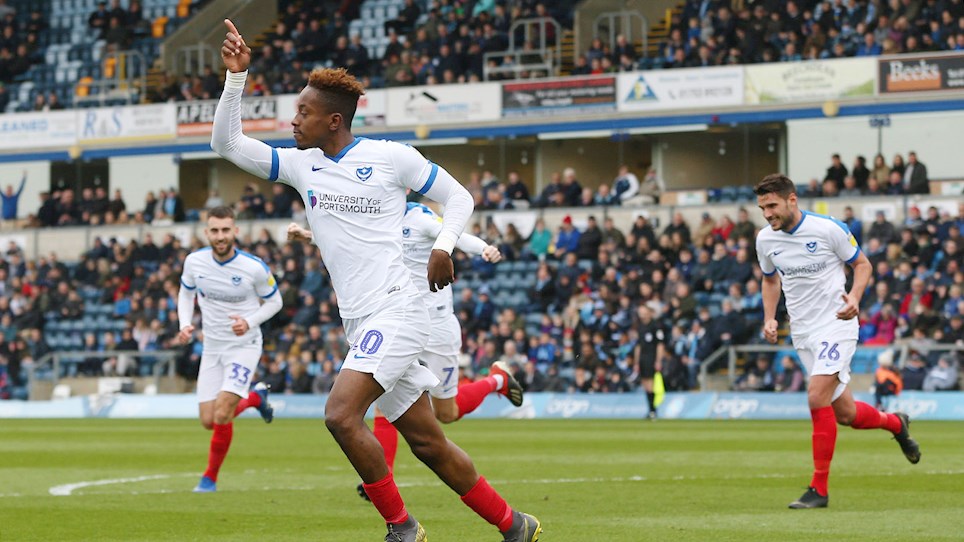 
View the gallery from the Blues' latest triumph

There was no Wembley hangover for Pompey, as they kept themselves in the automatic promotion hunt with victory at Wycombe.

They dominated most of the contest, with Jamal Lowe’s early finish added to by a Brett Pitman goal just after the interval.

Marcus Bean controversially reduced the deficit for the Chairboys, only for a fine free-kick from Pitman to restore the Blues’ commanding advantage.

A super strike from Scott Kashket ensured a nervy end to proceedings, but the visitors held on to secure the points.

Kenny Jackett made two changes from the side that beat Sunderland to lift the Checkatrade Trophy the previous week.

Oli Hawkins – who had struck the winning penalty in the shoot-out – was rewarded with a start, with Gareth Evans also returning, as Omar Bogle and Ronan Curtis dropped to the bench.

There were plenty of familiar faces in the opposition line-up, with Blues academy graduate Paris Cowan-Hall joining former Fratton loanees Ryan Allsop and Bean in the Wanderers team.

Pompey came racing out of the traps and won a series of early corners that kept the home defence on their toes.

The visitors were enjoying plenty of possession and territorial advantage, without being able to test Allsop between the sticks.

Pitman did well to race past Dominic Gape down the right and square for Lowe, who spun sharply and curled a shot over.

Another neat move saw Hawkins find Lowe with a cross-field pass and the winger laid the ball off for Pitman to fire just off target.

Allsop was then called into action for the first time, although was not overly troubled by a drilled effort from Lee Brown.

He could do nothing to stop Pompey from taking the lead on 18 minutes, however, as they finally made their pressure count.

A free-kick from Evans was not properly dealt with and when Matt Clarke lifted the ball back into the box, LOWE was there to drill it through a sea of bodies and into the net.

They did not sit back on their lead, though, and a shot from Ben Close was blocked after Tom Naylor had stolen possession.

Wycombe had offered little at the other end of the pitch, but had two great chances to level before the break.

The first opportunity came from a 25-yard free-kick after Alex Samuel had been fouled by Christian Burgess and Craig MacGillivray flung himself to the left to push behind Jason McCarthy’s attempt.

And the keeper made another fine save moments later, this time to keep out a fierce strike from Cowan-Hall.

But Pompey might have extended their advantage in stoppage-time, as Clarke teed-up Lowe for a curling shot that was well saved by Allsop.

A second goal did arrive just 27 seconds after the restart, however, as Evans played a dangerous ball down the middle.

Anthony Stewart looked like he would deal with it, but PITMAN nipped in to steal the ball and confidently slot it home.

Rather then dent Wycombe’s confidence, though, it seemed to spark them into life and the hosts suddenly enjoyed a spell of pressure.

And they made the most of it by reducing the deficit through Bean’s close-range finish, although referee John Busby had a lengthy discussion with his assistant before allowing the goal to stand.

The Blues were adamant that the midfielder had been in an offside position, although the official seemed to think the ball had come off a white-shirted player.

It had been a frantic start to the second period and Pompey had a chance to restore their two-goal advantage when Evans was brought down by Stewart just outside the box.

PITMAN stepped up to take the free-kick and curled a fine effort past Allsop’s desperate grasp to spark more scenes of joy in the packed away end.

Both teams were looking capable of adding to the scoring as the action continued to switch from one end to the other.

Pitman’s pass was cleared before it could reach Clarke at the near post, while substitute Adebayo Akinfenwa headed over.

But it took another fine save from MacGillivray to deny the Chairboys on 72 minutes, with the keeper getting down to push clear Samuel’s shot.

Pitman received a standing ovation as he made way off the pitch, with Anton Walkes coming on for the closing stages.

It was the hosts cheering soon after, though, as Kashket reduced their deficit with a screaming shot from just inside that area that flew into the top corner.

Curtis then replaced Evans, as Jackett looked for his side to get back on track, although the Chairboys came close to a leveller when Samuel’s header flashed past the post.

Wycombe were given renewed hope when the fourth official displayed six minutes of time to be added on.

The hosts continued to try to pump the ball into the Blues box, but the visitors held firm to close the gap on second-placed Barnsley.


It was a day to remember for more than 40,000 Pompey fans crammed into Wembley.


Oli Hawkins insists that Pompey are still confident of securing second spot in League One.


View the gallery from the Blues' latest triumph

Pompey have sold their full allocation of tickets for Saturday's visit to Wycombe.

It means that Kenny Jackett's side will be backed by around 1,800 fans for the League One contest at Adams Park.

Meanwhile, there are only a limited number of spaces remaining for the Good Friday visit to Burton, which kicks-off at 3pm and is being televised live on Sky Sports.

Click here for a list of tickets prices for the Brewers match and more information about how to purchase away tickets. 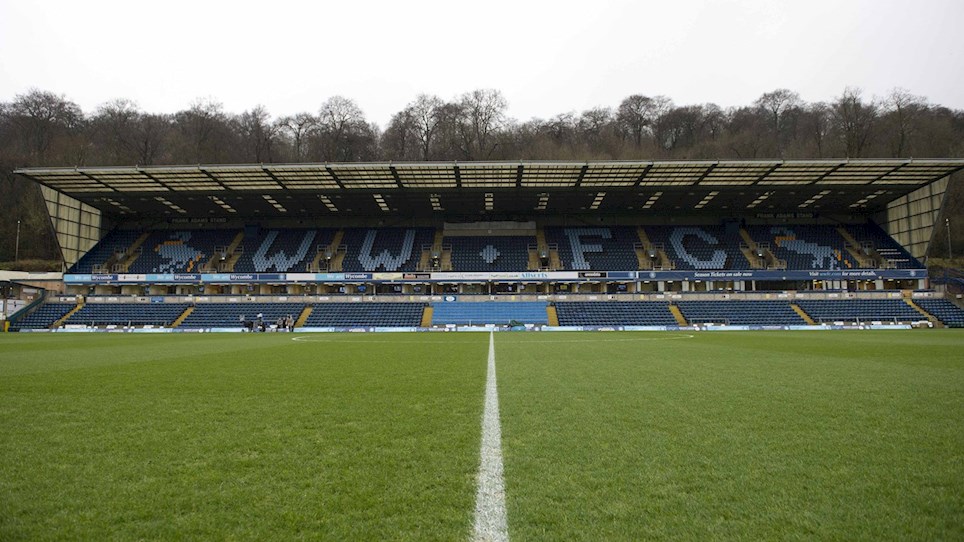 
Tickets for Pompey’s visit to Wycombe go on sale next week.