Pompey will aim to continue their 100 per cent start to the League One campaign at Bristol Rovers this evening.

A 4-1 victory over Oxford at the weekend means the Blues, Peterborough and Leeds are the only EFL sides yet to drop a point.

Their opponents, meanwhile, lost to the Posh on the opening day and were then beaten at home by Accrington the following week.

They recovered to see off Crawley in the Carabao Cup and then got their first points on the board by winning at Wycombe three days ago.

It leaves Darrell Clarke’s side sitting 16th in the League One standings, as they look to improve on last term’s 13th-placed finish.

Rovers are now in their third season at this level, having dramatically snatched automatic promotion from Accrington’s grasp on the final day of the 2015/16 season.

Pompey looked to be heading for victory when they last visited the Memorial Stadium back on New Year’s Day.

Oli Hawkins had given them a second half lead, only for late goals from Stuart Sinclair and Liam Sercombe to turn the match on its head.

It had been a more straightforward affair at Fratton Park earlier in the campaign, with Hawkins and Brett Pitman (2) on target in a 3-0 victory.

TEAM NEWS
Dion Donohue misses out as he continues his recovery from a groin problem, but Nathan Thompson should be available for selection following a knee injury.

Joe Partington and Stuart Sinclair are both sidelined for the hosts, who could hand appearances to former Pompey players Kyle Bennett and Tareiq Holmes-Dennis.

TICKETS
Pompey have sold their full allocation of tickets and no more will be available at the ground this evening.

MATCH COVERAGE
Supporters in the UK and Ireland can watch the game live – with commentary and graphics – as part of a new service offered by the EFL. It is priced £10 for a match pass and more information can be found here.

Domestic subscribers will, as usual, be able to listen to listen to live commentary from Andy Moon and Guy Whittingham by signing into their account and visiting the match centre from 7pm. Please note that you will still need to purchase a match pass in order to watch the game live.

BETTING
Pompey are the 8/5 favourites with Sky Bet to collect all three points, while the hosts can be backed at 17/10. 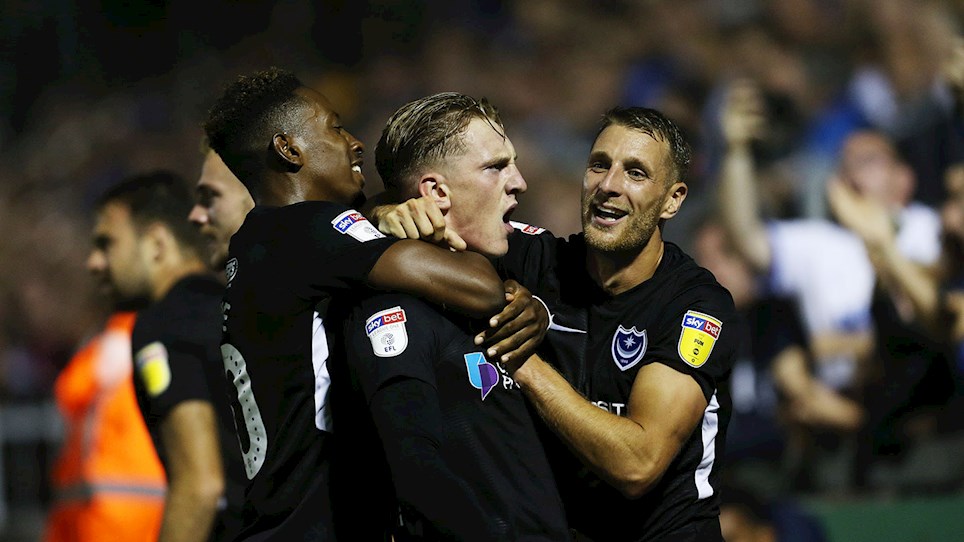 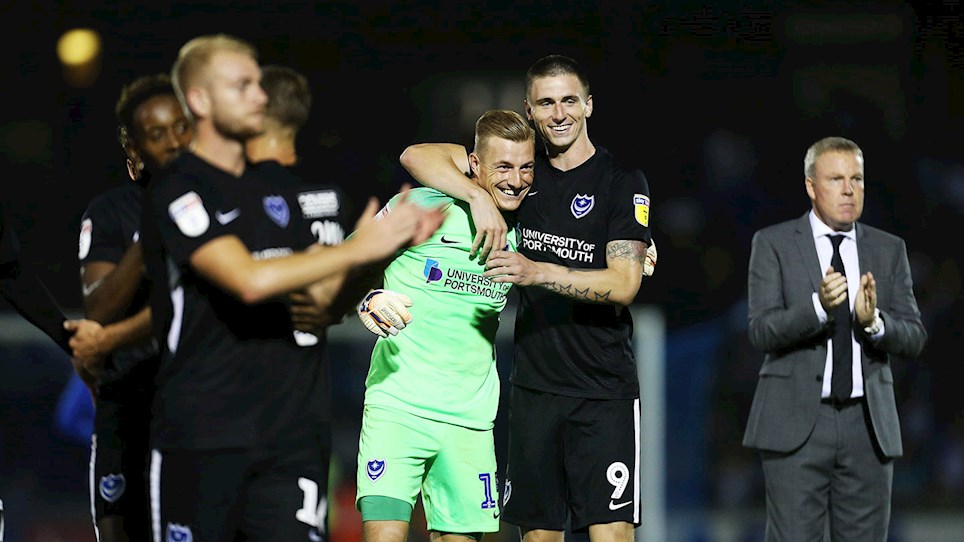 
The past few days have seen Pompey win two games in contrasting styles. 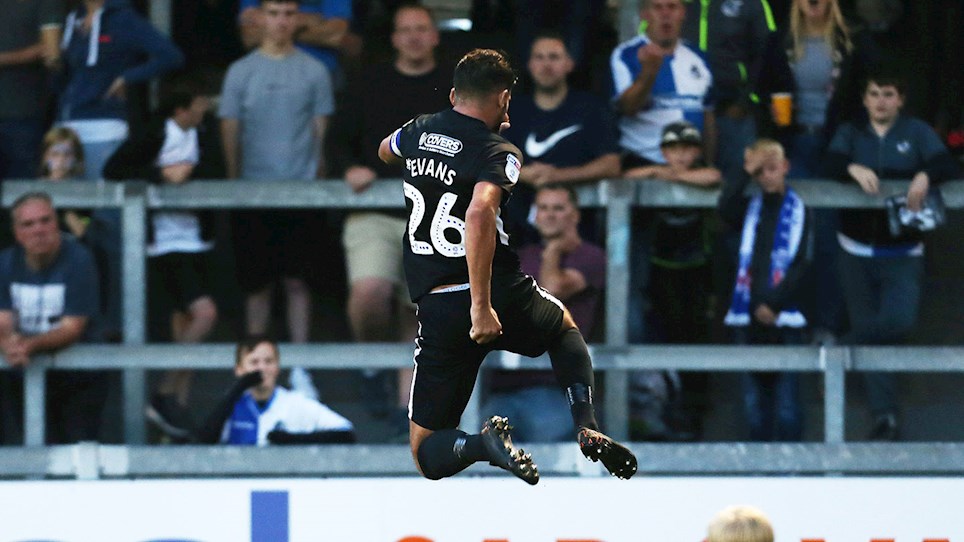 
View photos from the Blues' latest League One triumph 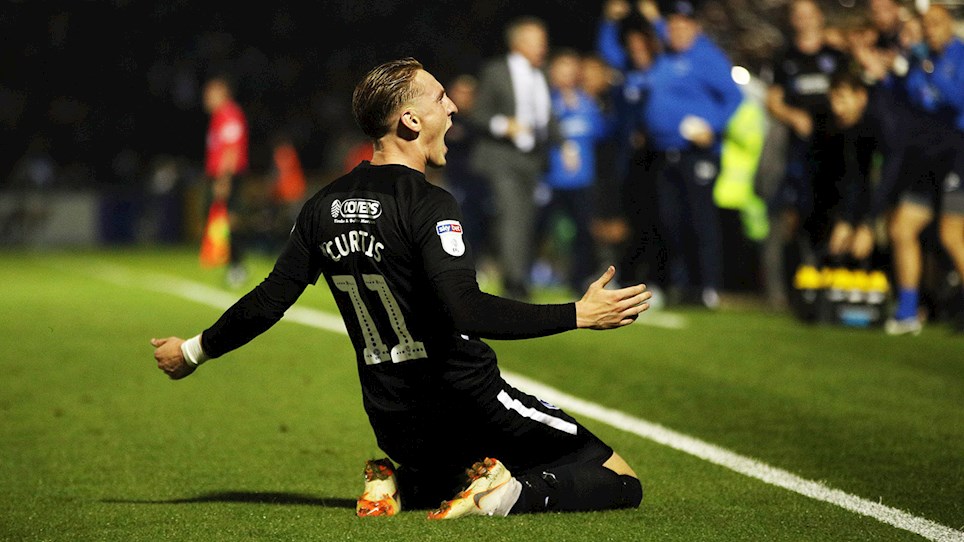 Curtis: I Lost The Plot


It would have been fair to give Ronan Curtis time to adjust after moving to English football.

by Neil Weld at the Memorial Stadium

A late goal from Ronan Curtis ensured Pompey continued their impressive start to the season with victory over Bristol Rovers.

Gareth Evans netted for the second game in succession to give them an interval lead at the Memorial Stadium.

But Chris Lines then levelled from the penalty spot and was sent off in the space of three second half minutes.

It looked like the spoils would be shared, only for Curtis to scramble a shot home late on and secure another three-point haul for the Blues.

Kenny Jackett unsurprisingly stuck with the same side that beat Oxford in such impressive fashion at the weekend.

There was a familiar face in the opposition line-up, with Kyle Bennett starting against his former club.

The game began in a cagey fashion, as both sides were limited to long-range efforts that failed to find the target.

Tom Naylor, Ben Thompson and Evans had their radars off for the visitors, while it was Ed Upson and Bennett for Rovers.

But Liam Sercombe really should have done better when Bennett’s cross found him unmarked in the box and he screwed over the bar.

Matt Clarke then did well to hook the ball to safety and prevent Stefan Payne from getting a shot away.

Those opportunities came during a spell of pressure for the hosts, but instead it was the Blues that broke the deadlock on 32 minutes.

A long ball up the pitch was flicked on first by Oli Hawkins and then Curtis, with EVANS collecting it and lashing home a rocket of a shot.

Rovers came close to levelling before the break, with MacGillivray getting down to his right to push clear a low Sercombe drive.

Anton Walkes was also called into action to block efforts from Ollie Clarke and Upson, ensuring Pompey went in ahead at the break.

It was Pompey who threatened first following the interval, but when Jamal Lowe’s cross was headed clear, Naylor was unable to keep his shot down.

There was then a break in play while Clarke received treatment for a cut above his eye and the Blues defender returned to the pitch with a bandaged head.

Rovers then had a great chance to equalise when MacGillivray palmed clear a curler from Tom Nichols, but Sercombe could only send the loose ball into the side netting.

Rovers were on top and after having penalty appeals turned down when Sercombe’s shot hit Thompson, an effort from Nichols had to be blocked by Clarke.

Pompey saw that nervy period out, however, and began to look more of a threat at the other end of the pitch.

Evans came close to his second goal of the evening after a surging run across the edge of the box, but drilled narrowly wide with his left foot.

But then came a couple of moments of controversy, as Rovers sub Lines scored from the spot before being sent off.

It was his corner that referee Graham Salisbury decided Curtis had deliberately handled, with the midfielder just about squeezing his penalty past MacGillivray’s outstretched arm and into the bottom corner.

Brett Pitman was immediately introduced from the bench and was caught by the studs of Lines, whose reckless challenge earned him a red card.

It was a hectic ending, with goals looking likely to go in at either end of the pitch, perhaps thanks to some tiring limbs.

But it was the Blues celebrating on 87 minutes, when CURTIS capitalised on Pitman’s flick from a Thompson pass and just about managed to force a shot over the line.

The visitors were then indebted to MacGillivray, who made a stunning save to deny Bennett, while Pitman cleared off the line from the resulting corner.


The past few days have seen Pompey win two games in contrasting styles.


View photos from the Blues' latest League One triumph

Curtis: I Lost The Plot


It would have been fair to give Ronan Curtis time to adjust after moving to English football.

Tickets for Pompey’s away game at Bristol Rovers go on sale later this week.

Kenny Jackett’s side make the trip to the Memorial Stadium on Tuesday, August 21 (7.45pm kick-off).

Blues fans have been handed an allocation of just under 1,150 tickets for the League One contest, with the majority of these being terrace places.

Subject to availability, tickets will then be placed on general sale from 9am on Friday, August 10.

But supporters can also call 0345 646 1898 or make a trip to the new Anson Road ticket office, which is located next to the club store. Fans are able to park in the North Stand car park.

Wheelchar and ambulant spaces are priced £13 for adults, £11 for seniors and young persons, and £9 for juniors. They include a free carer if on the highest rate of DLA or PIP.