Pompey will look to equal a record when they travel to the Keepmoat Stadium to face Doncaster this weekend.

Only once before – going all the way back to 1899 – have the Blues started a regular league campaign with five successive victories.

That was under Frank Burrows in 1979/80 season, which ended up with them securing promotion from Division Four.

Now, following wins over Luton, Blackpool, Oxford and Bristol Rovers, Pompey have a chance to match the feat by beating Grant McCann's men.

Their opponents are currently in seventh position, having collected seven points from the opening four matches.

Successive triumphs over Southend and Wycombe were followed by defeat at Burton and a draw with Shrewsbury.

Carabao Cup progress away to Scunthorpe also means they have a second round clash with fellow third tier outfit Blackpool on Tuesday evening.

Pompey conceded twice in the opening five minutes to go down 2-1 at Doncaster last term, while the return fixture finished all square at 2-2.

TEAM NEWS
Pompey are almost at full strength, with Dion Donohue the only absentee having not quite fully recovered from a groin problem.

Doncaster have no injury concerns, with former Blues loanee John Marquis likely to be lead the line for the hosts.

VIEW FROM THE DRESSING ROOM
Read the thoughts of Joe Gallen and Anton Walkes or a register for a free iFollow account to watch the below videos.

TICKETS
Pompey fans can buy and collect tickets from the Club Doncaster Academy – next to the away end – on the day of the game.

Click here for a guide for visiting fans that has been produced by the home side.

MATCH COVERAGE
Domestic iFollow subscribers can listen to live commentary from Andy Moon and John Durnin by signing into their account and visiting the match centre from 2pm on Saturday.

BETTING
Doncaster are the narrow 6/4 favourites with Sky Bet to secure all three points, while Pompey can be backed at 9/5. 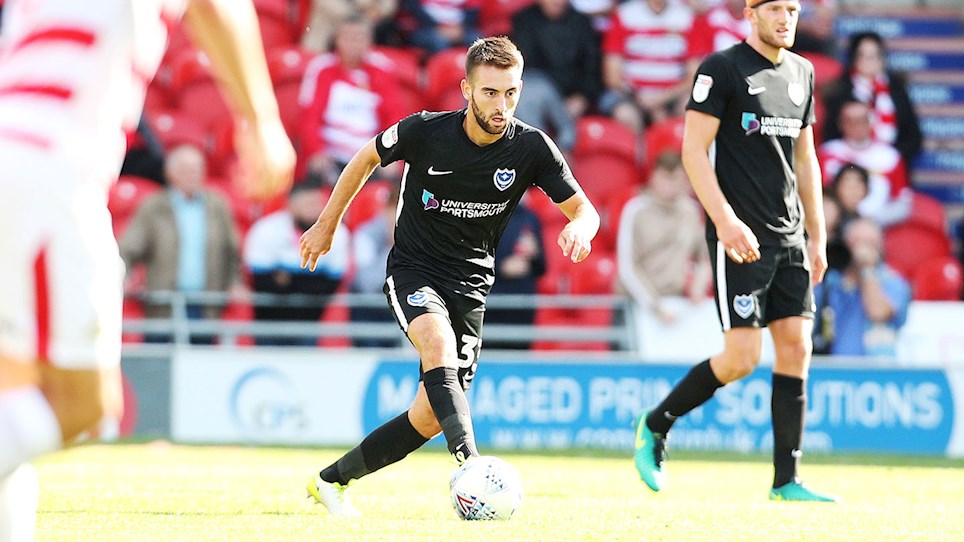 
Ben Close was called upon to add a calming presence to Pompey’s midfield against Doncaster. 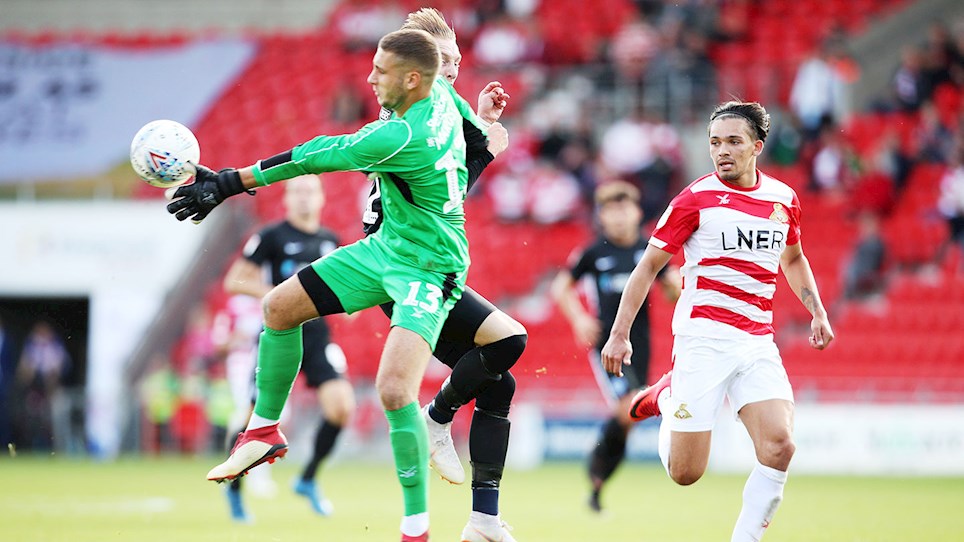 
View the photos from the Blues' draw at the Keepmoat Stadium.

Brown: A Good End To A Tough Week


Lee Brown was pleased to bring a busy week to an end with a point at Doncaster.

Pompey’s winning run came to an end at Doncaster, although they remain unbeaten following a goalless draw.

The visitors were well below-par before the break and survived some nervy moments, but were much improved in the second half.

Gareth Evans was twice denied by excellent Marko Marosi stops, but the keeper was sent off for a handball in the closing stages, meaning Rovers finished with an outfield player between the sticks.

Kenny Jackett named the same side for a third successive game, following victories over Oxford and Bristol Rovers.

But if the visitors were in a confident mood then it was not particularly evident during the opening 45 minutes.

There were plenty of nervy moments in the Blues back-line, with the ball spending much of the time in and around their area.

An early chance from Alfie May was comfortably dealt with by Craig MacGillivray and the chances kept coming for Doncaster.

They had a great opportunity to open the scoring moments later, with unmarked skipper Andy Butler heading Herbie Kane’s corner wide from just a few yards out.

Then, after Anton Walkes had been penalised for a foul on Matty Blair, the free-kick was curled narrowly over by Ben Whiteman.

It was a sloppy start from Pompey and when they failed to clear the danger on 12 minutes, MacGillivray was called into action again to deny May.

The hosts then thought they should have won a penalty, although replays showed Walkes was nowhere near May when he flung himself to the ground.

Not much was happening at the other end of the pitch, with Ronan Curtis and Ben Thompson both sending efforts well off target.

Meanwhile, a cross from Jamal Lowe had to be turned behind by Niall Mason before Evans could connect at the far post.

There was then almost a second own-goal in a week for Jack Whatmough, not that he knew much about it.

Kane’s shot struck the defender and wrong-footed MacGillivray, who managed to recover in time to stop the ball crossing the line.

Rovers continued to dominate as the interval neared and Mallik Wilks’ inventive overhead effort was kept out by MacGillivray, while Whiteman then blazed over.

Jackett made a double change at the break, with Thompson and Oli Hawkins withdrawn for Ben Close and Brett Pitman.

And they looked more assured once the action restarted, seeing much more of the ball without being able to test keeper Marosi.

Doncaster still posed a threat, however, and Lee Brown made a timely clearance to stop former Blues loanee John Marquis getting a shot away.

It was Pompey who almost broke the deadlock just before the hour mark, however, when Evans met a low Curtis cross and saw his shot kept out by Marosi at point-blank range.

The ball came loose and Evans picked it back up again, but could only find the side netting from a tight angle.

By now the action was switching from one end of the pitch to the other and MacGillivray got down to his right to save Blair’s strike.

Another excellent chance for the visitors followed and once more it was Evans who could count himself unlucky.

He lined up a shot after Pitman’s initial effort had been parried into his path, although Marosi again made a fine save to deny him.

But the ball fell straight back to Evans and although his second attempt beat the keeper, Whiteman was on hand to clear from the line.

The chances started to dry up as the game neared its conclusion, although both sides were still trying to attack.

Suddenly the drama picked up again, however, as Doncaster were reduced to 10 men on 83 minutes.

Marosi came tearing out of his box to beat Curtis to the ball and handled it, earning a red card from referee Andy Haines.

The hosts had made their final substitution moments earlier, meaning midfielder Whiteman had to don the keeper’s jersey.

But he was well protected by his defence in the closing stages, with a simple save from Curtis the closest Pompey came to snatching victory.


Ben Close was called upon to add a calming presence to Pompey’s midfield against Doncaster.


View the photos from the Blues' draw at the Keepmoat Stadium.

Brown: A Good End To A Tough Week


Lee Brown was pleased to bring a busy week to an end with a point at Doncaster.

Tickets are still available for Pompey’s League One visit to Doncaster this weekend.

Blues fans have already snapped up around 900 seats for the Keepmoat Stadium contest, which kicks-off at 3pm.

They remain on sale until 4pm today and can be bought online here, by calling 0345 646 1898 or in person from the new Anson Road ticket office.

But tickets can also be bought from the Club Doncaster Academy – located next to the away end – on the day of the game. That is also the location for supporters who are collecting tickets.

If you are expecting tickets in the post and they do not arrive, please contact the ticket office by 4pm today. We will not be able to help supporters who contact us on the morning of the game. 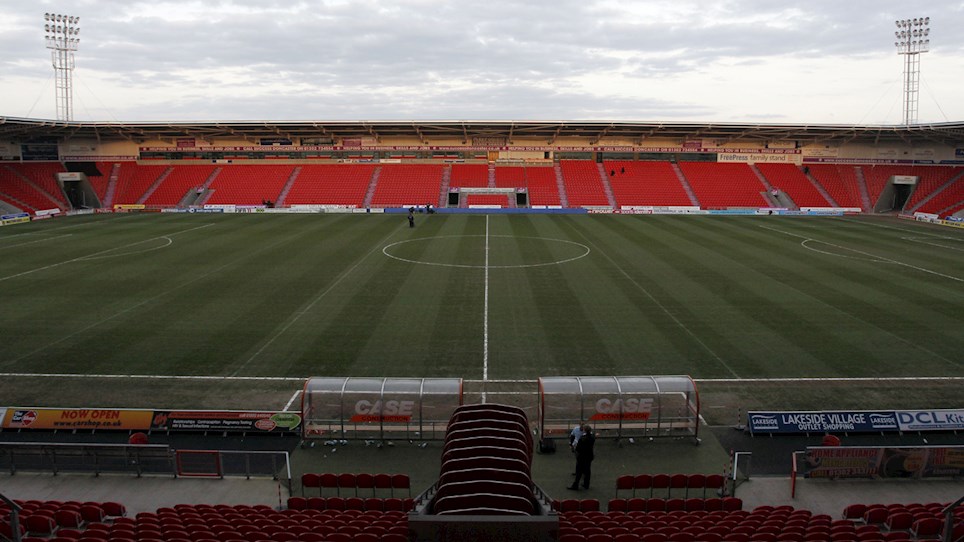 
Tickets for Pompey’s away game at Doncaster go on sale later this week.