The road to Wembley was ended – at least in the Carabao Cup – by AFC Wimbledon during the week.

But the Blues will look to put that behind them and continue their encouraging start to the 2018/19 League One campaign.

Kenny Jackett’s side will try to make it three successive victories by seeing off Oxford at Fratton Park this weekend.

It has been the reverse for their opponents, who recovered from back-to-back league defeats to beat Coventry in the cup.

Those losses against Barnsley (0-4) and Fleetwood (0-2) mean they currently prop up the division, albeit at a very early stage.

United are looking to improve on last season’s 16th-placed finish, with just a six-point buffer between them and the drop zone.

Karl Robinson has taken advantage of his first pre-season at the helm by making a host of signings, including the loan capture of ex-Pompey winger Ricky Holmes.

His maiden game as head coach was at Fratton Park back in March and it ended in defeat, courtesy of Kal Naismith’s goal and a Brett Pitman brace.

Former Blues keeper Simon Eastwood (finger) and Samir Carruthers (knee) miss out for the visitors, while Holmes (back) is also a doubt.

VIEW FROM THE DRESSING ROOM
Read the thoughts of Kenny Jackett and Matt Clarke and register for a free iFollow account to watch the below videos.

TICKETS
Seats can be secured online here or from the ticket office in Anson Road.

Subject to availability, they will be sold from both ticket offices from 9am on Saturday, while collections can be made from main reception.

BETTING
Pompey are the 17/20 favourites with Sky Bet to secure all three points, while the visitors can be backed at 10/3. 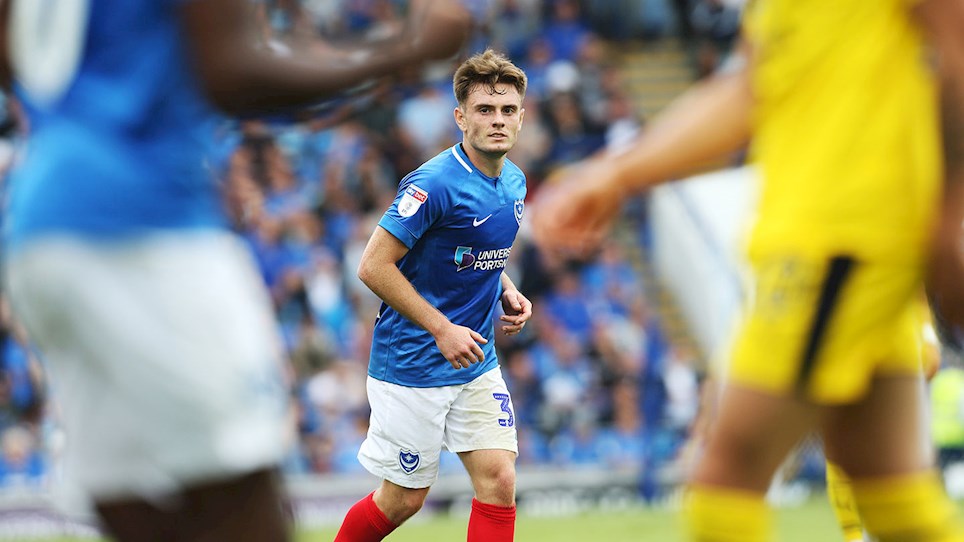 
It was the kind of all-action display he promised upon his arrival at Pompey from Millwall. 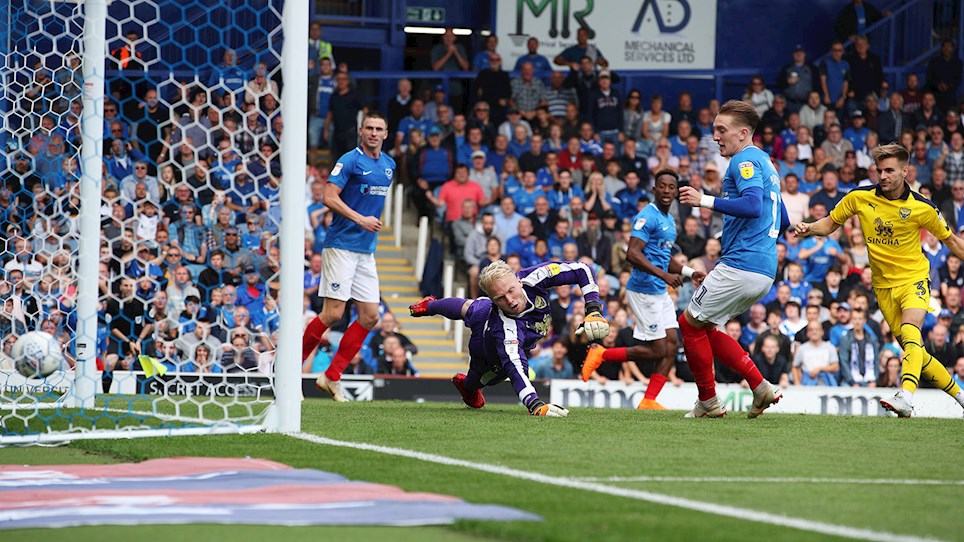 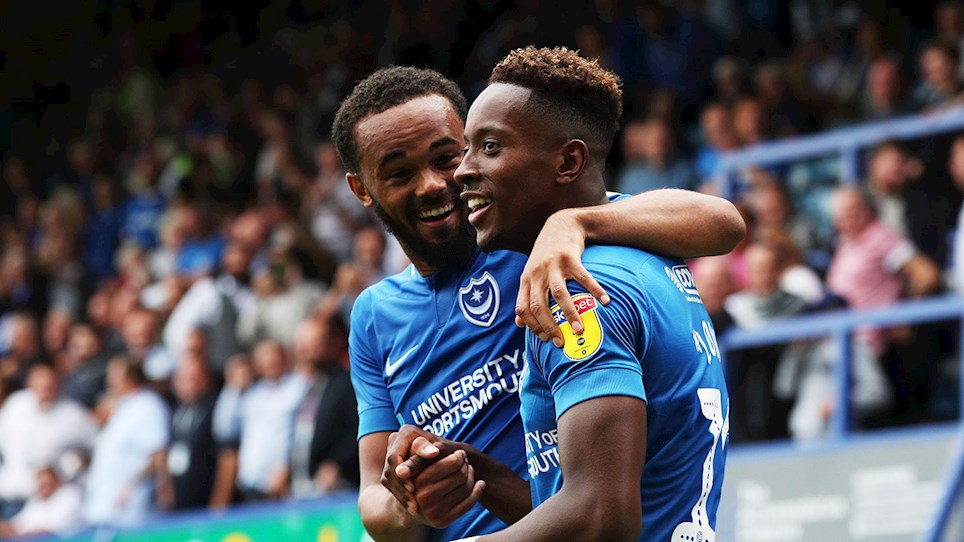 
Gareth Evans could have wilted under the disappointment of seeing his first half penalty saved.

Pompey continued their 100 per cent start to the league season with a convincing victory over Oxford at Fratton Park.

They dominated the contest, but it looked like a frustrating afternoon might be in store when Gareth Evans saw his penalty saved.

The Blues were more clinical after the interval, however, and Evans redeemed himself, while a Rob Dickie own-goal and Jamal Lowe effort gave the scoreline a more realistic gloss.

United staged a late rally and twice the struck the woodwork before Jack Whatmough found his own net.

But the visitors – who are without a league point – were unable to stage an unlikely comeback and Lowe wrapped things up impressively in stoppage-time.

Kenny Jackett made six changes from the side that exited the Carabao Cup on home soil earlier in the week.

Ben Thompson was handed an immediate debut in the centre of midfield, having finalised a loan switch from Millwall the previous day.

Luke McGee, Christian Burgess, Brandon Haunstrup, Ben Close, David Wheeler and Brett Pitman were the men to make way, with all of them dropping to the bench.

Pompey had not been overly convincing in their opening day home victory over Luton, but they completely controlled the first half against Oxford.

The contest was slow to get going, but it was the hosts who dominated in terms of both possession and chances.

Tony McMahon had to clear Tom Naylor’s header behind, while Curtis was unable to keep his effort down from a Lowe centre.

Hawkins was proving a constant nuisance, but could not find the target after Whatmough’s long clearance picked him out.

It was a lively display from Thompson in the centre of the pitch and he certainly endeared himself to the Fratton faithful with a crunching – yet fair – challenge on Marcus Browne.

And the host should have broken the deadlock when Hawkins stole possession from Jamie Hanson, only to then be scythed down by the Oxford midfielder.

The ball stayed in play, though, and when it was worked to Thompson outside the box, his drilled effort fizzed just past the post.

Pompey were totally on top and had another great opportunity, as Hawkins flicked on Thompson’s pass, but Naylor swiped at thin air from just a few yards out.

Evans had another chance after collecting the ball from Lowe, but could not force his shot through a sea of yellow-shirted bodies.

United were racking up the bookings, with Hanson, Cameron Brannagan and Shandon Baptiste all cautioned.

But there was a Fratton first when their coach Shaun Derry – formerly of the Blues – argued with the fourth official and – under new FA rules – was also shown a yellow card.

There was one more chance for the hosts just before the break, but Hawkins was unable to connect with Thompson’s low cross at the near post.

Pompey had not made the most of their dominance in the first half, but roared into the lead just after the interval.

Hawkins was unable to turn in Lowe’s delivery, but instead managed to lay the ball off for EVANS to steer home.

Naylor then clashed with Brannagan and both players required treatment, with the Blues midfielder returning to the pitch sporting a bandaged head.

It was still pretty much one-way traffic and the lead was deservedly doubled on 56 minutes – albeit in fortuitous circumstances.

Lowe caused more problems on the right and tried to pick out Evans in the box, only for DICKIE to get there first and turn the ball into his own net.

Oxford made a triple substitution just past the hour mark in a desperate attempt to find a route back into the contest.

Instead they found themselves further behind, as Pompey continued to torment their under-siege opponents.

A corner from Evans was helped on by Clarke and turned towards goal by Hawkins, with LOWE sticking out a boot to flick the ball past Mitchell.

The visitors finally came to life in the closing stages and Brannagan forced a decent save from MacGillivray.

Oxford then hit the post twice in quick succession, with James Henry and Jon Obika both denied in a lively conclusion.

Their hopes were raised when Whatmough inadvertently sliced McMahon’s cross into his own net, but that was as good as it got.

Instead it was Pompey who had the final say, as LOWE surged forward and curled home an exquisite finish to complete the rout.


It was the kind of all-action display he promised upon his arrival at Pompey from Millwall.


Gareth Evans could have wilted under the disappointment of seeing his first half penalty saved.