Pompey’s run of fiendish festive fixtures continues with a trip to face Barnsley in League One this weekend.

With snow forecast for the north of England on Saturday, the visitors will be hoping their promotion quest does not freeze at Oakwell.

Kenny Jackett’s men will be looking for a response to their midweek home defeat by Charlton – just the second league loss suffered so far this season.

Their latest opponents were – along with Sunderland – considered favourites to go up before a ball had been kicked in the summer.

Both teams were relegated at the end of the last season, with Barnsley’s fate sealed by a 4-1 reverse at Derby on the final day.

They are certainly still in the running to secure an instant return, although successive defeats have seen them slip to sixth.

Pompey fans will need to be wary of their hosts’ home form, as they are one of three clubs in the division yet to be beaten on their own turf.

The Blues were beaten 2-0 on their last trip to Oakwell in February 2012, although many will still remember the Robert Prosinecki-inspired 4-1 triumph there in 2001.

Ben Thompson is also allowed to feature after the club successfully appealed his red card for serious foul play against Charlton.

Barnsley are hoping that striker Cauley Woodrow will be fit enough to feature after injuring his calf at Wycombe last weekend.

Manager Kenny Jackett chats ahead of Pompey's away trip to Barnsley in Sky Bet League One.

The Pompey forward chats about his fantastic header against Southend, a frustrating night against Charlton, the upcoming game against Barnsley and more!

TICKETS
Fans can secure their seat online here or by visiting the Anson Road ticket office until 4pm today.

They can also be purchased from North Stand cash turnstiles at Oakwell on the day of the game, although there is a price increase. Click here for more details.

BETTING
Barnsley are the 5/4 favourites with Sky Bet to secure all three points, while the visitors can be backed at 2/1.

Oh, and not forgetting the usual wizardry from Prosinecki 💫#ThrowbackThursday #Pompey pic.twitter.com/3KLJx00bW4 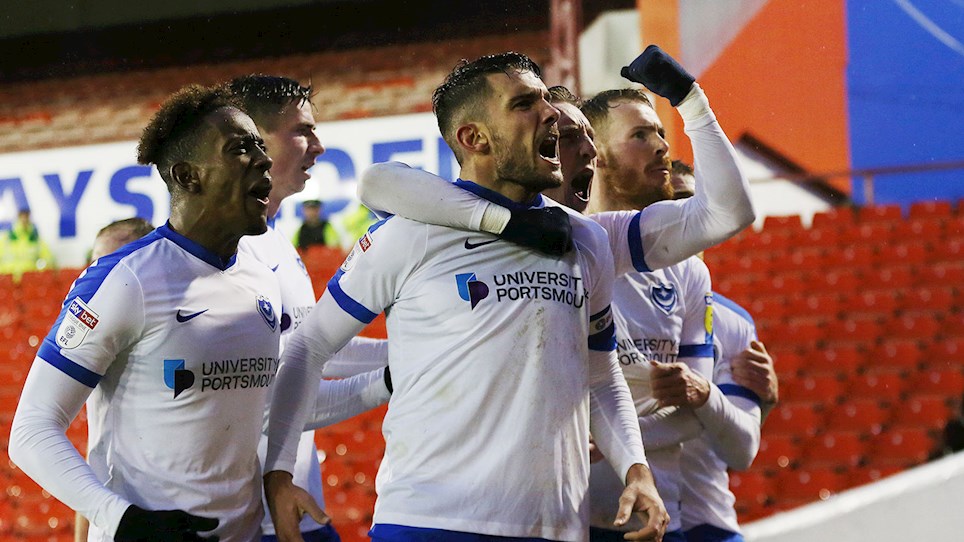 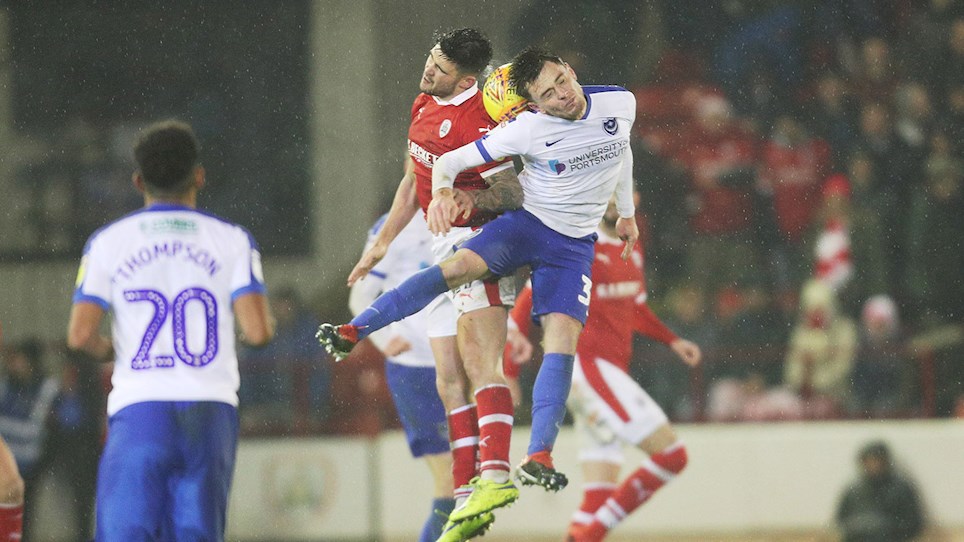 
View the photos from the Blues' draw at Oakwell

Evans: We Dealt With Conditions


Gareth Evans saw his northern credentials put firmly to the test at Oakwell. 
Barnsley had not lost on home soil, while Pompey were unbeaten on the road.

by Neil Weld at Oakwell

Pompey will definitely be top of the League One table at Christmas after securing a 1-1 draw against fellow promotion hopefuls Barnsley at Oakwell.

But they might have been celebrating an even greater haul, as Gareth Evans drilled them into the lead just before the break.

Amidst a freezing downpour, however, Cauley Woodrow levelled in the second half and the Blues were forced to hold on at the end.

A stalemate was probably not the biggest surprise, with the hosts boasting an unbeaten home league record and the visitors having not been beaten on the road.

Kenny Jackett stuck with the same side that were beaten by Charlton on home soil earlier in the week.

But with Luke McGee suffering from a hand injury, Alex Bass was recalled from a loan spell at Torquay to sit on the bench.

It was not exactly the right day for a neat, passing game of football, with freezing rain falling from the South Yorkshire sky throughout.

That did not seem to dampen the entertainment on offer, however, as the game was often played at a frantic pace.

It was the hosts who looked on top for much of the first half, although they were let down by some poor finishing.

Pompey actually had the first opening, but Ronan Curtis took a heavy touch from Jamal Lowe’s threaded pass, allowing Adam Davies to come from his line and claim.

Craig MacGillivray was the busier of the two keepers, however, and he had his palms stung by Woodrow.

Meanwhile, some vital tracking back from Evans and Lowe denied Cameron McGeehan and George Moncur respectively.

MacGillivray was called into action again midway through the first half, palming over a fierce drive from Woodrow.

The keeper also kept out an angled Moncur shot, while an effort from McGeehan was then diverted off target.

There was a brief interruption soon after, as one of the floodlights failed, but after consulting with both managers, referee Jon Moss decided it was fine to continue.

Pompey threatened on 33 minutes when Lee Brown whipped in a dangerous cross that Lowe volleyed wide.

Kieffer Moore fired wastefully wide at the other end, while some more good defending from Lowe stopped Brad Potts’ surge.

It was Barnsley on top as the interval approached, but the Blues were able to break the deadlock on 43 minutes.

Alex Mowatt tried to clear the ball, only to send it straight into the path of EVANS, who hit a crisp left-footed shot into the bottom corner from the edge of the box.

Both sides were struggling to keep hold of possession once the action restarted, no doubt hindered by the wet and windy conditions.

Long-range efforts from Jacob Brown and Potts went over the bar, as Barnsley went in search of a leveller.

The home crowd were growing frustrated and were appealing to Moss for some soft penalties, with each turned down by the official.

But their mood improved just after the hour mark, as Potts sent in a low cross that Woodrow neatly turned home at the near post.

Barnsley moved up a few gears after that, only for the Blues to then create an opening on the counter-attack.

Ben Thompson collected the ball in the centre and fed Oli Hawkins, whose low drive was kept out by the boot of Davies.

Curtis thought he should have been awarded a penalty after going down in the box, but Moss thought he fell too easily and brandished a yellow card.

The Republic of Ireland international was withdrawn moments later, with Anton Walkes coming on and Nathan Thompson joining Matt Clarke and Jack Whatmough in a back three.

It was still the Tykes looking more of a threat as the game entered its closing stages and Tom Naylor bravely threw himself in front of a thunderous Woodrow effort.

And they almost snatched a late winner, with Moore collecting a pass from Lloyd Isgrove, turning and sending a low shot inches past the post.


View the photos from the Blues' draw at Oakwell

Evans: We Dealt With Conditions


Gareth Evans saw his northern credentials put firmly to the test at Oakwell.


Barnsley had not lost on home soil, while Pompey were unbeaten on the road.

Tickets are still available for Pompey’s League One visit to Barnsley this weekend.

Blues fans have already snapped up more than 1,600 seats for the Oakwell contest, which kicks-off at 3pm on Saturday.

Supporters can also purchase tickets from the North Stand cash turnstiles at Barnsley on the day of the game, although there is an increase in prices.

Tickets booked online/over the phone before 3pm on Wednesday will have been sent out in the post, otherwise they can be collected from the Oakwell ticket office on Saturday.

If you are expecting tickets in the post and they do not arrive, please contact the Pompey ticket office by 4pm on Friday. We will not be able to help supporters who contact us on the day of the game. 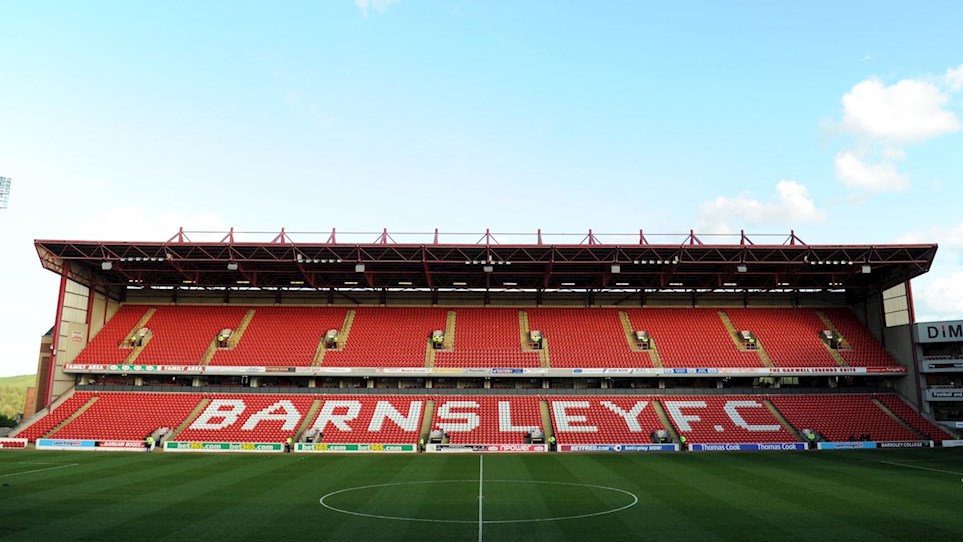 
Tickets for Pompey’s away game at Barnsley go on sale next week.