Pompey will look to end a positive 2018 on a high by collecting all three points at Fleetwood this weekend.

Kenny Jackett’s side are also aiming to bounce back from their first away defeat of the season against Gillingham on Boxing Day.

But they face a Cod Army outfit who are sure to be in confident mood after easing to a 3-0 victory over promotion hopefuls Doncaster.

It leaves Joey Barton’s side sitting 10th in the third tier standings, albeit eight points adrift of the play-off places.

They are a difficult side to beat at Highbury, with six victories and just two defeats on their patch in the league.

AFC Wimbledon – on the opening day of the season – and Barnsley are the only sides to have escaped with a maximum haul.

Like Pompey, they also have an FA Cup third round tie to look forward to the following weekend and will be keen to gain some revenge when they host the Dons.

It was the Blues who came out on top at Fratton Park earlier in the campaign, with Oli Hawkins scoring the only goal before Nathan Sheron was dismissed late on.

TEAM NEWS
Pompey will be without Nathan Thompson (hamstring) and Luke McGee (wrist), but otherwise have a full squad to choose from.

Fleetwood are also close to having a clean bill of health, with defender James Husband (hamstring) the only absentee.

VIEW FROM THE DRESSING ROOM
“The game can’t come quick enough for all of us now because we were disappointed to lose at Gillingham.

“Whenever that happens, it’s always very pleasing to have another match coming along straight away.”

Click here to read the full thoughts of Kenny Jackett ahead of Saturday’s match.

TICKETS
Pompey fans can buy tickets at Highbury on the day of the game. Click here for more details.

BETTING
Pompey are the 19/20 favourites with Sky Bet to secure all three points, while the hosts can be backed at 14/5. 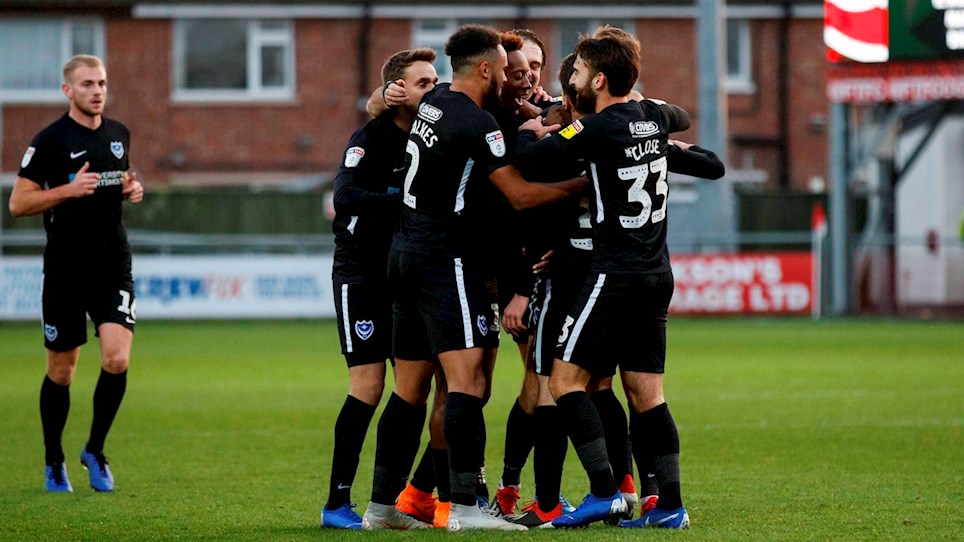 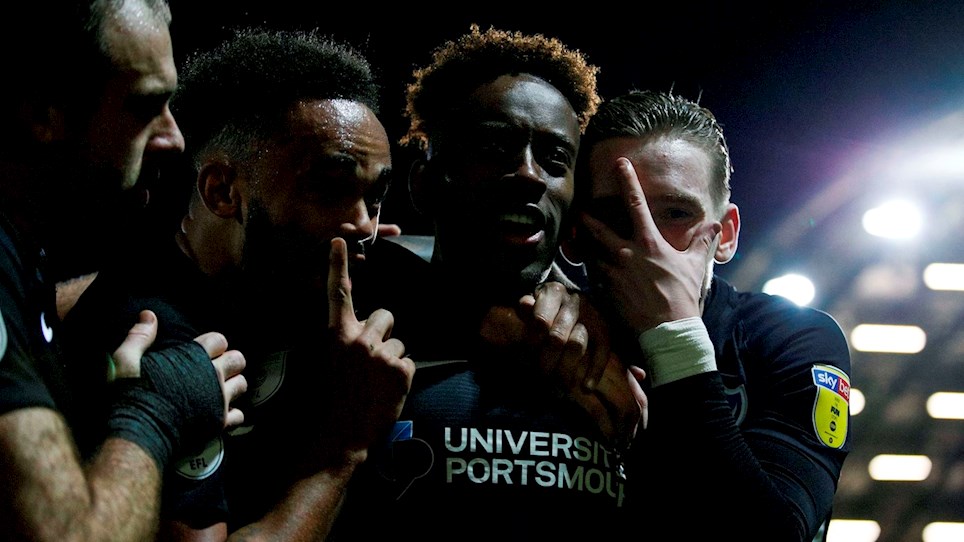 
View the photos from the Blues' final game of 2018 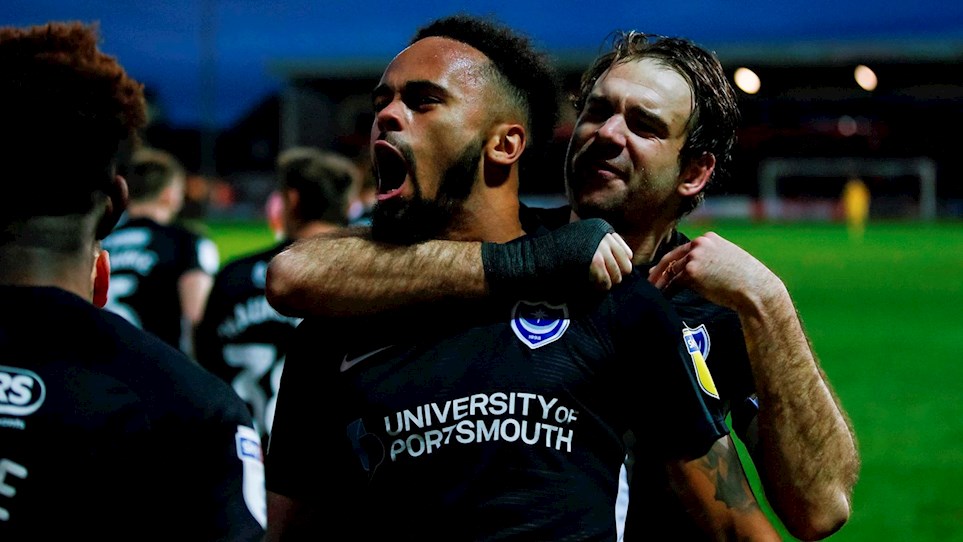 Walkes: What A Relief


It was his first start in the league since a victory at Bradford in early November.


It was a positive – and eventful – way for Pompey to bring the curtain down on a successful 2018.

by Neil Weld at Highbury

Pompey finished 2018 on a high by thrashing Fleetwood 5-2 in a dramatic League One contest at Highbury.

Ben Thompson’s stunning strike gave them the lead, only for Paddy Madden and a Ched Evans penalty to see the hosts ahead at the break.

Brett Pitman levelled with another spot-kick and a first goal of the season from Anton Walkes ensured they retook the lead.

It was left to Jamal Lowe to wrap things up with a brace that ensures Pompey will welcome in 2019 at the top of the table.

Kenny Jackett made three changes from the side that suffered a first defeat on the road at Gillingham on Boxing Day.

Two of them were enforced, with Walkes and skipper Pitman replacing Nathan Thompson (hamstring) and Oli Hawkins (ankle) respectively.

The other switch came in the middle of the park, where former Fleetwood star Gareth Evans made way for Ben Close.

That meant a switch to a 4-3-3 system, with Lowe and Ronan Curtis flanking Pitman in the forward line.

The hosts had a great opportunity in the opening stages, but Evans’ header was held low down to his left by Craig MacGillivray.

Pompey soon started to settle and Close was unable to make a clean connection with his shot, allowing Alex Cairns to save.

But the Cod Army keeper made an even better stop soon after, keeping out a volleyed effort from Matt Clarke after the defender’s first attempt had been blocked.

The visitors then received a blow when Lee Brown went down injured and had to come off, with Brandon Haunstrup replacing him at left-back.

There was reason to celebrate for the travelling supporters on 26 minutes, however, as their side took the lead.

It was a fine finish from THOMPSON, whose fierce effort from outside the box struck the underside of the crossbar and bounced down over the line.

Close might have doubled the lead, but could not get enough power on his header from a Lowe cross to trouble Cairns.

Instead it was Fleetwood who were next to score on 39 minutes, when Madden raced in to meet Lewie Coyle’s cut-back and arrow a first time shot right into the bottom corner.

And it soon got even worse for the Blues as Madden fired past the post, but went down after colliding with Clarke and, following a lengthy pause, referee Matt Donohue pointed to the spot.

It was Evans who stepped up to take the penalty, sending MacGillivray the wrong way to turn the contest on its head.

Pompey might have levelled deep into stoppage-time, only for Ross Wallace to clear behind and prevent Lowe from converting Curtis’ delivery at the back post.

The Blues were quickly out of the traps following the interval, but when a corner was cleared, Haunstrup fired wildly off target.

Hopes were raised soon after, though, when Marney fouled Thompson and – having earlier been booked for a challenge on Curtis – saw red.

A cross from Haunstrup was then hacked to safety, as Walkes raced into the box to try to make contact.

Jackett soon made an attacking switch, with Evans brought on to provide more of a goal threat and Close withdrawn.

But it was two other players who provided the drama that saw the Blues score twice in as many minutes to take the lead.

Donohue pointed to the spot for the second time after Curtis was brought down by Ross Wallace and PITMAN confidently slammed home the spot-kick.

It soon got even better, though, as the Cod Army failed to deal with a Curtis cross and WALKES bent a shot into the top corner with his left foot.

The action did not stop there, however, and MacGillivray kept out Wes Burns’ free-kick, then quickly recovered to keep out James Wallace’s follow-up effort.

There was a period of calm after that, although Pompey were not content to sit back and Curtis continued to torment the home defence.

But they were lucky to still be ahead when, following a Fleetwood corner, both Madden and James Wallace struck the post.

Tom Naylor then hacked the ball clear from the line before Pompey went up the other end to wrap things up.

LOWE collected a pass from Curtis and held off two challenges, turning neatly to sneak a low shot inside the near post.

And it soon got even better for the Blues, as LOWE raced on to Thompson’s fine pass and lashed home their fifth goal of an eventful afternoon.

Andre Green came on for Curtis in the closing stages, but the visitors were unable to grant the wishes of the travelling fans, who chanted ‘we want six’.

Clarke came closest to adding another, but his header was well saved by Cairns. It mattered not, as Pompey had done more than enough to ensure they would end the year at the summit.


View the photos from the Blues' final game of 2018

Walkes: What A Relief


It was his first start in the league since a victory at Bradford in early November.


It was a positive – and eventful – way for Pompey to bring the curtain down on a successful 2018.

Tickets are still available for Pompey’s League One visit to Fleetwood on Saturday.

Blues fans have already snapped up 800 seats and terrace places for the Highbury contest, which kicks-off at 3pm.

They can be purchased online here, by calling 0345 646 1898 or in person from the Anson Road ticket office until 3pm today.

But supporters can also buy from the Fleetwood ticket office on the day of the game. Please note that only terrace places remain.

Supporters collecting tickets at Fleetwood should visit their main ticket office on Saturday.

If you were expecting tickets in the post and they have not arrived, please contact the Pompey ticket office by 4pm today. We will not be able to help supporters who contact us on the day of the game. 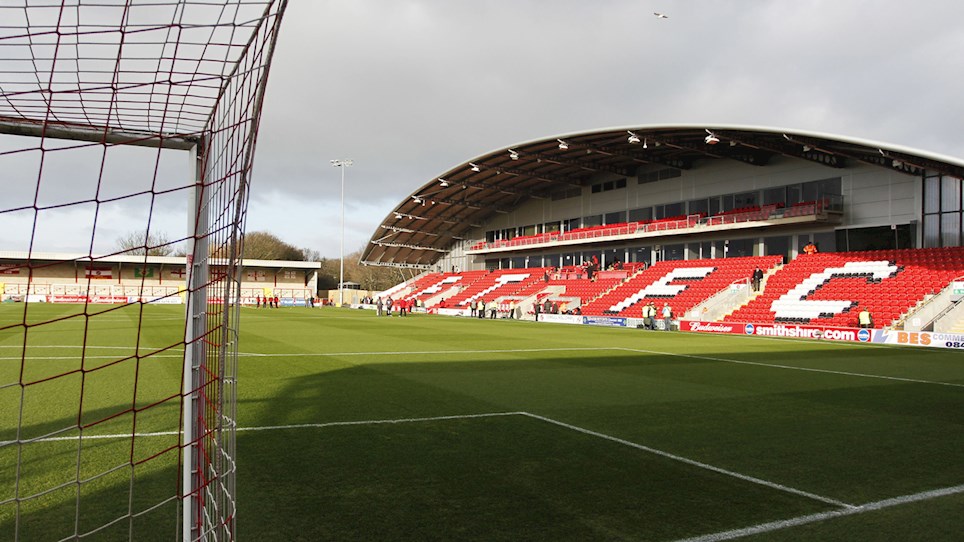 
Tickets for Pompey's League One game at Fleetwood go on sale next week.