By the time you wake up on Boxing Day, you are fed up of turkey, bored by what the television has to offer and starting to regret all that overindulgence.

Well, fear not – the festive football schedule provides a chance to blow away those cobwebs, as Pompey head to Gillingham (1pm kick-off).

The table-topping Blues know that victory would put more pressure on their promotion rivals, with their game ending before all the others begin.

But the hosts are one of only two sides to have beaten them in League One this season, securing a 2-0 victory at Fratton Park in October.

That was their second meeting of the campaign, with Kenny Jackett’s men easing to a 4-0 triumph on home soil in the Checkatrade Trophy.

Gillingham are currently down in 19th position and just four points clear of the relegation zone at the halfway stage.

Steve Lovell’s men go into the contest on the back of a 2-0 defeat at high-flying Charlton and have taken a single point from their past three league matches at Priestfield.

Pompey won on their trip to Kent last term, with Matty Kennedy netting the only goal of the game in front of the Sky Sports cameras.

TEAM NEWS
Jackett is close to having a fully-fit squad to choose from, with Luke McGee (wrist) the only player currently sidelined.

Defender Max Ehmer will be missing for the hosts after dislocating his shoulder at Scunthorpe earlier this month.

VIEW FROM THE DRESSING ROOM
Read the thoughts of Kenny Jackett and Oli Hawkins or register for a free iFollow account to watch the below video.

TICKETS
Pompey are no longer selling tickets for this match, but they can be bought from the cash turnstiles at Priestfield on the day of the game. Click here for a list of prices.

MATCH COVERAGE
Domestic iFollow subscribers can listen to live commentary from Andy Moon and Guy Whittingham by signing into their account and visiting the match centre from 12.30pm on Boxing Day.

BETTING
Pompey are the 3/4 favourites with Sky Bet to secure all three points, while the hosts can be backed at 10/3. 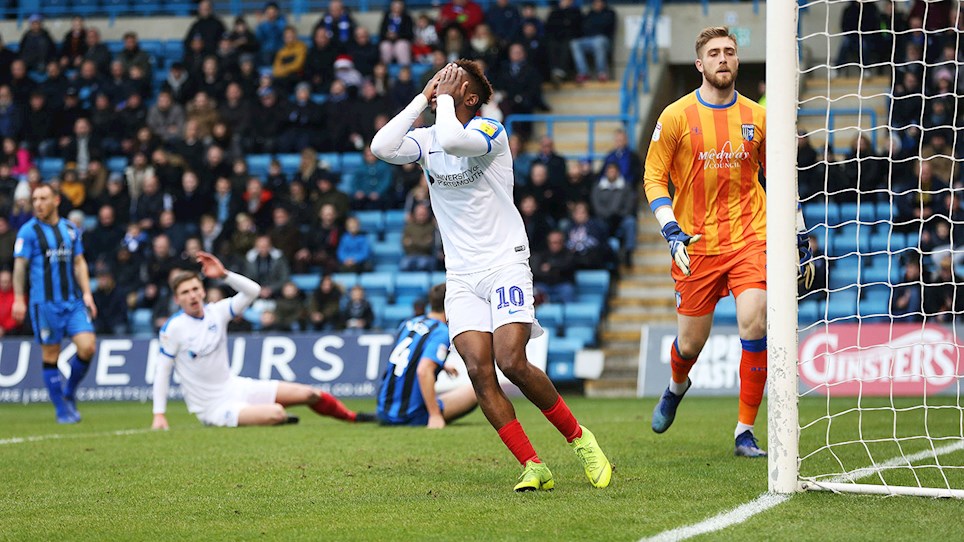 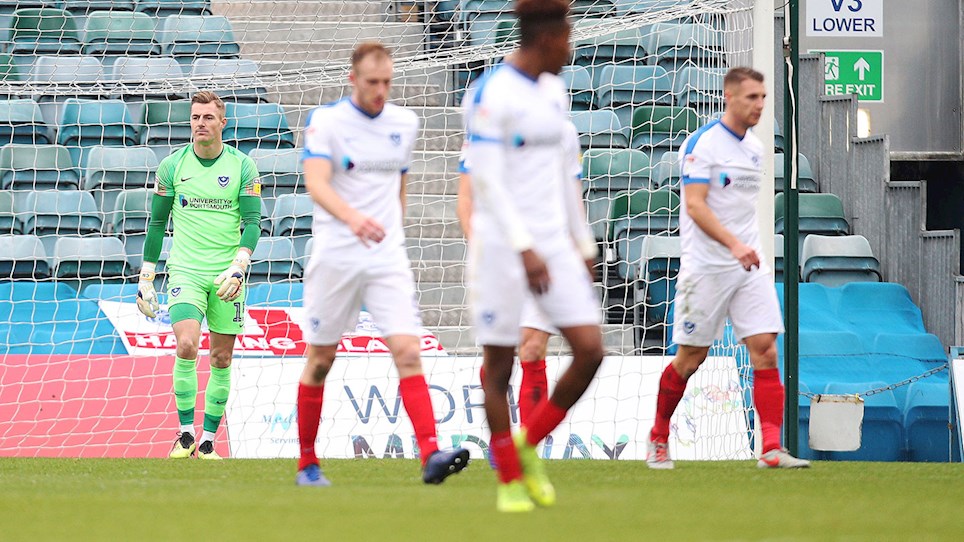 
View the photos from a rare off day for the Blues 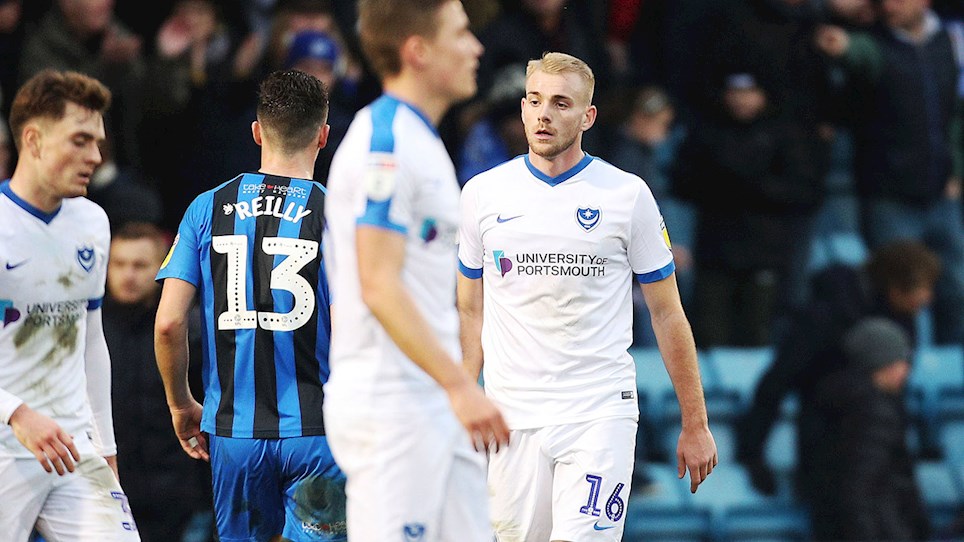 Whatmough: We Need To Bounce Back


The fact that it took until Boxing Day for Pompey to suffer a league loss this season is fairly impressive. Jackett: We Couldn't Find A Way Through


Kenny Jackett bemoaned Pompey’s inactivity in the final third as they suffered a first defeat on the road this season.

by Neil Weld at Priestfield

There was a distinct lack of Christmas cheer at Priestfield, as Gillingham inflicted their second defeat of the season over Pompey.

The visitors were in control for long periods of the contest, but suffered a distinctly off day in front of goal.

And Josh Parker made the most of a rare chance for their opponents to net the first goal of the contest just before half-time.

The Blues had to play the closing stages a man down, with Nathan Thompson limping off after all three changes had been made.

And Gillingham then made sure of all three points in stoppage-time, as Callum Reilly fired home a penalty.

Kenny Jackett stuck with the same side that beat promotion rivals Sunderland on home soil at the weekend.

And there did not appear to be any festive fatigue, as the visitors set about dominating the opening 45 minutes.

But for all their control of possession and neat passing build-up, Gills keeper Tomas Holy was not really tested.

A sliced effort from Ronan Curtis was blocked before it could trouble the stopper, who tipped away a Gareth Evans delivery before the Republic of Ireland international could capitalise.

Moments later, a teasing ball across the face of goal from Ben Thompson somehow managed to evade everyone.

Pompey did go close on eight minutes when a fierce goal-bound effort from Evans took a deflection to divert the ball off target.

Oli Hawkins – who was clearly having his shirt tugged by Alex Lacey – then sent an effort agonisingly wide of the post.

It was pretty much one-way traffic, but the Blues were just lacking that final killer ball to really hurt their hosts.

They won a total of seven corners before the break and a couple of them were headed off target by Hawkins.

And the striker met another Evans set-piece – after Holy had pushed Curtis’ effort wide – only for Barry Fuller to clear from the line.

But the Blues were then caught out by a sucker-punch just before the interval, as a cross from Elliott List was emphatically headed home by Parker.

Pompey immediately set about trying to find a leveller once the action restarted and the hosts eventually hacked clear following a scramble in their box.

A low right-sided delivery from Ben Thompson then somehow managed to evade both Jamal Lowe and Hawkins.

But Gillingham soon threatened at the other end, with Dean Parrett’s deep free-kick missing everyone and having to be pushed behind by Craig MacGillivray.

Holy should at least have been tested on 54 minutes when an unmarked Evans collected a pass from Lee Brown, only to fire over the bar.

Pompey’s skipper hit a cleaner effort from long-range soon after, although the ball was comfortably held by the keeper.

It was generally proving pretty profligate from the visitors and Hawkins could not send his header on target after getting above Gabriel Zakuani to meet a Curtis cross.

And the striker was withdrawn just before the hour mark, with Brett Pitman coming on to add some fresh legs to the forward line.

Jackett made his other two changes not long after, as Lowe and Curtis made way for Andre Green and David Wheeler.

It was Pitman who had the first chance to level, but was unable to make contact with Brown’s low cross at the near post.

And the Blues were dealt a blow when Nathan Thompson pulled up on 77 minutes and had to be helped off the pitch.

With all three substitutions having already been made, it meant the visitors would need to see out the rest of the game with just 10 men.

And their opponents almost took advantage when the ball fell for Billy Bingham inside the box, but he could not beat MacGillivray.

And the hosts wrapped things up when Whatmough crudely ended List’s path to goal, with Reilly confidently slamming home the spot-kick.


View the photos from a rare off day for the Blues

Whatmough: We Need To Bounce Back


The fact that it took until Boxing Day for Pompey to suffer a league loss this season is fairly impressive.

Jackett: We Couldn't Find A Way Through


Kenny Jackett bemoaned Pompey’s inactivity in the final third as they suffered a first defeat on the road this season.

Due to a late delivery, some Pompey fans will need to collect their tickets for the Boxing Day game at Gillingham rather than receiving them in the post.

This will only affect supporters who have ordered seats in the Lower Tier of the Brian Moore Stand.

Anyone whose ticket(s) will not be sent out in the post will be emailed directly by the Pompey ticket office.

They will be able to collect their ticket(s) from main reception at Fratton Park from 9am on Saturday, which will remain open until 6pm after the Sunderland game.

Any tickets that have not been collected can be picked up from turnstiles 20-21 at Gillingham on the day of the game.

Pompey fans can still buy tickets for the League One fixture, which kicks-off at 1pm. Click here for more details.


Tickets for Pompey’s festive fixture at Gillingham go on sale next week.