The quest to remain at the League One summit takes a break this weekend, as Pompey turn their attention towards securing FA Cup progress.

Kenny Jackett’s side will visit Spotland for the third time in 2018 to face Rochdale for a place in the third round.

Both teams know that a potential clash with one of the Premier League big-boys is the reward for going through.

The Blues have only cleared the first hurdle on one other occasion since reaching the FA Cup final in 2010, making it as far as the fourth round in 2015/16.

Jamal Lowe, Brett Pitman and Matt Clarke were on target when Pompey recovered from conceding an early goal to secure a 3-1 triumph at Rochdale earlier in the season.

Their opponents are currently sitting 17th in the League One table and left Oxford on the back of a 4-2 defeat on Tuesday evening.

Dale reached this stage of the competition with a narrow win over non-league Gateshead on home soil.

But they got all the way to the fifth round last term, holding Tottenham to a draw before eventually losing 6-1 in the Wembley replay.

TEAM NEWS
David Wheeler (back/hamstring) is missing for Pompey after collecting an injury in Tuesday’s victory over Walsall.

Joe Mason (groin) is not quite ready for a return, while Dion Donohue (hamstring) is also still sidelined.

The manager chats ahead of Pompey's FA Cup tie away to Rochdale.

TICKETS
Pompey fans will be able to purchase tickets from the cash turnstiles at Spotland on the day of the game.

MATCH COVERAGE
Domestic iFollow subscribers can listen to live commentary from Andrew Moon and Mark Kelly by signing into their account and visiting the match centre from 1.30pm on Sunday.

The match has been selected for overseas broadcast and supporters should check their local listings to see if the game is being televised in their region.

Fans in the UK will be able to watch goals and key moments as part of the Final Score programme on BBC One.

BETTING
Pompey are the 23/20 favourites with Sky Bet to secure progress on Sunday, while the hosts can be backed at 11/5. 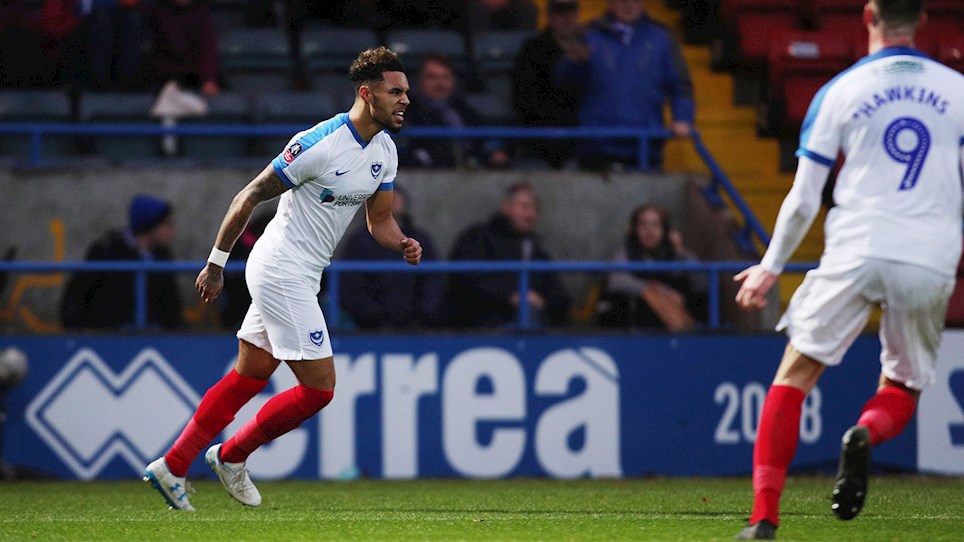 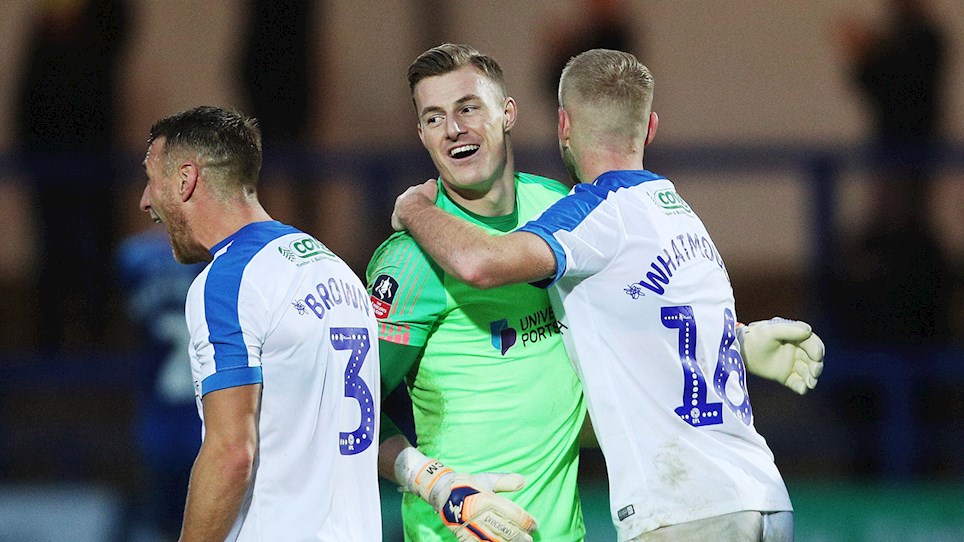 
View the photos from the Blues' second round success 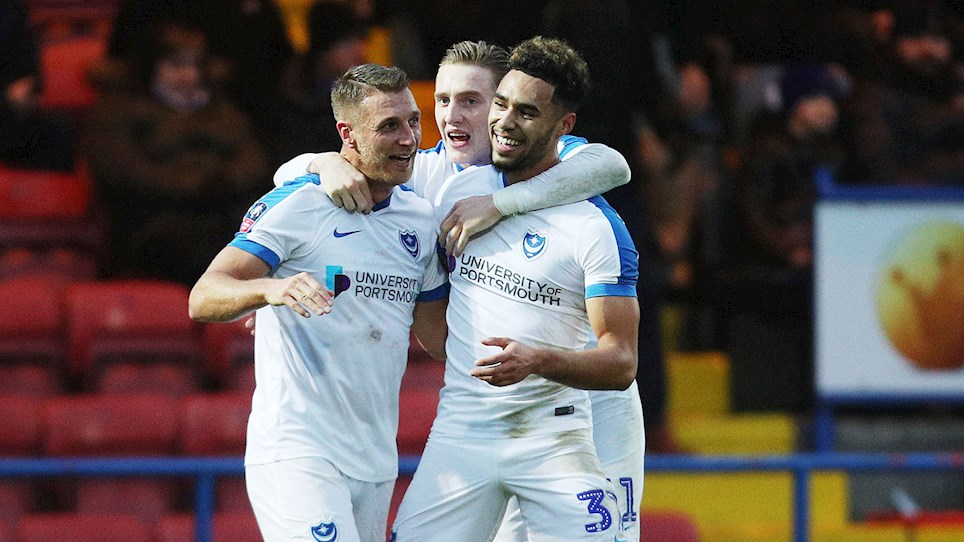 
A replay was looking likely when Andre Green entered the pitch for the final 15 minutes at Rochdale. Jackett: We Found A Way To Win


It was certainly not Pompey’s most assured display of the what has so far been a successful season.

Andre Green scored at the death to see off Rochdale and send Pompey into the third round of the Emirates FA Cup.

Both sides had struck the woodwork in a Spotland contest that otherwise failed to ignite, with Ronan Curtis hitting the bar for the Blues.

But the visitors were unusually subdued after the break and a replay was looming until a deflected effort from substitute Green settled the tie.

Kenny Jackett made one change from the side that beat Walsall in the league earlier in the week.

Tom Naylor missed out with a slight groin problem, meaning that Ben Close was recalled to Pompey’s midfield.

Both sides took a while to hit their stride on a soggy Sunday afternoon in the north-west, with the keepers enjoying a quiet opening 45 minutes.

An Oli Hawkins header was deflected comfortably into the arms of Josh Lillis, while the Blues back-line dealt with a couple of deliveries into their box.

Jordan Williams should at least have tested Craig MacGillivray on 11 minutes, but fired wastefully wide after doing well to bring the ball under control.

The visitors began to look the more assured side, although efforts from Ben Thompson and Gareth Evans were off target and blocked respectively.

Pompey’s skipper went closer midway through the half, hitting a fierce and cleanly-struck volley narrowly over the crossbar.

There was plenty of neat build-up play on display, but they were too often let down by the final pass or shot.

And Jordan Williams might have made them pay at the other end late in the half, sending an attempt just past the post.

There was still time for two noteworthy moments for the Blues just before the sides went in for the interval.

Curtis smashed the ball against the crossbar and such was the ferocity of his effort, it came back to the Republic of Ireland international, who was unable to get a second shot away.

His fellow forward Jamal Lowe then went down in the box and despite the travelling fans appealing for a penalty, referee Seb Stockbridge instead booked him for diving.

A foul by Close gave Dale the first opportunity of the second half, but Matt Done’s free-kick struck the wall and was deflected behind.

The hosts then broke quickly up the pitch soon after, but MJ Williams’ shot was so high it flew out of the stadium.

Pompey had struggled to get going after the break and were perhaps fortunate not to have been punished for that.

There was certainly no lack of commitment, though, with Nathan Thompson’s fury at not being awarded a throw earning the right-back a booking.

Rochdale had another opening just past the hour mark when Calvin Andrew latched on to Ian Henderson’s pass, but MacGillivray saved with his feet.

And they went even closer on 69 minutes, as Done’s thunderous drive came back off the corner of post and bar.

A craning Hawkins saw his header saved by Lillis at the other end, as the Blues tried to pose more of a threat.

Brett Pitman – who has netted five times in the previous three meetings with Rochdale – provided an extra option on 72 minutes, with Evans making way.

But it was Jack Whatmough who missed a decent chance soon after, nodding wide after racing in to meet Lee Brown’s free-kick.

Jackett then made his second substitution, with Lowe withdrawn for Aston Villa loanee Green out wide.

It was Rochdale that were next to go close, however, as Henderson hit a sweet volley that dripped just over the Blues bar.

But, with a replay looking likely, Ryan Delaney brought down Green right on the edge of the box, earning the defender a yellow card.

Brown squared the free-kick to GREEN, whose shot took a wicked deflection to deceive Lillis and leave Rochdale reeling.

They almost levelled in stoppage-time, but MacGillivray denied Henderson from close range to ensure Pompey booked their place in the third round.


View the photos from the Blues' second round success


A replay was looking likely when Andre Green entered the pitch for the final 15 minutes at Rochdale.

Jackett: We Found A Way To Win


It was certainly not Pompey’s most assured display of the what has so far been a successful season.

Blues fans have already snapped up around 600 unreserved seats for the second round Spotland contest, which kicks-off at 2pm on Sunday.

Supporters can also purchase tickets from the cash turnstiles at Rochdale on the day of the game.

Wheeler and ambulant tickets are priced at the above rates and include a carer if on the highest rate of DLA or PIP.

Tickets booked online/over the phone before 3pm on Wednesday will have been sent out in the post, otherwise they can be collected from the Spotland ticket office on Sunday.

If you are expecting tickets in the post and they do not arrive, please contact the Pompey ticket office by 4pm on Friday. We will not be able to help supporters who contact us over the weekend.