Pompey will try to reach the final of the Checkatrade Trophy for the first time – including any of the competition’s previous guises – tonight.

But first they must see off a Bury team who are full of confidence as they try to secure automatic promotion to League One.

Ryan Lowe’s side sit second in the standings and are just two points behind leaders Lincoln – who have a game in hand – in the battle for the title.

While Wembley will be a welcome reward for both sides, the main priority for the hosts will be bouncing back to the third tier at the first attempt following last season’s relegation.

The Shakers are unbeaten in 12 matches in all competitions and have won nine of those fixtures, including a 3-1 victory over Oldham at the weekend.

Their path to this stage started with finishing as runners-up to Rochdale in Northern Group B, which also included Leicester U21s and Fleetwood.

Bury have since seen off Mansfield, Accrington and Oxford, and are also trying to reach the final for the first time.

The sides have never previously met in this competition, but Pompey were beaten 1-0 on their last trip to Gigg Lane in the penultimate game of last season.

TEAM NEWS
Lloyd Isgrove, Bryn Morris and the injured Andy Cannon are all cup-tied, having featured in the competition this season for their previous clubs.

Pompey will also be without Jack Whatmough (knee), while there is a doubt over Omar Bogle (hamstring), but Nathan Thompson is available again.

Jermaine Beckford (knee) is out for the hosts and Stephen Dawson (foot) is struggling, although Caolan Lavery could feature against his former club,

VIEW FROM THE DRESSING ROOM
Read the thoughts of Kenny Jackett and Christian Burgess or register for a free iFollow account to watch the below video.

TICKETS
Seats are no longer available to buy from Pompey, but can be purchased at the Gigg Lane ticket office or from the cash turnstiles this evening.

MATCH COVERAGE
Domestic iFollow subscribers can listen to live commentary from Andy Moon and Michael Brown by signing into their account and visiting the match centre from 7pm this evening.

Viewers in the UK can watch the game on Sky Sports Football, while overseas supporters should check their local listings.

BETTING
Pompey are the narrow 6/4 favourites with Sky Bet to win after 90 minutes, while the hosts can be backed at 13/8. 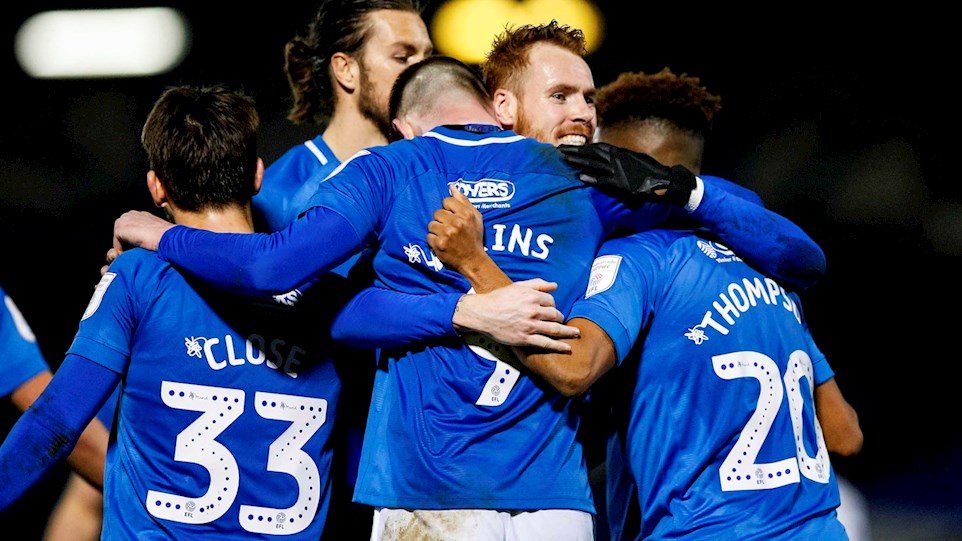 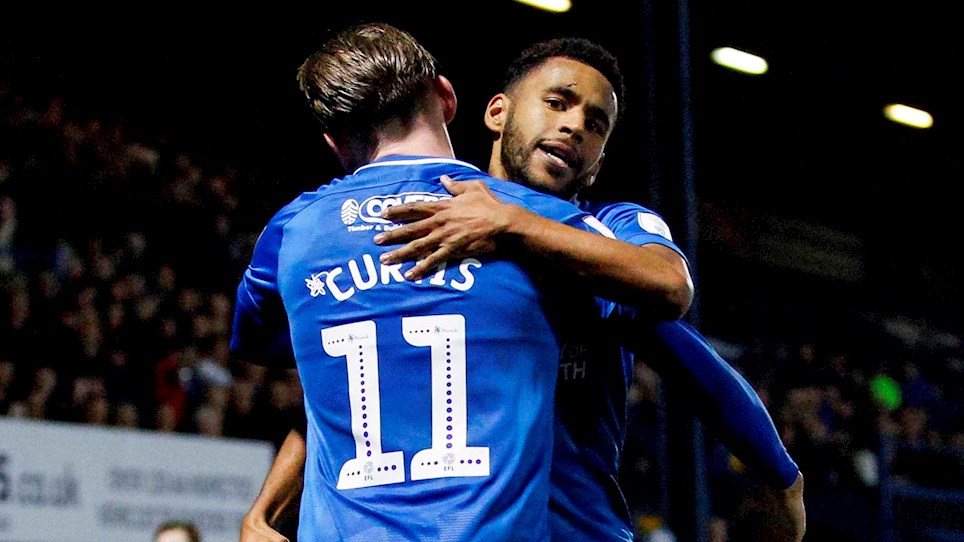 Curtis: Wembley Will Be Incredible 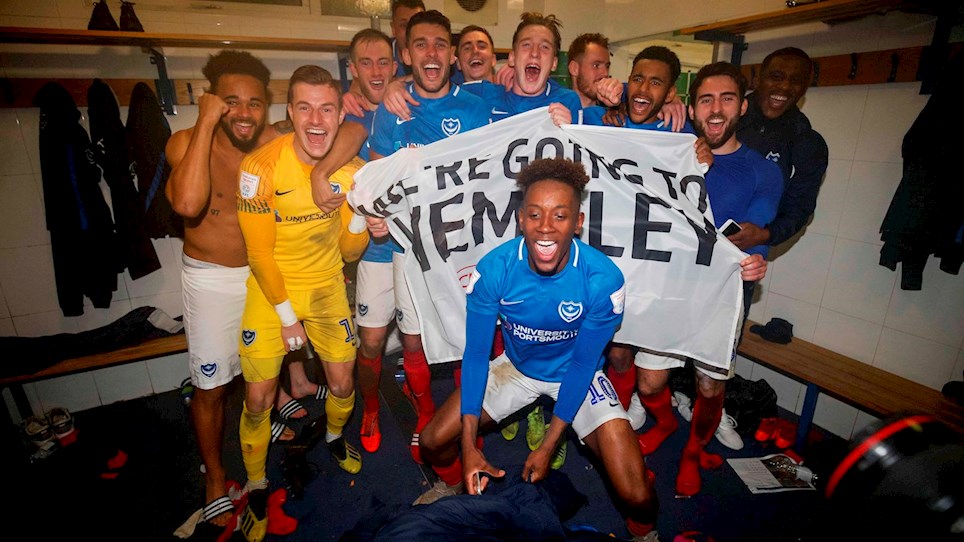 
View the photos from the Blues' semi-final triumph


It was his brilliant free-kick that got the ball rolling at Bury.

by Neil Weld at Gigg Lane

Pompey romped to a 3-0 victory at Bury to book their place at Wembley in the final of the Checkatrade Trophy.

The first half was a relatively even affair, but the Blues exploded into life after the interval to put their League Two hosts to the sword.

A brilliant Gareth Evans free-kick got the ball rolling, while Oli Hawkins and Ronan Curtis then struck to effectively wrap up the contest.

Pompey will now have to wait for a week before they learn whether their opponents at the national stadium next month will be Bristol Rovers or Sunderland.

Kenny Jackett made three changes from the side that drew with Barnsley in the league at the weekend.

Two of them were enforced, as Hawkins and skipper Evans replaced the injured Omar Bogle and cup-tied Bryn Morris respectively.

Nathan Thompson had also fully recovered from a knee problem, so Anton Walkes made way at right-back.

Christian Burgess was presented with the Player of the Round award for his quarter-final display before kick-off and made his 150th appearance for the club.

It was an open start to proceedings, with crosses from Byron Moore and Lee Brown causing problems at either end.

The hosts had a great chance to break the deadlock after just five minutes, with Craig MacGillivray getting down to his left to keep out Nicky Maynard’s curler.

But the danger was not over and Brown was forced to hack the ball to safety before a white-shirted player could capitalise.

Pompey then created an opportunity of their own just seconds later, as Curtis spun on the edge of the box and forced Joe Murphy to make a save at his near post.

Hawkins also had an effort blocked by Will Aimson from Brown’s cut-back, with both sides continuing to play with an attacking mindset.

It was Bury’s turn to try their luck on 18 minutes, but former Fratton loanee Caolan Lavery bent his shot narrowly past the post.

The hosts started to see more of the ball as the first half progressed, although were unable to cause MacGillivray any more problems.

Half-chances were the best the Blues could muster at the other end and Curtis drilled wide after Thompson’s teasing delivery was headed away.

And when Viv Solomon-Otabor’s path to goal was blocked, Brown crossed for Hawkins to head narrowly over.

A deep free-kick from Evans caused alarm for the Shakers on 36 minutes, but Curtis could not make a clean connection in the box.

Then, just before the break, Hawkins slipped a pass through to Curtis down the right and his centre had to be headed away by Aimson before it could reach Solomon-Otabor.

Solomon-Otabor did not emerge for the start of the second half, with Jamal Lowe replacing him and Curtis switching to the left.

Pompey looked bright once the action restarted, although a deep free-kick from Evans was dealt with by the Bury back-line.

And when the ball bounced up for Ben Close just inside the area, Aimson bravely dived in to block the midfielder’s volley.

The Blues were dominating possession and long-range attempts by Lowe and Burgess forced Murphy to make saves, albeit comfortable ones.

There was a scare at the other end when Burgess’ ball across goal was almost intercepted by Lavery, but MacGillivray got the ball clear.

Instead it was the visitors who made their pressure count with two goals in quick succession just past the hour mark.

Close was brought down by Callum McFadezen just outside the box and four players gathered around the ball.

But it was EVANS who eventually took the free-kick and bent home a fine effort that left Murphy rooted to the spot.

And the advantage was soon doubled, as Evans' cross was nodded back across goal by Thompson for HAWKINS to slam into the roof of the net.

Bury soon had chances to reduce their deficit, as Maynard arrowed a shot agonisingly past the post, while Jay O’Shea hit a fierce effort straight at MacGillivray.

But Pompey were still looking to attack themselves and a long-range drive from Evans was parried away by Murphy, with a brilliant Aimson challenge stopping Curtis converting the loose ball.

CURTIS did have his goal on 77 minutes, however, with a fine finish that was lashed right into the side of the net.

And MacGillivray then ensured the visitors’ kept their three-goal lead, diving to his left to keep out a Lavery free-kick that appeared destined for the top corner.

But there was a blow for the Blues late on when Burgess limped off the pitch, with Walkes replacing him for the final few minutes.

Curtis: Wembley Will Be Incredible


View the photos from the Blues' semi-final triumph


It was his brilliant free-kick that got the ball rolling at Bury.

Blues fans have already snapped up 400 seats in the East Stand for the semi-final contest at Gigg Lane.

But supporters can also buy from the Bury ticket office or cash turnstiles on the evening of the game.

Wheelchair/ambulant tickets are priced £5 and include a free carer if on the highest rate of DLA or PIP.

Supporters collecting tickets at Bury should visit their ticket office. 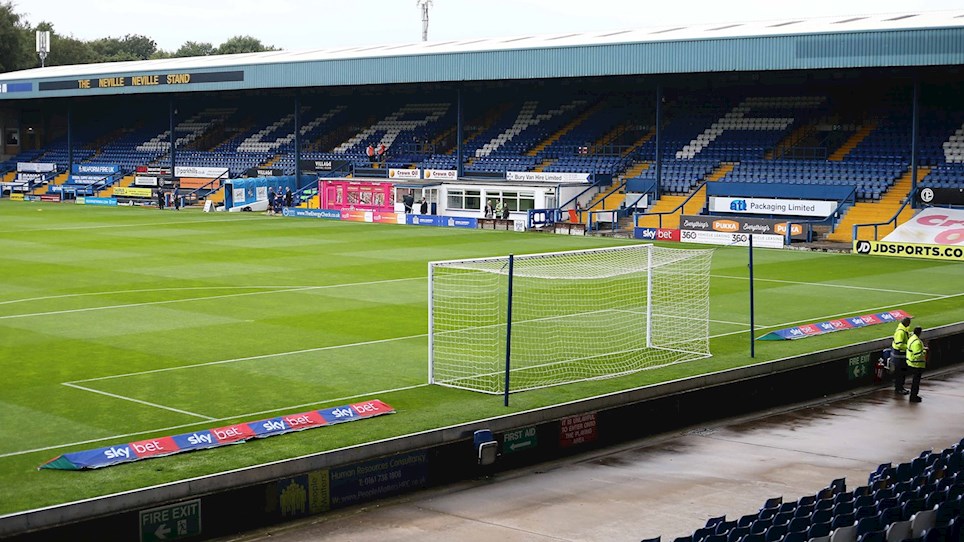 
Tickets for Pompey’s Checkatrade Trophy semi-final at Bury go on sale next week.