Pompey will look to revive their stuttering league form when they make the trip to Plymouth on Saturday.

Kenny Jackett’s side began 2019 with victory over AFC Wimbledon, but since then their only wins have arrived in cup competitions.

They still sit just one point outside the automatic promotion places, however, and will face a team in 16th position in Devon.

But it has been an incredible rise for an Argyle side who were without a League One triumph until the 12th game of the season.

The Pilgrims were in the drop zone at the start of the year, but have won five of their past six games to move four points clear.

It means that Derek Adams’ men sit at the top of the division’s form table as they look to keep climbing the standings.

There are echoes of last term, when it also appeared that Plymouth would be embroiled in a battle against relegation, only to end up narrowly missing out on a play-off spot.

Ronan Curtis’ brace and a goal from Jamal Lowe saw Pompey ease to a 3-0 victory when the sides met earlier in the campaign.

Their two most recent Home Park clashes have ended all square, with the Blues last winning there in August 2015.

TEAM NEWS
Pompey will be without Luke McGee (wrist) and Jack Whatmough (knee), while Tom Naylor starts a two-match ban.

There are also doubts over the fitness of Dion Donohue (shin), Lloyd Isgrove (knee) and Bryn Morris (ankle).

Conor Grant (calf), Joel Grant (thigh) and Jamie Ness (calf) are all missing for Plymouth, who could hand a debut to defender Lloyd Jones.

TICKETS
Pompey have sold their full allocation of tickets and no more will be available at the ground on Saturday.

BETTING
Pompey are the 19/20 favourites with Sky Bet to secure all three points, while the hosts can be backed at 13/5. 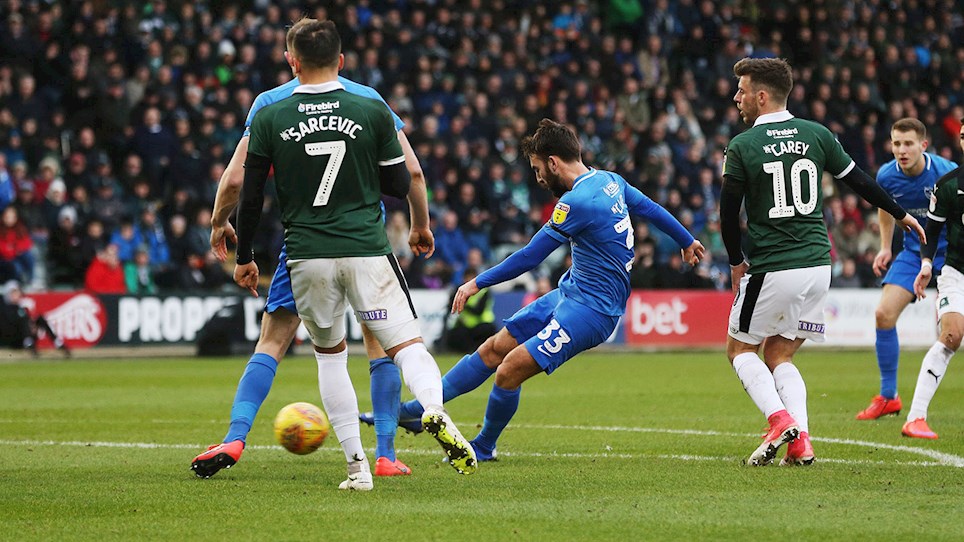 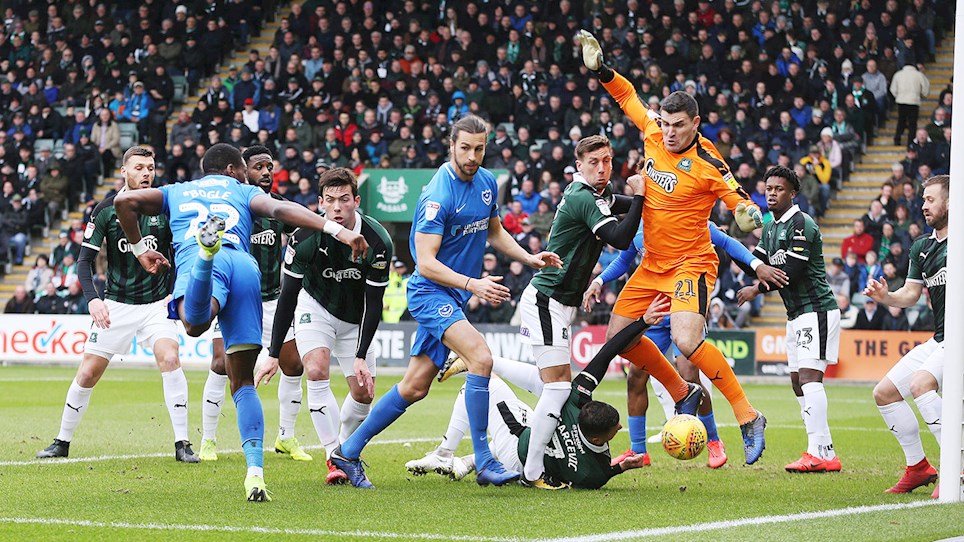 
View the photos from the Blues' draw at Home Park


It was a goal that opened his League One account for the season. Jackett: Getting Up To Speed


It had been pretty uninspiring stuff before the break at Home Park.

A first league goal of the season for Ben Close was not enough to secure a return to winning ways, as Pompey drew 1-1 with Plymouth.

The first half at Home Park was a turgid non-event, but the game really exploded into life after the break.

Close’s effort was reward for the fine support from the travelling Blue Army, but Graham Carey’s impressive free-kick ensured the spoils would be shared.

Kenny Jackett made five changes from the side that exited the FA Cup at QPR earlier in the week.

Omar Bogle returned to lead the line, while there were also recalls for Nathan Thompson, Bryn Morris, Ronan Curtis and skipper Gareth Evans.

Oli Hawkins, Anton Walkes and Adam May all dropped to the bench, Louis Dennis missed out completely and Tom Naylor started a two-match ban for collecting 10 yellow cards.

The sold-out away contingent made plenty of noise in the build-up to kick-off and that did not change once the action started.

But they did not have much to get excited about in an opening 45 minutes that was full of endeavour, if short on quality in the final third.

A corner from Evans led to Bogle having a couple of shots blocked in quick succession, although referee Ben Toner spotted an infringement and blew for a foul.

The swirling wind would have been causing problems, especially with Home Park currently boasting only three sides.

And that was perhaps a reason why the contest failed to spark into life, although deliveries into the box from Evans and Close both had to be dealt with.

Both goalkeepers might as well have stayed in the dressing room, as their gloves remained unsoiled as the interval approached.

Half-chances were about as good as it got, with Curtis scuffing a shot wide after Thompson’s effort had been deflected into his path.

Not much was happening at the other end, with Ruben Lameiras’ dangerous low delivery turned behind, while Freddie Ladapo hit a long-range effort high over the bar.

Argyle keeper Kyle Letheren was finally called into action just before the break, but was not overly troubled by Matt Clarke’s tame header.

Pompey were first to threaten following the restart when Bogle rose at the far post to meet Lee Brown’s cross with a firm header that was gathered by Letheren.

But the hosts then had a decent opening of their own, as Antoni Sarcevic dug the ball out for Ladapo, whose effort was deflected narrowly over the bar.

It was certainly proving to be a more action-packed contest and when Curtis picked the ball up on the left, he drove inside and hit a fierce drive that Letheren did well to tip over.

And the Blues were ahead from the resulting corner, with Evans’ delivery only cleared as far as CLOSE, who drilled the ball home from the edge of the box.

The midfielder then sent a fine pass over the top for Bogle to race on to, with Ryan Edwards doing well to prevent the striker getting a shot away.

That was Bogle’s last contribution to the game, as Jackett replaced him with Oli Hawkins on 67 minutes.

Argyle boss Derek Adams then began ranting on the touchline when he felt Evans’ free-kick should have warranted a second yellow card, instead earning a booking for himself.

But his mood changed when Thompson was adjusged to have fouled Yann Songo’o 25 yards from goal and Carey stepped up to curl home a fine free-kick.

They might have had another after Morris failed to clear, but Lameiras’ curler was deflected past the post.

Pompey were being pegged back, but had a chance to capitalise when Evans kept the ball in play on the right.

His fine deep pass found Hawkins, who nodded the ball down to Curtis, but the Republic of Ireland international fired high over the bar.

A curler from Evans was plucked from the air by Letheren, while Argyle also applied late pressure before the referee’s whistle brought a competitive clash to a close.


View the photos from the Blues' draw at Home Park


It was a goal that opened his League One account for the season.

Jackett: Getting Up To Speed


It had been pretty uninspiring stuff before the break at Home Park.

A ballot will be held to allocate tickets for Pompey’s League One visit to Plymouth.

Blues fans have been given just 1,200 reserved seats in the Barn Park End for the Home Park clash on Saturday, February 9 (3pm kick-off).

We recommend that fans apply quickly and easily by using our eticketing service to avoid the queues.

Valid debit/credit details must be supplied, as if successful, ticket costs and booking charges will be debited from your account. If the payment is not authorised then the ticket will be assigned to another applicant.

Applicants will be informed by email whether or not they have been successful.

*Serving members of the armed forces are also eligible for this rate with a valid ID card.

Wheelchair tickets cost £19 for adults, £15 for seniors/young persons and £8 for juniors. Ambulant supporters pay the relevant age band. Tickets include a carer if on the highest rate of DLA or PIP.