Kenny Jackett’s side are unbeaten in their last three league games, but have failed to win any of them.

Now they face a team who are only being kept out of the relegation places by their superior goal difference.

The Gas currently sit in 20th position and are joined on 33 points by the three clubs directly below them – Oxford, Shrewsbury and Bradford.

But they have enjoyed an upturn in form since Graham Coughlan replaced Darrell Clarke as manager midway through December.

After suffering a defeat at Sunderland in his first match in charge, the Pirates have been beaten just once.

They have also progressed to the last four of the Checkatrade Trophy, where they will face the Black Cats – who they host in the league on Saturday – in a fortnight.

Rovers have a better record on the road than at the Memorial Stadium and have triumphed five times on their third tier travels this term.

It was Pompey who came out on top when the sides met earlier in the season, with Ronan Curtis grabbing a late winner after Chris Lines had cancelled out a Gareth Evans opener.

Stuart Sinclair could make his first appearance since New Year’s Day for the visitors after suffering from concussion.

Tareiq Holmes-Dennis will be hoping to feature against his former club, but Pompey’s League Two title-winning winger Kyle Bennett has left Rovers for a loan spell at Swindon.

TICKETS
Secure your seat online here or pay a visit to the Anson Road ticket office.

From 5.30pm this evening, tickets will also be available (subject to availability) from the matchday ticket office in Frogmore Road.

Domestic subscribers will, as usual, be able to listen to listen to live commentary from Chris Wise and Guy Whittingham by signing into their account and visiting the match centre from 7pm.

BETTING
Pompey are the 3/4 favourites with Sky Bet to secure all three points, while the visitors can be backed at 18/5. 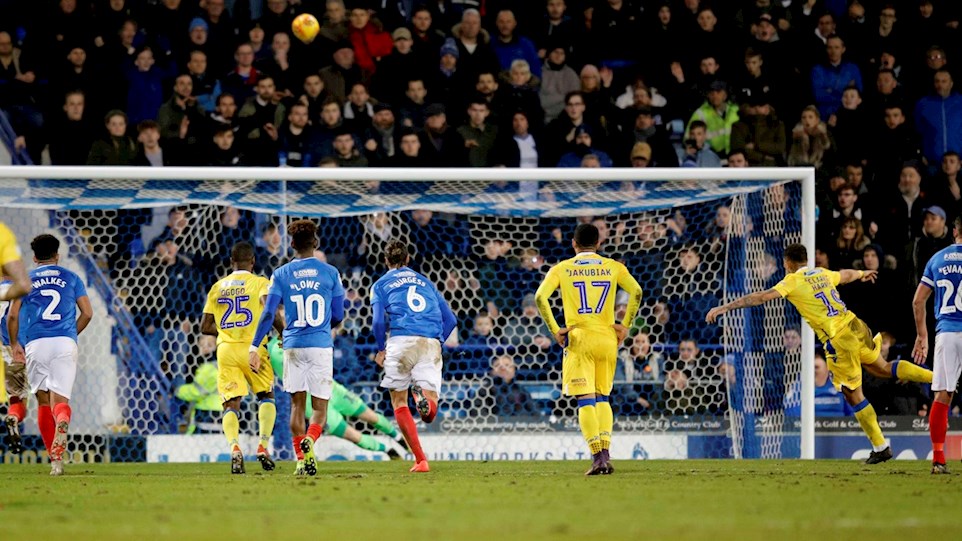 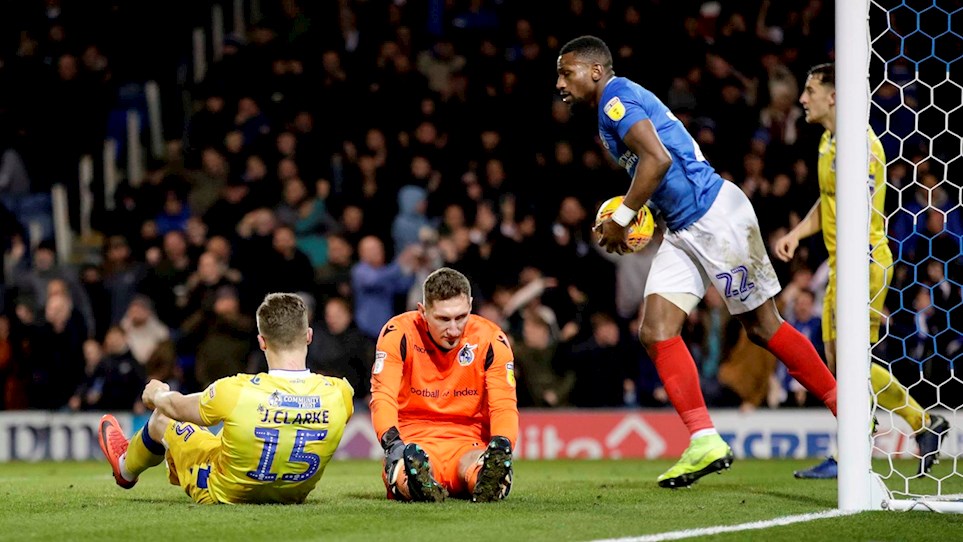 
View the photos from the Blues' latest League One stalemate 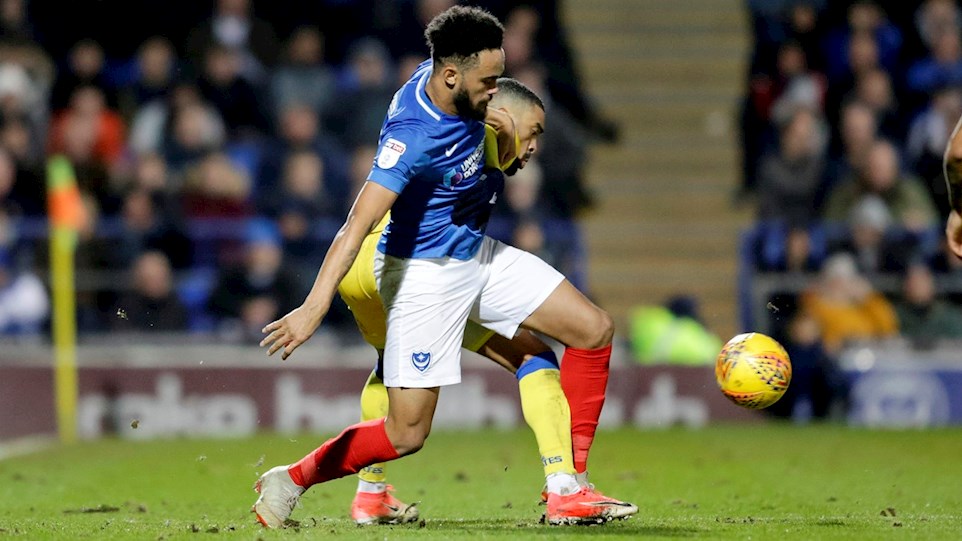 
Anton Walkes believes it was a case of two points dropped for Pompey against Bristol Rovers.

Pompey battled from behind against Bristol Rovers to draw for a fourth league game in succession.

A controversial penalty from Jonson Clarke-Harris saw the visitors lead at the interval, only for a James Clarke own-goal to level the contest.

The Pirates had the opportunity to leave the south coast with all three points, but a second Clarke-Harris spot-kick was fired high over the bar.

Kenny Jackett made three changes from the side that drew with Southend at the weekend.

Tom Naylor was immediately brought back after completing a two-match ban, while there were also returns for Ronan Curtis and skipper Gareth Evans.

Omar Bogle, Viv Solomon-Otabor and Bryn Morris all dropped to the bench, where they were joined by a fit-again Dion Donohue.

Pompey had a chance to score from an early free-kick, although Evans’ effort was not too troublesome for Jack Bonham between the sticks.

A long throw then caused problems at the other end, with James Clarke hurtling the ball into the box, where it eventually bounced into Craig MacGillivray’s arms.

Curtis soon sent a dangerous low delivery into the danger zone, although Evans could not make a clean connection.

But it was the Pirates who almost broke the deadlock when Naylor gifted possession to Alex Jakubiak on seven minutes.

He surged forward and hit a low shot that MacGillivray got down to, but the ball squirmed clear and Matt Clarke had to clear behind before Clarke-Harris could pounce.

After that energetic start, however, the contest soon settled down into a more laboured affair, with half-chances the order of the evening.

Curtis spun and hit a tame effort that Bonham easily dealt with after the lively Ben Close had headed the ball into the mixer.

There were gaps around the ground when Curtis collected Oli Hawkins’ pass and lifted a shot against the inside of the post, although the linesman’s flag was raised for offside.

Instead it was the visitors who took the lead from the penalty spot on 37 minutes, although it was a controversial decision.

There did not seem to be much of a challenge from Naylor on Clarke-Harris, but referee Neil Hair pointed to the spot and the striker picked himself up to slam the ball home.

Jackett made a change at the start of the second half, with Bogle replacing Hawkins as the focal point of Pompey’s attack.

Hair was continuing to make an enemy of the Fratton faithful once the action restarted, with a couple of decisions that went against the hosts.

Bristol Rovers had an opportunity to double their lead when Jakubiak spotted Liam Sercombe inside the area, but the midfielder’s wild effort went out for a throw.

Clarke-Harris then hit a fierce low drive that MacGillivray got his whole body behind in order to make the save.

But the Blues were level just before the hour mark, as Curtis clipped the ball into the box and – under pressure from Bogle – James CLARKE turned the ball into his own net.

That man Clarke was in the action again soon after, however, going down under Jamal Lowe’s challenge and winning another penalty.

It was Clarke-Harris who stepped up to take it once more, but this time blazed his shot high into the Fratton End.

Jackett immediately made his second switch of the night, with James Vaughan adding fresh legs to the forward line and Evans making way.

And his third and final change arrived on 79 minutes, as January arrival Solomon-Otabor came on for Lowe.

There were chances at both ends in the closing stages, with Lee Brown unable to make a connection when Curtis’ shot was deflected into his path.

Rovers substitute Gavin Reilly then sent the ball into the Blues box and Christian Burgess had to clear over his own bar.

But, despite five minutes being added for stoppages and the Fratton faithful roaring their side on, neither team was able to find a late winner.


View the photos from the Blues' latest League One stalemate


Anton Walkes believes it was a case of two points dropped for Pompey against Bristol Rovers.