It has been a busy week at Fratton Park, with four new players arriving before the transfer window closed.

Now the attention switches back to what is happening on the pitch, with Doncaster visiting the south coast on Saturday.

Pompey have lost their past three league fixtures, despite enjoying positive results in both the FA Cup and Checkatrade Trophy during that time.

It has seen them been overhauled by Luton at the top of the table, with Barnsley, Charlton and Sunderland now breathing down their neck.

Their visitors are slightly further back in seventh spot and have collected a single point from their two most recent third tier fixtures.

But Rovers have also enjoyed FA Cup success and last week’s victory over Oldham means that Crystal Palace will be travelling to the Keepmoat Stadium for a fifth round tie.

Grant McCann’s men have won six and lost six of their 14 away league games this term and are three points outside the play-off positions.

The two most recent meetings between the teams have ended all square and with an outfield player in goal.

Kal Naismith went between the sticks following Stephen Henderson’s injury last season, while Ben Whiteman donned the gloves back in August when Marko Marosi was sent off.

Oli Hawkins and Nathan Thompson are both back in contention, but Andy Cannon (quad) and Luke McGee (wrist) are injured, while there is a doubt over Bryn Morris (ankle).

Andy Butler is available for the visitors following a ban, but Niall Mason has been suspended by the club.

TICKETS
Most of the remaining seats are located in the Milton End and can be bought online here, with supporters able to take advantage of advance ticket pricing.

Subject to availability, tickets can be bought from either ticket office from 9am on the day of the game. 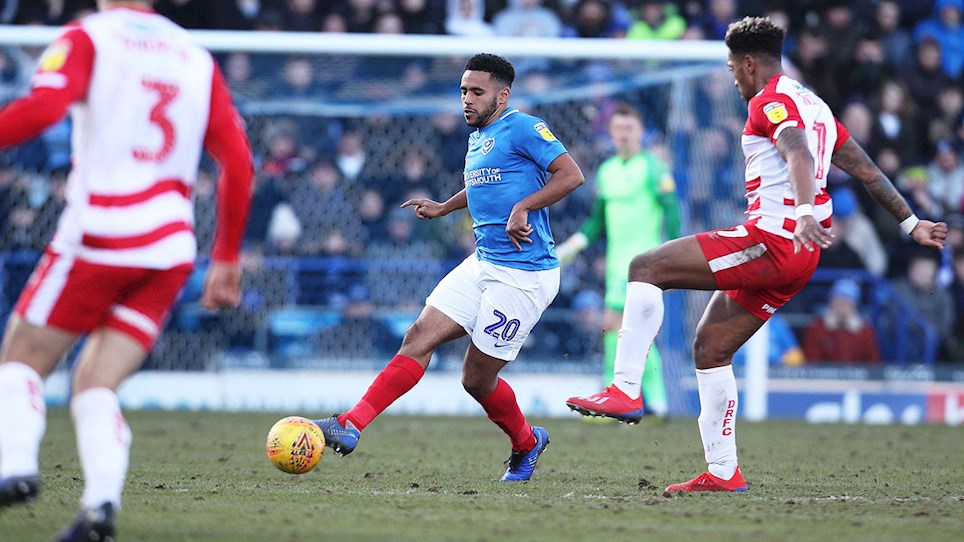 
A hamstring injury had kept him sidelined since Boxing Day. 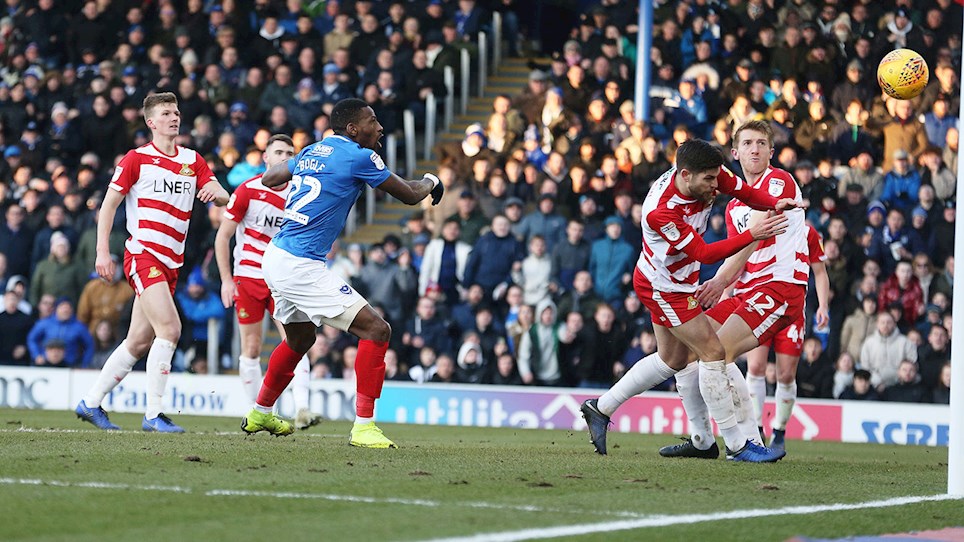 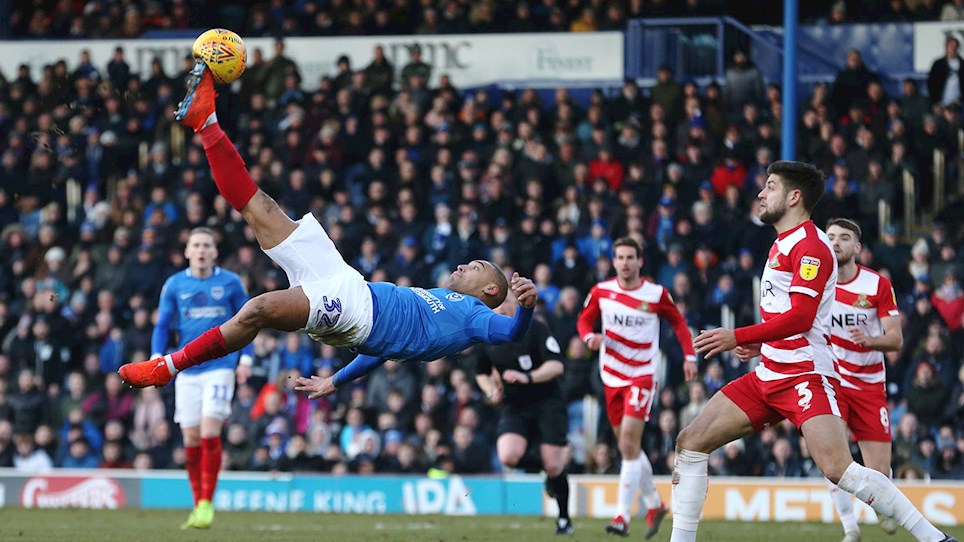 
View the photo gallery from a Fratton Park draw 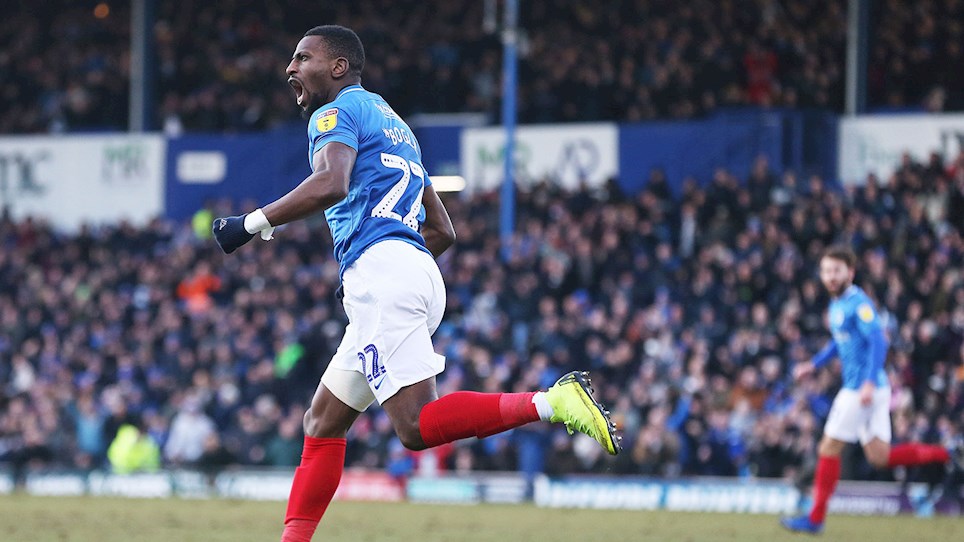 
Omar Bogle has certainly made an impressive start to his Pompey career.

Omar Bogle scored on his Fratton debut as Pompey fought from behind to draw 1-1 with Doncaster on a chilly afternoon on the south coast.

They trailed at the break to Mallik Wilks’ finish, despite controlling the opening stages and recovered from a sloppy period to get a foothold back in the contest.

Bogle struck in the second half to return the Blues to level terms, but the hosts were unable to find the target again.

It ended a three-match losing run in League One, but saw Pompey drop out of the automatic promotion places.

Kenny Jackett made four changes from the side that were narrowly beaten by Luton earlier in the week.

Omar Bogle was promoted to the starting 11, having impressed after coming off the bench at Kenilworth Road.

There were also starts for Ben Close, Dion Donohue and a fit-again Nathan Thompson, with Bryn Morris suffering from an ankle injury.

Anton Walkes and Brett Pitman dropped out of the matchday squad, with Gareth Evans on the bench, meaning Tom Naylor took the captain’s armband.

The hosts started brightly and controlled possession in the opening stages, without managing to test Rovers keeper Marko Marosi.

Thompson was understandably a bit rusty after a spell on the sidelines, however, and was booked for an early foul on Wilks.

Ronan Curtis was sending some dangerous balls into the box from wide on the left, but Doncaster were holding firm.

It looked like Bogle might break the deadlock when Donohue swung a corner towards the far post, but the striker failed to make a clean connection from just a few yards out.

He managed a more powerful header from a Naylor delivery moments later, only for Marosi to cling on to the ball.

The hosts were then dealt a blow on 28 minutes when they were forced to make their first substitution.

Whatmough appeared to hurt his knee and after a brief period of treatment, was replaced by Christian Burgess, although managed to walk off the pitch unaided.

And Doncaster immediately made the most of any uncertainty that change had to the Blues back-line.

Wilks raced on to a long pass from Ben Whiteman, getting past Burgess and slotting a neat finish past Craig MacGillivray.

That left Pompey reeling and they were sloppy for the next 10 minutes, with the visitors looking to take advantage.

But Jackett’s side slowly started to find their footing again and began to look more dangerous as the interval approached.

Donohue whipped a superb corner into a packed box in stoppage-time and Marosi did well to flap the ball away.

A free-kick from Curtis was then not properly dealt with and a long-range attempt from Donohue was not too far off target.

Donohue appeared to be limping as he came off for break and the midfielder did not emerge for the second half, with James Vaughan coming on for his debut.

It was the visitors who were first to threaten following the restart, though, with Danny Andrew flashing an angled drive narrowly wide.

Pompey were seeing plenty of the ball as they searched for a leveller, but struggling to breach an organised Rovers defence.

But there was a mix-up between Marosi and centre-back Paul Downing that allowed the hosts to level on 54 minutes.

They got in each other's way when trying to deal with Curtis’ ball in from the left and Vaughan’s pass was deflected into the path of BOGLE, who fired home from close range.

Vaughan then tried his luck with an acrobatic overhead effort from Lee Brown’s cross, although the ball sailed over the bar.

It had been a quiet afternoon for Jamal Lowe, but he saw a shot deflected past the post after showing neat footwork to break into the box.

Doncaster were not merely content with a point, however, and a shot from Alfie May sailed over, while Thompson made a superb recovery challenge to deny Matty Blair.

Former Fratton loanee John Marquis then hit skidding low shot from outside the box that MacGillivray got his fingertips to.

But the Blues immediately had a chance at the other end when Lowe’s fine long pass set Curtis clear, only for Marosi to just about get there first.

And Close then hit a fierce first-time shot from the edge of the area that the Rovers keeper did well to tip over the bar.

Jackett made his final substitution on 77 minutes, as Evans came on for Bogle to add some fresh legs to the forward line.

Headers from Burgess and Curtis could not beat Marosi as the Blues tried their best to find another goal.

And Doncaster almost snatched a winner in stoppage-time when Matt Clarke gave away possession, but MacGillivray came to the rescue by saving May’s curling strike.


A hamstring injury had kept him sidelined since Boxing Day.


View the photo gallery from a Fratton Park draw


Omar Bogle has certainly made an impressive start to his Pompey career.