Pompey and Southend meet for the third time in a little over two months on Saturday (12.30pm kick-off).

And visiting fans will be hoping for more of the same following a couple of 2-0 victories in those previous meetings.

The first was in the league at Fratton Park before Christmas, while last month’s Roots Hall clash saw the Blues progress in the Checkatrade Trophy.

There will be a few more eyes on the latest contest, however, which is being broadcast live on Sky Sports.

Pompey are looking to claim all three points for the first time since AFC Wimbledon were beaten on New Year’s Day.

Their opponents are currently sitting 14th in the table and only six points clear of the drop zone after 32 games.

Chris Powell’s men have lost their past four games on home soil and suffered a 3-0 defeat at Doncaster in their most recent outing.

Pompey will be hoping for a faster start than their last trip to Roots Hall in the league almost exactly 12 months earlier.

They found themselves two goals behind with just 12 minutes on the clock and were eventually beaten 3-1.

TEAM NEWS
Andy Cannon (quad), Luke McGee (wrist) and Jack Whatmough (knee) are all missing for Pompey, while there is a doubt over Dion Donohue (ankle).

VIEW FROM THE DRESSING ROOM
Read the thoughts of Kenny Jackett and Bryn Morris or register for a free iFollow account to watch the below videos.

TICKETS
Pompey fans can buy tickets until 3pm this afternoon. Please note that there will be no sales on the day of the game.

MATCH COVERAGE
Domestic iFollow subscribers can listen to live commentary from Andy Moon and Guy Whittingham by signing into their account and visiting the match centre from 12pm on Saturday.

BETTING
Pompey are the 19/20 favourites with Sky Bet to secure all three points, while the hosts can be backed at 14/5.

Brown: We Need To Build Momentum


Throwing away a three-goal lead is not an experience that Lee Brown is in a hurry to relive. 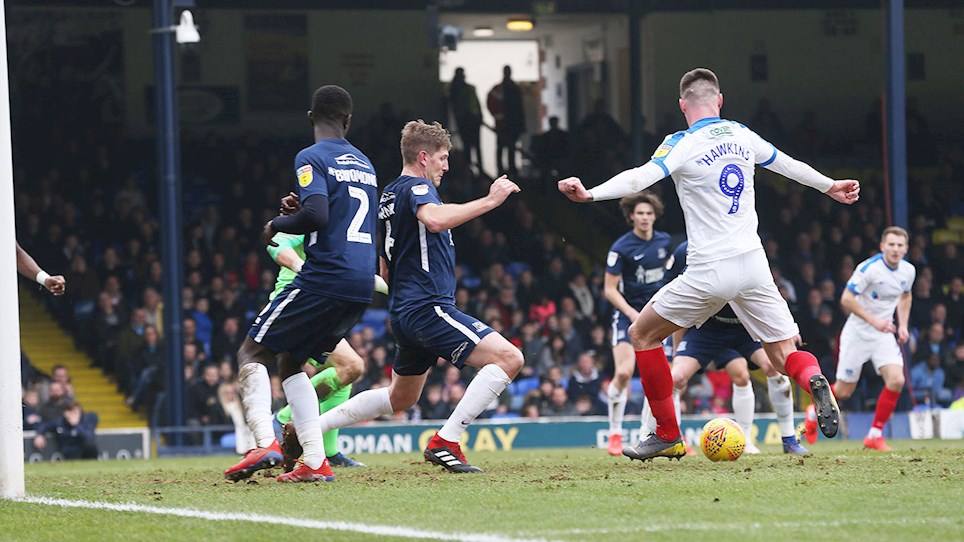 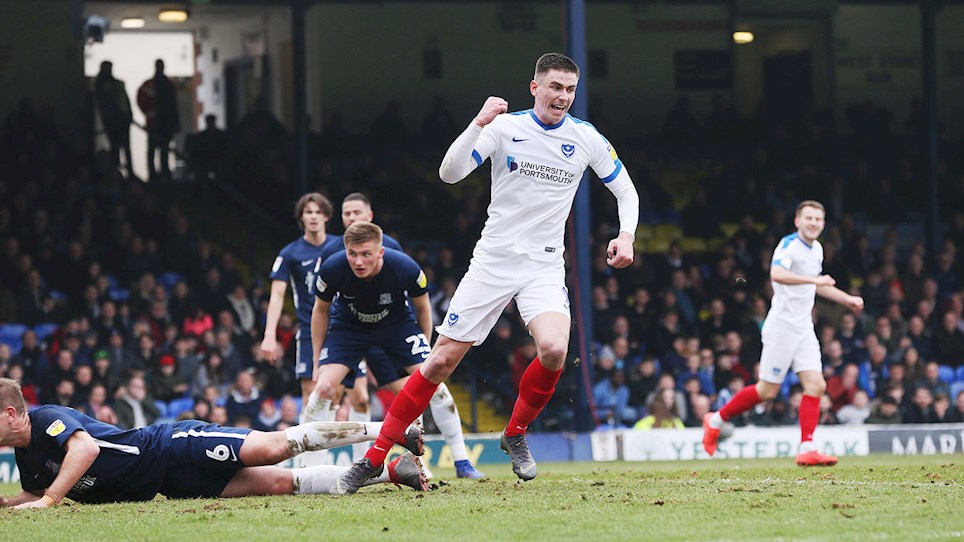 
View the photos from a dramatic draw for the Blues Jackett: We Should Have Seen It Out


Pompey were cruising towards victory with a dominant first half display at Southend.

Pompey moved back up to third in the League One table with a 3-3 draw against Southend.

But the visitors were in no mood to celebrate after throwing away a three-goal advantage at Roots Hall.

Bryn Morris, Ben Close – on his 100th appearance for the club – and Oli Hawkins all found the target as the Blues cruised into a commanding advantage.

Simon Cox reduced the deficit before the break, however, then added a penalty before completing his treble late on.

Kenny Jackett made three changes from the side that drew at Plymouth the previous weekend.

Viv Solomon-Otabor was handed his debut wide on the left, while Hawkins and Anton Walkes both returned to the starting line-up.

That meant a switch to a 4-4-2 system with Hawkins partnering Omar Bogle, as Matt Clarke claimed the captain’s armband.

Gareth Evans and Ronan Curtis both dropped the bench, while Nathan Thompson missed out with a knock.

There was a minute’s applause ahead of kick-off in memory of World Cup-winning goalkeeper Gordon Banks, who passed away earlier in the week.

It was the hosts who had the first effort, but Craig MacGillivray got down to his right to keep out Stephen McLaughlin’s low drive.

Christian Burgess then cleared the danger before Michael Turner could capitalise after Cox’s initial effort had been blocked.

But the Blues soon took control and broke the deadlock on eight minutes, as MORRIS opened his account for the club.

Bogle and Jamal Lowe combined well down the right and when the latter’s cross was pushed out by Nathan Bishop, the midfielder hammered the loose ball into the roof of the net.

They came close to doubling the lead from a corner soon after, with Clarke’s shot blocked and Burgess’ follow-up nervously dealt with by Bishop.

The visitors were well on top, although MacGillivray spilled an effort from Sam Mantom and dived on the loose ball before Michael Kightly could pounce.

And Pompey immediately went up the other end to strengthen their advantage, although the Shrimpers could have dealt with it.

Solomon-Otabor combined well with Lowe, but first Sam Hart and then Mantom made a hash of their clearances and CLOSE sent a neat volley into the bottom corner from the edge of the box.

It looked like they had gone even further ahead when Bogle managed to force the ball over the line, although it was controversially ruled out for offside.

But they did have a third goal on 31 minutes when, at the end of a neat passing move, Morris struck the post.

This time it was Taylor Moore’s chance to decline the opportunity to clear the ball and a grateful HAWKINS slotted home.

Southend looked out of the contest, but gave themselves a lifeline when Cox rose in the box to convert Hart’s delivery.

They almost grabbed another before the break when a corner fell for Turner, who curled his shot just past the post.

The visitors began the second period brightly and a snap-shot from Bogle was saved by Bishop, while a heavy first touch from Lowe allowed the Southend keeper to claim the ball.

But Burgess then made a key challenge inside the box to stop Kightly collecting MacLaughlin’s pass following a quick break.

Pompey immediately created an opening of their own, but Bishop kept out Bogle’s effort and then beat the striker to the loose ball.

It was not as action-packed since the restart, however, and the chances started to dry up as the half progressed.

McLaughlin did try his luck from outside the box, but the ball struck Clarke to divert it wide of the post.

A couple of corners for the hosts also caused problems, although MacGillivray was on hand to deal with them on each occasion.

Solomon-Otabor had faded slightly following a lively start to the contest and was replaced by Curtis on 71 minutes.

And Jackett soon made a second substitution, with Bogle the man to make way as Evans provided fresh legs to the forward line.

The game seemed to be drifting towards a conclusion, but Southend were not done yet and set up a tense finale by pulling another goal back.

Morris caught Kightly in the box and referee Dean Whitestone pointed to the spot, with Cox stepping up to send MacGillivray the wrong way.

Pompey were not just sitting back, though, and Close had a low effort blocked following some patient build-up play.

But Southend completed a remarkable comeback on 88 minutes, as Cox raced onto Timothee Dieng’s fine pass and neatly tucked away his hat-trick goal.

James Vaughan was brought on as the Blues tried to hit back, but they were unable to find another goal before the final whistle blew.

Brown: We Need To Build Momentum


Throwing away a three-goal lead is not an experience that Lee Brown is in a hurry to relive.


View the photos from a dramatic draw for the Blues

Jackett: We Should Have Seen It Out


Pompey were cruising towards victory with a dominant first half display at Southend.

But Blues fans need to secure their seat in advance, as they will not be on sale from Roots Hall on the day of the game.

Pompey supporters have already snapped up more than 1,200 tickets for the contest, which is being televised live on Sky Sports.

They can be bought online here, by calling 0345 646 1898 or in person from the Anson Road ticket office until 3pm on Friday.

Supporters needing to collect tickets at Southend should visit the away turnstiles on Fairfax Drive.

Wheelchair and ambulant tickets are priced £14 and include a carer if on the highest rate of DLA or PIP.

Members of the emergency services can also purchase tickets for £14 with valid ID.

Any supporter expecting tickets in the post should contact the Pompey ticket office by 4pm on Friday if they have not arrived. We will not be able to help fans who contact us on the day of the game.


Please note that this game will be rearranged should Pompey reach the fifth round of the Emirates FA Cup.