The top two in League One meet in a blockbuster encounter at Kenilworth Road this evening (7.45pm kick-off).

Luton snatched top spot from Pompey’s grasp at the weekend, beating Southend while the Blues were in FA Cup action.

And Kenny Jackett’s side will aim to climb back to the summit by doing what no other side has managed this season.

The Hatters have yet to be beaten on home soil in the league this term, dropping just six points from 14 games.

No side comes close to the 35 goals scored on their own patch, while Barnsley are the only team to equal the nine goals they have conceded.

But Pompey can point to having the best away record in the division, with 30 points already collected on the road.

Luton do not appear to have suffered from the departure of manager Nathan Jones to Stoke earlier this month, with temporary boss Mick Harford yet to experience a league loss.

The Blues were beaten 1-0 when they visited Kenilworth Road for an FA Cup tie last term, although were 3-1 victors for a fourth tier clash the previous season.

It was Pompey who came out on top when the sides faced off at Fratton Park on the opening day of the current campaign, with Jamal Lowe netting the only goal of the game.

TEAM NEWS
Pompey are waiting on international clearance to see whether loan signing Omar Bogle can make his debut.

Jamal Lowe returns from suspension, but Luke McGee (wrist) is injured and the game will likely come too soon for the fit-again pair of Oli Hawkins and Nathan Thompson.

Danny Hylton is unavailable for the hosts as he completes a four-match ban, while Glen Rea (knee) is injured and there are doubts over Harry Cornick (ankle) and Elliot Lee (hamstring).

VIEW FROM THE DRESSING ROOM
Read the thoughts of Joe Gallen and Gareth Evans or register for a free iFollow account to watch the below video.

TICKETS
Pompey have sold their full allocation of tickets and no more will be available to buy at the ground.

Supporters collecting tickets at Kenilworth Road this evening can do so from the Oak Road turnstiles.

Click here to read a guide to the stadium for away fans.

BETTING
Luton are the 6/5 favourites with Sky Bet to secure all three points, while the visitors can be backed at 23/10. 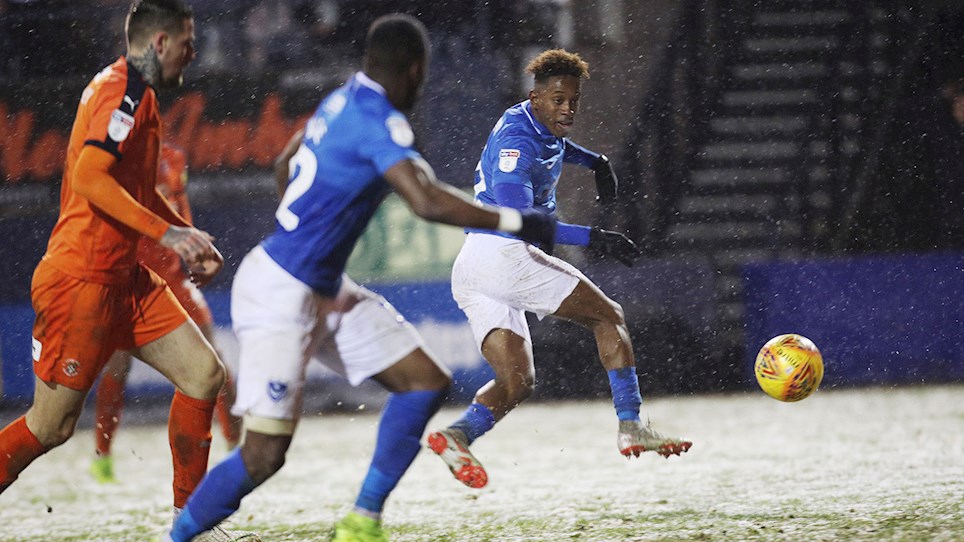 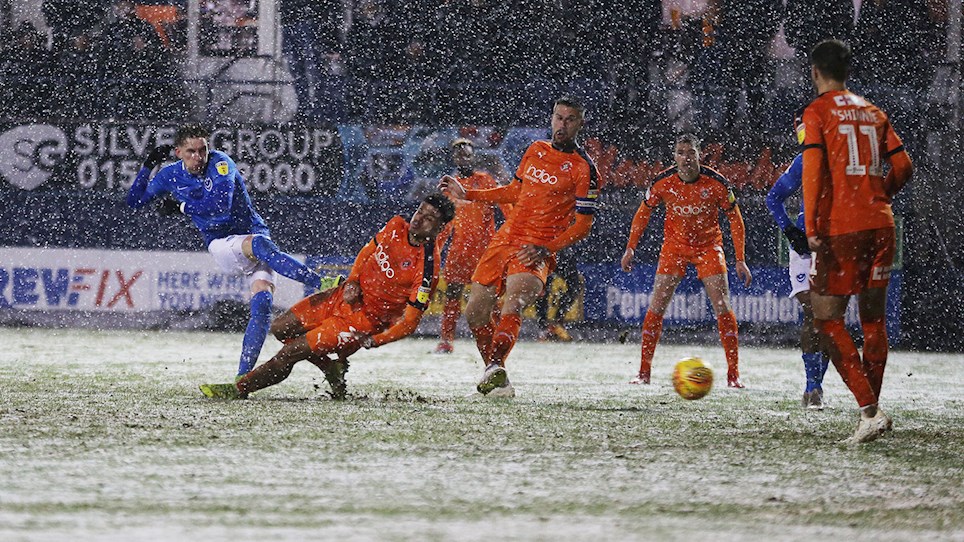 
View the photos from a narrow loss at Kenilworth Road 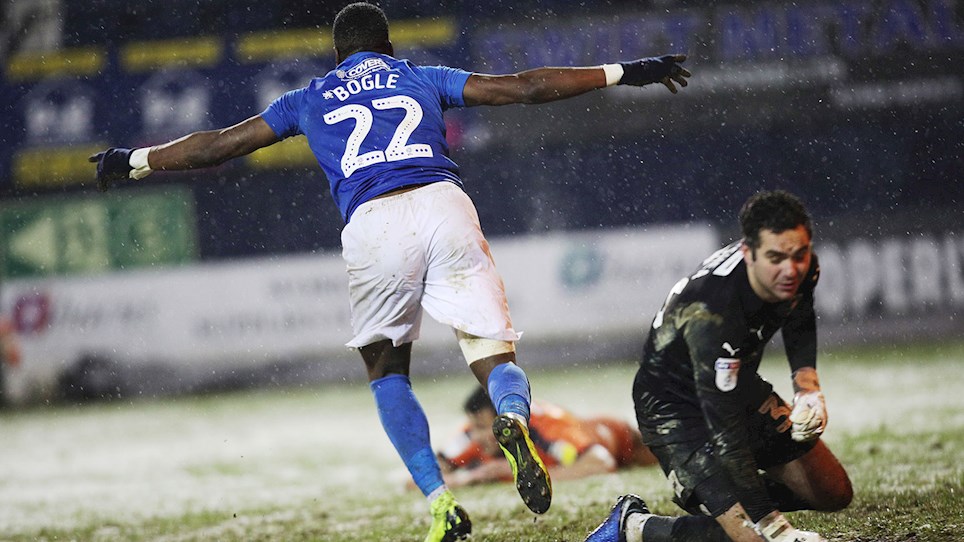 
It was a debut full of promise, even if it failed to spare Pompey from defeat. 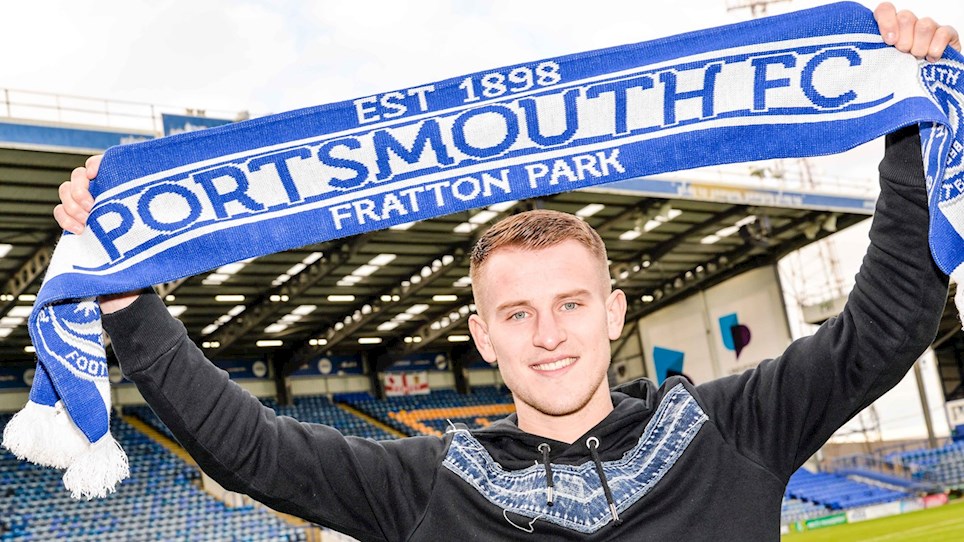 Pompey twice fought from behind, but a late goal saw them leave League One leaders Luton empty-handed.

They were comfortably second best before the break and James Collins ensured the hosts went in ahead at the interval.

It was a different story in the second half, however, and the Blues dominated for long periods, with Ronan Curtis levelling.

Collins netted from the penalty spot to restore the Hatters’ lead, only for substitute Omar Bogle to equalise on his debut.

Both sides looked capable of grabbing a late winner, but it was George Moncur who struck in the closing stages to strengthen Luton’s advantage at the summit.

Kenny Jackett made two changes from the side that drew with Queens Park Rangers in the FA Cup at the weekend.

Bryn Morris was handed a debut in the centre of midfield, while Jamal Lowe made an instant return after completing a one-match ban.

Dion Donohue and Louis Dennis dropped to the bench, where they were joined by recent loan signing Bogle.

There was also a change of formation, with Anton Walkes moving into the centre of a three-man defence, as Lee Brown and Jamal Lowe were used as wing-backs.

The snow fell persistently throughout the contest, although it was not heavy enough to leave more than a dusting on the surface.

It was the hosts who started on the front foot and it continued that way for most of the opening 45 minutes.

There were plenty of dangerous balls delivered into the Pompey box, although the majority were dealt with.

Craig MacGillivray kept out a long-range effort from James Justin, who had earlier seen his corner headed away by Brett Pitman.

Luke Berry then sent a dangerous low ball across the face of goal, but a sliding Collins could not shake off Matt Clarke to convert.

Luton were well on top of and after a spell of intense pressure, LuaLua’s angled drive was kept out by MacGillivray.

Berry was next to try his luck, with a shot from outside the box that fizzed narrowly past the post midway through the half.

The hosts went close again on 29 minutes, as Jack Stacey swung in a dangerous cross that Berry glanced just wide.

Pompey were not creating much at the other end, although a flick from Pitman found Curtis, who was crowded out before he could get a shot away.

The action was soon back down the other end of the pitch, however, and Alan McCormack’s attempt was just off target, while a heavy touch from LuaLua allowed MacGillivray to save.

But Luton finally made their pressure count on 39 minutes, as Collins collected LuaLua’s pass and neatly slotted home.

Pompey’s first shot came just before the break, although Gareth Evans slipped as he connected with the ball, which sailed over the bar.

Jackett made a double change at the start of the second half, with Bogle and Donohue replacing Pitman and Evans.

And the latter made an immediate impression with the visitors’ first shot on target, although James Shea was not overly troubled.

Bogle was also proving to be a real handful, using his strength to steal possession on a couple of occasions.

Pompey looked a different team than the one that had struggled to keep hold of the ball before the break.

And they found themselves back on level terms on 52 minutes, with Clarke getting into the box and Lowe teeing-up CURTIS to drill into the net.

They might have had another moments later when Lowe found Morris, whose fierce effort was tipped over by Shea.

The Blues were applying plenty of pressure and the ball had to be hacked clear when Shea parried clear an angled drive from Curtis.

Luton had a chance to retake the lead on 71 minutes, however, as a cleanly-struck effort from Justin was pushed over by MacGillivray.

But they were back ahead soon after, when referee Simon Hooper decided that Whatmough had brought down LuaLua in the box.

He pointed straight to the spot and Collins sent up to confidently fire the ball right into the bottom corner.

That only served to reinvigorate the visitors, though, and they were deservedly level when Lowe slipped a pass across for BOGLE to bundle home.

He came close to adding another soon after, but Shea managed to get down to his left to push the ball behind.

But there was late heartache as the game swung back in Luton’s favour following a disputed foul on Moncur by Walkes just outside the box.

It was Moncur who took the free-kick and he expertly bent a shot around the wall and into the net to seal victory for the hosts.


View the photos from a narrow loss at Kenilworth Road


It was a debut full of promise, even if it failed to spare Pompey from defeat.

Any supporters who have yet to receive tickets for next week’s League One visit to Luton should note that there was a batch not sent out in the post.

Due to a high demand for FA Cup tickets, there was insufficient time to process all deliveries to guarantee they would arrive in time.

Supporters who have not received Luton tickets in the post will be able to collect them from Fratton Park main reception between 9am and 6pm on Saturday.

Any that remain uncollected can be picked up at the Oak Road turnstiles at Kenilworth Road on the evening of the game.

Portsmouth Football Club would like to apologise for any inconvenience this may cause and thank you for your continued support. 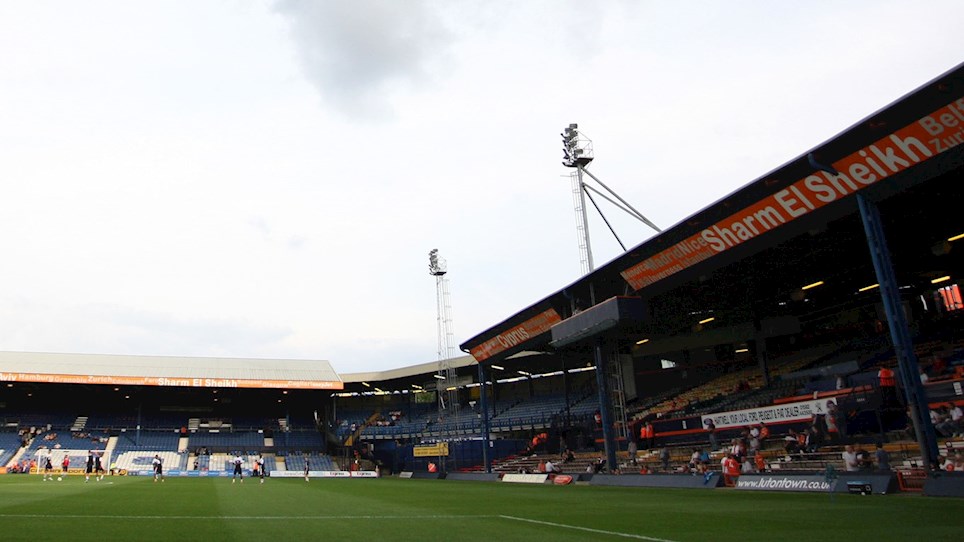 
Pompey have sold their full allocation of tickets for the midweek visit to Luton.