Pompey will look to recover from just their fourth league loss of the season when they visit Oxford on Saturday.

They still enjoy a four-point lead at League One summit, with nearest rivals Luton and Sunderland sharing the points last weekend.

The Blues’ next opponents are also desperate to accumulate points – although for a very different reason.

Karl Robinson’s men are currently sitting inside the drop zone, but are only a single point behind the safety line.

United have failed to win any of their past five league fixtures – a run that included three successive defeats before a 2-2 draw at Fleetwood in their most recent outing.

Their FA Cup and Carabao Cup campaigns both ended at the third round, going out to Brentford and Manchester City respectively.

But Oxford have – like Pompey – reached the quarter-finals of the Checkatrade Trophy, seeing off Cheltenham on penalties to set up next week’s clash with Bury.

The Blues eased to a 4-1 victory when the sides met on the south coast back in August, despite Gareth Evans having a penalty saved.

He redeemed himself by netting after the break, however, and Jamal Lowe added a brace, while Rob Dickie found his own net.

TEAM NEWS
Lee Brown and Ben Close are both back in contention for Pompey, while Bryn Morris could make his debut after signing from Shrewsbury.

But Andre Green has been recalled from his loan spell by Aston Villa and the Blues are still missing Oli Hawkins (calf), Luke McGee (wrist) and Nathan Thompson (hamstring).

Shandon Baptiste, Rob Hall and Jon Obika all have long-term injuries for the hosts, with former Pompey winger Ricky Holmes (back) also out and Jamie Hanson (ankle) a doubt.

TICKETS
Pompey have sold their full allocation of tickets and no more will be available to buy on the day of the game.

Fans travelling to the game can click here for a guide to the stadium.

BETTING
Pompey are the 13/10 favourites with Sky Bet to secure all three points, while the visitors can be backed at 21/10. 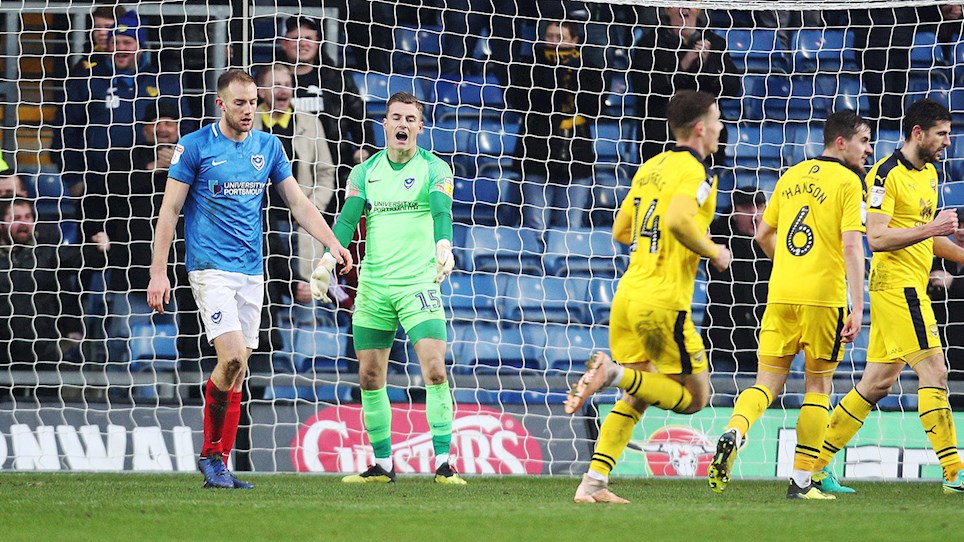 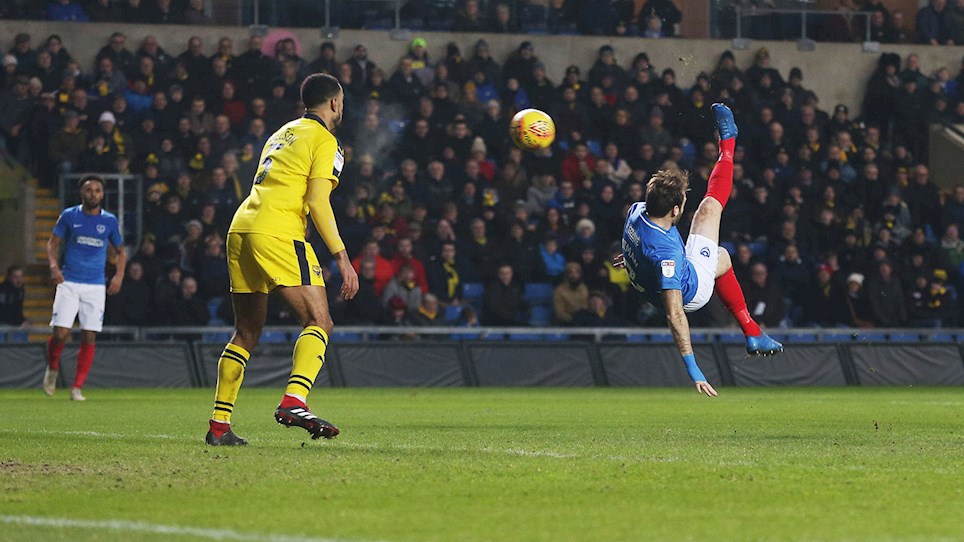 
View the photos from the Blues' defeat at the Kassam Stadium


Successive defeats to Blackpool and Oxford have halted Pompey’s momentum. Jackett: Work To Do At Both Ends


Kenny Jackett knows there is plenty for Pompey to work on following defeat to Oxford.

Pompey lost 2-1 at Oxford to ensure they suffered back-to-back defeats for the first time this season.

Goals from Cameron Brannagan and James Henry meant the hosts enjoyed a comfortable lead at the interval.

The Blues were well below par, but Brett Pitman came on to spark hopes of a comeback with a fine finish.

Those 1,803 travelling fans were not given a result their backing deserved, however, as United held on for the points.

Kenny Jackett made three changes from the side that were beaten by Blackpool on home soil the previous week.

One was enforced, with Andre Green being recalled from his loan spell by Aston Villa, while Dion Donohue and Pitman dropped to the bench.

A fit-again Lee Brown returned at left-back, Andy Cannon was handed his full debut and David Wheeler also got a rare league start.

It meant that Jamal Lowe led the line for Pompey and skipper Gareth Evans moved into a more advanced role.

Matt Clarke’s appearance in the side brought up 150 appearances for the defender, but new signing Bryn Morris had to be content with a spot among the substitutes.

The visitors started brightly and won an early corner that was dealt with, while a similar set-piece at the other end was nodded wide by Rob Dickie.

A deep free-kick from Brown then caused problems in the United defence, who were eventually able to scramble the ball to safety.

There were not an abundance of opportunities, with both sides showcasing attacking intent, but unable to produce any meaningful shots.

A couple of set-pieces were comfortably dealt with by Craig MacGillivray, while Evans’ curler from the edge of the box was not too far off target.

But it was the hosts who broke the deadlock midway through the first half, although it might have been the Blues celebrating a goal.

Lowe could not quite charge the ball down following a slip from former Fratton keeper Simon Eastwood.

Instead his long clearance eventually made its way to Brannagan, who drilled a fine low shot right into the bottom corner.

Oxford might have doubled their lead soon after, as a corner led to a spot of pinball inside the Pompey box.

The visitors won a couple of their own soon after and Eastwood dropped the second, but grabbed the ball at the second attempt.

It became a niggly affair as the interval approached, but United were able to double their advantage on the stroke of half-time.

Jamie Mackie was unable to get a shot away and instead played the ball across for an unmarked Henry to lash home.

There were no substitutions for the Blues at the break, although Wheeler and Lowe swapped positions.

And the former had a chance to reduce the deficit moments after the restart, meeting Evans’ free-kick and sending a header just off target.

But it was still Oxford looking more likely to add to the scoring and an effort from Mackie flew narrowly over.

Then, after a Lowe strike had been comfortably dealt with by Eastwood, the hosts had two more chances to put the result beyond doubt.

First, a cross from Jordan Graham was punched away by MacGillivray and Jamie Hanson’s follow-up was deflected off target by Clarke.

Gavin Whyte’s corner was then palmed clear by the Blues stopper and this time Brannagan’s attempt flew into the side netting.

With the visitors struggling to find any kind of fluency, Jackett made a double change just before the hour mark.

Wheeler and Evans were the men to make way, with Pitman and Louis Dennis coming on to replace them.

And it proved to be an inspired decision, as the duo combined to reduce Pompey’s deficit on 64 minutes.

Dennis provided the assist, crossing the ball for PITMAN to convert with an acrobatic overhead effort that left Eastwood helpless.

The Blues were struggling to build on that goal, however, and Cannon made way for Donohue in a final throw of the dice.

One patient move did lead to a chance on 81 minutes, although Lowe could not adjust his body enough to guide Brown’s delivery on target.

And despite producing plenty of effort in the closing stages, Oxford remained firm at the back to secure victory.


View the photos from the Blues' defeat at the Kassam Stadium


Successive defeats to Blackpool and Oxford have halted Pompey’s momentum.

Jackett: Work To Do At Both Ends


Kenny Jackett knows there is plenty for Pompey to work on following defeat to Oxford.

Pompey have sold their full allocation of tickets for the league visit to Oxford.

And they will be backed by 1,800 Blues fans, with every seat snapped up within 40 minutes of going on sale to season ticket holders and shareholders this morning. 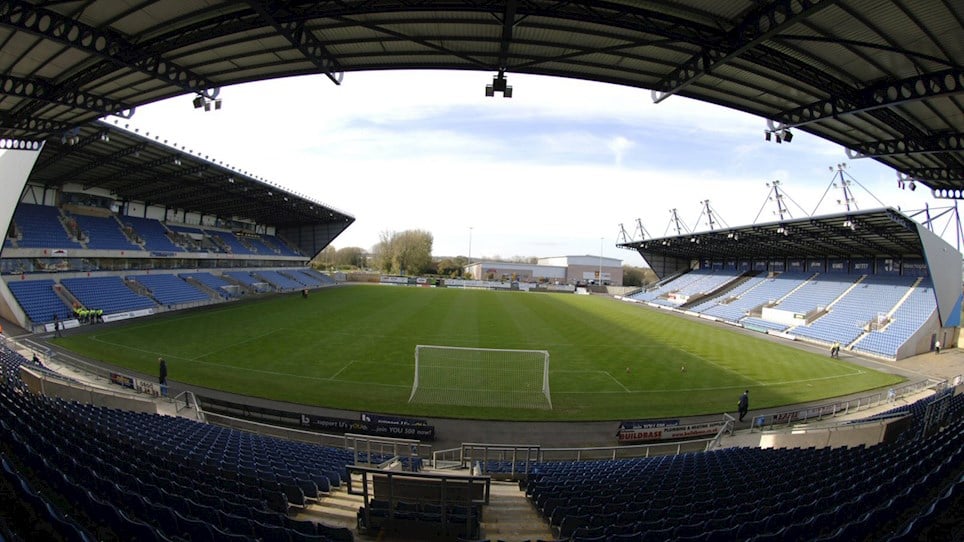 
Tickets for Pompey's League One game at Oxford go on sale next week.