Pompey fans can look back on an encouraging 2018 that saw them narrowly miss out on the play-offs before mounting an automatic promotion bid.

Now they will look to finish the job in the first half of 2019 – with AFC Wimbledon providing the first obstacle to overcome.

Kenny Jackett’s side ensured they would begin the new year at the League One summit, but have Luton breathing right down their necks.

Their next opponents are also desperate for points, as only Plymouth are currently keeping them off the foot of the table.

But the Dons have enjoyed a fruitful festive period that started with an away victory at Wycombe just before Christmas.

They followed that up by beating their relegation rivals from Devon on Boxing Day, then drew with Blackpool at the weekend.

It leaves Wally Downes’ men – who visit Fleetwood in the third round of the FA Cup on Saturday – sitting four points behind the safety mark.

The sides have already met twice this term, with Wimbledon winning 2-1 at Fratton Park in the Carabao Cup, while the Blues gained revenge by the same scoreline in the league at Kingsmeadow.

TEAM NEWS
Full-backs Lee Brown and Nathan Thompson are both sidelined with hamstring problems, while Luke McGee (wrist) is also out.

James Hanson (hip) and Deji Oshilaja (ankle) are doubts for the visitors, who are definitely missing Joe Pigott (thigh) and Scott Wagstaff (calf).

VIEW FROM THE DRESSING ROOM
“A big thing for us is putting on a performance of quality and passion that brings our supporters into play.

“AFC Wimbledon are under new management now and have had some positive results lately – there are no easy games in this division.”

Click here to read the full thoughts of Kenny Jackett ahead of Tuesday’s match.

TICKETS
There is extremely limited seating available in the Milton End. Click here to secure your seat.

MATCH COVERAGE
Domestic iFollow subscribers can listen to live commentary from Andy Moon and Guy Whittingham by signing into their account and visiting the match centre from 2pm on New Year’s Day.

BETTING
Pompey are the 8/15 favourites with Sky Bet to secure all three points, while the hosts can be backed at 5/1. 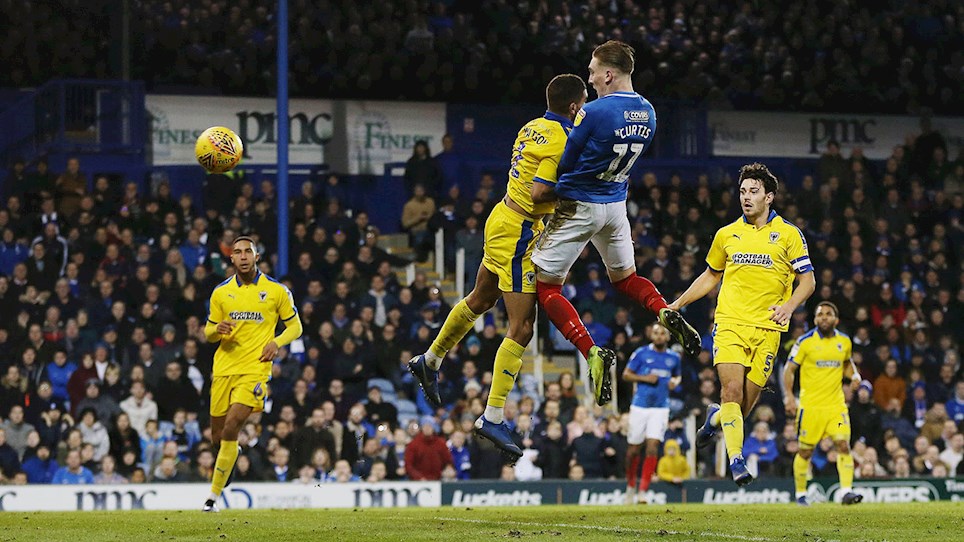 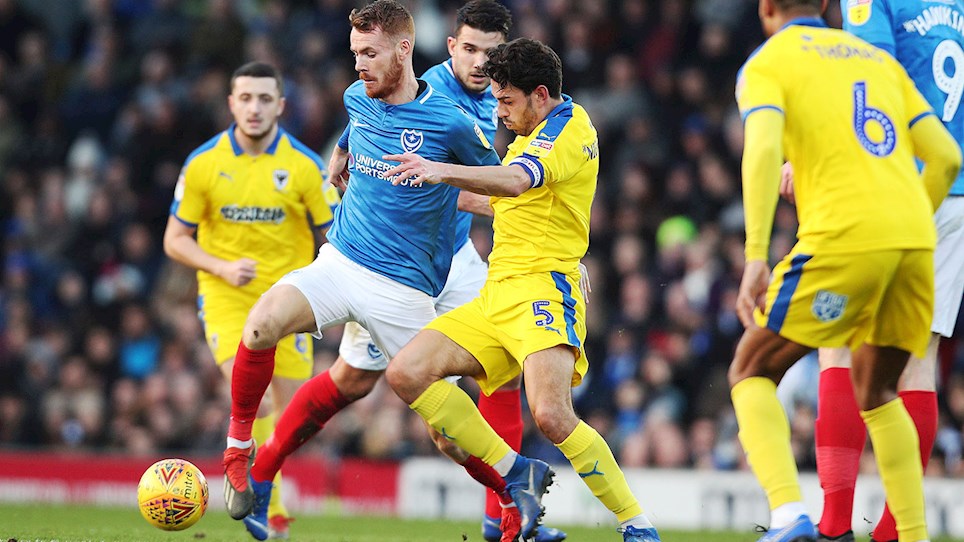 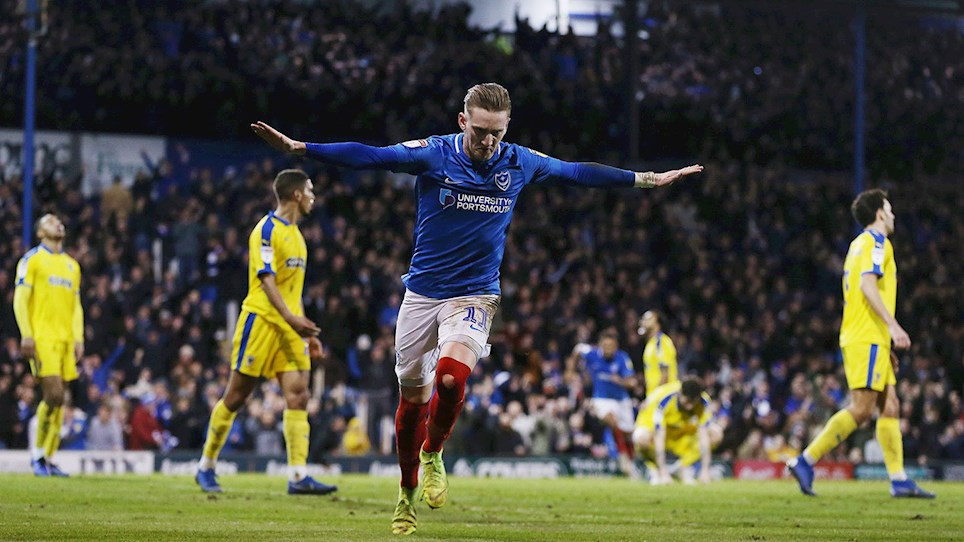 
View the photos from the Blues' latest League One success 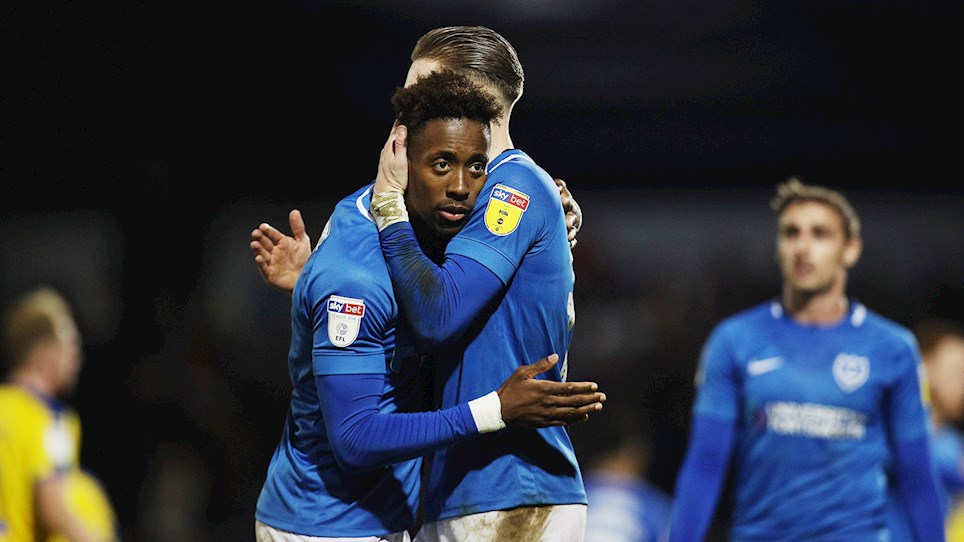 
Jamal Lowe has been vying with several other forwards for the title of Pompey’s top scorer in recent weeks.

Pompey began 2019 with victory at Fratton Park, but were made to work hard for the points by a struggling AFC Wimbledon side.

It looked like a comfortable afternoon might be on the cards for the league leaders when Jamal Lowe gave them an early lead.

But the hosts missed some decent chances to extend their lead and a stunning strike from Kwesi Appiah brought the Dons level.

That seemed to spark the Blues back into life, though, and Ronan Curtis soon headed them back in front to secure the win.

Kenny Jackett made three changes from the side that won convincingly at Fleetwood at the weekend.

Oli Hawkins recovered from an ankle problem to replace Brett Pitman up front, while Brandon Haunstrup came in for the injured Lee Brown at left-back.

The other switch saw Ben Close make way for Gareth Evans, who was rested for the final game of 2018 at Highbury.

There was a minute’s applause before kick-off in memory of former Pompey and Hampshire cricket star Mike Barnard, who sadly passed away before Christmas.

It was a quiet start to the contest, both on and off the pitch – with some New Year revelries perhaps explaining the muted atmosphere in the opening stages.

But the noise levels soon grew, as the hosts took the lead with the first proper chance of the game on eight minutes.

Curtis collected a cross-field pass from Anton Walkes and fired in a low shot that was saved by Tom King.

But the keeper could not keep hold of the ball and LOWE was quick to capitalise, dinking a neat finish into the net.

Pompey were dominating possession, but there was not an abundance on clear-cut opportunities to excite a sell-out crowd.

Ben Thompson wasted a decent opening, swiping at thing air after Walkes’ ball into the box had been laid off by Evans.

A couple of other dangerous moments from the hosts were ended by an offside flag, as the Dons struggled to find a foothold in the game.

Lowe was proving a particular nuisance and after showing some nifty footwork inside the box, saw his low shot saved by King.

His clever chipped pass into the box then had to be nodded away by Terell Thomas before Thompson could capitalise.

The visitors finally threatened just before the break when former Pompey winger Andy Barcham burst clear, but a superb Jack Whatmough challenge inside the box halted his progress.

It was still a fairly sedate affair once the action restarted and a wayward header from Mitch Pinnock was not going to trouble Craig MacGillivray.

Kwesi Appiah was then perhaps fortunate to avoid a booking following a late challenge on Matt Clarke, with the Blues defender quickly back up on his feet.

But the hosts should have doubled their lead on 54 minutes, as a fine Lowe pass sent Curtis through on goal, only for the Republic of Ireland international to drag his shot wide.

Curtis was soon back to his best, however, stealing possession and cutting the ball back for Evans, whose side-footed effort was kept out by King.

Wimbledon tried to make Pompey pay for those missed chances and suddenly enjoyed a spell of pressure.

But one strike from Anthony Hartigan flew high over the crossbar, while another was straight at MacGillivray.

It was the visitors on top, though, and Jackett made a double change on 69 minutes to try to negate their threat.

Evans and Hawkins were the men to make way, with Close and Pitman adding fresh legs to the midfield and forward line respectively.

But it was Lowe who had a chance to doubled the lead, only to head a Curtis cross wide from just a few yards out.

And the hosts were made to pay for their profligacy when Appiah unleashed a superb long-range strike that left MacGillivray helpless.

Thompson had a shot blocked as Pompey went back on the attack, while an effort from Curtis was comfortably dealt with by King.

But CURTIS did restore their lead moments later, rising above his man in the box to nod home a great cross from Thompson.

The Dons threw men forward in an attempt to equalise for a second time, but Pompey saw out the closing stages to start the year on a high.


View the photos from the Blues' latest League One success


Jamal Lowe has been vying with several other forwards for the title of Pompey’s top scorer in recent weeks.

Pompey will start 2019 in front of a full house at Fratton Park.

Tickets in the home areas have sold out for the New Year's Day clash with AFC Wimbledon, which kicks-off at 3pm.

Fans can still click here to secure their seat for all of the Blues' remaining home games this season.