Pompey will aim to continue their run in the Emirates FA Cup when they host QPR on Saturday (3pm kick-off).

It is the second round in succession that the Blues take on Championship opposition, following their dramatic victory at high-flying Norwich earlier this month.

The fourth round sees them on home soil, however, and facing a side currently sitting 14th in the second tier table.

Rangers have lost both league matches since beating Leeds 2-1 at Loftus Road to reach this stage of the competition.

Steve McClaren’s side suffered a heavy 4-1 home defeat to Preston last Saturday, with former Pompey loanee Jayden Stockley among the scorers for the visitors.

But they are still just seven points adrift of the play-off places, as they seek to improve on last term's 16th-place finish.

Pompey and QPR have – perhaps surprisingly – never previously met in the FA Cup and you have to go back to the 2010/11 campaign to find their most recent contests.

They played out a 1-1 draw at Fratton Park, with Liam Lawrence netting a penalty and getting dismissed in a game that saw both teams end with 10 men.

TEAM NEWS
Pompey will be without the suspended Jamal Lowe, while Andy Cannon, Matt Casey and Dan Smith are all cup-tied having featured for other clubs earlier in the competition.

Oli Hawkins (calf), Luke McGee (wrist) and Nathan Thompson (hamstring) are still injured and there is a doubt over Louis Dennis (knee).

TICKETS
There are a limited number of single seats still available for the tie, which can be bought online here or by visiting the Anson Road ticket office.

PARKING
The tie has been selected for featured highlights, meaning there will be a number of broadcast vehicles at the game.

This means there will be fewer than 100 car parking spaces available for fans behind the North Stand. They are priced £10 each and allocated on a first come, first served basis.

BETTING
Pompey are the 7/5 favourites with Sky Bet to secure all three points, while the visitors can be backed at 19/10.

It was John Aloisi with the dinked effort, @4AFMac with the header and Martin Phillips on target for the Blues' third goal to seal a fine victory 👌 pic.twitter.com/CcG6kFeUSc 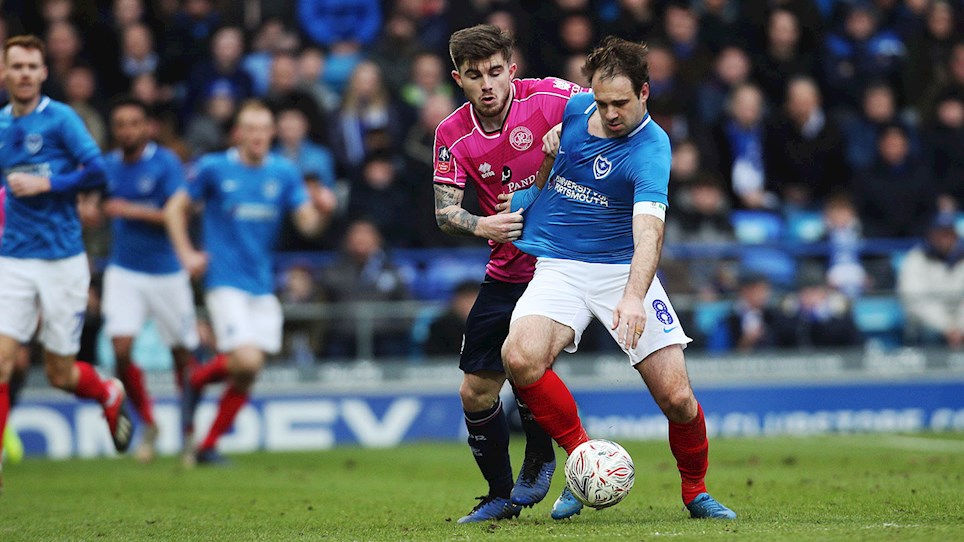 
Brett Pitman is hoping that Pompey will face Championship sides on a regular basis next season. 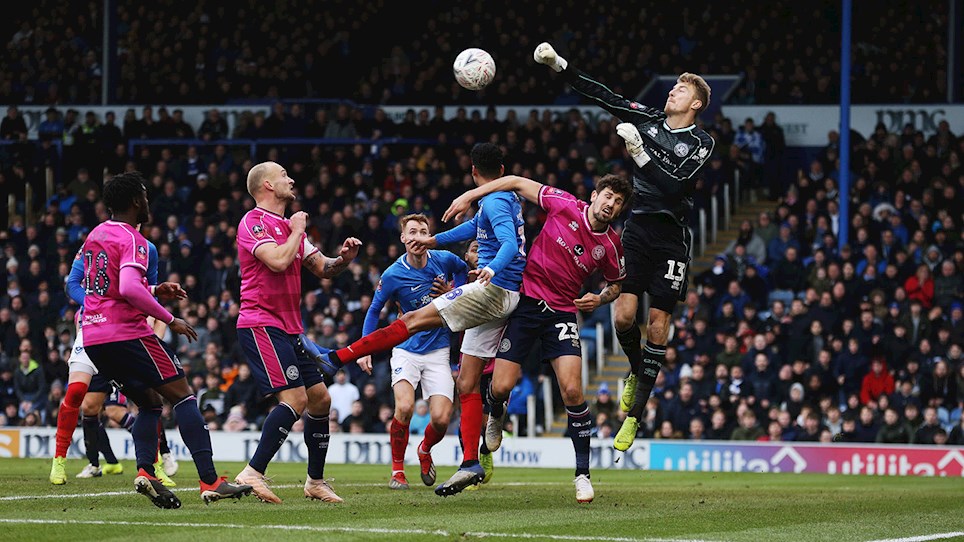 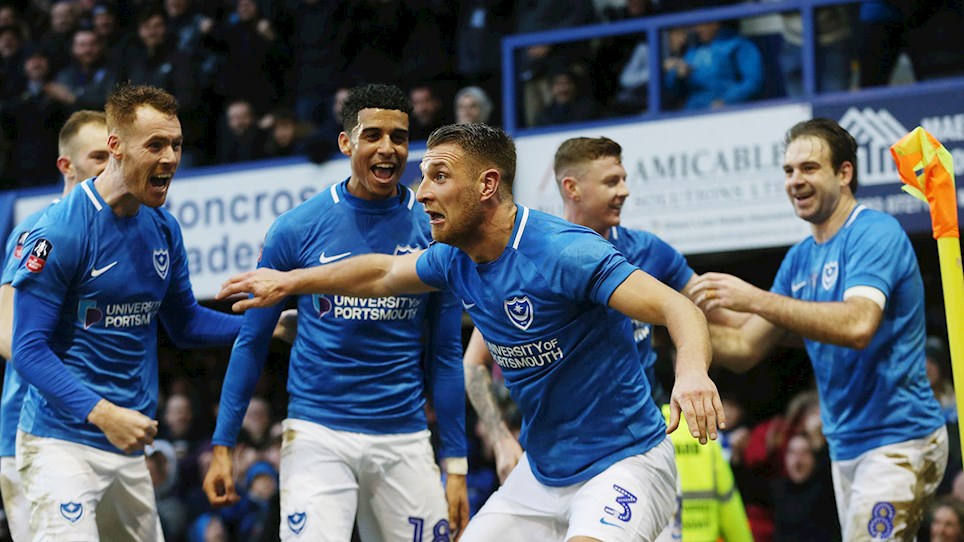 
View the photos from the fourth round contest

Brown: Replay Not A Problem


Lee Brown is not moaning about having to play an Emirates FA Cup replay against QPR.

Pompey will head to Loftus Road for an Emirates FA Cup fourth round replay following a 1-1 draw with QPR.

A full-blooded encounter was short on chances before the break, but exploded into life in the second half.

The hosts took the lead when Lee Brown’s cross was turned into his own net by the unfortunate Joel Lynch.

But Nahki Wells levelled for the Championship side, ensuring both teams would be in Monday evening’s draw for the fifth round.

Kenny Jackett made three changes from the side that were beaten at Oxford in the last league outing.

Jamal Lowe missed out through suspension and Andy Cannon was cup-tied, with David Wheeler having been recalled from his loan spell by the visitors.

A minute’s silence was held before kick-off to show support for missing Cardiff striker Emiliano Sala and pilot David Ibbotson.

The first half was played at a frenetic pace, with plenty of hustle and bustle, but few clear-cut openings at either end.

A long-range effort from Luke Freeman flew comfortably wide, while Craig MacGillivray comfortably claimed when a cross was flicked on by Darnell Furlong.

Ronan Curtis did well to win a corner at the other end, with the ball ricocheting off Jack Whatmough and flying past the post.

The centre-back was more fortunate with a deflection on 27 minutes, as Furlong’s delivery hit him and landed safely in MacGillivray’s arms.

QPR should have done better moments later when Lynch was left in space to meet Freeman’s free-kick, but could only divert the ball straight at the Blues keeper.

It was Pompey who finished the half on the attack, however, and Pitman did find the back of the net, only for the officials to spot an infringement.

Dennis then went close just before the break with a half-volley from the edge of the area that Joe Lumley did well to tip over the bar.

Pompey came flying out of the traps after the interval, although Curtis could not keep his shot down after a slip presented him with a chance.

Dennis then played a delightful pass over the Rangers defence for Pitman, whose first time effort just cleared the bar.

And when Gareth Evans whipped a cross in from the right, Pitman was not quite able to divert a glancing header on target.

Dennis had been relatively subdued before the break, but was proving a real threat after it and has low centre had to be turned behind by Toni Leistner.

Pompey were on top and they finally made the pressure count by taking the lead just past the hour mark.

Brown sent a teasing ball into the box from wide on the left and LYNCH could only slice the ball into his own net.

QPR looked to hit back and it took a vital headed clearance from Whatmough to ensure the Blues remained in the lead.

But the visitors were level on 74 minutes when a corner pinged around the box and Wells stabbed it into the roof of the net from close range.

A challenge from Curtis on Josh Scowen then led to a huge melee in the centre of the pitch and when peace was eventually restored the winger was booked, along with Brown and Lynch.

Rangers came close to turning the contest on its head soon after, but Freeman fired wide when he should at least have tested MacGillivray.

That proved to be the last decent opening for either side, meaning another game will be fitted into Pompey's busy schedule.


Brett Pitman is hoping that Pompey will face Championship sides on a regular basis next season.


View the photos from the fourth round contest

Brown: Replay Not A Problem


Lee Brown is not moaning about having to play an Emirates FA Cup replay against QPR.

There are fewer than 4,500 tickets remaining for Pompey’s Emirates FA Cup clash with QPR.

Season ticket holders have until 11.59pm this evening to secure their regular seat for the fourth round tie on Saturday, January 26 (3pm kick-off).

Any that remain unsold will be released for general sale from 9am tomorrow.

The quickest and easiest way to purchase your seat is by visiting our eticketing site.

Fans can also buy tickets by ringing the Ticketmaster call centre on 0844 847 1898 or visiting the Anson Road ticket office.

There is an administrative charge of £2 per ticket for all phone sales. Please note that the usual ticket office phone number (0345 646 1898) will only be used for enquiries and sales of other games.

*Includes carer if on highest rate of DLA or PIP.
**Accompanied by a paying adult, senior or ambulant supporter. 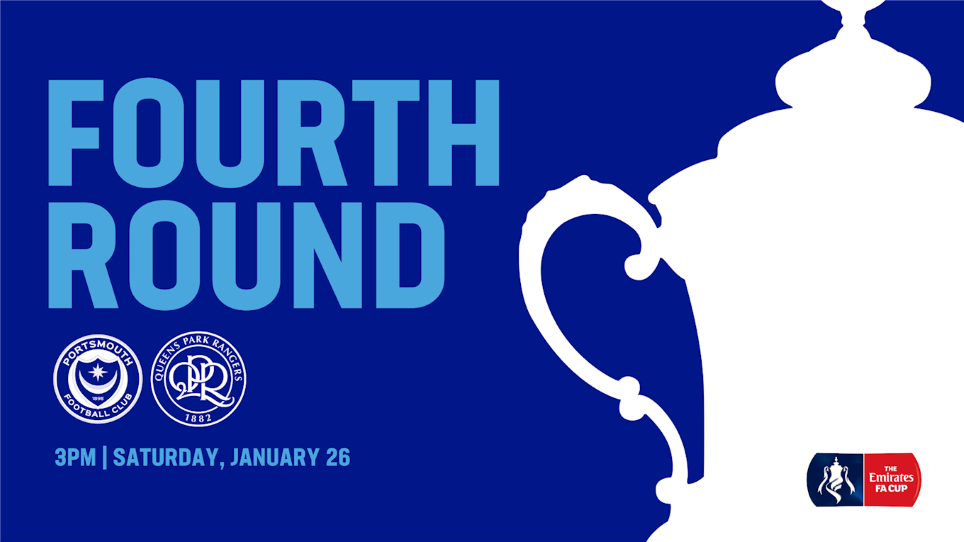 
Tickets are on general sale for Pompey's Emirates FA Cup clash with QPR.