Pompey have seen a return to form in recent weeks and will be looking to secure another victory against Scunthorpe on Saturday.

Kenny Jackett’s side have won two of their past three games – scoring nine goals in the process – to restore hopes of a promotion push.

But the Blues have also opened up a 13-point gap on seventh position to increase their chances of at least securing a play-off spot.

Their next opponents are currently down in 15th and, such with the bottom half of the table so tightly bunched, not out of relegation danger.

Stuart McCall’s men will want to increase their four-point buffer on the drop zone to secure a sixth successive season in League One.

A run of four fixtures without a win was ended earlier in the week when they fought from behind to beat Southend 4-1 on home soil.

The Iron reached the play-offs in both of the previous two seasons and were beaten on aggregate by Rotherham last term.

Tom Naylor and Gareth Evans found the target when Pompey won 2-1 at Glanford Park earlier in the season, while the most recent Fratton Park meeting ended 1-1.

TEAM NEWS
Ronan Curtis is out after severely damaging his finger earlier in the week, while there is a doubt over James Vaughan (back).

VIEW FROM THE DRESSING ROOM
Read the thoughts of Kenny Jackett and Viv Solomon-Otabor or register for a free iFollow account to watch the below video.

TICKETS
Seats can be secured online here or from the Anson Road ticket office, with tickets cheaper if bought in advance.

Subject to availability, they can also be purchased from the matchday ticket office on Frogmore Road on the day of the game.

BETTING
Pompey are the 3/5 favourites with Sky Bet to secure all three points, while the visitors can be backed at 17/4. 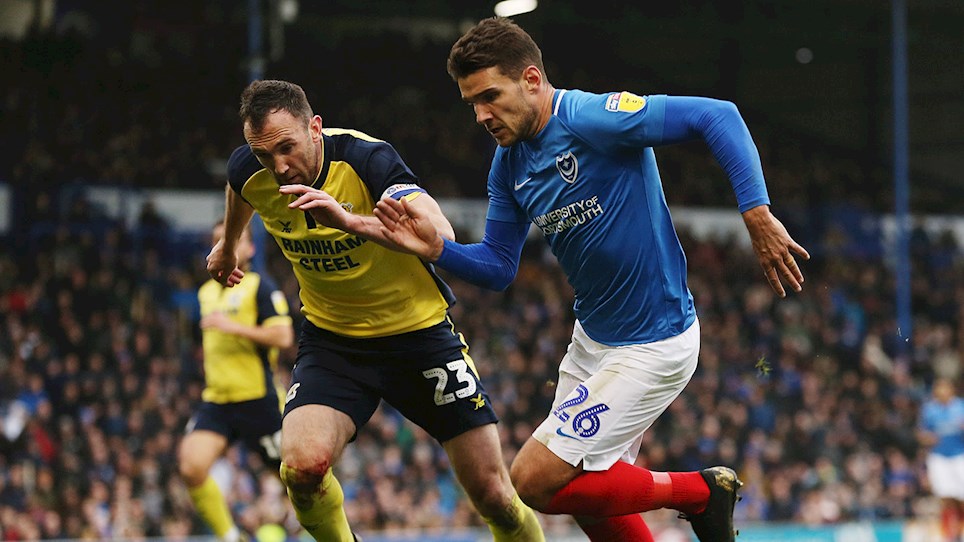 Evans: We Were Always Confident


Gareth Evans believes that patience was a key reason behind Pompey’s win over Scunthorpe at the weekend. 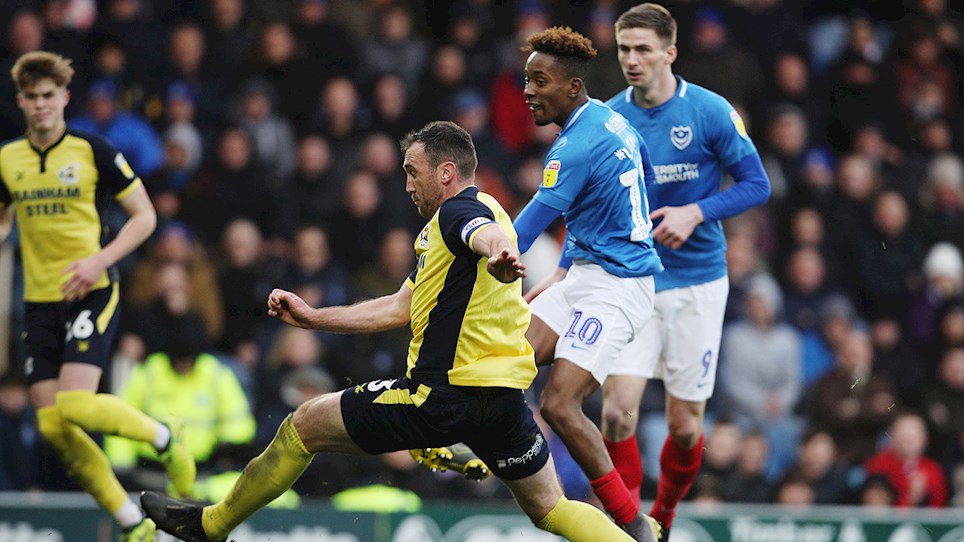 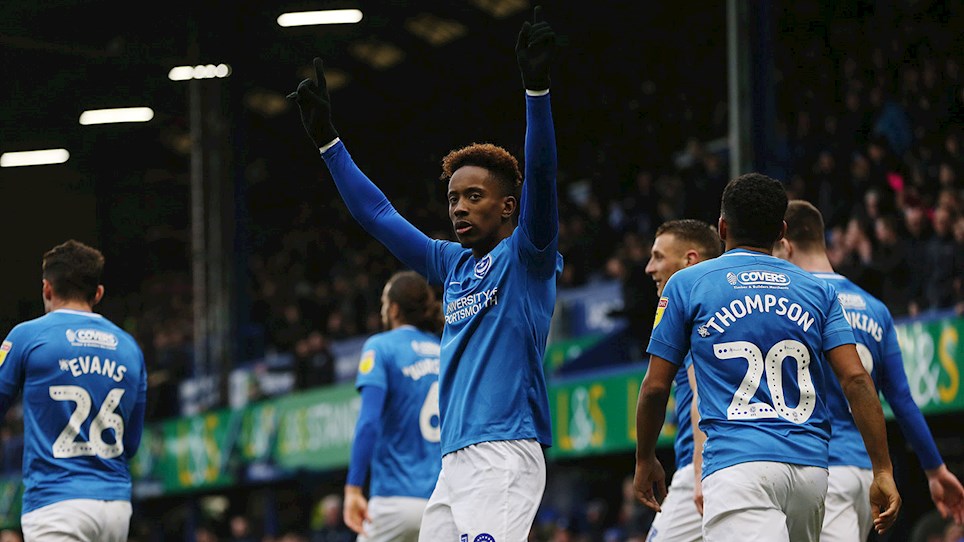 Lowe: I Could Have Had A Hat-Trick


It was a fine finish that arrowed into the top corner to ensure Pompey could celebrate all three points against Scunthorpe.

Pompey closed the gap on the automatic promotion places with a deserved 2-0 victory over Scunthorpe at a windy Fratton Park.

It was a dominant display from the Blues and there was a palpable sense of relief around the ground when Omar Bogle finally scored in the second half to make their dominance count.

Scunthorpe never looked like finding the net at the other end and the hosts made sure of the points thanks to a fine finish from Jamal Lowe late on.

Kenny Jackett stuck with the same side that won at Walsall earlier in the week, with skipper Brett Pitman playing just behind Bogle.

But with James Vaughan having not recovered from a back injury, Lloyd Isgrove took his place on the bench.

It was a blustery afternoon on the south coast, with the conditions clearly making life difficult for both sides.

So it was perhaps understandable that the passing on show was wayward at best in the opening exchanges.

Lowe and Viv Solomon-Otabor were looking lively on the wings, however, and the former had an effort that sailed narrowly over.

It was pretty quiet at the other end of the pitch, although a tame effort from Tony McMahon flew comfortably into Craig MacGillivray’s arms.

Bogle had a couple of shots blocked, but the first decent opening did not arrive until 26 minutes had been played.

Solomon-Otabor threaded a fine pass through to Lowe, who took the ball around Iron keeper Jak Alnwick, but – from a tight angle – could not force it past defender Harrison McGahey.

Pompey were enjoying plenty of possession and applying pressure on the visitors’ defence as the first half progressed.

And they almost broke the deadlock just before the interval after Solomon-Otabor’s delivery was only cleared as far as Bogle.

He managed to dig out a shot that Alnwick did well to save and when Pitman put the ball back into the centre, a stretching Lowe could not make a clean connection with the goal gaping.

Solomon-Otabor then slipped off the ball and required treatment on the pitch, but was okay to continue.

It was only a brief return to action for the loanee, though, who soon had to make way for Gareth Evans.

The substitute had the first chance of the second half with a drilled effort from the edge of the box that was deflected past the post.

He then hit another 20-yard effort narrowly wide after the ball had been worked to him from a throw.

Clear-cut openings were proving to be at a premium, although Alnwick leapt out a bending Lee Brown attempt on the hour mark.

A longer-range strike from Tom Naylor then fizzed past the post, as the hosts continued to dominate without really going close to scoring.

Pompey were trying their best to raise the tempo – with the wind still swirling around the ground – and Brown was denied what would have been a soft penalty for an apparent push.

Alnwick did well to stop his side falling behind on 68 minutes, tearing off his line to bravely prevent Lowe from converting Evans’ ball into the box.

But the Blues finally made their pressure count moments later following a foul on Lowe by Rory McArdle.

Evans’ free-kick was flicked on for Close, but BOGLE took the ball and spun sharply before leaving Alnwick flat-footed with his finish.

The hosts tried to put the result beyond doubt and Brown’s cross was just too high for Pitman, while the left-back then saw a shot deflected behind.

Bogle received a warm reception as he made his way off the pitch to be replaced by Oli Hawkins for the final few minutes.

And the win was wrapped up on 87 minutes when LOWE collected the ball from the right, used his touch to make space and then lashed home a fine finish.

It meant that the Fratton faithful could relax for the closing stages, as Pompey comfortably saw the game out.

Evans: We Were Always Confident


Gareth Evans believes that patience was a key reason behind Pompey’s win over Scunthorpe at the weekend.

Lowe: I Could Have Had A Hat-Trick


It was a fine finish that arrowed into the top corner to ensure Pompey could celebrate all three points against Scunthorpe.