Pompey have already qualified for the Checkatrade Trophy knockout stages ahead of tonight’s final group game against Tottenham U21s.

But Kenny Jackett’s side will still be keen to secure first position and guarantee a home tie in the last 32.

They need to avoid defeat to do that, with a draw enough for the Blues – no matter the result of the bonus point penalty shoot-out.

Their opponents, meanwhile, will almost certainly progress by collecting a single point, such is their superior goal difference over third-placed Crawley.

But even a defeat might be enough, depending on the outcome of the Sussex side’s clash with already-eliminated Gillingham.

The Spurs youngsters are managed by former Dagenham & Redbridge boss Wayne Burnett, who had a spell scouting for Pompey when Paul Cook was in charge.

They currently sit ninth in the top tier of Premiere League 2 and beat Gillingham 4-0 in their last Checkatrade Trophy outing.

Blues fans will have extremely fond memories of the most recent time their club faced Tottenham back in 2010.

Frederic Piquionne and Kevin-Prince Boateng both found the net in extra-time at Wembley to stun the Londoners in an FA Cup semi-final.

TEAM NEWS
Kenny Jackett is expected to make multiple changes and has already confirmed that a fit-again Andre Green will start.

But Brett Pitman misses out with a minor knee problem, while Dion Donohue (hamstring) and Joe Mason (groin) are still sidelined.

VIEW FROM THE DRESSING ROOM
Read the thoughts of Kenny Jackett and David Wheeler or register for a free iFollow account to watch the below videos.

TICKETS
Seats are still available and can be bought online here or from the Anson Road ticket office. Please note that only the Fratton Endn and ‘A’ Section of the South Stand Upper are open for this fixture.

Fans buying tickets this evening can visit the ticket offices in Anson Road or Frogmore Road, while there will be cash sales from the booth next to the North Stand car park or the cobbles underneath the South Stand.

Supporters are advised to arrive early if buying tickets this evening to avoid long queues and ensure they do not miss the club’s Remembrance commemorations, which are due to begin at 7.30pm.

Ticket collections can be made from main reception from 5.30pm, while turnstiles will open at 6.30pm.

Fans are advised that the Victory Bar will not be open this evening, as it is being used for blood donations.

BETTING
Pompey are the 5/6 favourites with Sky Bet to secure all three points, while the visitors can be backed at 13/5. 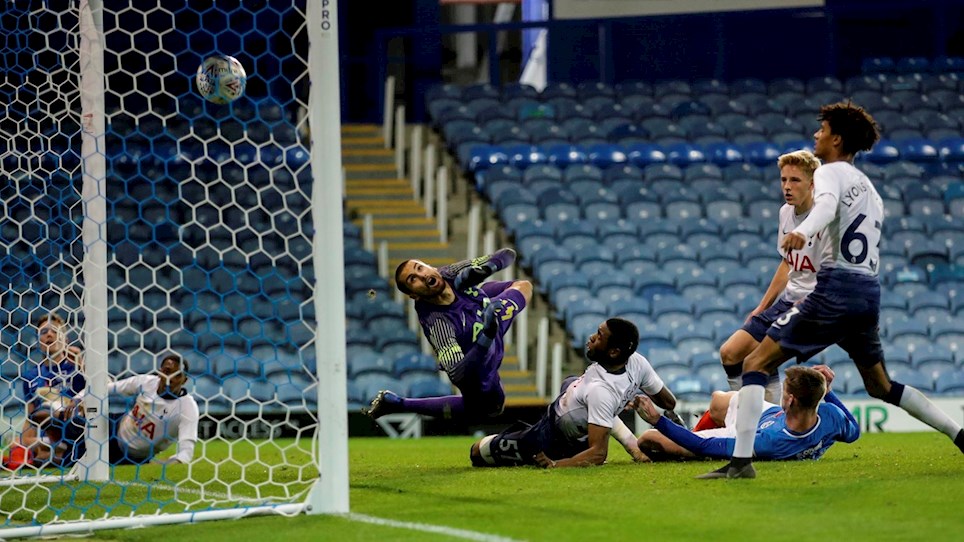 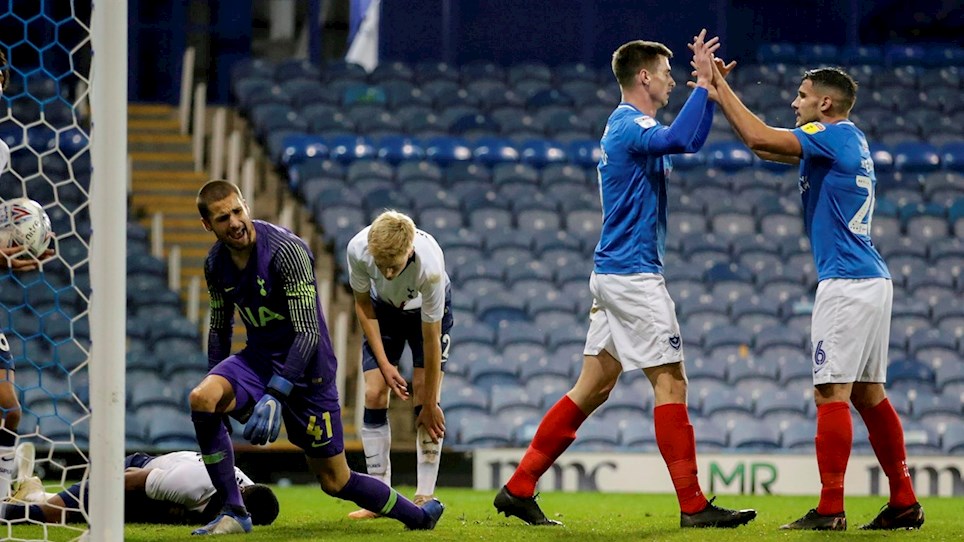 
View the photos from the Blues' group stage success 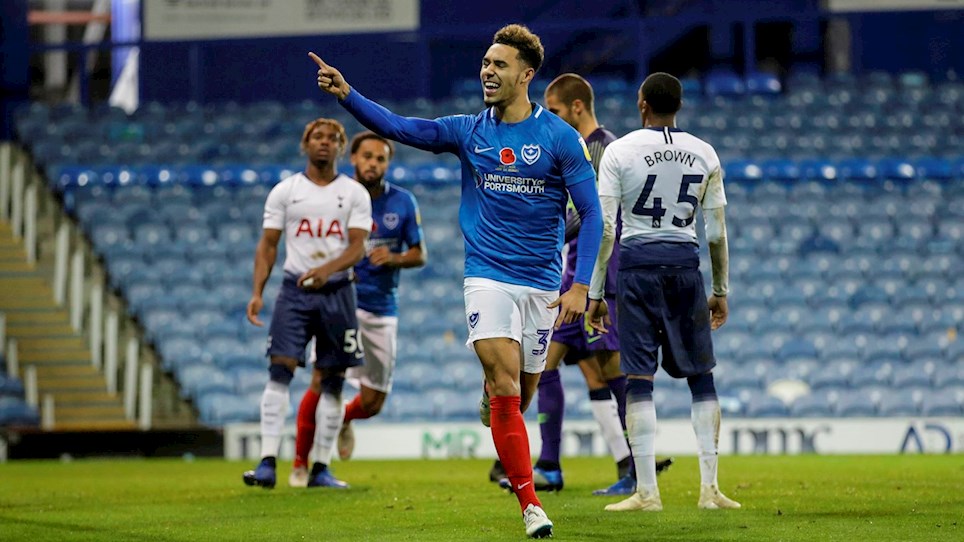 
Andre Green’s Pompey career had barely got started when it hit a stumbling block. 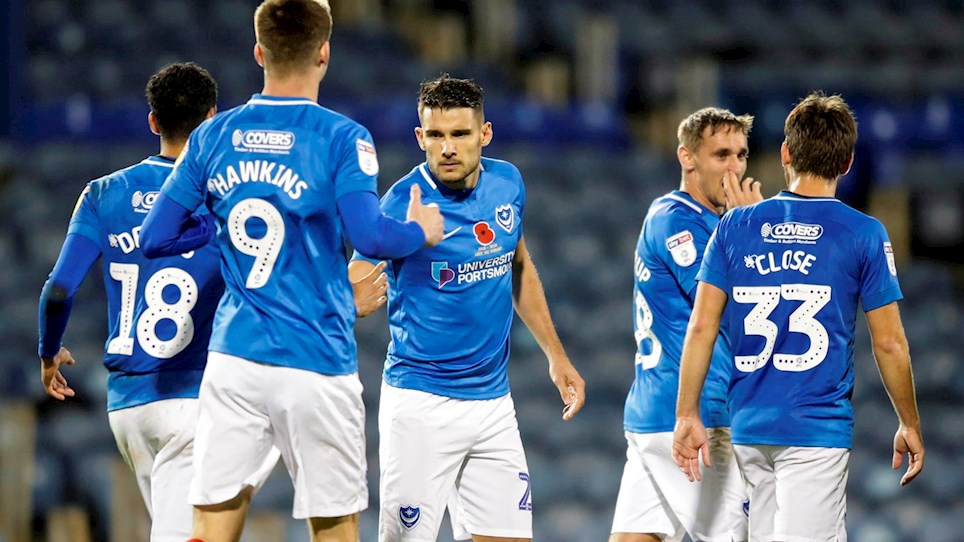 Gallen: A Game Of Two Halves


Pompey did not look like the same side that had battled their way to the League One summit.

Pompey fought from behind to beat Tottenham’s under-21 side and secure top spot in Southern Group A of the Checkatrade Trophy.

Phoenix Patterson had given the visitors the lead against the run of play in a first half that could best be described as flat.

But the Blues were much improved after the interval and Andre Green opened his account for the club to get them back on level terms.

There was only going to be one winner from that point, with substitutes Gareth Evans and Oli Hawkins completing the job before Harvey White grabbed a late consolation.

Bradley Lethbridge was handed his debut up front, while fellow academy player Haji Mnoga – who appeared in the previous Checkatrade Trophy game at Crawley – had another chance to impress.

There were also starts for on-loan wingers Green – back from a knee injury – and David Wheeler, with Louis Dennis completing the forward line.

With it being Pompey’s nearest match to Armistice Day, the club commemorated the occasion before kick-off.

Wreaths were laid by both captains and a video of D-Day veteran John Jenkins MBE reading the Ode of Remembrance was played on the big screen.

The sides – with the hosts having poppies embroidered into their shirts – then lined-up for a minute’s silence, accompanied by the Last Post.

There was not much to excite a smaller than usual crowd in the first half, although the hosts were largely in control.

They did not do much to threaten Alfie Whiteman, however, with the keeper making a comfortable save to deny Green.

And Tottenham broke the deadlock against the run of play on 20 minutes, as Patterson latched on to a through ball and bore down on goal.

Luke McGee was quickly off his line to make the save, but the loose ball was collected by the winger, who slotted home.

Lethbridge was causing a nuisance, although after doing well to bundle his way into the box, he was eventually crowded out.

Dennis also had an effort blocked, while Ben Close fired narrowly over after winning the ball on the edge of the box.

There was little threat at the other end of the pitch and when Kazaiah Sterling broke clear, skipper Christian Burgess was quickly across to make a perfectly-timed sliding challenge.

The hosts perked up a bit towards the end of the half and Wheeler glanced a corner inches past the post, while an inventive Burgess header drew a save from Whiteman.

The action had dragged before the interval, but it soon livened up after it, with a series of chances arriving at both ends of the pitch.

Anton Walkes – playing against his former club – was first to try his luck, with a low effort that took a slight deflection to divert it just off target.

But an equaliser did arrive moments later, as a corner from Dennis was nodded on by Burgess and GREEN forced the ball home at the far post.

Tottenham came close to an instant reply, though, with McGee getting down well to tip Patterson’s shot around the post.

And a breathless period of play was completed by Close seeing his deflected effort held by Whiteman.

Pompey were seeing more of the ball, but it still took another superb challenge by Burgess inside the box to stop Sterling getting a shot away.

Jackett made all three of his substitutions on 65 minutes, with Green, Lethbridge and Mnoga replaced by Evans, Hawkins and Matt Clarke.

And EVANS’ first contribution was to fire the Blues into the lead, smashing a free-kick through the wall after Dennis had been fouled on the edge of the box.

The game slowed slightly after that, although it was still the hosts who were well on top as the action neared a conclusion.

They made sure of the victory on 81 minutes, with Wheeler getting free down the right and cutting the ball back for HAWKINS to prod home from close range.

White did pull one back with a fine free-kick after Danny Rose had committed a foul, although Tottenham were unable to find a leveller.

The visitors could, however, console themselves with the fact that Crawley’s defeat to Gillingham means they join the Blues in the knockout stages.


View the photos from the Blues' group stage success


Andre Green’s Pompey career had barely got started when it hit a stumbling block.

Gallen: A Game Of Two Halves


Pompey did not look like the same side that had battled their way to the League One summit.

Kenny Jackett’s men take on Tottenham’s under-21 side at Fratton Park on Tuesday, November 13 (7.45pm kick-off).

But supporters can also call 0345 646 1898 or pay a visit to the new Anson Road ticket office, with parking available behind the North Stand.

Please note that only the Fratton End and ‘A’ Section of the South Stand Upper will be open for home fans for this fixture, while season ticket holders’ seats are not reserved.

Pompey have already qualified for the knockout stages having won their opening two Southern Group A games against Gillingham and Crawley.

However, victory or a draw – whatever the result of the subsequent ‘bonus point’ penalty shoot-out – would see them finish top and guarantee a home tie in the last 32.