Pompey’s current league placing means they are, technically, the best side in the first round of the Emirates FA Cup.

So they will be keen to avoid an upset when they visit National League strugglers Maidenhead this weekend.

And there will likely be plenty of neutrals cheering on the underdogs, with the game taking place in front of the BT Sport cameras.

The Blues, of course, beat Cardiff to lift the trophy for a second time back in 2008, then returned to Wembley and were narrowly beaten in the final two years later.

But it has been fairly slim pickings since then, with their only victories in the competition occurring during a 2015/16 run to the fourth round.

Their latest opponents needed a replay to see off lower league Chippenham in the fourth qualifying round and set-up this clash with the Blues.

But that is the Magpies only victory since beating Chesterfield towards the end of September and a run of six successive league defeats has seen Alan Devonshire's men drop into the relegation places.

Included in that spell of poor form was a 7-0 defeat at Havant & Waterlooville, with Pompey coach Paul Robinson starting for the hosts.

TEAM NEWS
Pompey will be without Dion Donohue (hamstring) and Joe Mason (groin), although Nathan Thompson is available again following a one-match ban.

The hosts could hand a debut to Alfie Kilgour, who has arrived on loan from Bristol Rovers, but midfielder Christian Smith is suspended.

HEAD TO HEAD
There have been no previous meetings between Pompey and Maidenhead.

TICKETS
All of Pompey’s tickets have been allocated and no more will be available to buy at York Road on the day of the game.

Supporters without a ticket will be able to watch the game live on BT Sport 1, with coverage starting from 12.15pm.

MATCH COVERAGE
Domestic iFollow subscribers can listen to live commentary from Andrew Moon and Guy Whittingham by signing into their account and visiting the match centre from 12pm on Saturday.

Supporters based overseas should check their local listings to see if the game is being televised in their region.

BETTING
Pompey are the 2/7 favourites with Sky Bet to progress to the second round on Saturday, while the hosts can be backed at 9/1. 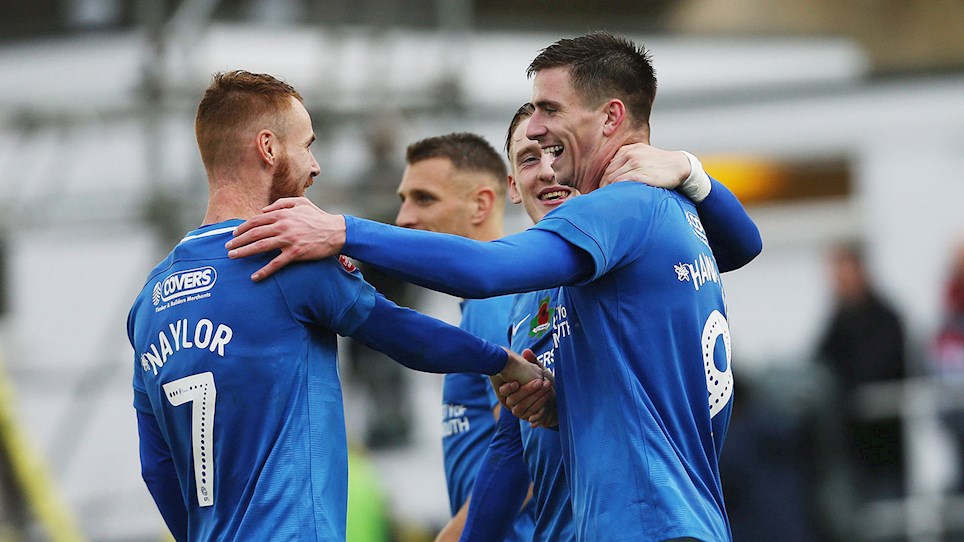 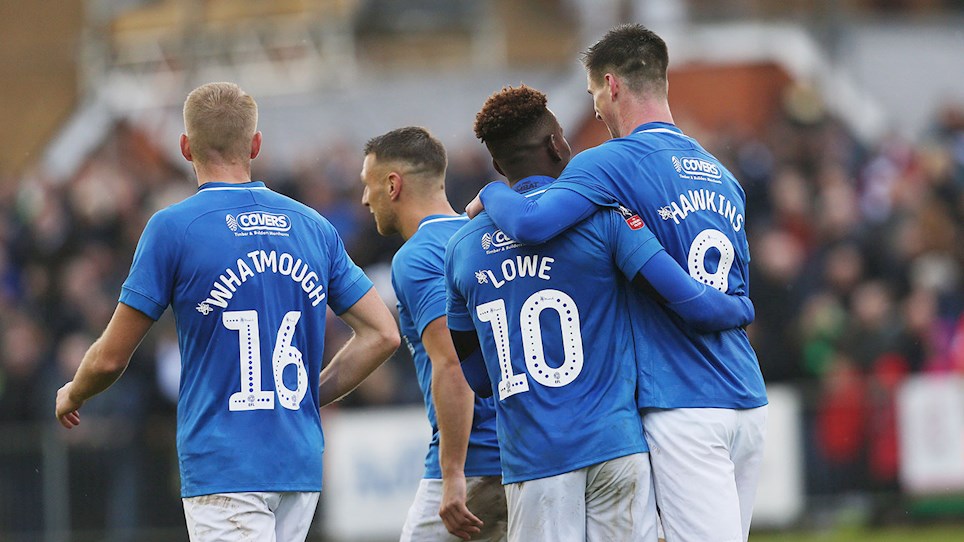 
View photos from the Blues' first round victory at York Road 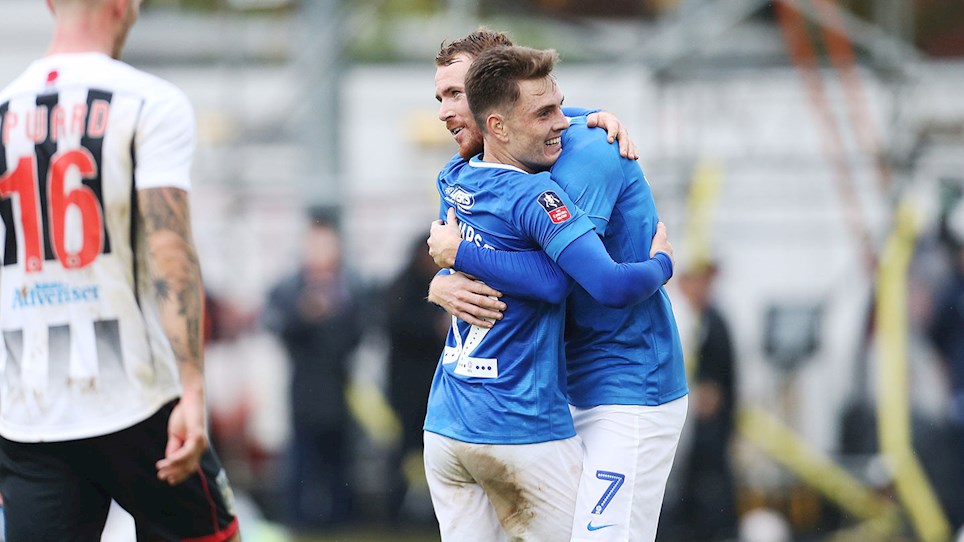 
Ben Thompson’s first goal as a professional footballer came in the FA Cup and of the four he had scored in total, three came in that competition. 
The BT Sport cameras were sent to York Road because of the possibility of an FA Cup giant-killing.

by Neil Weld at York Road

Pompey eased their way into the second round of the Emirates FA Cup with a 4-0 victory over Maidenhead.

But the National League strugglers made the Blues work hard for their opening goal at York Road, with Ben Thompson finally netting just before the break.

It was less of a struggle in the second half, though, with Oli Hawkins, Jamal Lowe and David Wheeler all finding the target.

Kenny Jackett made a single change from the side that won at Bradford in the league the previous week.

Nathan Thompson – back from a one-match ban – replaced Anton Walkes at right-back, with the visitors clearly taking the game seriously.

Gareth Evans skippered the side on his 150th appearance for the club, while former Pompey striker Ryan Bird was among the Maidenhead substitutes.

Both captain’s laid a wreath on the pitch before kick-off and the teams wore poppies on their shirts, while a minute’s silence was held to commemorate Remembrance weekend.

When the action got underway, it was Pompey who dominated possession without being able to carve open many clear-cut chances.

Carl Pentney was being well protected, although the keeper comfortably claimed a Hawkins effort before punching clear under pressure from the same player.

The first noteworthy incident came on 18 minutes, when the tricky Ronan Curtis got free down the right and crossed for Hawkins, whose header was deflected behind.

And they should really have forged ahead midway through the first half, with Tom Naylor the guilty party.

He failed to connect with an ambitious over-head attempt, but when Evans’ shot was parried into his path moments later, the midfielder turned the ball against the crossbar from a few yards out.

Maidenhead then came close to scoring themselves soon after, with Ayo Obileye’s strike crashing against the post.

Remy Clerima was also causing problems with a series of long throws, while Nathan Thompson was unable to beat Pentney from a tight angle at the other end.

Pompey won a succession of corners as the half progressed and the heavens opened, although were being frustrated in their attempts to test Pentney.

But the deadlock was finally broken just before the interval, as Curtis whipped in a low cross and Ben THOMPSON fired home to open his account for the club.

The second half was slow to really click into gear, although it was still the Blues seeing most of the ball.

And they doubled their lead on 55 minutes, with Evans crossing from the right and HAWKINS sending a header looping over Pentney and into the net.

That gave the visitors a cushion, but their lead was even more comfortable when a third went in on the hour mark.

Ben Thompson sent a free-kick into the box and Jack Whatmough nodded the ball down for LOWE, who turned and guided a neat finish into the bottom corner.

Jackett decided the time was right to make a double change, with Lowe and Evans withdrawn for Brett Pitman and Wheeler.

Pompey’s play was more patient with such a commanding advantage, but they were still looking to get forward.

And when they were unable to find a path through the Magpies defence, Ben Thompson hit a long-range shot that was saved by Pentney.

The keeper also kept out a header from Pitman after he had been spotted in the box by Lee Brown.

Pompey’s captain also fired a shot narrowly over the bar after Nathan Thompson won the ball back when a fine passing move came to an end.

The same duo combined again moments later and this time Pentney was forced into a decent save low to his left to keep out Pitman’s sweet first time strike.

But it was WHEELER who wrapped things up on 83 minutes, stooping to head home after Brown’s free-kick had been superbly saved.

There was still time for Pitman to steer narrowly wide following a mad scramble in the box, but the visitors could be happy with their afternoon’s work.


View photos from the Blues' first round victory at York Road


Ben Thompson’s first goal as a professional footballer came in the FA Cup and of the four he had scored in total, three came in that competition.


The BT Sport cameras were sent to York Road because of the possibility of an FA Cup giant-killing.

A ballot will be held to allocate tickets for Pompey’s Emirates FA Cup match at Maidenhead.

Blues fans have been given 660 tickets for the first round tie at York Road on Saturday, November 10 (12.30pm kick-off).

The majority of these are terrace places, with just 175 seats available for away supporters.

The easiest way for applications to be made is online here. Applications can also be made by calling 0345 646 1898 or in person at the Anson Road ticket office. Fans will be able to select their preference for seating or standing.

Supporters can also apply in a group if their accounts are linked (click here for more information on this). Please note that, depending on the result of the ballot, either everyone in the group will be allocated a ticket or nobody will.

Valid debit/credit card details must be supplied as, if successful, ticket costs and booking charges will be debited from your account. If the payment is not authorised then the ticket will be assigned to another applicant.

Applicants will be informed by email whether or not they have been successful. Fans who do not receive a ticket will be able to watch the match live on BT Sport 1.

*Students will need to bring their ID to the Pompey ticket office or email a copy of it to tickets@pompeyfc.co.uk along with their Client ID by 5.30pm on Thursday, November 1.

Wheelchair users should contact Maidenhead directly on 01628 636314. Ambulant supporters who require a carer should contact Pompey on 0345 646 1898 or visit the ticket office.

Official coach travel can be booked online here or by calling Lucketts Travel on 01329 237000 from Tuesday (October 30).