Pompey will want to show their first league defeat of the season was just a blip when they visit AFC Wimbledon at the weekend.

Kenny Jackett’s side remain at the League One summit, despite a 2-0 home reverse to Gillingham last Saturday.

And they will be looking to protect an impressive away record, with just two points dropped on opposition turf so far this term.

Their next opponents sit 20th and are a solitary point above the drop zone after the opening 12 fixtures.

The Dons go into the game having lost four of their last five league matches, including successive defeats to Bradford and Plymouth.

Neal Ardley’s side have won just once on their own patch – a narrow victory over struggling Oxford last month.

They have already beaten the Blues once this season, however, coming out on top when the sides met in the first round of the Carabao Cup.

But Pompey won both of the previous campaign’s league meetings, with Brett Pitman and Conor Chaplin on target in a 2-0 triumph at Kingsmeadow.

TEAM NEWS
Ronan Curtis is currently away on Republic of Ireland international duty with the under-21s, while Pompey are also missing wingers Andre Green (knee) and David Wheeler (ankle).

James Hanson could feature for the hosts after returning from a hamstring injury, but Terrel Thomas (knee) is still sidelined.

Former Blues players Jake Jervis – currently on loan from Luton – and Andy Barcham are both expected to appear.

*Including results against the ‘old’ Wimbledon

TICKETS
Pompey have sold their full allocation of tickets and no more will be made available. Please do not travel if you do not have a ticket.

BETTING
Pompey are the 13/10 favourites with Sky Bet to secure all three points, while the hosts can be backed at 21/10. 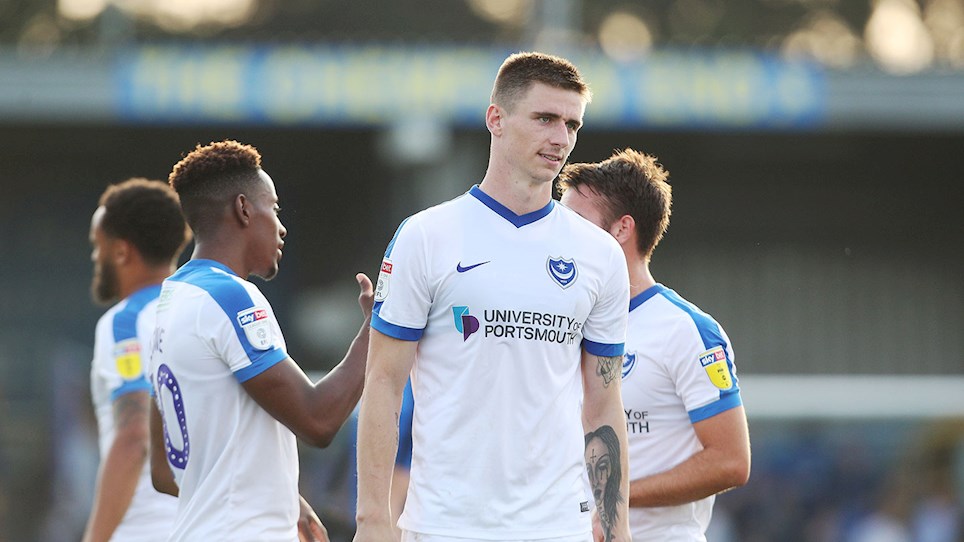 
Top the table and holding an away record that is not bettered in the professional English game. 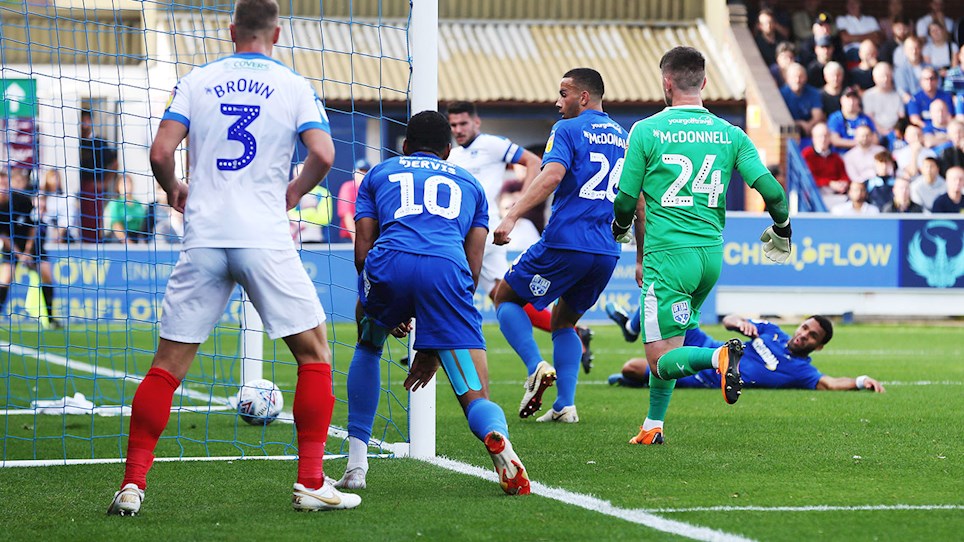 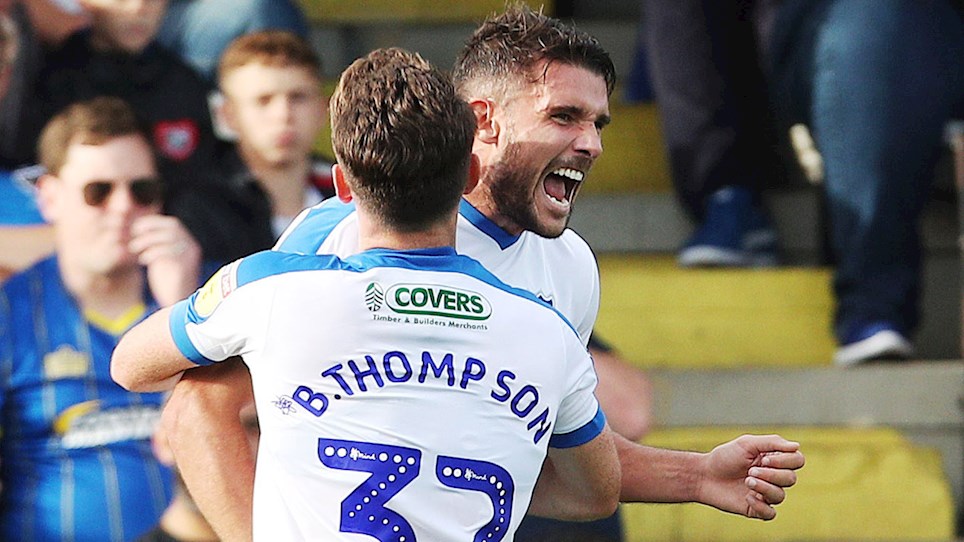 
View the photos from the Blues' league triumph at Kingsmeadow 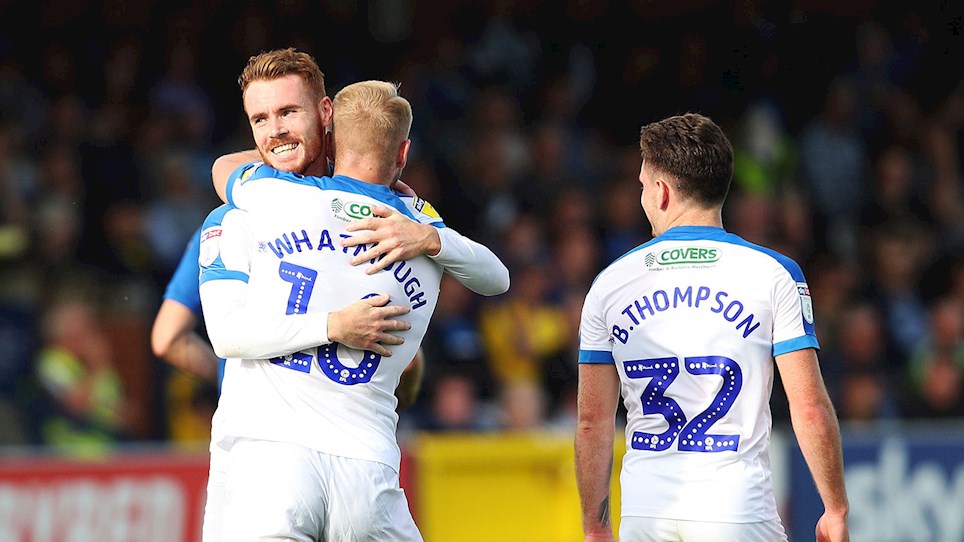 Naylor Determined To Stay At Summit


He opened the scoring in Pompey’s deserved 2-1 victory at AFC Wimbledon.

by Neil Weld at Kingsmeadow

Tom Naylor and Gareth Evans were on target as Pompey secured a deserved victory at AFC Wimbledon.

But they were forced to endure a nervy conclusion after a fine James Hanson strike reduced the Dons’ deficit.

Up until that point it had been a dominant afternoon for the visitors, with Naylor’s header opening his account for the club.

Evans doubled the advantage before the break and the Blues had several more chances to extend the lead further.

But Hanson pulled one back for Wimbledon and a tense finale ensued before the final whistle was blown.

Kenny Jackett made three changes from the side that were beaten by Gillingham in the last league fixture.

Dion Donohue was rewarded for his winning Checkatrade Trophy goal earlier in the week, while there were also returns for Ben Thompson in midfield and Oli Hawkins up front.

Brett Pitman and Ben Close both dropped to the bench, with Ronan Curtis absent on international duty.

There were a couple of familiar faces on the Wimbledon flanks, with former Pompey players Jake Jervis and Andy Barcham both starting.

The first half was a breathless affair, with the visitors in almost total control from first whistle until last.

AFC Wimbledon were indebted to Joe McDonnell in the opening stages, with the keeper saving Naylor’s header with his legs following a corner from Donohue.

He then raced off his line to deny Evans after the stand-in skipper had raced on to a great pass from Nathan Thompson.

It was an unseasonably warm afternoon in south-west London, but conditions proved difficult when the breeze picked up.

Craig MacGillivray was relatively untroubled, although he was called into action to keep out a deflected Tom Soares free-kick.

A rare spell of prolonged Dons pressure then ended with the stopper keeping out a low attempt from Jervis.

But it was Pompey on top and they deservedly broke the deadlock on 24 minutes – much to the delight of the lucky ballot winners packed into the away end.

Another fine corner from Donohue was met by NAYLOR, whose header deflected off Liam Trotter and managed to cross the line.

They kept pouring forward and Hawkins nodded narrowly wide from a Lee Brown cross, while Deji Oshilaja did well to dispossess the lively Jamal Lowe in the box.

But the advantage was doubled on 31 minutes, as Brown sent a low delivery across the face of goal and EVANS raced in at the far post to arrow a shot home.

The wind almost caught out MacGillivray at the other end, with Jervis’ cross catching a gust and landing on the roof of the net.

Still the Blues kept up their attacking intent, however, and a long-range effort from Naylor was just about pushed wide by McDonnell.

A vital block from Oshilaja then came to Wimbledon’s rescue after Lowe had bamboozled the back-line and picked out Hawkins.

The only down side for the visitors was a couple of bookings they collected from referee Lee Probert just before the interval.

Donohue was penalised for an alleged dive in the box, with Jack Whatmough booked for a late challenge on Joe Pigott.

Such had been Pompey’s dominance, that opposition manager Neal Ardley made all three of his substitutions at the break.

Tennai Watson, Barcham and Pigott were all hauled off, with Will Nightingale, Anthony Hartigan and Hanson replacing them.

The three newcomers were out there on their own for a while, however, with the rest of the home side taking an age to take to the pitch.

It was the Blues that were first to threaten after Soares had been booked for a swipe at Nathan Thompson.

Whatmough’s free-kick was nodded on by Hawkins for Lowe, who tried a cheeky back-heel that McDonnell got down to keep out.

The traffic was continuing to head in the same direction and a couple of corners almost led to more goals.

When the first of them was only partially cleared, a thunderbolt from Donohue flew narrowly off target.

He took the second himself and it was met by the head of Matt Clarke, with a well-placed Jervis clearing from the line.

But Wimbledon suddenly found themselves back in the game with a goal of their own just past the hour mark.

It was slightly unfortunate for the visitors, with Evans mis-cueing his clearance and Hanson capitalising with a fine finish that curled around MacGillivray’s dive and into the net.

The Dons might have had another soon after, but Jervis could only head the ball straight to the keeper after meeting Oshilaja’s cross.

A corner from Evans was nodded inches wide by Clarke, as Pompey tried to restore their grip on the contest.

Jackett made his first switch on 74 minutes, with Donohue the man to make way for Ben Close in midfield.

Wimbledon were playing with much more belief by this point, though, with Whatmough and Clarke both making blocks to deny Kwesi Appiah.

A second Blues change occurred soon after, with Hawkins being replaced by Pitman in the lone striking role.

The visitors were more content to use up time as the seconds ticked down, before the Pompey fans could finally celebrate another victory.


Top the table and holding an away record that is not bettered in the professional English game.


View the photos from the Blues' league triumph at Kingsmeadow

Naylor Determined To Stay At Summit


He opened the scoring in Pompey’s deserved 2-1 victory at AFC Wimbledon.

A ballot will be held to allocate tickets for Pompey’s league visit to AFC Wimbledon.

Blues fans have been given just over 700 tickets for the Cherry Red Records Stadium clash on Saturday, October 13 (3pm kick-off). The majority of these are terrace places, with just 64 seats available.

The easiest way for applications to be made is online here. Applications can also be made by calling 0345 646 1898 or in person at the Anson Road ticket office.

Fans will be able to select their preference for seating or standing.

Valid debit/credit details must be supplied, as if successful, ticket costs and booking charges will be debited from your account. If the payment is not authorised then the ticket will be assigned to another applicant.

Applicants will be informed by email whether or not they have been successful.

Wheelchair users or ambulant fans who require a carer should call or visit the ticket office.