Pompey will look to beat a record that has stood for 34 years when they visit Coventry this evening.

The 1984/85 campaign was the last time that the Blues began a season with 10 unbeaten league games.

They fell at the next hurdle to Wimbledon on that occasion, but the current crop will try to make it 11 on the bounce at the Ricoh Arena.

Coventry are sitting 14th in the League One standings following Saturday’s 1-1 home draw with Sunderland.

The four other fixtures on their own patch have resulted in victories over Plymouth and Barnsley, and defeats to Scunthorpe and Rochdale.

It has been a solid start for Mark Robins’ men, who beat Exeter at Wembley to secure promotion via the play-offs last term.

This is the first time the sides have met in league competition since both were in the third tier during the 2012/13 campaign.

Pompey collected four points from the Sky Blues during that ill-fated season, although Coventry were 3-2 victors in a Carabao Cup clash a couple of years ago.

TEAM NEWS
Andre Green (knee) is still injured, while Dion Donohue is not ready for action after returning to training following a hamstring problem.

Coventry goalkeeper Lee Burge is a doubt after being hit in the head by an ice hockey puck while watching a match on Sunday.

If he is unable to feature, then former Pompey stopper Liam O’Brien will replace him between the sticks.

TICKETS
Pompey fans can buy tickets from away turnstile five (cash only) at the Ricoh Arena this evening, although prices do increase by £3.

Supporters collecting tickets can pick them up from the ticket office located opposite the casino.

Please note that there is a residents’ permit zone in place around the ground and fans are advised to pre-book official parking.

Domestic subscribers will, as usual, be able to listen to listen to live commentary from Chris Wise Moon and Guy Whittingham by signing into their account and visiting the match centre from 2pm.

BETTING
Pompey are the 7/5 favourites with Sky Bet to secure all three points, while the hosts can be backed at 2/1. 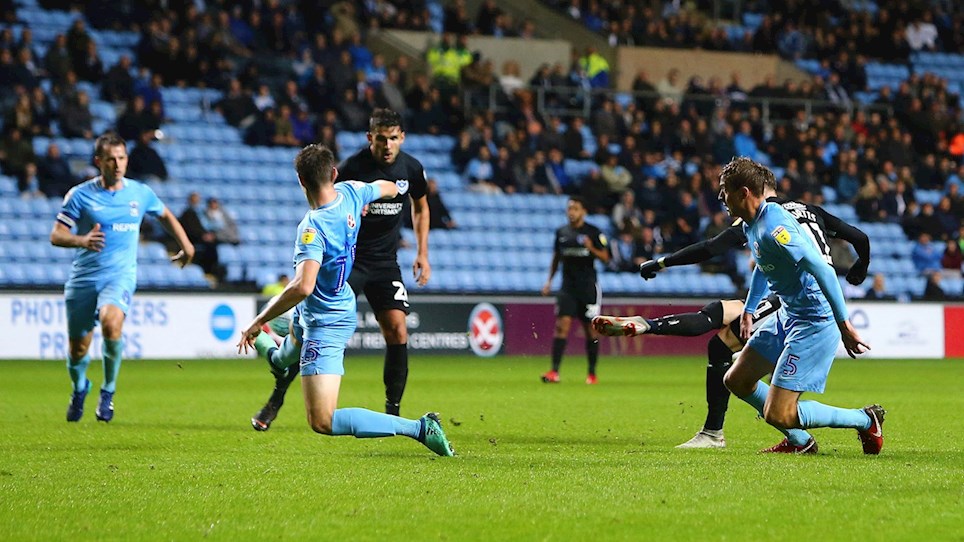 
Lee Brown believes that Pompey have got the best defence in League One. 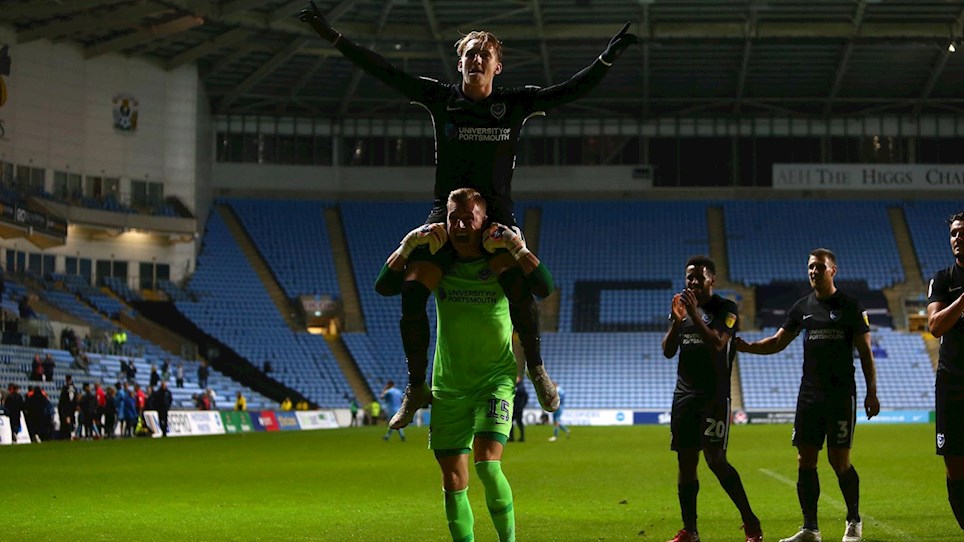 
View the photos from the Blues' latest League One victory 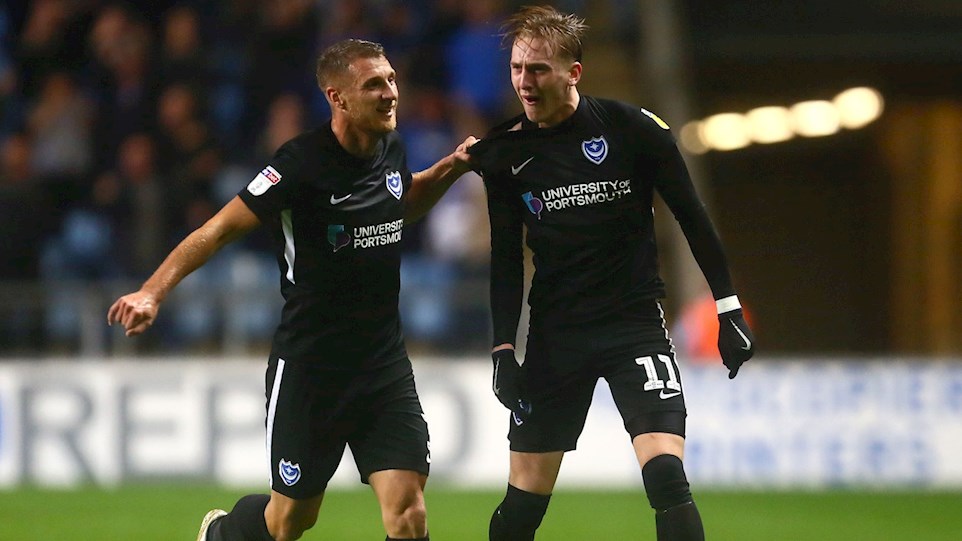 
He has not taken long to settle into life in the English game.

by Neil Weld at the Ricoh Arena

Ronan Curtis scored on the stroke of half-time to fire Pompey to victory in an otherwise uneventful match at Coventry.

Not that the near-2,000 travelling fans will care much about the quality of the contest, as they saw their side extend their unbeaten start to the season.

In a game of extremely few genuine opportunities, Curtis’ curling finish stood out and ensured the Blues remained top of the League One table.

Kenny Jackett unsurprisingly stuck with the same side that beat Rochdale to reach the League One summit on Saturday.

There were a few familiar faces in the opposition line-up, with Michael Doyle, Tom Davies and Dom Hyam all starting, and Liam O’Brien on the bench.

The first half was a largely forgettable affair, with long periods of lifeless play punctuated by a few key moments.

Pompey were first to threaten and Ben Close should at least have sent the ball on target when he met Nathan Thompson’s cross with a side-foot shot.

A dangerous corner from Gareth Evans then had to be headed clear by Jonson Clarke-Harris, as the visitors looked to make a fast start.

But there were not many other clear-cut opportunities to excite the crowd inside the cavernous Ricoh Arena.

A booking apiece for Dujon Sterling and Tom Naylor rose them from their slumber, although the latter was adamant he had won the ball cleanly from Luke Thomas.

But Pompey received a let-off on the half-hour mark when Matt Clarke inexplicably stopped in his tracks, allowing Clarke-Harris to surge towards goal.

Craig MacGillivray thankfully came to the rescue, tearing from his line to make a vital save and then leaping on the loose ball.

It looked like the sides would crawl uneventfully towards the interval, with a few Blues crosses that were headed clear about as exciting as it got.

But the large travelling army from the south coast had reason for their non-stop chanting in stoppage-time.

Evans stole possession from former team-mate Doyle and Close’s pass was nodded down by Brett Pitman.

It looked like CURTIS had taken too long to get his shot away, but he was merely making space to curl home a fine finish.

Pompey made an energetic start to the second half, although Evans was forced to take one for the team and pick up a booking when Thomas broke quickly following a corner.

But it was still proving to be a fairly scrappy encounter, with both sides struggling to keep hold of the ball.

There were plenty of bs being sent into the boxes, but it always seemed to be an opposition player getting on the end of them.

Coventry did enjoy more possession as the half progressed, although it was proving a comfortable evening for MacGillivray.

Tony Andreu attempted an ambitious volley on the edge of the Blues box and swiped at thin air to sum up the attacking quality on display.

Jackett made a chance on 70 minutes, bringing on Ben Thompson to replace Close and shore up his midfield.

And Pitman then made way for Oli Hawkins as time continued to tick away without anyone looking likely to add to the scoring.

The first of those newcomers did have a rare chance towards the end, with a fierce finish that Lee Burge just about dealt with.

Jamal Lowe also curled a shot narrowly past the post, as Pompey appeared to be comfortably heading for victory.

But they survived a scare at the death, with MacGillivray failing to hold Doyle’s free-kick and a scramble ensuing before Naylor hooked from the line.


Lee Brown believes that Pompey have got the best defence in League One.


View the photos from the Blues' latest League One victory


He has not taken long to settle into life in the English game.

Tickets are still available for Pompey’s match at Coventry on Tuesday evening.

Blues fans have already snapped up more than 1,700 seats for the Ricoh Arena contest, which kicks-off at 7.45pm.

But supporters can also purchase from away turnstile five (cash only) at Coventry on the evening of the game.

Fans collecting tickets at Coventry can pick them up from the ticket office located opposite the casino. 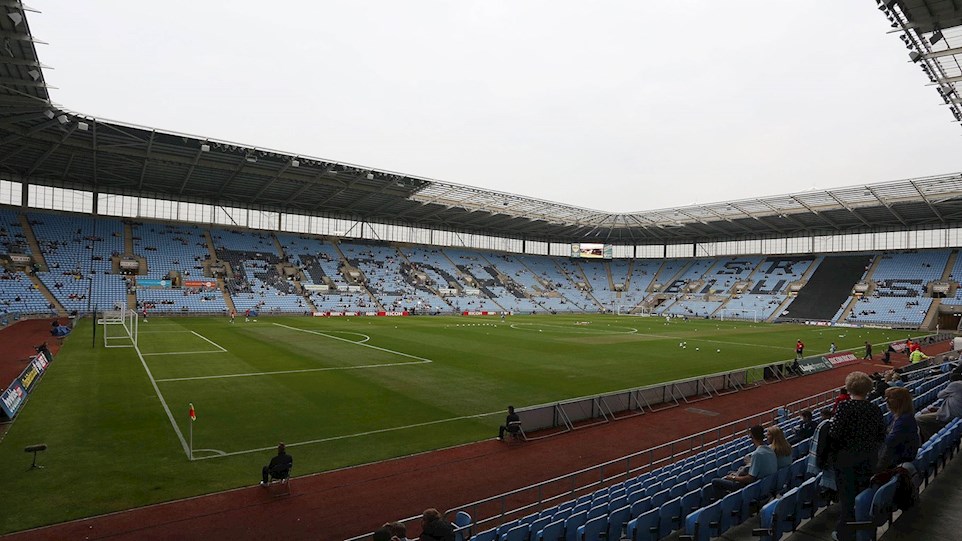 
Tickets for Pompey’s away game at Coventry go on sale next week.