Pompey welcome Burton to the south coast this evening for the first floodlit Fratton league fixture of the season.

Kenny Jackett’s side saw off Fleetwood at the weekend to extend their lead at the top of the table to six points.

But their opponents should also be in buoyant mood after twice battling from behind to secure victory at struggling Plymouth on Saturday.

First Kyle McFadzean and then Lucas Akins cancelled out Freddie Ladapo efforts, before the former grabbed a late winner – ensuring he doubled his total goal tally for the club.

But that was Albion’s first away League One success of the season, with Nigel Clough’s men securing one draw and suffering four defeats.

It leaves them sitting 14th as they look to recover from being relegated on a dramatic final day of the 2017/18 Championship campaign.

The Brewers have enjoyed more success in the Carabao Cup and reached the fourth round for the first time in their history, earning a home tie against Nottingham Forest at the end of the month.

There have been just four previous meetings between the two clubs and neither have won at Fratton Park.

Darragh Lenihan cancelled out Jed Wallace’s strike in the most recent clash, which took place in League Two in January 2015.

Former Fratton loanee Damien McCrory is also unlikely to feature after injuring his calf while warming-up for Saturday’s match at Home Park.

The gaffer chats ahead of Tuesday's match between Pompey and Burton Albion under the lights at Fratton Park.

Striker Oli Hawkins speaks exclusively to iFollow about his 50th Pompey appearance, his style of play, goals and more ahead of the Blues' midweek clash with Burton Albion under the Fratton floodlights.

TICKETS
Secure your seat online here or pay a visit to the Anson Road ticket office and remember to take advantage of our ‘Kids for a Quid’ offer.

From 5.30pm this evening, they will also be available (subject to availability) from the matchday ticket office in Frogmore Road.

The Victory Lounge behind the Fratton End is open to supporters from 5.30pm.

Please note that due to RMT industrial action, a reduced train service is running tonight, with services expected to be busier than usual. Passengers are advised to check here before they travel. 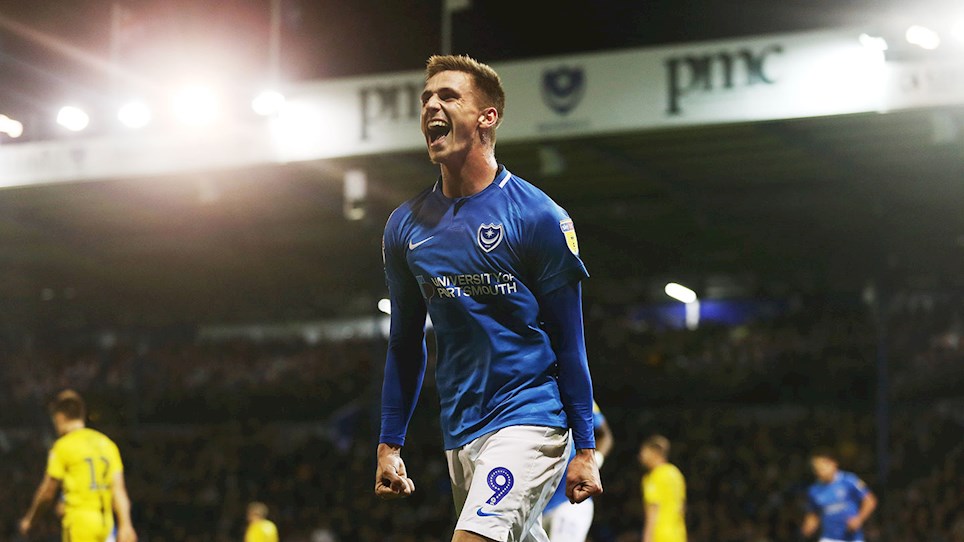 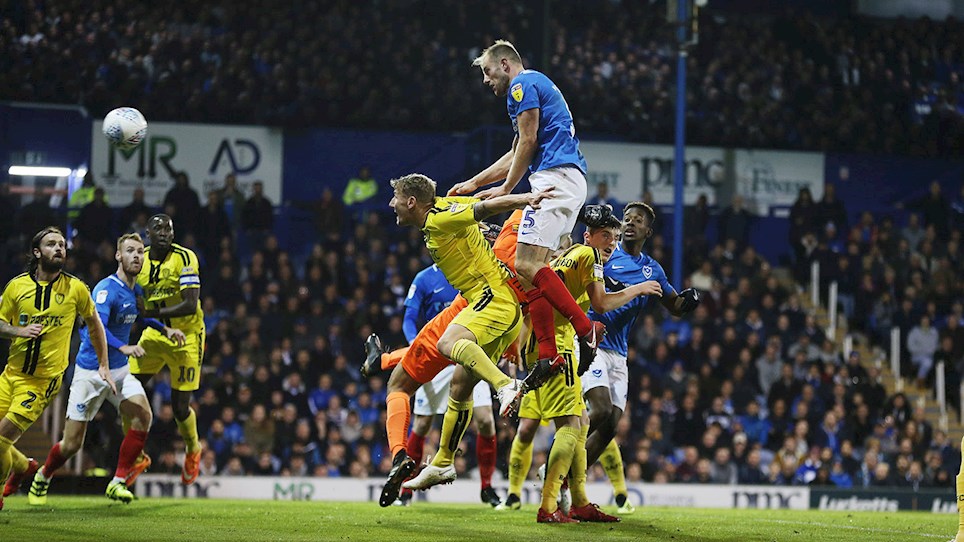 Clarke: Out Of Character


There have been plenty of assured defensive displays to help Pompey reach the League One summit. 
Kenny Jackett was unhappy with Pompey’s defending following their 2-2 draw with Burton at Fratton Park.

Pompey were forced to settle for a draw in an often breathless encounter with Burton at Fratton Park.

They looked stronger before the break and appeared comfortable after Oli Hawkins’ header had secured an interval advantage.

But Devante Cole and Jake Hesketh both netted at the start of the second half to leave the League One leaders stunned.

Matt Clarke soon nodded in an equaliser in a hectic period, although neither side was able to score again and snatch all three points.

Kenny Jackett made one change from the side that had beaten Fleetwood on home soil a few days earlier.

With Nathan Thompson’s wife having just given birth to a baby boy, Anton Walkes replaced him at right-back.

David Wheeler was named among the substitutes after recovering from an ankle problem that has kept him sidelined for the past three games.

A couple of Lee Brown crosses showed Pompey’s mentality in the opening stages, as they looked to get at their visitors.

Goalkeeper Dimitar Evtimov was then called into action for the first time, getting his fingertips to a rasping Ronan Curtis drive.

The hosts were on top and when Tom Naylor stole possession in the middle of the pitch, the midfielder picked out Ben Thompson.

His fierce drive was kept out by Evtimov and the stopper dived on the loose ball before Jamal Lowe could capitalise.

But Naylor collected a booking soon after following a late challenge on Stephen Quinn. It was his fifth league caution of the season, earning a one-match suspension.

It was a fairly quiet time for Craig MacGillivray in the Blues goal, although he came off his line to deny Jamie Allen.

Will Miller then wasted a decent opportunity by hitting a tame effort straight at the keeper after being picked out by Ben Fox.

And there was a blow for Pompey when Dion Donohue limped off with an injury, with Gareth Evans on to replace him.

It was generally proving to be a positive evening for the hosts, though, with Jack Whatmough and Evans both having half-chances.

And the Blues broke the deadlock on 36 minutes when Thompson swung in a fine cross from the right and HAWKINS charged in to head home from close range.

The closest that Albion came to levelling before the break was a shot from Kyle McFadzean, although that went out for a throw.

There was still time for another Pompey opportunity, however, and Evtimov did well to stop Lowe’s cross reaching Curtis.

But the Brewers started the second half strongly and Naylor had to slide bravely in to block Hesketh’s attempt.

The loose ball fell for Liam Boyce, however, and his shot was saved low to his left by a full-stretch MacGillivray.

An equaliser did arrive moments later, though, when Allen found Cole, who – having been brought on at the break – sent a neat finish nestling in the bottom corner.

And the Blues were left stunned on 52 minutes when Hesketh wriggled his way past a couple of challenges and hit a thunderous shot into the roof of the net.

The Fratton faithful raised the decibels to try to roar their side back into action and it seemed to have an effect.

Evans saw an effort blocked a few yards from the line, while Evtimov did well to keep out Lowe’s angled strike.

But the hosts were back on level terms on 57 minutes, with CLARKE rising highest in the box to convert an Evans corner.

Brett Pitman replaced Hawkins just past the hour mark, as Jackett opted to freshen up his forward line.

But it was Brown who had a chance to score when Lowe was brought down by Reece Hutchinson 20 yards out.

The left-back managed to send his free-kick through the wall, only for it to fly safely into the arms of Evtimov.

Pitman was then unable to make a connection with an attempted over-head kick after Whatmough’s long throw had been flicked on by Clarke.

A shot from Quinn at the other end lacked pace, but took a deflection and almost wrong-footed MacGillivray.

Both sides looked capable of scoring again, but it was Burton who almost grabbed a late winner following a quick break.

Cole tried to pick out an unmarked Lucas Akins in the box, with Naylor just about managing to intercept and MacGillivray diving on the loose ball.

Clarke: Out Of Character


There have been plenty of assured defensive displays to help Pompey reach the League One summit.


Kenny Jackett was unhappy with Pompey’s defending following their 2-2 draw with Burton at Fratton Park.

Pompey’s junior supporters will be able to watch the home clash with Burton for as little as £1.

With the Blues currently sitting at the top of the League One table, there is sure to be a fantastic atmosphere under the lights.

Seats for the Fratton fixture on Tuesday, October 23 (7.45pm kick-off) are on general sale.

And adult and senior (64+) fans can purchase up to two junior (17 and under) tickets in the same transaction for just £1 each.

Click here for a full list of ticket prices and booking charges for Pompey’s home fixtures and to find out which games are currently on sale.