Pompey have made a flying start to the League One campaign and currently set second following an unbeaten opening six fixtures.

But tonight the quest for points is in the Checkatrade Trophy, as Gillingham head to Fratton Park for the first match in Southern Group A.

The visitors began the season with successive wins over Accrington and Burton, but have not tasted success since.

They exited the Carabao Cup on penalties at Millwall, while the following four league games have yielded a solitary point.

Some context can be given, however, by the fact that they have faced the unbeaten trio of Walsall, Sunderland and Barnsley.

It leaves the Gills 12th at this early stage, as they look to improve on finishing just six points above the drop zone last term.

Both sides qualified from their 2017/18 Checkatrade Trophy group, with the Kent side going out at Oxford in the second round, while the Blues were beaten by Chelsea’s youngsters in the last 16.

It was Gillingham who came out on top in the most recent Fratton contest between the sides, securing a 3-1 victory after Jamal Lowe had given Pompey the lead.

If tonight’s game finishes all square, both sides will collect a point. A penalty shoot-out will then be held, with the victors earning a bonus point.

TEAM NEWS
Pompey are expected to make several changes from the side that convincingly beat Plymouth in the league on Saturday.

Andre Green and Joe Mason could make their debuts for the Blues having recently arrived on loan deals.

Gillingham skipper Gabriel Zakuani is out with a shoulder injury, so recent loan signing Connor Ogilivie could feature.

VIEW FROM THE DRESSING ROOM
Read the thoughts of Joe Gallen and Joe Mason or register for a free iFollow account to watch the below video.

TICKETS
Seats can still be secured online here or from the Anson Road ticket office. Please note that only the South Stand Upper and Nelson’s Family Zone are open tonight.

From 5.30pm this evening, tickets will also be available to buy from the matchday ticket office on Frogmore Road or – with cash only – outside the turnstiles.

Parking in the North Stand car park is priced just £5 for tonight’s game, with spaces allocated on a first come, first served basis.

The Victory Lounge behind the Fratton End will be open for supporters from 5pm.

MATCH COVERAGE
Supporters in the UK and Ireland can watch the game live – with commentary and graphics – as part of a new service offered by the EFL. It is priced £10 for a match pass.

BETTING
Pompey are the 8/13 favourites with Sky Bet to collect all three points, while the visitors can be backed at 17/4.

ALSO IN THE CHECKATRADE TROPHY
Kick-off 7.45pm unless stated 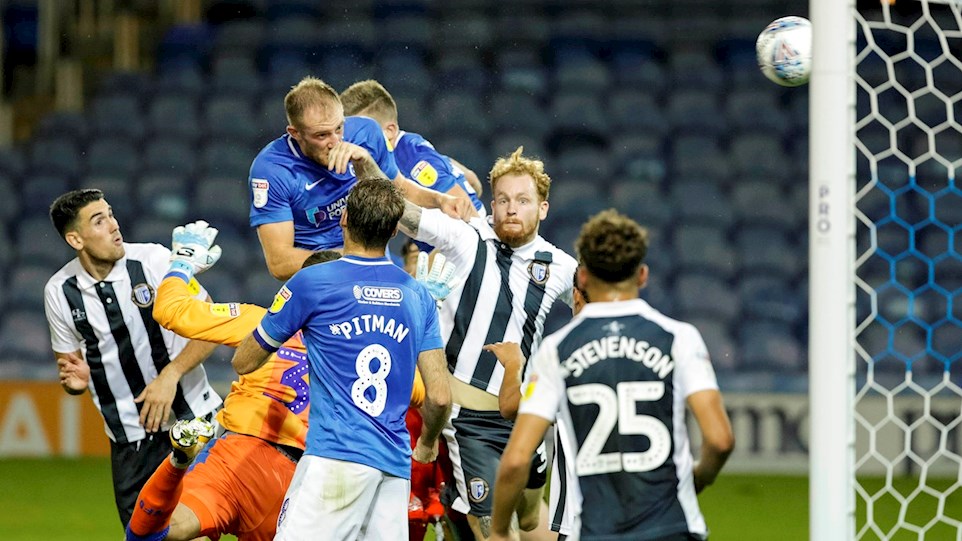 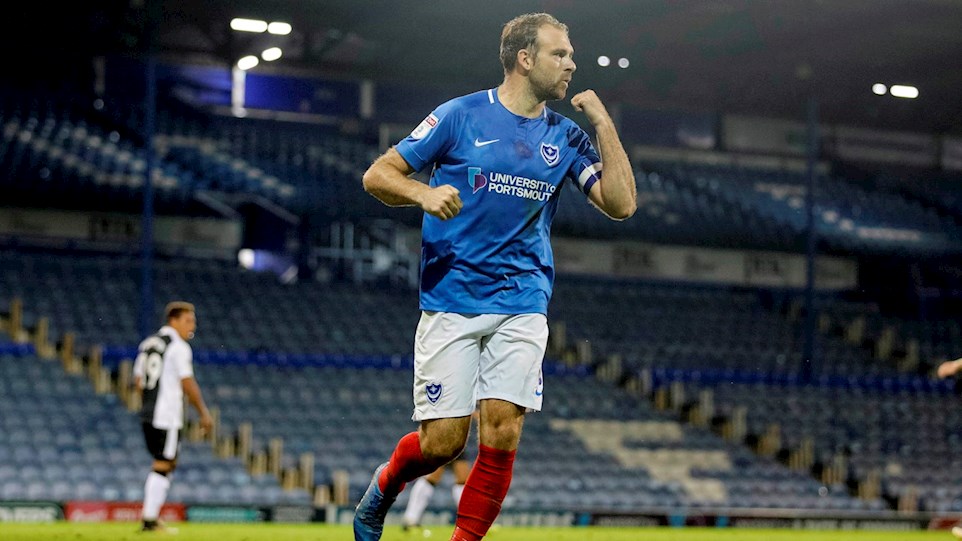 
View the photos from the Blues' convincing win at Fratton Park 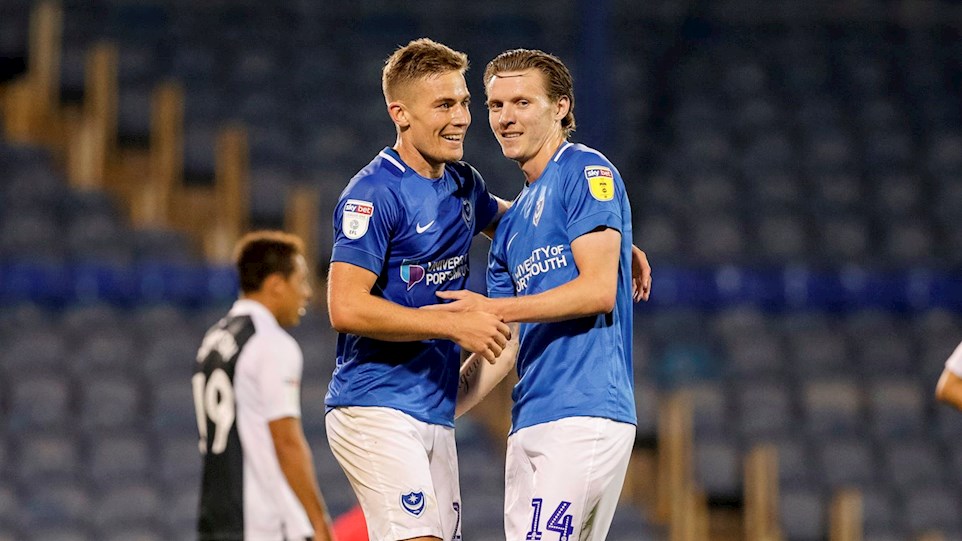 Wheeler: An Important Chance To Impress


There might have been only a little over 2,000 people inside Fratton Park to watch Pompey’s Checkatrade Trophy clash with Gillingham.

Pompey eased to victory over Gillingham in their opening Checkatrade Trophy group match at Fratton Park.

A largely uneventful first half came to life right at the end, with Matt Clarke and Ben Close finding the net in quick succession.

Brett Pitman then hammered home a penalty after the interval to erase any hopes of a Gills comeback.

And a comfortable evening was wrapped up right at the end when David Wheeler opened his Blues account.

Kenny Jackett made 10 changes from the side that comfortably saw off Plymouth in the league at the weekend.

Clarke was the only player to keep his spot, with loan sign Andre Green handed his debut in an attacking role.

Pitman reclaimed the captain’s armband up front, while fellow striker Joe Mason had to be content with a place among the substitutes.

The crowd were packed into the South Stand, but there was not too much to keep them entertained for the majority of the first half.

Pitman thundered a 30-yard free-kick against the crossbar after Wheeler had been fouled by Aaron Simpson.

But that was not typical of a listless opening period that only exploded into life just before the interval.

Neither keeper had much to deal with, although Luke McGee made a regulation save to deny Navid Nasseri.

Pompey finally moved through the gears on 41 minutes when Adam May slipped a fine pass down the line for Wheeler.

His low centre was intended for Pitman, who would have been left with a simple finish had Alex Lacey not cut the ball out.

But the deadlock was broken from the resulting corner, as CLARKE was left untroubled to convert May’s delivery.

And the celebrations from the home supporters had barely died down before the Blues doubled their advantage.

Nathan Thompson crossed from the right and although CLOSE’s first time effort lacked power, it was neatly placed into the bottom corner.

It might have been even better in stoppage-time, but a long-range effort from May flashed past the post.

There were only a few minutes on the clock when the hosts had a great chance to extend their lead further.

Wheeler whipped in a teasing cross from the right that would normally have been gobbled up by Pitman, but he fired uncharacteristically wide from a few yards out.

Pompey’s skipper made up for that, however, by opening his account for the season from the penalty spot on 55 minutes.

Alan Young pointed to the spot when Green went down under Aaron Simpson’s challenge, with PITMAN on hand to slam home from 12 yards.

Mason was introduced for his Blues bow just past the hour mark, with May the man to make way for the on-loan Wolves striker.

The tempo of the contest unsurprisingly dropped with the lead so commanding and the chances started to dry up again.

Wheeler came close to adding a fourth goal after bundling his way into the box, but Hadler came to the rescue with a decent stop.

And that is exactly what he did at the death, with WHEELER on hand to net from close range after Mason’s blocked shot had fallen into his path.


View the photos from the Blues' convincing win at Fratton Park

Wheeler: An Important Chance To Impress


There might have been only a little over 2,000 people inside Fratton Park to watch Pompey’s Checkatrade Trophy clash with Gillingham.

Tickets for Pompey’s first Checkatrade Trophy match of the season are now on sale.

Kenny Jackett’s side take on Gillingham in a group stage contest at Fratton Park on Tuesday, September 4 (7.45pm kick-off).

But supporters can also call 0345 646 1898 or pay a visit to the new Anson Road ticket office, with parking available behind the North Stand.

Please note that only the South Stand Upper and Nelson’s Family Zone will be open for this fixture, while season ticket holders’ seats are not reserved.

In the Checkatrade Trophy, a penalty shoot-out is held if a group stage match finishes in a draw, with the winner gaining a bonus point.

Pompey also have matches away to Crawley (Tuesday, October 9) and at home to Tottenham’s under-21 side (Tuesday, November 13).