For the second league game in succession, Pompey are preparing to face a side that have not tasted success this season.

Shrewsbury are currently only being kept off the foot of the table by last week’s vanquished Fratton visitors Plymouth.

Having narrowly missed out on automatic promotion last term and then lost at Wembley in the play-off final, the Shropshire side underwent drastic changes.

Manager Paul Hurst left for Ipswich and took star players Jon Nolan and Toto Nsiala with him to the Championship.

There have been several other departures, including, of course, goalkeeper Craig MacGillivray’s move to the Blues.

New boss John Askey has so far overseen two draws and four defeats in League One, although they have not been beaten by more than a single goal.

The Shrews can take heart from the fact that they have won each of the past five meetings between the teams.

But Pompey will be hoping to end that unwanted record as they chase a fourth successive home league win – something they have not done at the start of a season in 16 years.

TEAM NEWS
Pompey will be without the injured duo of Anton Walkes (groin) and Jack Whatmough (hamstring), but Oli Hawkins (hamstring) could be available.

Top scorer Ronan Curtis also misses out, as he is away on international duty with Republic of Ireland under-21s.

James Bolton (hamstring) and Abo Eisa (knee) will be absent for Shrewsbury, but Josh Emmanuel could make his debut.

TICKETS
Seats can be bought online here or from the Anson Road ticket office.

On the day of the game, they can be bought (subject to availability) from both ticket offices from 9am, with collections available from main reception.

Parking behind the North Stand is priced £10 per car and available on a first come, first served basis.

The Victory Bar behind the Fratton End will be open for supporters from 12pm.

MATCH COVERAGE
Because the game takes place during an international week, supporters in the UK and Ireland can watch the action live, with commentary and graphics. It is priced £10 for a match pass.

BETING
Pompey are the 10/11 favourites with Sky Bet to secure all three points, while the visitors can be backed at 16/5. 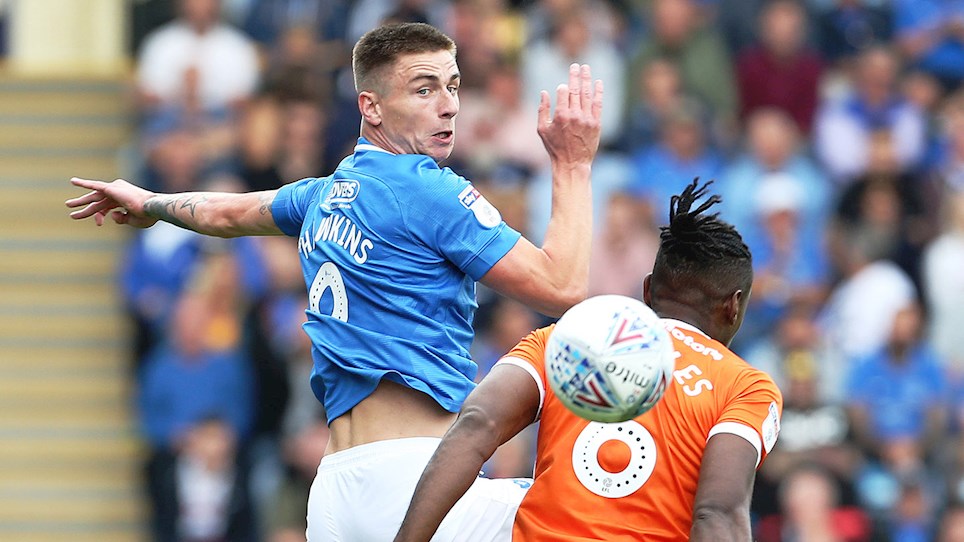 
Oli Hawkins has certainly had a pivotal role for Pompey so far this season. 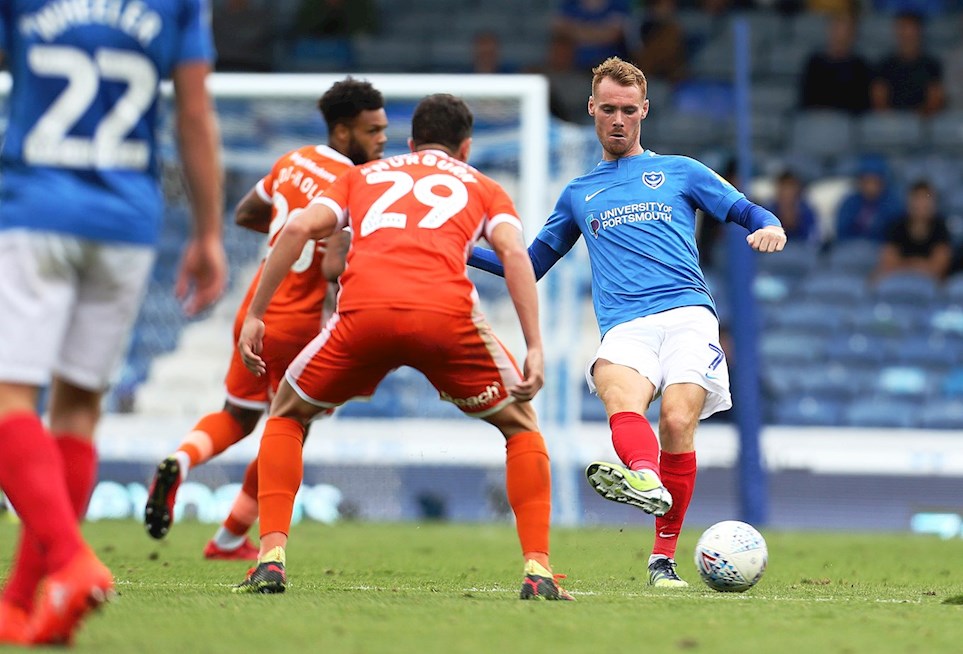 Naylor: There Will Be Tough Times


Tom Naylor says that Pompey cannot expect to blow teams away every week. 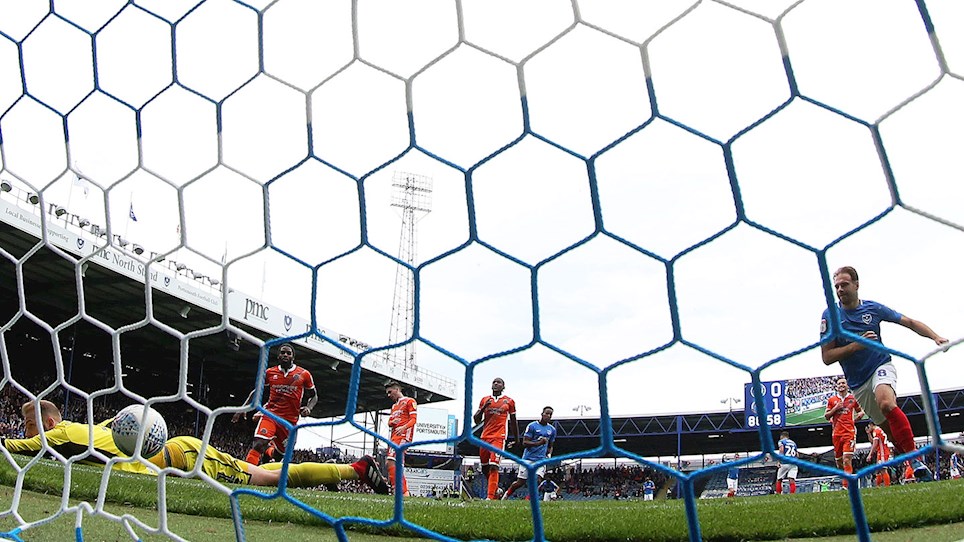 Brett Pitman came off the bench to net a penalty and ensure Pompey’s unbeaten start to the League One campaign continued.

The first half was a largely drab affair, although the hosts did improve markedly following the interval.

It looked like a first defeat was on the cards when Greg Docherty took advantage of some sloppy defending to give Shrewsbury the lead.

But – much to the relief of the Fratton faithful – Pitman kept his cool from the spot to secure a share of the spoils.

Kenny Jackett made three changes from the side that comfortably saw off Plymouth the previous week.

With Ronan Curtis away on international duty, Andre Green was handed his league debut wide on the left.

There were also a couple of enforced switches at the back, with Christian Burgess and Nathan Thompson replacing the injured Jack Whatmough and Anton Walkes.

The Blues had got off to a flying start against Argyle, but it was flat opening 45 minutes against the struggling Shrews.

That did not look like being the case when Jamal Lowe’s shot was tipped around the post by Joel Coleman in the early stages.

But that was not a portent of what was to come, with the remainder of the half being a fairly lifeless affair.

Indeed, it was Shrewsbury who looked more likely to break the deadlock, without really being able to test Craig MacGillivray between the sticks.

Lenell John-Lewis could not connect with Shaun Whalley’s teasing delivery at the back post, while a drive from Omar Beckles was not too far off target.

And John-Lewis had another decent opportunity after Ollie Norburn had dispossessed Tom Naylor, only to fire high over the bar.

Christian Burgess had to make a timely challenge inside the box on 42 minutes to stop Josh Laurent getting a shot away.

But the visitors’ best chance came just before the break, as Anthony Grant turned neatly and fired inches past the post.

Jackett made a double switch at the start of the second half, as Green and Ben Thompson made way for David Wheeler and Ben Close.

The former won a free-kick after being fouled by Mat Sadler just after the restart, with Gareth Evans’ effort pushed clear by the diving Coleman.

It was much better from the Blues and a corner from Evans caused problems, while Wheeler was unable to beat Coleman at the keeper’s near post.

The visitors thought they should have been awarded a penalty just past the hour mark after Alex Gilliead had cut through the home defence.

He went down under Lee Brown’s challenge and cried foul, but referee Charles Breakspear was not interested.

And Brown then had an ambitious shot from 30 yards that fizzed narrowly wide, amidst anguished cries from the crowd.

They went even closer when Evans met Nathan Thompson’s cross with a firm header that Coleman just about managed to push clear.

Pompey’s final change came on 67 minutes, as the hard-working Hawkins was withdrawn for Pitman.

The hosts had looked much more of a threat since the restart, but it was the Shrews celebrating a goal on 74 minutes.

Burgess was unable to clear a cross from Whalley and Docherty – who had only come on a few seconds earlier – took advantage to lash the ball into the net.

The Blues tried to hit back and thought they should have been awarded a penalty when Pitman went down on 81 minutes.

Josh Emmanuel certainly had his hands on the striker, but Breakspear waved away the noisy appeals from players and fans alike.

The referee did point to the spot soon after, though, when Gilliead brought down Nathan Thompson in the box.

It was the linesman who flagged, although Breakspear took a while to make his mind up before awarding the penalty.

PITMAN stepped up to take it and although Coleman went the right way, the ball nestled in the bottom corner.

Five minutes of stoppage-time meant there were even hopes raised for a dramatic winner, but the Blues were unable to strike again.


Oli Hawkins has certainly had a pivotal role for Pompey so far this season.

Naylor: There Will Be Tough Times


Tom Naylor says that Pompey cannot expect to blow teams away every week.