Pompey will try to protect League One’s only unbeaten record when Wycombe visit the south coast on Saturday.

In fact, there are only a total of seven clubs in the top four divisions of English football – including Chelsea, Liverpool, Manchester City, Leeds, Forest Green and MK Dons – who have yet to taste defeat.

That fine start to the season means that it is the Blues who are now sitting proudly at the third tier summit.

Their next opponents are down in 19th, having only secured one league victory from the opening eight fixtures.

They have drawn four of those, however, and also enjoyed success in both the Carabao Cup and Checkatrade Trophy.

Gareth Ainsworth led the Chairboys to automatic promotion last term, bringing to an end their six-season stay in the basement.

Pompey triumphed 4-2 when the sides last met in a league encounter at Fratton Park, en route to securing the title.

But it was Wanderers who had the edge during that 2016/17 campaign, with victory in the return fixture and also in an FA Cup clash.

TEAM NEWS
Anton Walkes and Jack Whatmough are both available again following spells on the sideline, while Ronan Curtis is fine after limping off at the end of last Saturday’s match at Peterborough.

But Andre Green is unavailable after undergoing a minor operation on his knee this week to remove a cyst.

The visitors will be without defenders Adam El-Abd (thigh) and Anthony Stewart (hamstring), as well as forward Nathan Tyson (hamstring).

VIEW FROM THE DRESSING ROOM
Read the thoughts of Kenny Jackett and Christian Burgess or register for a free iFollow account to watch the below videos.

TICKETS
Seats are still available, although spaces are extremely limited in all areas except the Milton End. Click here to buy online or visit the ticket office.

Subject to availability, they will be available from both tickets offices (Anson Road and Frogmore Road) from 9am on Saturday.

BETTING
Pompey are the 7/10 favourites with Sky Bet to secure all three points, while the visitors can be backed at 4/1. 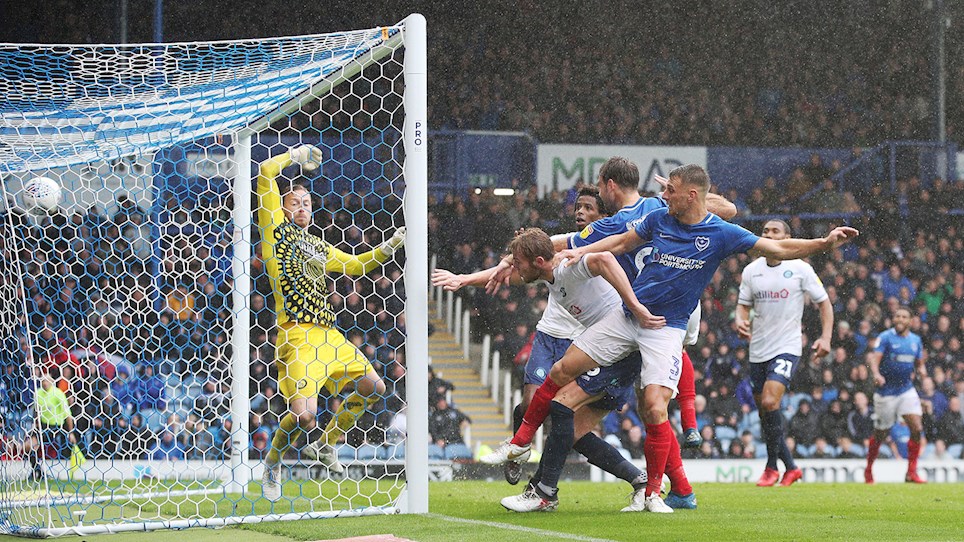 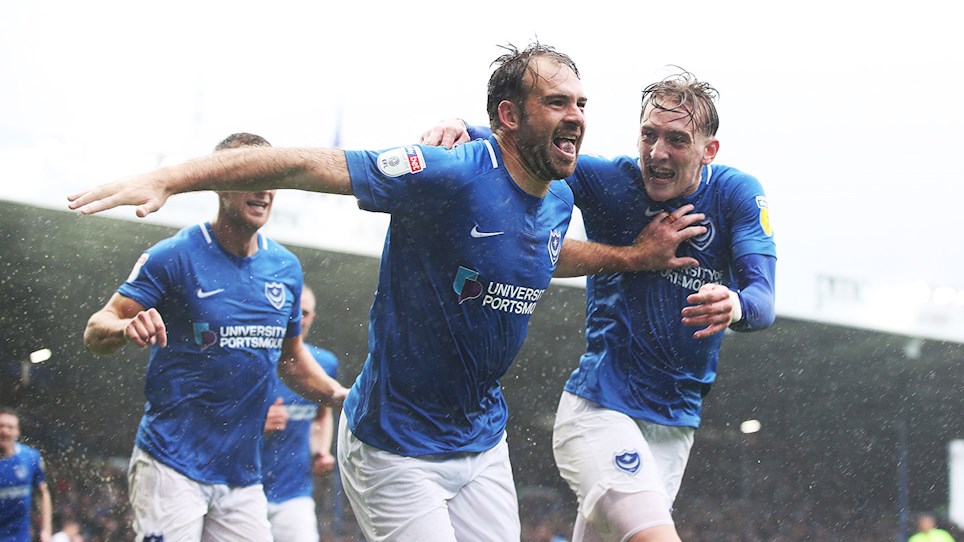 
View the photo gallery from the Blues' draw at Fratton Park


The mood was naturally downbeat after a late penalty denied Pompey a win over Wycombe.

Pompey remain unbeaten in League One, but a late penalty denied them all three points at a sodden Fratton Park.

The hosts trailed to a Bryn Morris strike at the interval, although they emerged much stronger after the break.

Gareth Evans nodded them back on level terms and Brett Pitman came off the bench to turn the game on its head.

But with another victory looking likely for the Blues, Joe Jacobson struck from the spot to ensure it finished all square and the hosts dropped to second.

Kenny Jackett stuck with the same side that beat Peterborough the previous week to climb to the League One summit.

With the rain pouring relentlessly down, conditions were not exactly conducive to an attractive contest.

There was plenty of slipping and sliding the opening stages and a niggly game was not helped by the eagerness of referee Craig Hicks to use his whistle.

A centre from Jamal Lowe was inexplicably left by defender Darius Charles, only for Sido Jombati to hack clear from the line.

Christian Burgess then met a corner from Evans, with his firm header punched clear by former Fratton loanee Ryan Allsop.

Craig MacGillivray comfortably claimed Adabayo Akinfenwa’s effort at the other end, but did not deal with Jacobson’s free-kick soon after and watched gratefully on as Fred Onyedinma slot narrowly wide.

And it was Wycombe who broke the deadlock midway through the first, with Morris playing a neat one-two with Akinfenwa before curling home a fine finish.

The Chairboys were obviously keen to protect their lead, but it seemed a bit too early for time-wasting and Allsop got a talking to from Hicks.

Wanderers were guilty of some crude challenges and saw four players carded before the break, including one for Onyedinma for the most obvious shirt pull you could hope to see.

The hosts did improve as the interval approached, although Burgess could not quite adjust his body enough to capitalise on Tom Naylor’s flick.

It was Naylor who almost forced an equaliser when he met Lowe’s pass, although the ball would not quite squeeze through Allsop’s legs.

Wycombe were first to have an opening when the action restart, with Matt Bloomfield’s strike hitting team-mate Scott Kashket and ballooning over.

With Pompey struggling to find a way through, Jackett was preparing to bring on Pitman and Joe Mason.

But the pair were promptly sent to warm-up again after EVANS headed the hosts back on level terms.

Oli Hawkins won a long punt up the pitch by MacGillivray and played the ball to Lowe, whose fine delivery was nodded in by the skipper from close range.

Both teams then had a decent opportunity to forge ahead in the space of just a few seconds, with the Chairboys first to go close.

Morris sent the ball into the box and Akinfenwa should really have done better then divert the ball wide from a few yards out.

Pompey went straight up the other end and Lowe raced clear, only for his shot to be diverted wide by Allsop.

Pitman was finally introduced on 69 minutes, with Hawkins given a warm ovation as he departed the action.

Hicks was continuing to infuriate both sides by blowing his whistle every time a player hit the turf, despite the difficult conditions.

One soft free-kick for an alleged foul by Ben Close was fired narrowly past the post by the lively Morris.

Nathan Thompson then narrowly missed the target from close range, while Pitman’s cut-back hit a defender and went agonisingly behind the waiting Mason.

But PITMAN did give the Blues the lead on 86 minutes, rising at the far post to convert another fine Lowe cross.

An action-packed half swung back the other way moments later, however, when Burgess was penalised for a foul on Onyedimna in the box.

Hicks pointed straight to the spot and Jacobson slammed his penalty straight down the middle to draw Wycombe level.

There were five minutes of added time for either side to find a winner, but substitute Mason was denied late appeals for a foul in the box and the spoils were shared.


View the photo gallery from the Blues' draw at Fratton Park


The mood was naturally downbeat after a late penalty denied Pompey a win over Wycombe.