Pompey have to put derby thoughts to the back of their minds and focus on trying to find some consistency in the league.

They now travel to face a Blackpool outfit who have yet to taste defeat in the third tier so far this season.

Simon Grayson’s men have won three games and drawn twice, ensuring they are among a clutch of five sides on 11 points at the top of the table.

That includes home victories over Bristol Rovers and Oxford, meaning the Blues will be looking to become the first club to leave Bloomfield Road with all three points.

Their only loss came against Macclesfield in the Carabao Cup – and even then they were only seen off on penalties.

Pompey have won on each of their past two visits to Blackpool turf, with Ronan Curtis netting twice in a 2-1 triumph last term.

But there should be more people inside the stadium this time around, with Seasiders fans ending their boycott following the welcome removal of the Oyston family from the boardroom.

Their side have finished mid-table in each of the two campaigns since being promoted back to League One – and will now be looking to secure Championship football for the first time since 2015.

TEAM NEWS
James Bolton (ankle), Oli Hawkins (foot) and Ryan Williams (quad) are all back in training, but none are likely to feature on Saturday.

Bryn Morris (groin) and Jack Whatmough (knee) are the only other first team players currently sidelined.

Blackpool do not have many fitness concerns, although there are doubts over Nathan Delfouneso (hamstring) and Matty Virtue (thigh).

TICKETS
Pompey fans can buy tickets from the cash turnstiles at Blackpool on Saturday. Click here for more details.

MATCH COVERAGE
Domestic iFollow subscribers can listen to live commentary from Andrew Moon and Liam Lawrence by signing into their account and visiting the match centre from 2pm on Saturday.

BETTING
Pompey are the 13/10 favourites with Sky Bet to secure all three points, while the hosts can be backed at 2/1. 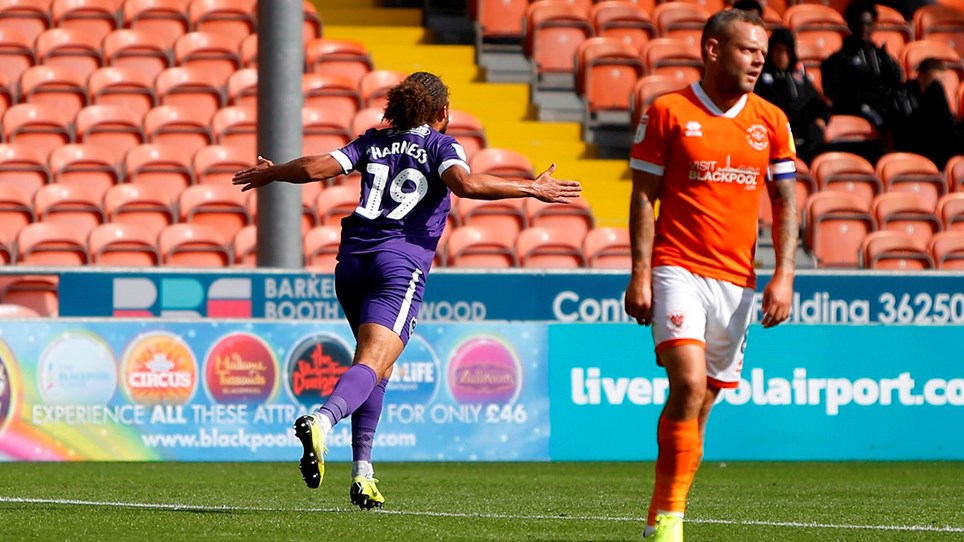 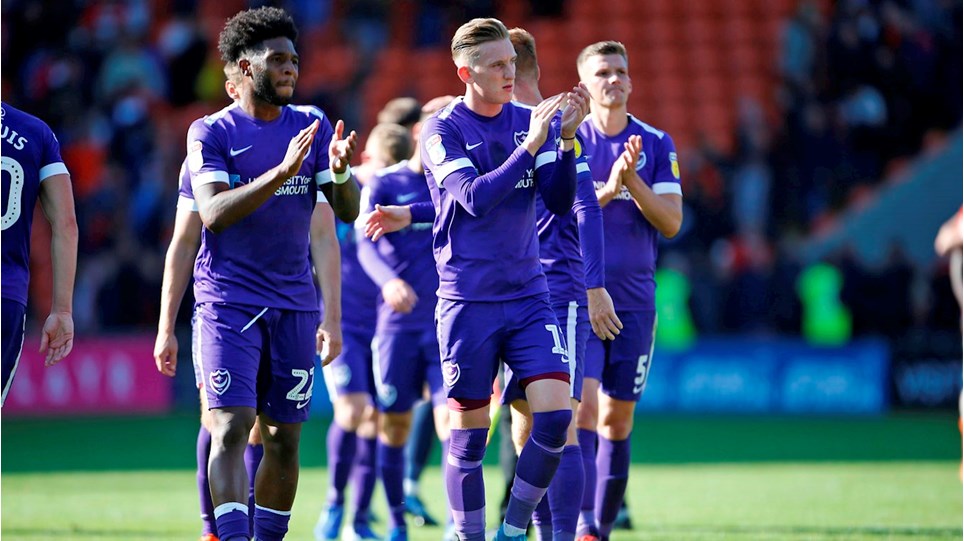 
Pompey had to settle for a share of the spoils against Blackpool at Bloomfield Road. 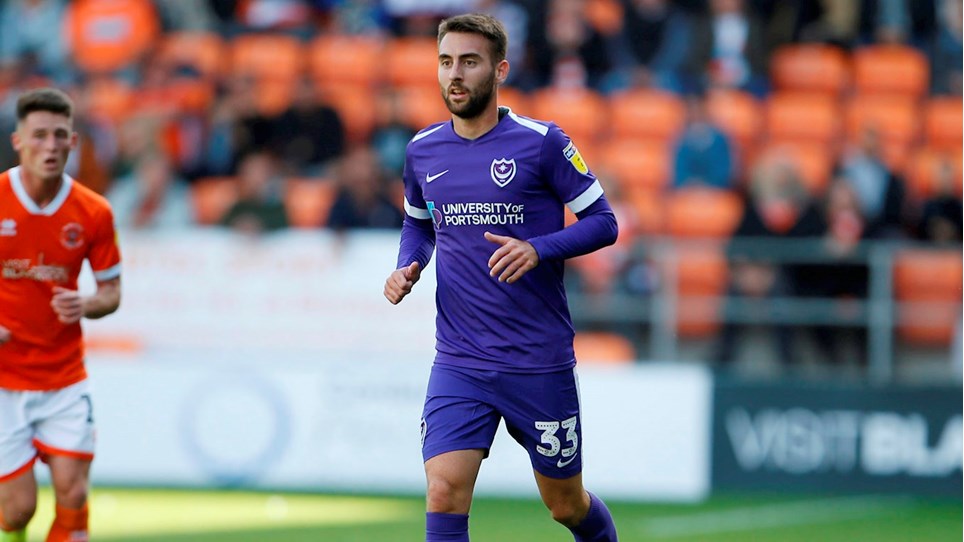 
It was the proverbial game of two halves between Blackpool and Pompey at Bloomfield Road. Jackett: Fans Backed Us Throughout


A third goal of the season for Marcus Harness ensured that Pompey deservedly led at the interval against Blackpool.

Pompey had to settle for a share of the spoils at Blackpool, despite Marcus Harness netting his third goal for the club.

The visitors improved as the first half progressed and deservedly went ahead through the winger’s neat finish.

But the Seasiders were much better following the interval and Armand Gnaduillet’s header ensured they claimed a point.

There were chances for both sides to grab a winner after that, with Gnanduillet and John Marquis going close for their respective clubs.

Kenny Jackett made one change from the side that won at QPR in the Carabao Cup earlier in the week.

It was a straight swap, as Andy Cannon replaced Gareth Evans in midfield, with Tom Naylor taking the captain’s armband.

The latter remained stationed in the centre of defence, as Christian Burgess continued in a right-back role.

It was a blustery day in the north-west and the windy conditions were clearly making life difficult for both sides.

But Blackpool started brightly and delivered plenty of early crosses that had to be dealt with by the Blues back-line.

Paul Downing conceded a foul in a dangerous position and took responsibility by heading behind the resulting free-kick.

The visitors soon started to move through the gears and Ronan Curtis had a shot blocked before sending in a ball that was just out of reach for the diving Marquis.

Some neat Harness footwork and sheer persistence from Andy Cannon then provided a chance for the latter, who prodded wide.

Blackpool threatened at the other end, with Sullay Kaikai sliding in and not quite able to meet James Husband’s pass.

But it was Pompey who broke the deadlock on 17 minutes after Marquis had done well to catch Curtis Tilt in possession.

Ryan Edwards made a good recovery challenge on the striker, only for the ball to land for HARNESS to flight home with his left foot.

The visitors looked well on top and Marquis soon had a shot deflected narrowly wide after racing through.

A cross from Ross McCrorie was then just behind Harness, who could not get enough power on his header to trouble Jak Alnwick in the Blackpool goal.

Both sides picked up a booking each, with McCrorie penalised for a foul on Kaikai, while Edwards was punished for a cynical tug on Marquis.

There was a scare for Pompey when the former collided with Tilt and fell into the advertising hoardings, but the Scottish midfielder was able to continue.

It was Harness who was replaced just before the break, however, with the winger appearing to limp off, despite not collecting any obvious injury.

Both sides took time to get back up to full speed following the restart, with a few loose passes halting any attacking fluidity.

Burgess had to make a key challenge inside the box on 54 minutes to prevent Gnanduillet from getting a shot away.

There were half chances at each end for Kaikai and Marquis, but neither keeper was being given much to do.

Blackpool found themselves level just before the hour mark, however, as Liam Feeney’s fine cross was converted by a firm Gnanduillet header.

And the striker almost scored a second moments later after meeting Husband’s centre, but Naylor and Craig MacGillivray combined to divert the ball behind.

Pompey were under pressure and Jackett made his second switch on 65 minutes, with earlier substitute Evans replaced by Ellis Harrison.

The hosts were causing plenty of problems and after one corner had been turned behind, a second was headed just past the post by the dangerous Gnanduillet.

It was then the Blues’ turn to go close to taking the lead on 70 minutes following good work down the left by Curtis.

He cut inside and found Cannon and after the midfielder’s blocked attempt fell for Marquis, his shot was kept out by a fine Alnwick save.

Pompey’s final change came in the centre of midfield on 76 minutes, with Anton Walkes on for McCrorie.

So it was a worrying sight to see Curtis hobbling along after picking up a knock, although the winger was fine to continue following some treatment on the pitch.

He soon collected a threaded pass from Naylor and advanced towards goal, flashing in a dangerous cross-shot that flashed past the post.

Both sides were looking capable of scoring the goal that would turn one point into three, but ultimately had to settle for a draw.


Pompey had to settle for a share of the spoils against Blackpool at Bloomfield Road.


It was the proverbial game of two halves between Blackpool and Pompey at Bloomfield Road.

Jackett: Fans Backed Us Throughout


A third goal of the season for Marcus Harness ensured that Pompey deservedly led at the interval against Blackpool.

Around 1,700 seats have already been snapped up for the Bloomfield Road contest, which kicks-off at 3pm.

But supporters can also buy tickets from the cash turnstiles at Blackpool on the day of the game. Collections will be from the South Stand ticket office.

*Supporters under the age of 14 must be accompanied by an adult. Under 2s are not permitted.


Tickets for Pompey’s visit to Blackpool go on sale next week.