Pompey put their League One hopes to one side this evening, as they turn their attention to the Carabao Cup.

Kenny Jackett’s side are hosting Championship opposition in Birmingham and trying to reach the second round for the first time since 2015.

They were beaten on home soil by AFC Wimbledon at this stage last year, which came off the back of defeats to Cardiff and Coventry in each of the previous two seasons.

The visitors also made an early exit 12 months ago, as they were knocked out by fellow second tier side Reading.

Birmingham won the competition back in 2011, when they shocked Arsenal at Wembley to lift the trophy for a second time.

And they got off to a good start in the league this term, with Kristian Pedersen’s early goal enough to secure all three points at Brentford on Saturday.

The sides have never previously met in the EFL Cup, although Pompey did win an FA Cup contest on their way to the final in 2010.

Chris Maguire, David Norris, Kelvin Etuhu and Mark Futacs were all on target in a 4-1 victory for the Blues when they last clashed with Birmingham in a Championship fixture in 2012.

Should tonight’s tie finish all square after 90 minutes, it will go straight to penalties, with no extra-time.

TEAM NEWS
Pompey are set to play a strong side, although will be without the suspended Ross McCrorie following the midfielder’s red card at Shrewsbury.

Maikel Kieftenbeld has been sidelined for Birmingham since April with a knee problem, while Cheick Keita (hamstring) is also a doubt.

VIEW FROM THE DRESSING ROOM
Read the thoughts of Kenny Jackett and Ben Close or register for a free iFollow account to watch the below video.

Due to the match being televised live on Sky Sports, there will be fewer than 100 car parking spaces available for fans behind the North Stand. These are priced £10 each and allocated on a first come, first served basis.

The Victory Bar will be open to fans from 5.30pm this evening.

BETTING
Pompey are the 5/4 favourites with Sky Bet to win inside 90 minutes, while the visitors can be backed at 15/8.

ALSO IN CARABAO CUP ROUND ONE
Games kick-off at 7.45pm unless stated


Pompey were at their clinical best to see off Birmingham and reach the second round of the Carabao Cup. 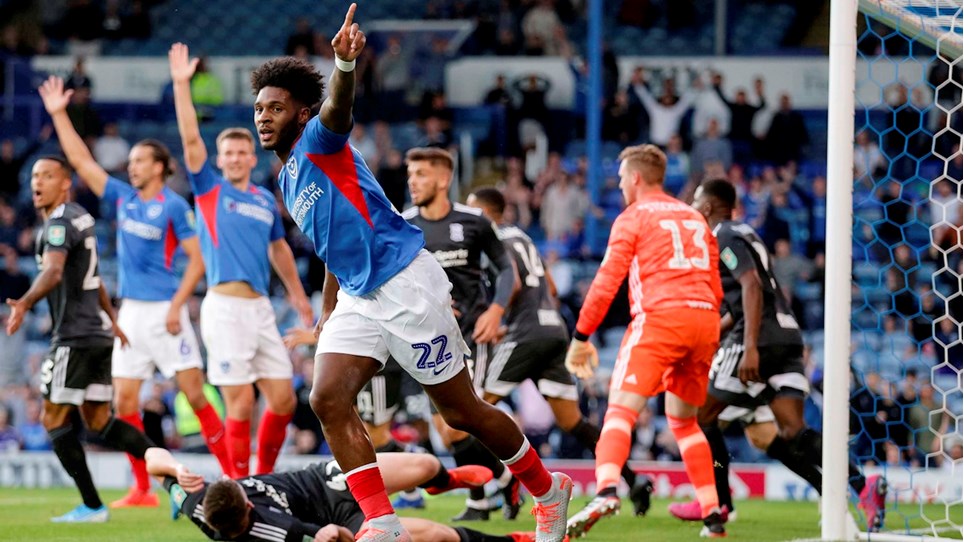 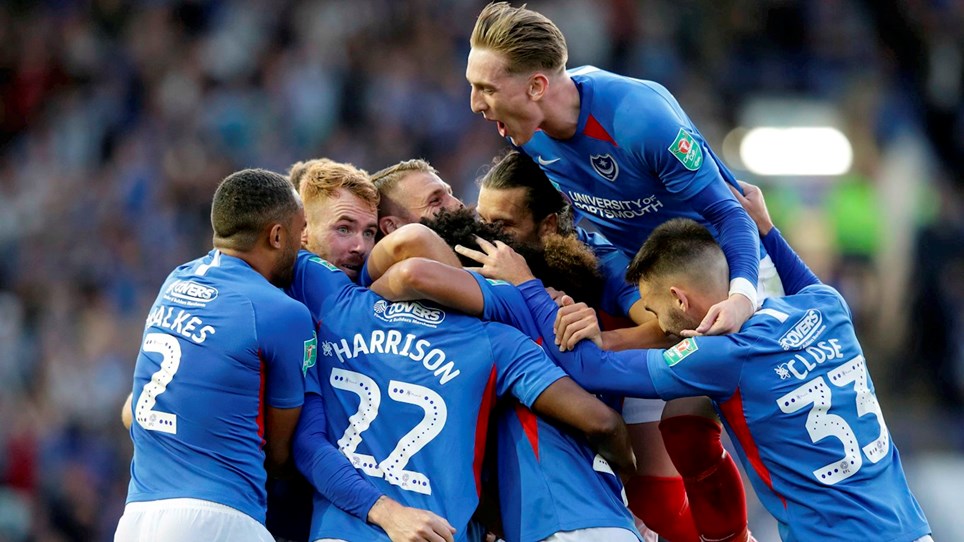 
Pompey saw off Birmingham to book their place in the second round of the Carabao Cup.


Ellis Harrison is up and running for Pompey following his summer switch from Ipswich.

Pompey eased into the second round of the Carabao Cup with a dominant display against Birmingham at Fratton Park.

Ellis Harrison headed in his first goals since arriving from Ipswich, with a fine strike from Ben Close sandwiched between.

It was a similar tale to Saturday’s League One game at Shrewsbury on Saturday in terms of the way the Blues dominated the play.

But this time they also managed to find a cutting edge, creating plenty of chances to put their higher-ranked opponents to the sword.

Kenny Jackett made three changes from the side that were narrowly beaten at New Meadow at the weekend.

Harrison made his full debut in place of fellow summer signing John Marquis, whose partner was about to give birth.

Close replaced the suspended Ross McCrorie in midfield, while Gareth Evans dropped to the bench to make way for Andy Cannon.

Pompey made a bright start against a much-changed Birmingham side and Marcus Harness’ cross had to be hacked behind by Geraldo Bajrami before it could reach Harrison.

There were not an abundance of clear-cut chances, but the hosts certainly looked the more dangerous of the two teams in the early stages.

Their opponents did have an opportunity to break the deadlock on 16 minutes, however, when Ronan Curtis attempted to clear a corner and sliced the ball straight up into the air.

It landed right in front of the goal and there was an almighty scramble before the ball was hacked to safety.

But much of the action was taking place at the opposite end of the pitch and a series of corners eventually led to the opening goal.

The first couple of deliveries were nervously dealt with by the visitors, but it proved to be third time lucky.

It eventually found skipper Tom Naylor and his header was blocked by Steve Seddon, only for the ball to fall for HARRISON.

Wes Harding tried his best to punt the ball away before it crossed the line, but referee Neil Hair decided to award the goal.

Birmingham almost found an immediate leveller, though, and a shot from Jude Bellingham was well saved by an otherwise underworked Craig MacGillivray.

Harrison then clashed with Bajrami right in front of the North Stand, leading to a melee that ultimately saw both players booked.

Pompey were still on top and deservedly doubled their advantage thanks to a sumptuous strike on 39 minutes.

An effort from Curtis was blocked by Jake Clarke-Salter and the ball fell kindly for CLOSE to unleash a fine volley that flew into the net.

They almost had a third goal in stoppage-time following a quick break up the pitch, but Curtis’ drive flashed narrowly past the post.

The Blues remained in control once the action restarted, although Curtis was unable to glance Harness’ cross on target.

A third goal did arrive on 54 minutes, however, as Curtis whipped in a pin-point cross for HARRISON to nod home at the back post.

It might have got worse for the visitors, but Hair decided to be lenient with Bajrami – who had already been booked – following a late challenge on Harrison.

Pompey were looking to add to their already impressive tally and were almost rewarded after some fine footwork from Harness and Close.

The move looked to have broken down, but the visitors could not clear their lines and Close teed-up Harrison for a hat-trick attempt.

Stockdale came to Birmingham’s rescue with a smart stop and Lee Brown could only lash the loose ball into the side netting.

The hosts were putting in plenty of effort all over the pitch and Naylor threw himself in the path of Steve Seddon’s shot, with Odin Bailey then firing over.

Jackett made a couple of changes on 77 minutes, with Harrison and Brown withdrawn for Brett Pitman and Brandon Haunstrup.

Brum came close to reducing their deficit soon after, but MacGillivray was equal to Gary Gardner’s thunderous 35-yard free-kick.

Sean Raggett was brought on for Paul Downing for the final few minutes, giving the on-loan defender his competitive Blues debut.

And Pompey passed the ball around comfortably in the closing stages, although another long-range attempt from Gardner had to be pushed over by MacGillivray.

The hosts had long since got the job done, though, and can look forward to a first trip to the second round of the competition since 2015.


Pompey were at their clinical best to see off Birmingham and reach the second round of the Carabao Cup.


Pompey saw off Birmingham to book their place in the second round of the Carabao Cup.


Ellis Harrison is up and running for Pompey following his summer switch from Ipswich.

Pompey strongly advise all supporters to purchase tickets for tonight's Carabao Cup clash with Birmingham in advance and arrive early to avoid queues ahead of kick-off.

Supporters yet to secure their match tickets can do so online here or by visiting the Anson Road ticket office.

From 5pm this evening, they can also be bought from the Frogmore Road ticket office.

Supporters who have opted to collect tickets can pick them up from the Anson Road ticket office until 5pm tonight. After this time, collections will be available from the Frogmore Road ticket collection windows.

Due to the match being televised live on Sky Sports, there will be fewer than 100 car parking spaces available for fans behind the North Stand. These are priced at £10 each and allocated on a first-come, first-served basis.

Please note that the Victory Bar will also be open to fans from 5.30 pm this evening. 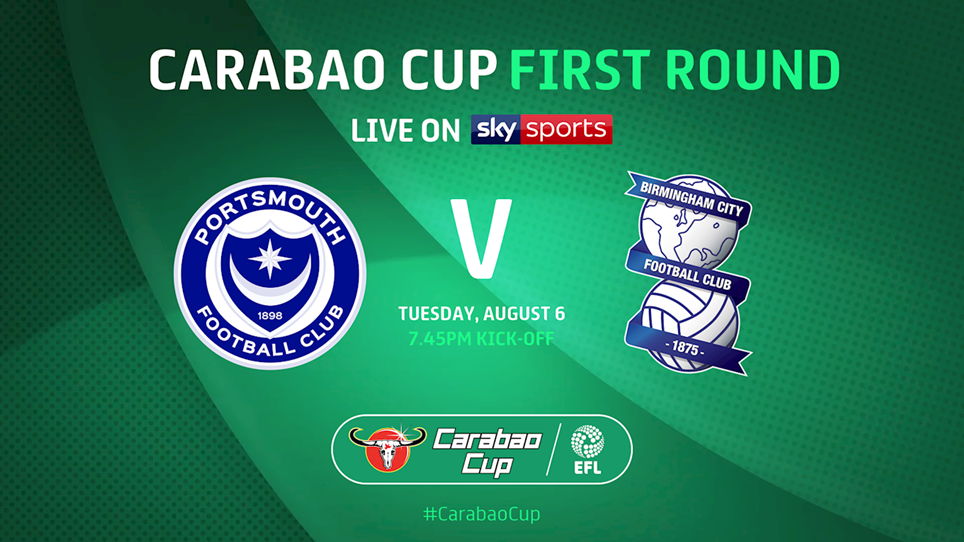 
Tickets for Pompey’s Carabao Cup clash with Birmingham go on sale from next week.