It truly is the most wonderful time of the year.

No, forget about Christmas. The start of the new season is what excites football fans up and down the country.

Pompey begin on the road for the first time in five years, making the trip to Shropshire to take on Shrewsbury.

The hosts have had wildly fluctuation fortunes in each of the past two seasons, narrowly missing out on automatic promotion before suffering play-off heartache in 2017/18.

They followed that up by finishing 18th – just two points above the drop zone – last term and only securing survival on the penultimate day.

It means that the Shrews will be competing in League One for a fifth successive campaign, having climbed out of the basement in 2015.

His team completed their pre-season schedule with a home win over Scottish side Dundee United, having earlier lost to Newport and Aston Villa, and drawn with Cheltenham.

Goals from Ben Close and Brett Pitman secured a 2-0 win for Pompey in last season’s corresponding fixture, with the sides earlier playing out a 1-1 draw at Fratton Park.

Veteran striker Steve Morison is one of several summer signings who could make his debut for Shrewsbury.

Lenell John-Lewis, Ollie Norburn and Ryan Sears all miss out for the hosts with knee problems, while Anthony Grant is training with the youth team for ‘in-house reasons’.

TICKETS
Pompey have sold their full allocation of tickets for this fixture and no more will be available to buy on the day of the game.

BETTING
Pompey are the evens favourites with Sky Bet to secure all three points, while the hosts can be backed at 13/5.

ALSO IN LEAGUE ONE
All matches kick-off at 3pm 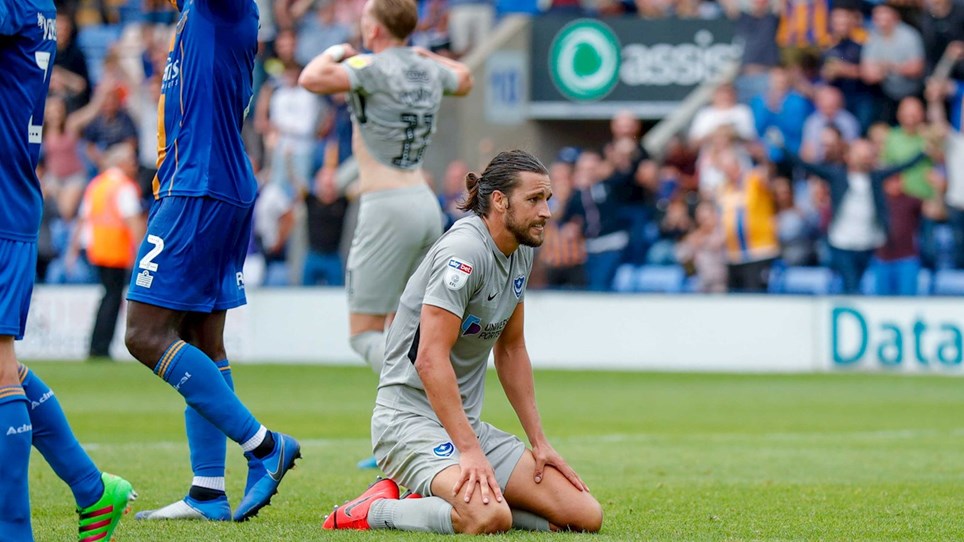 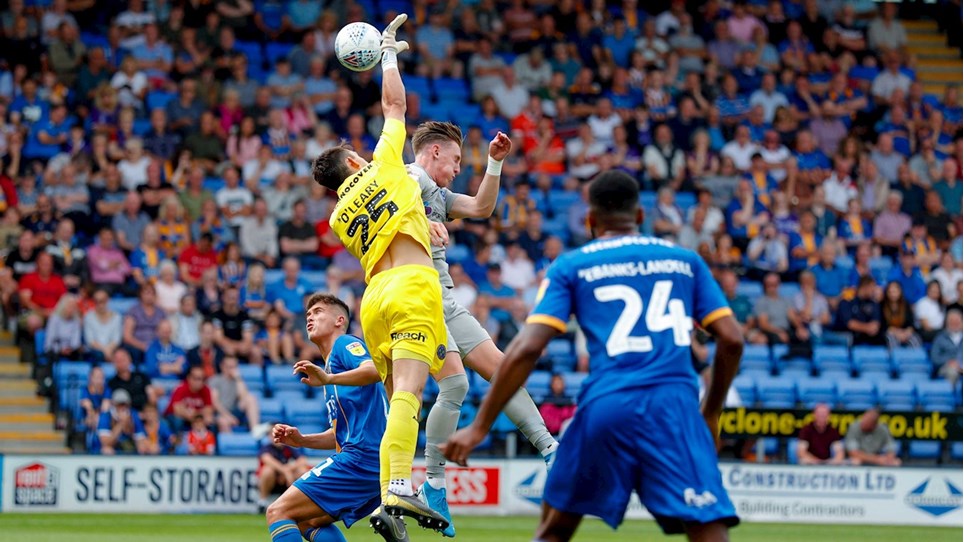 
Pompey suffered a frustrating start to the season, as they slipped to a narrow defeat at Shrewsbury.

Downing: We Won't Get Carried Away With Defeat


Paul Downing admitted that it was a disappointing way to make his competitive Pompey debut. Jackett: We Didn’t Cause Enough Problems


Pompey had 63 per cent of possession in their opening game of the season at Shrewsbury.

by Neil Weld at New Meadow

Pompey began the new League One campaign with a narrow defeat to Shrewsbury, despite dominating possession at New Meadow.

The game was short of clear-cut chances and it took a fine second half strike from Ryan Giles to settle the contest.

And Ross McCrorie was then sent off on his debut to cap a disappointing opening day for the Blues in Shropshire.

And there was a second Blues bow for striker John Marquis, who had a short spell on loan at the club in 2013.

Former Shrewsbury full-back James Bolton had to be content with a place on the bench, as did striker Ellis Harrison.

Brett Pitman was also named among the substitutes, so Gareth Evans claimed the captain’s armband.

It was not surprising to see a disjointed start to the action so early in the campaign, with the visitors enjoying territorial advantage, but not creating any clear-cut openings.

Downing thought he was fouled at the far post when trying to meet Lee Brown’s corner, although referee Charles Breakspear did not agree.

Pompey had a large share of the possession and were just lacking a final pass in key areas of the pitch.

McCrorie shanked a volley from the edge of the box and when the ball came back to him, the on-loan midfielder saw his second attempt gathered by Shrews stopper Max O’Leary.

The Blues were growing frustrated as the half progressed, feeling that decisions were going against them.

Shrewsbury then had a great chance when veteran striker Steve Morison controlled the ball neatly and volleyed narrowly over the bar.

Pompey were still angry about failing to get some free-kicks, leading to fouls from Anton Walkes and Gareth Evans that earned the pair bookings in quick succession.

They brightened up as half-time neared, however, and several deliveries into the area were well dealt with by O’Leary.

Marquis also had a couple of long-range shots blocked, as the hosts ensured it was goalless at the interval.

Pompey looked to get at their hosts following the restart, but were still finding it hard to test O’Leary.

A fizzing Brown cross did cause alarm when it drifted towards goal and the keeper had to palm the ball to safety.

Jackett soon decided to make a double substitution, with Evans and Anton Walkes replaced by Pitman and Bolton.

A free-kick from Brown – after Ethan Ebanks-Landell was booked for barging Marquis to the ground – was flicked on by Tom Naylor and deflected behind.

And the free-kick conceded from the second of those led to Shrewsbury opening the scoring on 68 minutes.

Giles received the ball and hit a rocket of a shot from long-range that left Craig MacGillivray helpless against his former club.

Pompey tried to hit back and Pitman instinctively stuck out a boot to meet Bolton’s cross, only to see the ball land safely in O’Leary’s arms.

And they almost found an equaliser when Brown played a clever free-kick to Marquis, who had broken away from a packed box to receive the ball.

He sent the ball towards the net, but Aaron Pierre slid in to somehow turn the ball just past his own post.

Jackett made his final throw of the dice soon after, with Harrison coming on for his debut in place of Bolton.

But the Blues were soon down to 10 men, with Breakspear deciding that McCrorie had caught Donald Love late and showing the Scot his second booking.

They threw men forward in search of a leveller, although Shrewsbury were holding firm at the back to repel them.

There was six minutes of added time to give the travelling army of Pompey fans hope of some late drama.

And it almost arrived when Brown sent a low ball across the face of goal that nobody was able to get a touch on.

A corner was then cleared only as far as an unmarked Curtis in the box, but he fired over and that proved to be the final chance.


Pompey suffered a frustrating start to the season, as they slipped to a narrow defeat at Shrewsbury.

Downing: We Won't Get Carried Away With Defeat


Paul Downing admitted that it was a disappointing way to make his competitive Pompey debut.

Jackett: We Didn’t Cause Enough Problems


Pompey had 63 per cent of possession in their opening game of the season at Shrewsbury.

Tickets for Pompey’s season-opening visit to Shrewsbury go on sale next week.

Blues fans have been given an allocation of 1,600 seats in the DM Recruitment Stand for the League One contest.

Subject to availability, tickets will then be placed on general sale from 9am on Tuesday, July 9.

Wheelchair and ambulant tickets are priced £15 and include a carer if on the highest rate of DLA or PIP.