And now a rivalry is starting to develop with Sunderland in the third tier, as both sides continue to battle for a return to the Championship.

There were five closely-fought meetings between the cross-country giants last term, with both sides enjoy joy and despair.

It was the men from the south coast who triumphed at Wembley following a penalty shoot-out to lift the EFL Trophy.

But the Black Cats got their revenge by edging a two-legged play-off encounter, even if heartache followed against Charlton in the final.

Now the latest chapter of an epic tale is about to take place on Wearside, with television cameras on hand to beam the action live around the world.

And it was ultimately their failure to convert draws into wins that cost them promotion, with an incredible 19 games finishing all square.

So supporters might be worried that their first two games of the current campaign – against Oxford and Ipswich – ended 1-1.

They did break their duck earlier in the week, however, with a 3-1 success at Accrington in the Carabao Cup.

TEAM NEWS
James Bolton has returned to full fitness for Pompey, but Oli Hawkins is out of action with a slight foot injury.

Glenn Loovens, Ethan Robson and Duncan Watmore are all on Sunderland’s injured list, but Denver Hume and Dylan McGeouch are back in contention.

TICKETS
Pompey fans will be able to buy tickets at the Stadium of Light on the day of the game. Click here for more information.

MATCH COVERAGE
iFollow subscribers can listen to live commentary from Andy Moon and Guy Whittingham by signing into their account and visiting the match centre from 12pm on Saturday.

BETTING
Sunderland are the 6/4 favourites with Sky Bet to secure all three points, while the Blues can be backed at 19/10.

ALSO IN LEAGUE ONE
All matches kick-off at 3pm 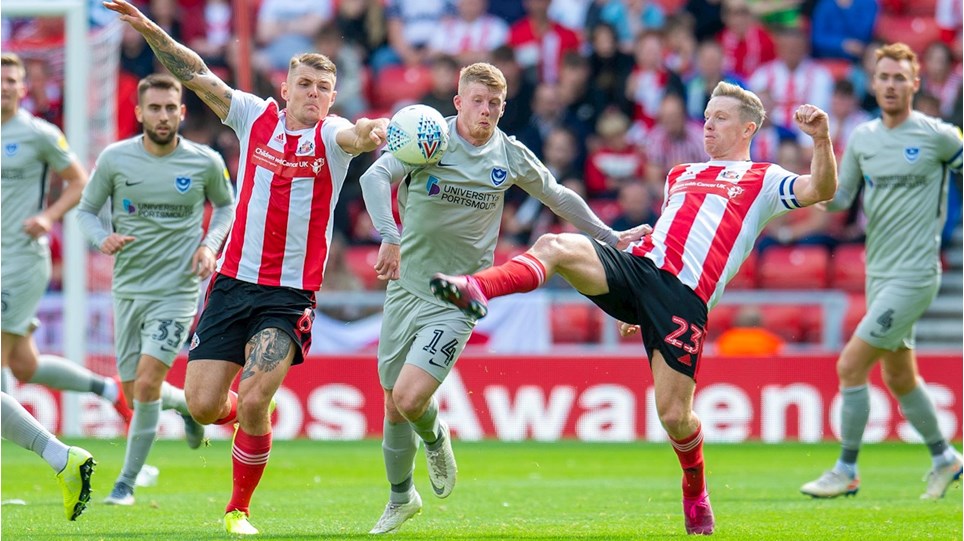 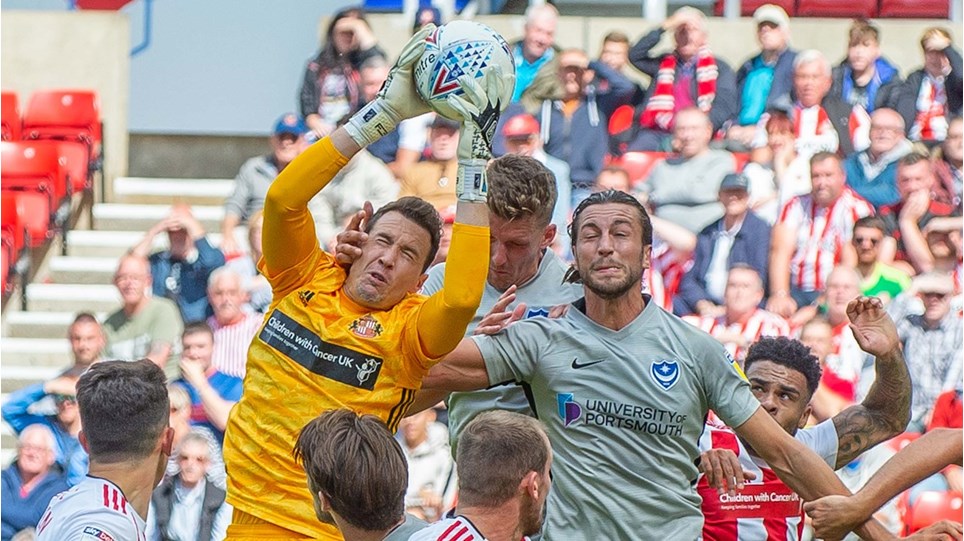 
Pompey suffered a narrow defeat to Sunderland in the latest clash between the sides at the Stadium of Light.


One man had something to smile about as Pompey made their way home from the Stadium of Light. 
Kenny Jackett has often underlined the importance of set-pieces for Pompey.

Pompey suffered defeat in their latest encounter with familiar foes Sunderland, despite taking the lead in the north-east.

A first goal for Marcus Harness since his summer switch from Burton broke the deadlock – and the Blues were good value for their lead.

But the Black Cats had turned things around by the interval, with Jordan Willis heading a leveller before Chris Maguire struck against his former club.

There were chances for the visitors to leave with at least a share of the spoils, but Sunderland held on for the win.

Kenny Jackett made one change from the side that beat Tranmere on home soil the previous weekend.

John Marquis returned to the starting line-up to lead the line, with Ellis Harrison dropping to the bench.

Former Blues loanees Marc McNulty and Maguire both featured for the hosts, with the latter having scored the decisive goal in last season’s play-off clash.

It was Pompey who made the brighter start and a cross from Anton Walkes in the opening seconds was diverted over by Ronan Curtis.

Ben Close has netted a couple of recent stunners and tried his luck with another 30-yard effort, although this time the ball narrowly cleared the crossbar.

Then, after Marquis had done well to win a corner on the right, Lee Brown’s delivery was cleverly collected by Jon McLaughlin.

The Sunderland stopper soon had to come racing from his line to stop Marquis latching onto Close’s fine pass.

And the visitors made their dominance count by breaking the deadlock midway through the first half.

Harness played a neat one-two with Marquis and was unable to dig out a shot, with his team-mate also failing to make a clean connection at the second attempt.

But the ball fell for HARNESS and he made no mistake, sweeping home a shot to open his goalscoring account for the club.

The lead did not last long, however, as Willis charged into the box to powerfully convert a Grant Leadbitter corner.

Both sides were looking capable of adding to the scoring as the half progressed, although it was the hosts celebrating on 39 minutes.

Walkes tried to stop Aiden McGeady, but his interception ricocheted against the winger, who continued his charge

The Irishman then played a lovely pass across the face of goal, with Maguire there to slot past a helpless Craig MacGillivray.

The hosts did receive a blow soon after the restart, as McNulty went down injured and was unable to continue, with Charlie Wyke on to replace him.

Pompey were looking for a leveller, but Curtis could not find the target after rising to meet Walkes’ right-sided delivery.

They had a better chance when the visitors won position and Harness slipped a neat pass through to Marquis, who was unable to find the target.

And a spell of intricate short passes led to Brown finding the ball on the left, although his cross was not quite right for Harness.

Brown soon received the ball back again, though, and this time could not beat McLaughlin from a tight angle.

Luke O’Nien wanted a penalty at the other end after going down under pressure from Tom Naylor, but his appeals were immediately dismissed by referee Michael Salisbury.

And the official was equally unimpressed just moments later, when Maguire decided to theatrically hit the turf.

Jackett made a double switch just past hour mark, with Curtis and Andy Cannon making way for Harrison and Gareth Evans.

There was then a nervy moment as the ball flew around the Blues box and could not be cleared, but the danger eventually passed.

And he immediately released Marquis with a great pass down the right. The striker squared for Evans, whose goal-bound effort was blocked by Alim Ozturk.

A cross from McCrorie was then diverted towards his own net by Leadbitter, but McLaughlin was able to claw the ball to safety.

Pompey continued to control possession as the seconds ticked down, although Sunderland remained resolute to see the game out.


Pompey suffered a narrow defeat to Sunderland in the latest clash between the sides at the Stadium of Light.


One man had something to smile about as Pompey made their way home from the Stadium of Light.


Kenny Jackett has often underlined the importance of set-pieces for Pompey.

Tickets are still available for Pompey’s League One match at Sunderland on Saturday.

Blues fans have already snapped up around 800 seats for the Stadium of Light contest, which kicks-off at 12.30pm and is being screened live on Sky Sports Football.

Supporters will also be able to visit cash turnstile number 71 at Sunderland on the day of the game if they are buying adult tickets.

Those wanting to pay by card or buy concession tickets should instead visit the Stadium of Light ticket office.

That is also the location for Pompey fans who are collecting tickets. 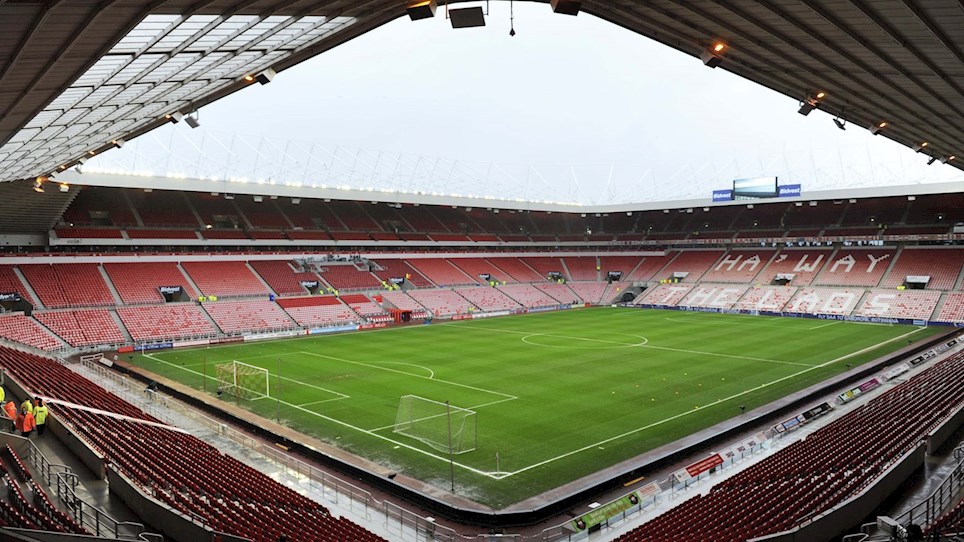 
Tickets for Pompey’s League One match at Sunderland go on sale next week.